Charles Sherrington was the first to describe decerebrate rigidity in 1898.  Also known as extensor posturing, decerebrate rigidity is a term that describes the involuntary extensor positioning of the arms, flexion of the hands, with knee extension and plantar flexion when stimulated as a result of a midbrain lesion.[1] Decerebrate posturing is a tonic, static reflex that is maintained by the reticular formation and vestibulospinal system. The lesion is often in the midbrain between the red nuclei and lower vestibular nuclei; therefore, the remaining description will focus on the anatomy of the midbrain and related ascending and descending white matter tracts that lead to extensor posturing when damaged.

Understanding the pathology of decerebrate rigidity requires a thorough understanding of normal anatomy and physiology in how the limbs flex and extend under voluntary control in response to a stimulus. Movement is a complex set of coordinated pathways that work together to produce the desired outcome. Ascending pathways carry sensory information to inform the cerebellum and cerebrum, which creates a motor response in the form of descending pathways that result in an intentional act of muscle flexion and extension.

The ascending afferent sensory pathway is known as the spinothalamic tract (also recognized as the anterolateral system) carries crude touch, pain, and temperature from tissue to the cortex via the spinal cord.[2] The nociceptor, a pseudounipolar neuron that has the cell body in the dorsal root ganglion outside the spinal cord, sends axons into the tissue. When tissue is damaged, molecules are released and activate the free ends of the nociceptors with slow unmyelinated fiber axons known as C fibers and faster fiber axons known as A-delta. These neurons and signals travel from the tissue to Lissauer tract, which moves up and down. C fibers synapse in the posterior horn of the spinal cord in the Rexed lamina II known as substantia gelatinosa of Rolando and lamina III and IV known as the nucleus proprius. Here they release excitatory neurotransmitters substance P and glutamate onto the second-order neuron creating an action potential.  This axon whose body lies in the grey matter will decussate in the anterior commissure and travel up as a white matter tract to the ventral posterolateral nucleus (VPL) of the thalamus where it will synapse with a third-order neuron to travel through the posterior limb of the internal capsule to reach various cortical regions. As it travels up through the medulla, pons, and midbrain, it will give off collateral fibers to the reticular formation.

Aiding in the motor movement are various subcortical motor pathways — those with a direct connection to the red nucleus part of this discussion. The vestibulospinal and the pontine reticulospinal tract assist in extension while the rubrospinal tract help facilitates flexion.[4] The vestibulospinal tract is mainly concerned with head and body posture. Vestibulochochealer nerves send information to the vestibular nuclei located in the medulla and pons. The tract then divides into the medial and lateral tracts. The medial tract originates from the medial vestibular nucleus in the medulla and controls movement for the head.  While the lateral tract stimulated by the fastigial nucleus of the cerebellum and contralateral vestibular nuclei, originating in the lateral vestibular nucleus in the pons will travel down ipsilaterally from the nuclei and synapse in Rexed laminae VII and VIII on interneurons and other alpha and gamma motor neurons to initiate extensor movements.  The fastigial nucleus in the cerebellum stimulates the vestibular nuclei of the lateral tract while the red nucleus (its color is thought to come from the iron of hemoglobin and ferritin) acts to inhibit.

The pontine reticulospinal tract originates in the reticular formation of the pons and receives stimulation from the ascending spinothalamic tract. It sends axons down ipsilaterally where it synapses in the ventral horn with alpha and gamma motor neurons that then travel to the respective extensor muscles.

The rubrospinal tract originates in the red nucleus located medially in the rostral tegmentum of the midbrain.[5] The red nucleus stimulation is from the cerebrum and cerebellum and has efferent fibers to the spinal cord, reticular formation, cerebellum, and inferior olive. Fibers from the red nucleus decussate and then travel down the spinal cord to synapse in the ventral horn lamina V, VI, and VII with alpha and gamma motor neurons that travel to flexor muscles.

Lesions that interrupt the fibers of the red nucleus lead to inhibition of the rubrospinal tract and constant excitation of the vestibulospinal and pontine reticulospinal tracts. This continued excitation results in extensor posturing when painful stimuli are applied. Most people who exhibit decerebrate posturing are also comatose as damage to the reticular formation tracts causes a decrease in normal function. The interruption of the corticospinal tract disrupts voluntary movement and inhibits a person from both perceiving and executing a normal movement. The spinothalamic tract will become disrupted as it moves through the area of the lesion. However, it continues to give off collateral fibers below the lesion to the reticular formation and other medullary and pontine nuclei.

Considering the area of damage that creates pathologic posturing, the midbrain contains the cerebral peduncles, the ventral tegmentum, and the dorsal tectum, and cerebral aqueduct. The midbrain forms from interaction with the sonic hedgehog signaling pathway, WNT, En, and Pax genes.[6] At 25 days the anterior hollow neural tube’s second vesicle is known as the mesencephalon (mes meaning “middle”) which does not differentiate into other divisions. The spinal cord develops from the posterior neural tube.

Craniectomy may be an option in the setting of acute herniation due to increased intracranial pressure.[9] Brain Trauma Foundation Guidelines recommend that the frontotemporoparietal craniectomy be at least 15 cm in the anterior-posterior diameter. While this procedure may reverse the acute herniation and result in resolution of the extensor posturing, it will not reverse permanent lesions found in the midbrain that have resulted in axon death.

Decerebrate rigidity is due to a lesion of the midbrain.[10] It results in exaggerated extensor posturing in the extremities, including the neck along with lower limb hyperreflexia, and carries an ominous prognosis. Trauma is the most common cause of midbrain lesions. Subdural and epidural hematomas and edema can lead to herniation and compression on the brain stem. On the Glasgow Coma Scale under the motor assessment, the patient would receive 2 points.[11] Other causes of decerebrate rigidity are lesions that compress the midbrain, midbrain hemorrhages, and basilar artery occlusion. 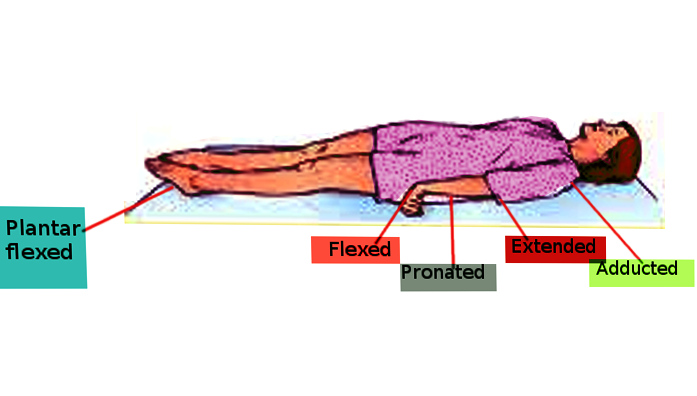