Adenomyosis is a gynecologic condition characterized by ectopic endometrial tissue within the uterine myometrium. Presenting signs and symptoms vary, but most commonly are painful menses and/or heavy menstrual bleeding. This activity reviews the evaluation and management of adenomyosis and highlights the role of the interprofessional team in caring for patients with this condition.

Adenomyosis is a gynecologic condition characterized by ectopic endometrial tissue within the uterine myometrium. First described in 1860 by the German pathologist Carl von Rokitansky, the histopathologic finding was termed “cystosarcoma adenoids uterinum.”[1] Presenting signs and symptoms vary, but most commonly are painful menses and/or heavy menstrual bleeding. Historically, the condition was a histologic diagnosis that required biopsy or more often hysterectomy. Presently, the diagnosis can be made non-invasively using ultrasound or magnetic resonance imaging (MRI). The definitive treatment for women who no longer desire pregnancy is hysterectomy, while a variety of other medical and minimally invasive therapies are available for those who want to preserve fertility or want to avoid more extensive surgery.

While the histology is well-described, the etiology of adenomyosis is not known definitively. Researchers have postulated several theories. The most commonly accepted theory is that adenomyosis results from a disrupted boundary between the deepest layer of the endometrium (endometrium basalis) and the underlying myometrium. This process leads to a cycle of inappropriate endometrial proliferation into the myometrium with subsequent small vessel angiogenesis as well as adjacent myometrial smooth muscle hypertrophy and hyperplasia. Data demonstrating a higher prevalence of adenomyosis following dilation and curettage and cesarean section support this theory.[2][3]

Accurate demographics and disease prevalence are unclear due to previous underreporting and under-diagnosis. Estimates range from 5% to 70% with more recent data suggesting a prevalence of 20% to 35%.[8][9] Classically, adenomyosis is described as a disease of pre-menopausal, multiparous women in their thirties to forties; however, this reflects the inherent bias towards women undergoing a hysterectomy. Improvements in the diagnostic ability of ultrasound and MRI criteria have led to more insight about affected populations.

A rare form of the disease, termed juvenile cystic adenomyosis, is characterized by more extensive hemorrhage within myometrial cysts and is typically seen in women younger than 30. Symptoms are typically refractory to medical therapy and require surgery, either myomectomy or hysterectomy.[10][11]

Inappropriate endometrial tissue proliferation within the myometrium leads to symptoms through a variety of mechanisms. Normal endometrial tissue is responsible for prostaglandin production which drives the contractions of menstruation. Ectopic foci of adenomyosis lead to increased levels of prostaglandins which result in dysmenorrhea which characterizes the disease. Estrogen also drives endometrial proliferation, which medical therapies aim to reduce.

Heavy menstrual bleeding is thought to be caused by a combination of factors which include increased endometrial surface area, increased vascularization, abnormal uterine contractions, and increased cell signaling molecules such as prostaglandins, eicosanoids, and estrogen.[8][12][13][14]

Histologic diagnosis of adenomyosis is the presence of endometrial stroma and glandular tissue within the smooth muscle of the myometrium. Different definitions of the required depth of invasion exist, some using an absolute measurement between 2.5 to 8 mm while others use a percentage. Additionally, several histologic grading classifications attempt to characterize the burden of disease.[9] Overall, the histologic diagnosis is not entirely standardized and significantly affected by the quality of tissue sampling.

The clinical diagnosis of adenomyosis is difficult as a variety of common gynecologic conditions share the signs and symptoms. The most common symptoms include heavy menstrual bleeding or painful menses. Clinical diagnostic accuracy is neither sensitive nor specific.[9] Other less common symptoms include chronic pelvic pain and dyspareunia.[8] It is also crucial to note that up to 33% of women with adenomyosis may be asymptomatic.[8] While infertility is often considered a potential presenting symptom, the data is inconclusive with some sources reporting an association of 11% to 12% with adenomyosis.[8]

The physical exam classically demonstrates a “boggy” enlarged uterus due to the combined effects of increased vascularization from ectopic endometrial tissue and smooth muscle proliferation. As compared to the enlarged leiomyomatous uterus, a tender uterus is more common.[15]

Laboratory testing is useful to rule out other disease entities included in the differential diagnosis, in addition to identifying certain complicating features such as anemia due to heavy menstruation. While some biomarkers do exist, none are specific for adenomyosis.[9]

Imaging is the primary means of making the diagnosis. Previously the preferred modality was MRI; however, recent data has shown the transvaginal ultrasound to match the sensitivity and specificity of MRI (89% sensitivity, 86% specificity).[16] The availability of ultrasound and the increased costs of MRI have led to ultrasound becoming the preferred modality for the initial evaluation, reserving MRI for equivocal cases.[17]

Transvaginal ultrasound is the preferred diagnostic imaging modality for adenomyosis. The characteristic findings reflect the histopathologic changes of the disease process and can be broken down into three categories:

A number of mimics can have similar findings on the ultrasound exam, including tamoxifen use, prior endometrial ablation, endometriosis, uterine contractions, vascular malformations, leiomyomas, and cancer. Certain techniques such as low-frequency, coronal reconstructions, 3-D ultrasound, cine-clips, color Doppler, and saline infusion sonohysterography (SIS) can be used to differentiate between these entities.

The first consideration in treatment selection is the desire for fertility, which will guide treatment considerations. Hysterectomy is the definitive cure. The remaining options target the primary symptoms of heavy, painful menstrual bleeding while preserving the uterus.

Nonsteroidal anti-inflammatory drugs (NSAIDs) are one of the primary medical therapies. These medications target the cyclooxygenase enzyme which produces the prostaglandins responsible for painful cramping during menstruation.[8][20]

Various hormonal therapies are available which include oral contraceptive pills (OCPs), levonorgestrel intrauterine device (IUD), danazol, and aromatase inhibitors. These therapies aim to reduce the estrogenic effects which lead to endometrial proliferation. Data to support a particular therapy lack well-powered randomly controlled trials (RCTs); however, levonorgestrel IUDs are generally considered to be the primary therapy due to decreased side effect profile and overall success rates.[8][21][22]

Several interventional radiologic procedures exist which may be options for the patient who fails medical therapy but desires future fertility. MRI-guided and ultrasound-guided high-intensity ultrasound thermal ablation can be done to target focal disease.[23][24][25] Uterine artery embolization reduces blood flow to the uterus as a whole, thereby inducing necrosis leading to an overall reduction in uterine size.[26][27][28] These therapies show promise but require additional data on direct treatment comparisons and long-term outcomes.[9] While these therapies aim to preserve fertility, infertility is an understood risk.

Endometrial ablation may be considered in patients who do not desire future fertility but prefer a less invasive alternative to hysterectomy. Limitations include the inability to target deeper adenomyotic foci due to its superficial approach.

Myomectomy and partial hysterectomy are more invasive options that aim to preserve fertility. These options allow for targeting of deeper foci; however, subsequent scarring may lead to disease recurrence as the endometrial-myometrial interface is disrupted, a risk factor for adenomyosis. Additional considerations include the potential for future pregnancy complications due to altered uterine anatomy with an increased risk of uterine rupture, premature rupture of membranes, premature labor, and spontaneous abortion.[8][9]

The differential diagnosis of adenomyosis is broad. The signs and symptoms of adenomyosis are similar to other disease entities characterized by abnormal uterine bleeding, dysmenorrhea, or infertility. The Federal International Board of Gynecology (FIGO) classification scheme utilizes the PALM-COEIN mnemonic as a clinical tool for more consistent reporting practices.[9][29] The mnemonic divides the diagnosis of abnormal uterine bleeding into structural and non-structural categories with each letter representing the following entities:

Adenomyosis often co-exists with other entities within the differential diagnosis, most commonly leiomyoma (50%), endometriosis (11%), and endometrial polyps (7%).[8][30]

Adenomyosis is a difficult diagnosis to manage as multiple clinical factors must be considered, including fertility, confidence in diagnosis, side effects of medical management, and risk of invasive procedures. Recent data showing an increased prevalence of adenomyosis in younger populations and asymptomatic patients reflects a spectrum of disease which is incompletely understood. Symptoms seem to correlate with the number of adenomyosis foci and the depth of invasion.[31] The consensus to treatment is a stepwise approach with medical therapy to include anti-inflammatory and hormonal agents with progression to minimally invasive procedures such as endometrial ablation/myomectomy or uterine artery embolization. The definitive cure remains hysterectomy.

The correlation between adenomyosis and infertility is not clearly defined. While some authors cite an association of 11% to 12%, contradictory data also exists.[8] Due to a multitude of confounders and variable diagnostic criteria for adenomyosis, no clear association has been established.[9]

With more validated diagnostic imaging criteria of ultrasound in recent years, future research will be able to characterize associations between adenomyosis and infertility more confidently.

It is essential that patients understand adenomyosis can be a challenging condition to diagnose and treat. The drivers of treatment options are the burden of disease (correlates to a depth of invasion) and preferences regarding future fertility. Additionally, adenomyosis often co-exists with other gynecologic conditions which further complicates treatment planning. While certain minimally invasive therapies exist and data shows promising results, these procedures (ultra-high frequency ultrasound, uterine artery embolization, etc.) are not validated using well-powered randomly controlled trials with unknown long-term outcomes.

Ultrasound is the preferred diagnostic imaging modality for the initial workup of adenomyosis with high sensitivity and specificity. MRI can be helpful in equivocal cases.

Diagnostic imaging utilizing either ultrasound or MRI has some limitations due to numerous mimics and variable physiologic appearance of the uterus.

Treatment options should target primary symptoms. NSAIDs for painful cramping, OCPs or levonorgestrel IUD for heavy bleeding, and hysterectomy for women no longer desiring fertility. Minimally invasive therapies should be a consideration in refractory cases in women who wish to preserve fertility.

Adenomyosis can co-exist with leiomyoma (50%), endometriosis (11%), and endometrial polyps (7%). These associations merit attention in patients who have refractory symptoms.

Up to a third of women with a sonographic diagnosis of adenomyosis may be asymptomatic.[17]

While adenomyosis is classically taught as a disease of premenopausal, multiparous women, there is data showing an increased prevalence in undiagnosed younger populations.

Utilization of the PALM-COEIN mnemonic can be used to broaden the differential diagnosis for abnormal uterine bleeding.

Adenomyosis is a problematic diagnosis due to its variable presentation and shared features with other common gynecologic conditions. The primary care clinician, obstetrician, nurse practitioner, gynecologist, diagnostic radiologist, and interventional radiologist are all possible team members who might diagnose and manage this disease. While the differential diagnosis is broad for women presenting with abnormal uterine bleeding, a transvaginal ultrasound which is the diagnostic imaging of choice for adenomyosis will likely be obtained during the initial workup. It is important to recognize that every test has its limitations to include the ultrasonographer and interpreter. It is vital that the ordering provider does not dismiss the diagnosis of adenomyosis if it is not mentioned in the report, as the diagnostic criteria have been variable for many years until the recent establishment of more standardized imaging features.[17]

For patients who are refractory to the standard medical therapies and desire future fertility, minimally invasive therapies offered by gynecologists or interventional radiologists should be an option. Recent data show promising results, but data demonstrating head-to-head comparisons and long-term outcomes are still lacking.

Similarly, medical therapies beyond the most commonly used levonorgestrel IUD and OCPs have yet to be validated and should only be used in refractory cases and under the supervision of a clinician who understands the hormonal side-effects of these medications.

Regardless of the course of treatment and severity of the disease, an interprofessional approach with collaboration between clinicians, nursing, and pharmacy is the optimal approach to ensure the best patient outcome. [Level 5] 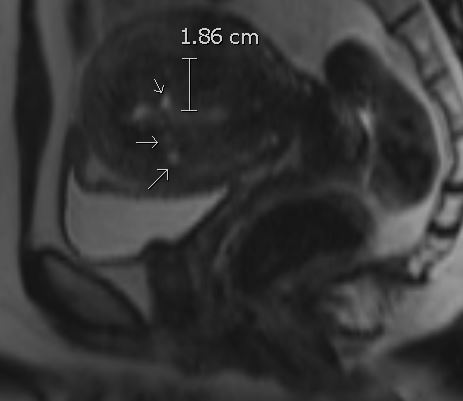 Liang E,Brown B,Kirsop R,Stewart P,Stuart A, Efficacy of uterine artery embolisation for treatment of symptomatic fibroids and adenomyosis - an interim report on an Australian experience. The Australian     [PubMed PMID: 22221154]