The inferior epigastric artery (IEA) branches off external iliac artery above the inguinal ligament and curves upward under the peritoneum. It passes behind the spermatic cord as the vas deferens emerges posteriorly then lateral to the artery. At this level, the inferior epigastric vessels form the lateral aspect of the Hesselbach triangle. The rectus abdominis muscle and inguinal ligament make up the medial and inferior borders of the triangle, respectively. It then ascends oblique and medially along the margin of the inguinal ring while being enveloped by the lateral umbilical ligament. It pierces transversalis fascia as it continues to ascend superior and superficially until it levels posterior to rectus once it crosses the linea semicircularis. The inferior epigastric artery continues to rise superiorly until it terminates by piercing rectus abdominis musculature and branching at approximately umbilicus level to form an anastomosis with superior epigastric arteries. This variability becomes vital for surgical consideration as we will later discuss.[2]

The superficial epigastric artery functions as its name suggests, which is to supply superficial fascia of the lower abdomen. It branches off the femoral vein about 1 cm inferior to the inguinal ligament, pierces cribriform fascia, and travels superiorly and superficially between abdominal fascia toward umbilicus and usually terminates before it reaches the umbilical level as it anastomoses with inferior epigastric artery after it pierces the rectus muscle.[3]

While there are no nerves that follow the path epigastric arteries like veins and lymph nodes, there are nerves that are significant due to anatomical proximity. On the anterior abdominal wall, lateral cutaneous veins from T7 to T12, iliohypogastric, and ilioinguinal branches of L1 nerves run from lateral to the medial aspect of abdomen superficially near the skin, indirectly and more superficially crossing perpendicular to the epigastric arteries at respective dermatome levels. In the pelvic area, both the femoral nerve and obturator nerve travel close to the inferior epigastric artery.

Angiogenesis begins at day 17 of embryo life at the splanchnic mesoderm of yolk sac wall, and later the paraxial mesoderm as vasculogenesis progresses. The process initiates with hemangioblasts, which divide into two categories: primitive hematopoietic progenitor cells (HPCs) and endothelial precursor cells (EPCs, or otherwise known as angioblasts). Hematopoiesis begins at the yolk sac of extraembryonic mesoderm, and flattened EPCs initiate vasculogenesis at the embryonic discs. Hematopoietic stem cells (HSCs) arise from intraembryonic splanchnic mesoderm as blood islands then join the liver for expansion before relocating to bone marrow and other lymphatic organs as the embryo matures. The products eventually flow to vessels known as arteries, veins, and capillaries.

EPCs form the “tubes” or vessels that eventually become arteries and veins through which blood can circulate. They develop and differentiate based on the factors excreted by EPC cells. Vessels form via angiogenesis and vasculogenesis. Flattened EPCs form, migrate, and coalesce in the process of vasculogenesis. The cells then bud and sprout to new vessels from existing endothelial cords in the process of angiogenesis. Vascular intussusception then occurs to separate the blood vessels, and finally, existing vessels are walled off via intercalation.

As angiogenesis is taking place, a primitive heart tube begins to form at day 18 as well. By week 4, body folding carries the primitive heart tubes to ventral thorax while the aortic arches start to develop and elongate in a craniocaudal succession. Of importance to note is the dorsal aorta outflow tract bilaterally that fuses midline by the end of the fourth week. Dorsal aorta eventually develops ventral, lateral, and posterolateral branches.

The ventral branches are significant for the vitelline system in the yolk sac wall and are divided to the abdominal foregut, midgut, and hindgut and mature into the body’s gastrointestinal arteries. Lateral branches of the descending dorsal aorta become vasculature supplying suprarenal glands, gonads, and kidneys. Posterolaterally, vasculogenesis occurs from paraxial mesoderm located between developing somites and eventually fuses with dorsal aorta. These branches are known as intersegmental branches and are visible along cervical, thoracic, and lumbar region by the end of the third week of embryology development. Some examples of intersegmental vessels include intercostal and vertebral arteries and veins. Intersegmental vessels then continue to expand its network to form multiple anastomoses with each other through the process of vasculogenesis and angiogenesis. Among these numerous anastomoses of the intersegmental vessels are the internal thoracic, superior and inferior epigastric arteries and veins.

The course of epigastric arteries on the abdominal wall slightly varies among different individuals. The SEA is found 3 to 8.5 cm lateral to the midline of abdomen bilaterally. The IEA can be 4 to 8 cm from midline regardless of body fat habitus or levels.[9] Findings by Rao et al. suggested, however, the arterial strips were not always equidistant from midline on the left and right sides. They found that the right IEA could be  3.2 to 6 cm from the midline, and the left IEA had a range of 1.2 to 5cm from the midline.  The IEA takes a medial to lateral path as it ascends from the inferior abdominal wall towards the umbilicus.[10]

Surgically, it is vital to note the course of epigastric arteries along the abdominal wall for many procedures such as trocar placement in laparoscopic surgeries, percutaneous endoscopic gastronomy (PEG) tube placement, inguinal hernia repair, paracentesis, and drain placement during cardiothoracic surgery. Disruption of the epigastric arteries can lead to failure in future procedures where superior epigastric artery may be used for arterial perforation, such as in a trans-rectus abdominis muscle (TRAM) flap or sternal reconstruction procedure. Bleeding may result in abdominal wall hematoma formation, leading to post-op complications such as infection, incisional hernia formation, or severe blood loss depending on where arterial transection occurs.[11]

Though trocar and cannula placement is safe, it may injure blood vessels of the anterior abdominal wall, more so to the inferior epigastric artery. These injuries occur in 3 of 1000 (or 0.2-2%) of laparoscopic cases. In these cases, there is a risk of bleeding, which is controllable with either direct pressure, wall suture ligation, or tamponade with a Foley catheter balloon through the insertion site. It is also controllable with a two-handed technique, where the vessel is clamped or compressed with an instrument with one hand and ligated, clipped, or coagulated with the other. If these measures fail, the surgeon must perform a wound exploration which leads to unnecessary prolongation of procedure, in which the patient needs to be under anesthesia for an extended period, or even a possible conversion to laparotomy, delaying post-op wound healing among the other complications listed above.[12][13][14]

Many surgeons may use transillumination technique to visualize significant vessels through the skin to avoid piercing the area with a trocar. However, this is difficult in dark-skinned patients and patients with a high body mass index. A study by Quintet et al. showed that vessels were visualized using transillumination technique in only 63% of 103 patients studied.[1] CT angiography would be the study of choice to map vessels pre-operatively but is not always feasible due to cost and exposure of patients to unnecessary radiation. The consideration should be that these abdominal wall vessel injuries are manageable intraoperatively. It is, therefore, better to have surgeons understand the anatomy and know which anatomical zones are safe or dangerous to pierce with their instruments.

“Safety” and “danger” zones have been defined by various studies in cadavers in different countries. Bhatti et al. defined the “danger zone” of the superior epigastric artery to be 3 to 8.5 cm lateral to midline and “safety zone” to be from midline to 3cm immediately adjacent to midline bilaterally on the abdomen.[1]Saber et al. found that IEA vessels are found 4-8 cm from midline regardless of body fat habitus.[9] Rao et al. in India as mentioned earlier suggested the arterial strip was not equidistant from midline on the left and right side of the abdomen. They suggested the safety zone of the IEA to be 0 to 3.2cm from midline and 0 to 1.2cm on the right. The IEA as they had found was located more laterally on the abdominal wall on the right then left, especially as it courses upwards toward the umbilicus. The “danger zone” as they defined was at 3.2 to 6cm from midline on the right and 1.2 to 5cm from midline on the left.[10] It has also now known that the midline is avascular and main stem of the IEA can is avoidable if trocars are inserted 2/3 distance between midline and ASIS. Branches of IEA were found to be least at lower abdomen lateral the artery.[15] 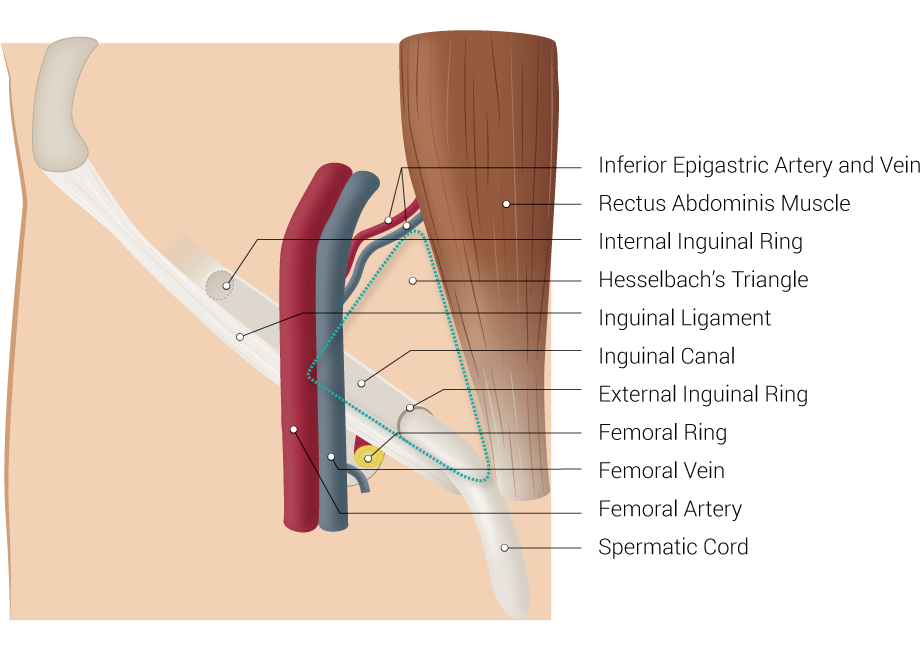