While major burns can cause considerable local damage and tissue injury, they can also result in a widespread inflammatory response that may affect the entire body. With this in mind, the severe burn patient should always be handled systemically, with primary attention to the patient’s ABC’s (airway, breathing, and circulation). To learn more about the initial approach to severe burn injuries, take a look at the "Burns, Evaluation and Management" section. This section will focus specifically on fluid resuscitation in the critical burn patient. Once airway and breathing have been addressed, the next step in the algorithm is to assess circulation. Early and aggressive fluid resuscitation plays a fundamental role in the management of circulation in severe burn patients.

Severe burn injuries trigger activation of the complement system and release of inflammatory and vasoactive mediators. These mediators increase local and systemic capillary permeability, leading to the rapid displacement of intravascular fluids, electrolytes, and plasma proteins into the interstitial space. This extensive capillary leak results in large fluid shifts, intravascular fluid depletion, and significant edema of both burned and non-burned tissue. This response can begin within minutes and rapidly transpires over the first 24 hours after the injury occurs. Maximum intravascular hypovolemia and edema formation peaks at about 8–12 hours post-injury. Massive systemic fluid loss, accompanied by decreased cardiac output and increased vascular resistance, eventually lead to critical hypoperfusion and subsequent tissue injury. This phenomenon, known as “burn shock,” is a combination of distributive, hypovolemic and cardiogenic shock, and is treated with aggressive fluid resuscitation. The aim of fluid management in severe burn injuries is to maintain tissue perfusion and prevent end-organ ischemia in the earliest phases of burn shock. Prompt and adequate fluid resuscitation has consistently shown to decrease morbidity and mortality in victims of severe burns. This improvement in outcomes has led to the development of many resuscitation protocols that aid in calculating initial fluid requirements. The Parkland formula, originated by Baxter and Shires in 1968, remains the most well-known and widely used regimen to date[1][2]

The Parkland formula is used to calculate fluid resuscitation for critical burn patients. This formula is used specifically for patients who have sustained large deep partial thickness or full-thickness burns of greater than 20% of their total body surface area in adults, and greater than 10% total body surface area in children and the elderly. It is also useful for patients with smaller burns who sustained oral or inhalation injuries and are unable to tolerate fluids by mouth.

No absolute contraindications exist to use of the Parkland fluid. Initiation of fluid resuscitation is an option in patients with comorbidities such as heart failure and end-stage renal disease, with close monitoring of volume status. Oral hydration should be used in patients with smaller burns that can tolerate PO.

Like with any trauma or critical patient, two large-bore peripheral IVs should be placed immediately, preferably through unburned skin, although IVs placed through burned skin are acceptable. Peripheral intravenous access is the most efficient and least invasive way to administer high volumes of fluid. Peripheral IVs can be sutured in place to avoid losing access. If peripheral access is unattainable, central venous catheterization or an interosseous line must be a considered approach. It is important to remember that severe burn patients are often involved in trauma. Hypotension is often a late finding in burn shock. If a patient arrives hypotensive, always consider other traumatic causes of low blood pressure, such as hemothorax, cardiac tamponade, neurogenic shock, and internal abdominal and pelvic bleeding.

The first step in addressing the fluid needs for a burn patient is to determine the extent of the injury, which is by calculating the percentage of body surface area (%BSA) injured. Of note, only those areas suffering from deep partial-thickness burns (previously known as 2nd-degree burns) or a full-thickness burn (formerly known as 3rd & 4th-degree burns) are included in the calculation. Superficial partial thickness (1st-degree burns) should not qualify for inclusion. The "Wallace Rule of Nines" is the most common method of determining BSA. In the adult formulation, the head is 9%, each circumferential upper extremity is 9%, each circumferential lower extremity is 18%, the anterior trunk is 18%, the posterior trunk is 18%, and the perineum is 1%. This formulation is modified for the pediatric population due to the larger head size relative to the body. In the pediatric formulation, the head increases to 18% and lower extremities each decrease to 14%. For a more accurate calculation of %BSA, particularly with children, the "Lund and Browder Chart" can be utilized. This chart expands on the %BSA of the head and lower extremities by considering variations in age. For a quick approach to calculating %BSA,  one can use the "Rule of Palm." This rule states that the patient's palm, not including fingers or wrist, approximates 1% of their own BSA. Thus, a quick estimate of a patient's %BSA is obtainable by measuring the number of the patient's own palms it would take to cover their burn injury. The key here is to use the palm of the patient and not the palm of the provider.

The Parkland formula estimates the fluid requirements for critical burn patients in the first 24 hours after injury using the patient’s body weight and the percent of total body surface area that is affected by thermal burns. The formula recommends 4 milliliters per kilogram of body weight in adults (3 milliliters per kilogram in children) per percentage burn of total body surface area (%TBSA) of crystalloid solution over the first 24 hours of care.

Delivery of half the volume is in the first 8 hours post-burn, and the remaining volume given over the next 16 hours. Children should receive maintenance fluid in addition to their calculated fluid requirements. Of note, the first eight hours of resuscitation is from the time of burn injury, not from the time of evaluation. Thus, the first half of total fluid amount may need to be administered at a faster rate if the patient has a delayed time before evaluation. Lactated Ringers is the preferred choice of crystalloid solution, as it effectively treats both hypovolemia and extracellular sodium deficits caused by burn injury, and it is isotonic, inexpensive, readily available, and easily stored. Also, large volumes of normal saline solution can lead to hyperchloremic acidosis.[3][4][5][6]

Keep in mind that these formulas are meant to serve only as a guide for fluid resuscitation. Several studies have shown that the Parkland formula may underestimate fluid requirements for certain critical burn patients. Patients with inhalation injuries, electrical burns, full-thickness burns, and those in who experience delayed resuscitation are among the specific patient populations that frequently need more fluid than what is calculated by the Parkland formula. Under resuscitation with fluids can lead to unstable vital signs, acute renal failure, and further end-organ injury. Acute renal failure in burn settings may necessitate temporary dialysis. There is also emerging evidence that some severely burned patients with major burns receive far more fluid than is recommended by the Parkland formula. Over-resuscitation has been shown to increase complications such as abdominal and extremity compartment syndromes, cerebral edema, acute respiratory distress syndrome, a higher risk of sepsis, and multi-organ dysfunction. The term for this phenomenon is “fluid creep.”[7]

Managing fluids in burn and trauma patients are challenging. Several studies have concluded patients who receive larger volumes of resuscitation fluid may be at higher risk for complications and death. As such, the rates of the fluid administration in major burns are a focus of controversy. The Parkland formula offers a rational approach for adequate fluid resuscitation, however, the use of the formula must also include good clinical judgment.

The best single indicator of adequate fluid resuscitation in major burn patients is hourly urine output. Once IV access is established, and fluids initiated, placement of a Foley catheter should take place in order to monitor urine output. The fluid rate should be adjusted to maintain urine output between 0.5 and 1 mL/kg/hour in adults, and between 1.0 and 1.5 mL/kg/hour in children. Organ perfusion should also be evaluated by the patient’s heart rate, blood pressure via arterial monitoring, capillary refill time, and mental status. Patients who have an acceptable volume status and urine output, but remain hypotensive may require vasopressors or inotropic agents to improve cardiac output and maintain systemic perfusion pressures [Level 1].

Though sufficient fluid resuscitation is essential during the initial 24 hours after injury, burn patients must remain adequately hydrated throughout their entire recovery process. After 24 hours, fluid should be switched from Lactated Ringers to 5% dextrose in half normal saline (D5½NS), and given at a maintenance rate. Recent practice guidelines for burn shock resuscitation consider supplementation of colloid-containing fluid after the first 24 hours post-burn, as it has shown to decrease overall fluid requirements. During the second 24-hour  period, stop crystalloids and initiate colloids at 20-60% of calculated plasma volume and dextrose in water. A modified Parkland Formula provides more specific recommendations for the second 24 hours, advising colloid infusion of 5% albumin at the amount of 0.3-1.0/16 mL/kg/%BSA/hr [Level 1].[6][3] 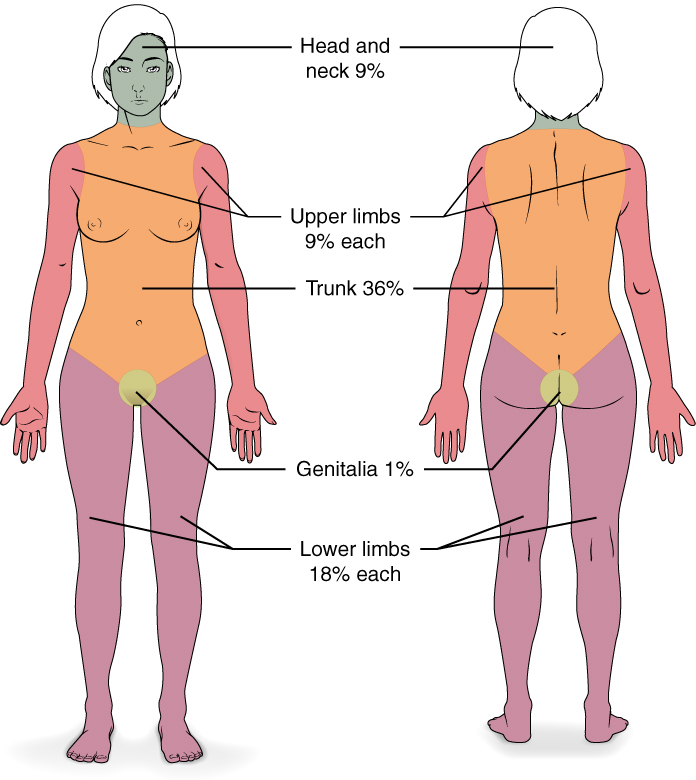