The heart has four chambers; the right and left atria and right and left ventricles. The heart also has valves that help with blood circulation, the mitral and tricuspid valves are called “atrioventricular” because of their location that is between the atriums and ventricles, and the aortic and pulmonary valves are the “arterioventricular” valves located between the ventricles and arteries. (Figure-1) The name of the mitral valve derives from the liturgical headgear (miter) of the Catholic/Christian tradition. The mitral valve also called bicuspid valve, is located between the left atrium and left ventricle and is composed of the mitral annulus, papillary muscles, anterior leaflet, and posterior leaflet and chordae tendinae, all these components form the valve apparatus which prevents the blood backflow from the left ventricle to the left atrium during systole, and during diastole allows normal blood flow from the left atrium to the left ventricle.[1]

The main feature of the mitral valve is the mitral apparatus, which is composed of the left atrial wall, left ventricle wall, the mitral annulus, the anterior and posterior leaflets, chordae tendinae and papillary muscles. The mechanical and metabolic balance of the valve is guaranteed by the presence of interstitial cells, which are very sensitive to mechanical information (mechanotransduction) and help in valve remodeling. The valve surface is rich in endothelial cells that communicate with interstitial cells to maintain the strength and shape of the valve.

Mitral annulus: The mitral annulus is a fibrous ovoid ring located around the mitral opening, it works as a sphincter; it contracts during systole and reduces the mitral valve area by completely closing the leaflets. At the posterior leaflet insertion, the mitral annulus is thinner than other parts of the annulus, making it more vulnerable to dilatation and resulting in inadequate leaflet closure. When severe dilation occurs, the leaflets are unable to approximate each other, and mitral regurgitation is the result.[2]

Leaflets: Unlike the tricuspid valve, the mitral valve has two leaflets, the anterior leaflet, and the posterior leaflet.

From the histological point of view, one can distinguish three layers in the leaflets of the mitral valve:

Finally, there is another very thin layer of elastic fibers on the ventricular side, in continuity with the elastic fabric of the chordae tendinae.

Are part of the subvalvular apparatus, the chordae tendinae are composed of fibrous strings that originate from the papillary muscles or the ventricle wall and that its insertion is into the ventricle, the anterior leaflet, posterior leaflet, and commissural leaflet. Two kinds of chordae tendinae are distinguished based on their insertion into the leaflets. The primary or marginal chordae are thinner and are attached to the leaflets at the free edge, preventing leaflet edge to prolapse for its characteristic of being high collagen fibers with reduced tension.[5][6] The secondary or intermediary chordae are thicker than primary chordae and are more extensible due to the more tightly collagen they have. The secondary chordae are attached to the ventricle aspect of the leaflets and help to reduce tension at the leaflet.[7][8]

The embryologic formation of the mitral valve is not well understood. It appears that the development of the most rudimentary valve starts after the tube heart has just developed after the second week of gestation.

The heart develops myocardial and endothelial layers that form an extracellular matrix. At the end of week 4 of fetal life, the extracellular matrix forms the basic four chambers, and by week 5, the outer part of the myocardial layer is compacted to form trabecular structures that will become the left ventricle. At this time,  the common atrioventricular canal and the cardiac cushions (lateral, superior, and inferior) can be detected.[9][10] The cardiac cushions are composed of fibroblast cells that are endothelial cells in the mesenchyme and form the endothelial-mesenchymal transformation.[9]

At week 5 of fetal life, the inferior and superior cushions fuse to divide into two portions, left and right, the common atrioventricular canal. When the superior and inferior cushion are fused, the anterior leaflet of the mitral valve forms and the left lateral cushions form the posterior leaflet.[11][10]

The main non-pathological anatomical variants are the presence of scallops (29.5%). The variations occur most commonly in the posterior area. The anterior mitral leaflet may have an accessory scallop (2.5%).

Mitral Regurgitation is associated with an abnormal backflow of blood from the left ventricle to the left atrium. In developed countries, the main cause is ischemic coronary disease, and in undeveloped countries, the main cause is a rheumatic disease. Mitral regurgitation in the United States is present in approximately 2 million people and is the second most common valvular disease, after aortic stenosis.[17]

In functional mitral regurgitation the mitral valve leaflets and the mitral annulus apparatus are normal, but there is an abnormality of the ventricular wall, that results in a dysfunction between the wall motion, the papillary muscles and the annulus that increases the distance of the annulus and papillary muscles that results in the restriction of the leaflet motion. On the other hand, rheumatic mitral regurgitation is an acquired disease that presents with stenosis of the mitral valve, in this case, the leaflets are thickened and rigid, the chordae tendinae become shortened due to fibrosis as a result of inflammatory changes. There is also calcification of the leaflets and the mitral valve apparatus that can result in leaflet dysfunction and causes leaflet motion restriction and regurgitation.[18][19][17][20]

Symptoms of mitral regurgitation depend on the left ventricle function; patients can present with dyspnea, fatigue, and orthopnea. Patients with severe disease can progress to congestive heart failure with pulmonary congestion and edema. On auscultation of a patient with mitral regurgitation, the S1 may appear diminished, and a classic finding is a holosystolic, high-pitched murmur due to early closure of the aortic valve.[19][20]

Mitral Valve Prolapse (MVP) is defined as the displacement of one or more leaflets by more than 2 mm into the left atrium during ventricular systole, and most commonly is a manifestation of myxomatous degenerative disease of the mitral valve.[21][22] The lack of connective tissue support caused by the myxomatous degeneration causes chordal rupture and diffuse thickening of the leaflets that results in an ineffective leaflet coaptation during systole.[23][21] Mitral valve prolapse is a common condition and also an important risk factor for developing mitral regurgitation, congestive heart failure, arrhythmia, and endocarditis. However, most patients with mitral valve prolapse have a minor alteration of the mitral valve apparatus that is clinically insignificant.[23] Most patients with mitral valve prolapse are asymptomatic and the diagnosis is often made on examination of a patient with the classic mid-to-late systolic click and murmur heard on auscultation. It also may be diagnosed by echocardiography.[21][22]

Mitral Stenosis is defined as the narrowing of the mitral valve apparatus; the most common cause is rheumatic heart disease and develops years after the first episode of rheumatic carditis. The normal orifice of the mitral valve area is 4 to 6 cm^2. Patients with mitral stenosis will experience symptoms when the area of the valve is 2.5 cm^2 or less.[24][25] Severe mitral stenosis is considered when the area is less than 1 cm^2. As the area of the mitral valve narrows, the left atrial pressure, increases. This can lead to transudation of fluid into the lung interstitium and will cause dyspnea at rest or with exertion. The main treatment for mitral stenosis is to avoid the recurrence of rheumatic fever, so prophylaxis against group A beta-hemolytic streptococci is recommended.[24][25] The symptoms of mitral stenosis most commonly manifest during the third or fourth decade of life, patients with atrial fibrillation can develop embolic episodes. Patients can also develop hoarseness due to compression of the left recurrent laryngeal nerve by the enlarged left atrium.[26][27]

Once the severity of the valve defect has been established, an indication for surgery includes all symptomatic patients, with normal or reduced ventricular function, and in asymptomatic or paucisymptomatic patients in whom there is evidence of contractile dysfunction. The choice of surgical timing is based on clinical and instrumental data, as well as on the evaluation of the operating risks and the preference of the patient himself. Also, the possibility of predicting the type of intervention, reparative or replacement, will condition the surgical timing. The ideal time would be to intervene before an irreversible compromise of the ventricular function is achieved. In fact, following an operation performed late, often severe dysfunction of the left ventricle persists, which portends a poor prognosis; on the contrary, an operation performed early, especially if it consists of a repair, involves a low operative risk and allows the patient a quality and life expectancy not different from the normal population. The advantages of repair over replacement include improvements in survival, the lower perioperative mortality and the better preservation of the post-operative ejection fraction, as demonstrated by several studies that have been published in the last decade.

When valvular repair is not considered feasible, mitral valve replacement with preservation of the subvalvular structures is considered the next option. Indeed, when the subvalvular apparatus is not preserved during mitral replacement surgery, the post-surgical sphericity of the left ventricle increases; this unfavorable geometric change explains the decrease in the post-operative ejection fraction compared to the substitution intervention with preservation of the subvalvular apparatus.

In considering specifically the degenerative pathology, the degree of the feasibility of the reparative intervention is very high, being executable in more than 90% of the patients. Estimates are that over 80% of valves are repairable; in highly specialized centers, more than 90% of operations on the ischemic mitral valve are performed through reparative methods.

In the specific case of ischemic mitral valve insufficiency, in patients with severe valve defects, the correction of the valve pathology in association with coronary artery bypass is certainly recommended, in particular, valve repair.

The mitral valve is an elaborate anatomical structure composed of the interaction between each valvular component, along with the left atrial myocardium and left ventricle, and each of these components plays a different and vital roll in the function of the mitral valve. Mitral regurgitation one of the most common pathologies, and it can present because of leaflet abnormalities caused by rheumatic or degenerative disease, or it may be secondary due to left ventricle dysfunction caused by dilated or ischemic cardiomyopathy with normal mitral valve structure.[19] Knowledge of anatomy and understanding the normal function of the mitral valve structure is crucial for assessing valve failure and its mechanism. This knowledge, in turn, will help with clinical case implementation and better treatments of mitral valve repair with better long term results. 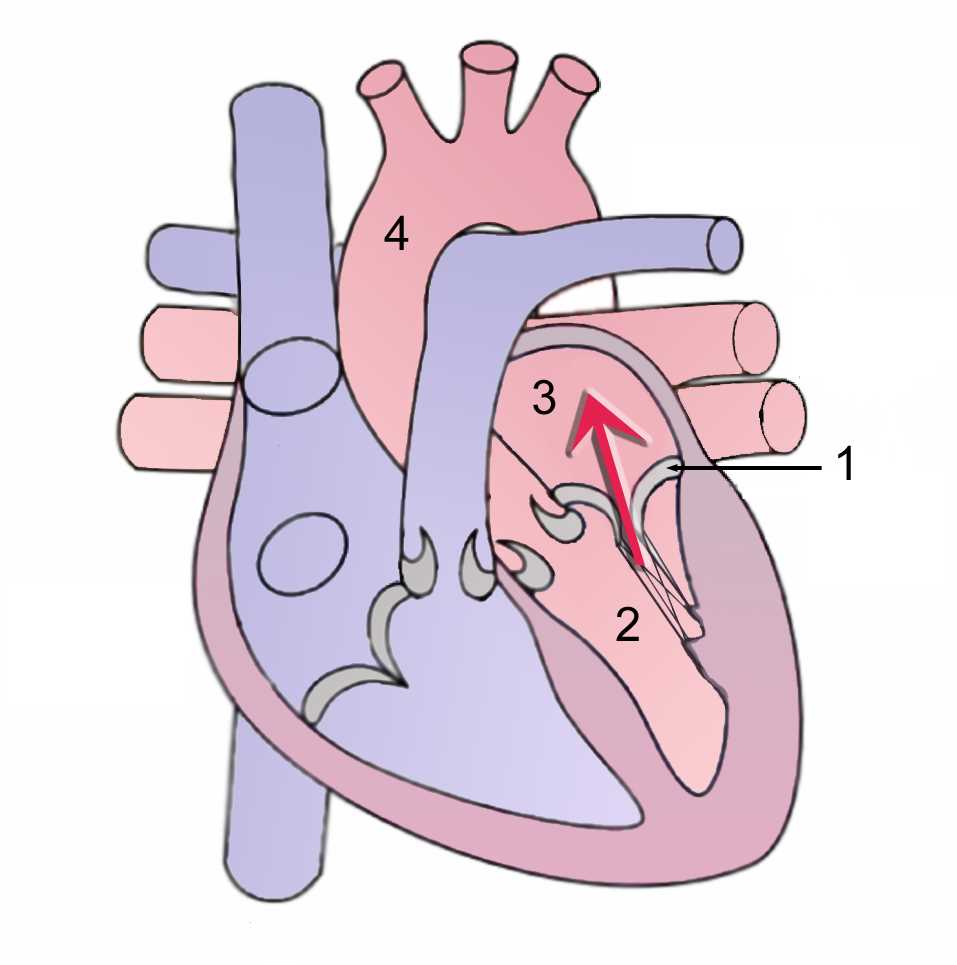 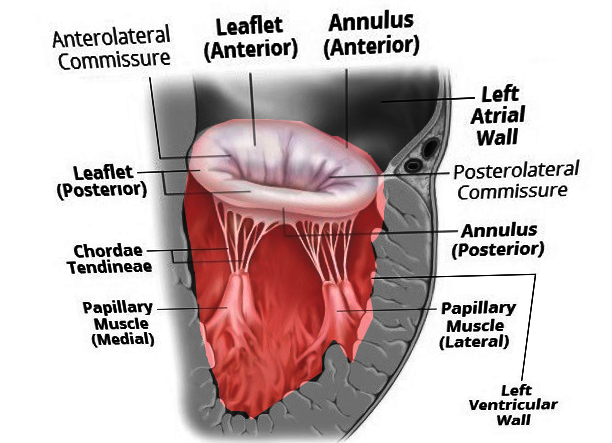 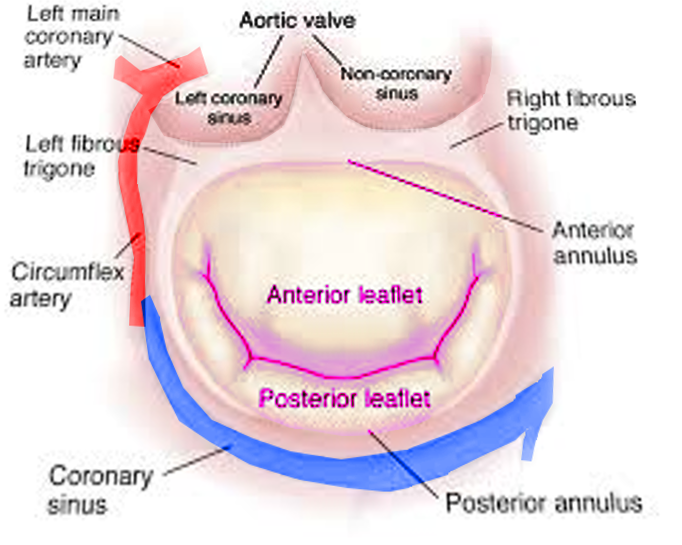 Millington-Sanders C,Meir A,Lawrence L,Stolinski C, Structure of chordae tendineae in the left ventricle of the human heart. Journal of anatomy. 1998 May;     [PubMed PMID: 9723984]

Zaky A,Nasser WK,Feigenbaum H, A study of mitral valve action recorded by reflected ultrasound and its application in the diagnosis of mitral stenosis. Circulation. 1968 May;     [PubMed PMID: 5646862]