Patients frequently present to the emergency department with a variety of external ear complaints ranging from traumatic injuries (lacerations and avulsions), auricular collections that require drainage (hematomas and abscesses) and embedded foreign bodies (earrings and earring backings). Typically, oral and parenteral medications do not provide adequate pain relief, and procedural sedation has a sizeable risk burden particularly in pediatric patients. Injections directly into the external ear are painful and have a high risk of provider needlestick.  On the other hand, if a larger area of analgesia for the ear is needed, a peripheral nerve block is typically a well-tolerated method.  Multiple nerves innervate the external ear and originate from both cranial nerves and the cervical plexus. Historically, the ring block was the most common method of peripheral external ear nerve block.  With the increased availability and use of ultrasound in the emergency department, the literature shows that ultrasound can help localize the great auricular nerve and the lesser occipital nerve for nerve block.  Additional nerve block of the auriculotemporal nerve is as, if not more effective, more direct, and provides equivalent analgesia using less anesthetic agent.

In the emergency department, a nerve block of the external ear is most suitable for, but not limited to the following situations[2][3][4]:

*historically, the addition of epinephrine to local anesthetic injected into the auricle was contraindicated but recent literature demonstrates its safety without risk of ischemic necrosis[7][8]

Medical professionals to include physicians, physician assistants and nurse practitioners who are trained and experienced in the performance of peripheral nerve blocks, as well as, skilled in ultrasound-guided procedures.  One nonsterile person for assistance as needed.

Explain the risks and benefits of a peripheral nerve block to the patient and obtain written informed consent if the patient is able.  Lay the patient in lateral decubitus position with the affected side up. Set the ultrasound machine on the opposite side of the stretcher from where you will be standing. Sterilize the linear ultrasound probe and place in a sterile probe cover.  Cleanse the area of the auricle (both anterior and posterior surfaces), the postauricular area including the mastoid process, front of the ear, and the lateral neck along the sternocleidomastoid muscle with 2% chlorhexidine.  Drape the patient with sterile towels with prepped area exposed.  Let the chlorhexidine dry completely before beginning the procedure. Apply sterile ultrasound gel to the area.

At completion, typically, the total amount of local anesthetic is approximately 10 to 12mL, and the trajectory of the injections will look like a V (for the inferior ear block) and an upside-down V (for athe superior ear block) encircling the ear.

NOTE:  To obtain complete anesthesia of the external ear particularly the superior-medial helix minus the external canal you will have to perform steps 7 and 8 of the ring block (to include the auriculotemporal nerve distribution) with the great and lesser occipital nerve block.

NOTE: The ring block provides analgesia for the external ear with the exception of the external auditory canal.

Peripheral nerve block of the external ear is a valuable procedure utilized in a multitude of settings including the operating room, office, and emergency department.  It is a well-tolerated, relatively quick procedure that can be used on its own or as an adjunct to other forms of analgesia.

Expeditious, humane and safe care of patients should always guide us in our practice.  Peripheral nerve block of the external ear is a valuable procedure to become familiar with as it can expedite analgesia which will then accelerate completion of procedures and decrease patient discomfort whether suturing a laceration, draining an abscess, or removing a foreign body.  By utilizing the peripheral nerve block, patient-centered care is at the forefront as it minimizes pain quickly and more safely than injecting directly into the external ear.  The peripheral nerve improves safety with fewer needle-sticks to health professionals compared to direct local injection and shorter overall procedure duration utilizing fewer staff members when compared to moderate sedation or general anesthesia.  The use of ultrasound improves locating the nerves, avoids vasculature and decreases the amount of anesthetic required. 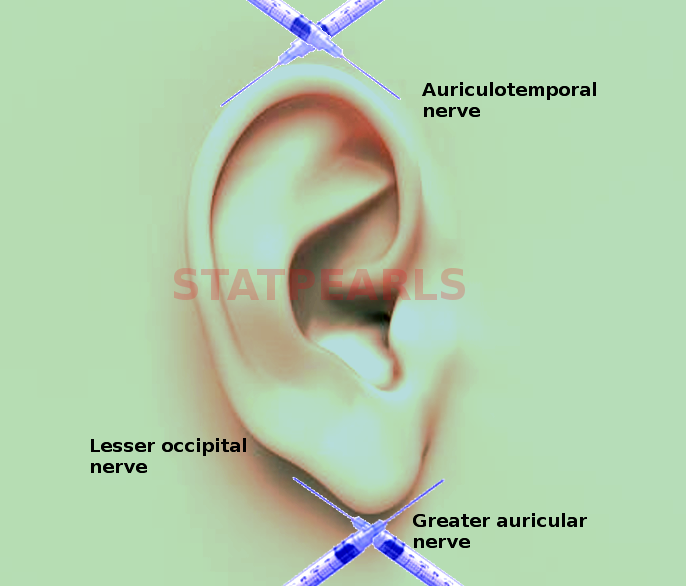