The levator labii superioris muscle is a three-part muscle that provides facial expression and dilation of the mouth. It courses alongside the lateral aspect of the nose and its primary function is elevation of the upper lip. It is also involved in movements such as expression of disgust, sadness and disdain, nasal flaring, retching (vomiting), and even to show oral content. Its origin is on the lateral aspect of the nose and it extends laterally to the zygomatic bone. The levator labii superioris receives its blood supply from terminal branches of the facial artery and the infraorbital branch of the maxillary artery. The buccal branch of the facial nerve (cranial nerve VII) innervates the levator labii superioris.

The muscles of the face begin to develop between the third and eighth weeks of embryonic life. The muscles originate as a thickening of the mesoderm layer of the second branchial arch. The infraorbital lamina and occipital platysma are the first laminae to develop. Both infraorbital laminae give rise to the levator labii superioris, among many other facial mimetic muscles. Improper development may lead to congenital facial weakness, which most often presents with segmental dysfunction corresponding to the affected muscles, in contrast to traumatic or inflammatory facial paralysis, which is most often hemifacial.

The buccal branch of the facial nerve innervates the levator labii superioris as well as other surrounding muscles.

As noted above, the levator labii superioris muscle is divided into three parts: medial, central, and lateral.

The central/intermediate portion (infraorbital head or quadratus labii muscle) arises from the lower margin of the orbit directly above the infraorbital foramen. The attachment is mostly to the maxilla, with a few of the other fibers attaching to the zygomatic bone. The fibers ultimately converge and insert into the dermis of the upper lip between the angular head and the levator anguli oris.

The lateral portion, which forms the zygomatic head (and is also known as the zygomaticus minor muscle), arises from the malar surface of the zygomatic bone directly behind the zygomaticomaxillary suture and heads downward and medially in the direction of the upper lip.

One study performed in Taiwan found that 31 out of 32 adult cadavers had zygomaticus minor muscle fibers inserting into the upper lip and originating from the zygomatic region and the orbicularis oculi.[3] In 14 of the cadaver specimens (43.8%), some of the zygomaticus minor fibers blended with the lower border of the orbicularis oculi muscle. The muscle also attached to the palpebral ligament medially, the face of the maxilla, the belly of the levator labii superioris alaeque nasi, and the depressor supercilii muscle as well.

Excessive gingival display, or “gummy smile,” is often caused by hyperactivity of the muscles of the upper lip, including but not limited to the levator labii superioris muscle. Correction of a gummy smile is performed in multiple ways, depending on the severity, the cause, and the amount of jaw protrusion. If the cause is hyperactivity of the upper lip muscles, myotomy and lip repositioning followed by orthodontic treatment can be an effective surgical intervention.[4][5]

Trauma or surgery for cutaneous malignancy can result in soft tissue defects of the nose; a pedicled levator labii superioris alaeque nasi flap has been described for reconstruction of these decificencies.[6]

There are alternative ways to treat a “gummy smile,” or excessive gingival display. Injecting botulinum toxin is an effective treatment for patients with excissive gingival show caused by overactive upper lip elevators.[7] This option is a newer technique and is much less expensive and traumatizing to patients than performing surgery. The shortcoming of botulinum toxin treatment is that it will need repeated injection as the drug effect lasts only 3-4 months, and it is only useful if a hyperactive upper lip is the cause of the excessive gingival display.[8]

Additionally, infiltration of hyaluronic acid has been shown to be safe, effective, and long-lasting.[9]

Weakness of the levator labii superioris muscle is most often unilateral, but can also present bilaterally and severity ranges from slight weakness to full paralysis. Most commonly, it results from damage to the facial nerve or the buccal branch of the facial nerve due to trauma or inflammation, such as Bell's palsy, Ramsay Hunt syndrome, or Lyme disease. Iatrogenic damage to the facial nerve can also lead to weakness of the levator labii superioris muscle. Some patients are born with congenital facial paralysis, in which one or more mimetic muscles are atrophic or absent. It is crucial to perform a full neurological examination and determine the cause of the weakness.

As an interesting side note, levator labii superioris muscle transposition has been described as a treatment for chronic oral maxillary sinus fistulas in horses.[10] 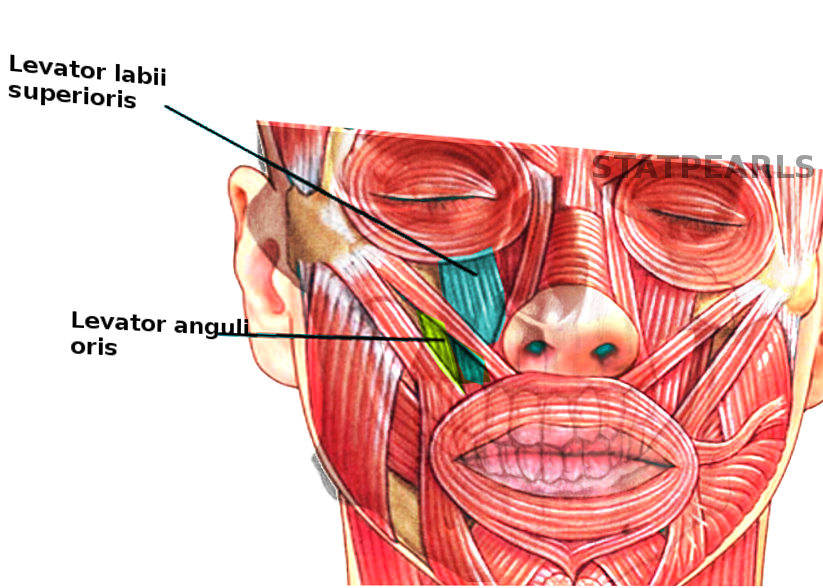 Polo M, Myotomy of the levator labii superioris muscle and lip repositioning: a combined approach for the correction of gummy smile. Plastic and reconstructive surgery. 2011 May;     [PubMed PMID: 21532443]