The stomatognathic system includes various anatomical structures, which allow the mouth to open, swallow, breathe, phonate, suck and perform different facial expressions. These structures are the temporomandibular joint (TMJ), jaw and mandible, muscle tissues and tendons, dental arches, salivary glands, as well as the hyoid bone and the muscles that connect the latter to the scapula and the sternum, the muscles of the neck.

TMJ through its complex movements, on different orthogonal planes and multiple rotation axes, works in synergy with all the structures just listed. The TMJ must also work in coordination with the contralateral TMJ to coordinate tandem dynamic function.

Its position and structure make it an intersection of information and influences that expand throughout the body, and vice-versa; the mechanical information of other body districts can reflect in the TMJ.

The article reviews functional anatomy, embryological development, differences in the anatomy of the child and the adult, with a look at the surgical, clinical and other physiological variables that influence the temporomandibular function. The text reviews the manual approach to TMJ, which is often used as a support for joint rehabilitation, in synergy with the doctor.

The temporomandibular joint (TMJ) is a diarthrosis, better defined as a ginglymoarthrodial joint. TMJ is composed of a synovial cavity, articular cartilage and a capsule that covers the same joint. We find the synovial fluid and several ligaments. The joint is the union of the temporal bone cavity with the mandibular condyle.[1]

The cranial surface of TMJ consists of the squamous area of the temporal bone; it takes the name of glenoid fossa and welcomes the condyle of the jaw. The posterior area of the fossa is known as posterior articular ridge; sideways to the latter, we find a bone portion called postglenoid process. The postglenoid process area contributes to forming the upper wall of the external acoustic meatus.[1]

The glenoid fossa is wider in its mediolateral portion, compared to the anteroposterior area. The inferior articular surface of the glenoid fossa represents the superior area of the mandible.[1] It consists of the condyle of the mandible with a transverse diameter of about 15 to 20 mm and a measurement of about 8 to 10 mm in the anteroposterior direction.

The articular disc that covers the condyle and interposes below the glenoid fossa has a biconcave or oval shape; the cartilaginous disc has an anterior (about 2 mm) and posterior (about 3 mm) portion, with a thinner diameter in the middle. The anterior portion of the disk consists of a layer of fibroelastic fascia (above) and a fibrous layer (inferiorly). The upper portion is in contact with the postglenoid process, with the function of preventing the disc from slipping during the opening of the mouth. The lower portion of the disk has the task of avoiding excessive rotational movements of the disk relative to the mandibular condyle.

The anterior portion of the articular disk is in contact with: the joint capsule; articular eminence; condyle; the upper area of the lateral pterygoid muscle.

The posterior portion of the articular disk relates to: bilateral retro-disc tissue (behind the condyle), glenoid fossa; condyle; temporal bone.

The medial and lateral aspect of the cartilaginous disc is attached to the condylar formation of the mandible. The edges of the disc partly fuse with the fibrous capsule surrounding the joint.

Several ligaments manage the TMJ forces and send multiple proprioceptive afferents. The proprioception of the joint is provided by various components, such as the capsule, masticatory muscles, skin receptors and receptors within the periodontal ligaments. The tension perceived by the articular ligaments plays an important role in the function of TMJ.[2]

When the mouth opens there is a combination of rotational movement of the discomandibular space and action of the translational discotemporal space; the rotation occurs before the translation. The condyle can move laterally through a rotation and then an anterior sliding of the same condylar structure, and an anterior translation/rotation in the medial direction of the opposite condyle. The condyle can move backward, while the opposite condyle slides forward. The bilateral or ipsilateral TMJ protrusion occurs by anterior sliding

TMJ derives from the first pharyngeal arch, where we can recognize a mesodermal part (muscles and vessels) and mesenchyme (from neural crests) for bones and cartilages. The development of TMJ divides into three stages: the blastemic stage; the cavitation stage and lastly, the maturation stage.[1]

The morphology of the glenoid fossa and the condyle will be under the influence of the mechanical forces of the vessels and neighboring muscles. At birth, TMJ, compared to other types of synovial joints, is not fully developed. The jaw will begin to develop from the fourth week. TMJ develops simultaneously with the ear.

The child has a more obtuse mandibular arch, compared to the adult, which has a more angular shape; in the baby, the glenoid fossa is looser and, the cartilage is not yet present, but there will be a fibrous connective tissue. Between 5 and 10 years of age, the condyles grow in a posterior, lateral and upward direction; the joint shape will be further managed by the mechanical forces of the teeth and the chewing muscles.[1]

The venous drainage occurs through the pterygoid plexus in the retrodiscal area, in communication with the internal maxillary vein, the sphenopalatine vein, the medial meningeal veins, the deep temporal veins, the masseterine veins, and the inferior alveolar vein.

Lymphatic drainage is not always straightforward to describe because, in the case of TMJ disease, lymph nodes can increase in number. Generally, the lymphatic system that affects TMJ comes from the area of the submandibular triangle.

TMJ has several proprioceptive receptors, in particular in the parenchyma of the articular disk: Golgi-Mazzoni and Ruffini; myelinated and nonmyelinated nerve fibers.

The articular capsule in the anterolateral portion receives innervation by the masseteric nerve, a branch of the second branch of the trigeminal nerve. The lateral area of the capsule, on the other hand, is innervated by the auriculotemporal nerve of the third branch of cranial nerve V.[8][9]

The muscles that make direct contact with TMJ are four: masseter, temporal, and two pterygoids.

Pneumatization of the articular tubercle is an anatomical variant of TMJ. Consists of bone cavities/air cells in the root of the zygomatic arch and/or in the tubercle or eminence of the temporal bone. These cavities may be present only ipsilaterally or bilaterally. Normally these cavities are reabsorbed during puberty, but it may happen that the reabsorption does not occur. It does not seem that this variability could negatively affect the symptomatology or function of TMJ.[10]

Surgical procedures for TMJ are performed for various medical reasons: local and/or systemic disease; trauma; alteration of joint morphology and loss of function. The surgical approach depends on the present problem, on the anatomical physiology, the psycho-emotional need of the patient, the experience of the surgeon, and the pre-surgically pre-established objectives.

Orthognathic surgery in the presence of aesthetic/functional problems, for example, mandibular advancement or to increase the function of the joint in opening the mouth, or to avoid joint dislocation, do not give definitive conclusions in the benefit-side effects relationship. Probably, postoperative functional results are more effective if TMJ itself is free of concomitant pathologies (arthritis, arthrosis, etc.).[11][12]

We know little of what happens after the surgical approach in the presence of synovial plicae to TMJ, and often, the presence of this functional alteration may not give symptoms. The plica is discovered only after an instrumental examination.[13]

Total joint reconstruction interventions or with alloplastic joint replacement appear to have good post-surgical results in the presence of idiopathic condylar resorption.[14][15]

Approaches with arthroscopic seem to achieve good results regarding the repair or removal of the joint disk.[16]

Many pathologies can impact the TMJ and potentially cause varying degrees of clinical dysfunction.  These conditions include but are not limited to[17]:

Clinical evaluation begins by observing the patient's natural movements. The evaluation includes the observation of the symmetry of the face and the movements of TMJ as well as when the pain appears (at which articular degree of opening or closing and accessory movements), and the entity of the pain and if a joint sound appears.

The muscles are palpated (internally and externally), the presence of enlarged submandibular lymph nodes is also checked by palpation. Next comes testing the strength of the muscles, individually, and during complex movements. The operator passively moves the jaw, using a glove, to evaluate the TMJ ligament apparatus. We look inside the mouth to check for anatomical anomalies. The fingers are placed on the joint while the patient opens his mouth to evaluate further anomalies. Always with the fingers in support of the TMJ, it is asked to pull out the tongue, turn and flex/extend and incline the neck, during the opening of the mouth; this is to verify any accentuations of TMJ dysfunction, in association with other muscle-joint districts.

Some tools can improve the measurement of the ROM of the mouth, such as the Boley gage and the TheraBite range of motion scale. These evaluations have their basis in the research diagnostic criteria for temporomandibular disorders (RDC/TMD), updated to 2016.[18]

In children with a type II class, they have a higher percentage of TMJ dysfunction; this dysfunction in the growth phase will result in an asymmetry of the mandibular branch.

Instrumental assessments are critical to a safe diagnosis and are necessary before taking a therapeutic approach to a TMJ in dysfunction.[19]

Magnetic resonance image. It is possible to observe the condition of the articular disk, the anatomy, function, and form.

AN issue generating much debate is the relationship between TMJ function and anatomy and posture. The difficulty in positively affirming the existence of a relationship between posture and TMJ is a function of the anatomical complexity of the same joint (capsule, muscles, ligaments, nerves, disk) and the comparison with all that is the body. Not only. Research is not yet able to find the correct unit of measurement or the ideal tool for measuring the relationship between TMJ and posture. It is necessary to consider the patient's historical variables and how long the patient has articulation dysfunctions.

There is a relationship between TMJ function and cervical-hyoid-scapula tract.[22] Patients with TMJ dysfunction have abnormal plantar support pressure compared to people without TMJ alterations.[23][24] 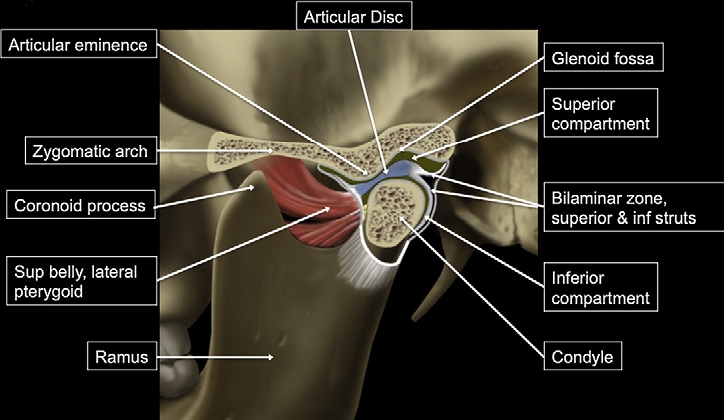 The figure illustrates the different components of the temporomandibular joint.
Contributed by Bruno Bordoni, PhD.