The larynx is a midline structure at the level of C3 through C6 that connects the pharynx to the trachea. Its major functions include respiration, phonation, and swallowing. It is comprised of a cartilaginous skeleton, muscles, mucosal lining, ligaments, and membranes.[1]

The thyrohyoid membrane is one of the extrinsic membranes that compose the larynx. It is a broad fibro-elastic layer named for its attachments as it attaches the upper border of the thyroid cartilage to the hyoid bone. The thicker median section of the membrane is the thyrohyoid ligament. It attaches the superior thyroid notch/laryngeal notch to the hyoid. The lateral surfaces of the membrane contain an aperture for the internal branches of the superior laryngeal nerves, the superior laryngeal artery, and lymphatics.

The normal swallowing mechanism includes laryngeal elevation, posterior deflection of the epiglottis, inhibition of respiration, and closure of the vocal cords to prevent aspiration.[2]

The superior and inferior laryngeal arteries supply most of the blood to the larynx.

The lymphatic system of the larynx can be differentiated based on if draining from above or below the vocal folds:

The superior laryngeal nerve and recurrent laryngeal branches of the vagus nerve mainly innervate the larynx.

The superior laryngeal nerve arises from the inferior ganglia of the vagus nerve and descends adjacent to the pharynx, behind the internal carotid artery prior to splitting into the internal and external branches.

Intrinsic Muscles of the Larynx that Act on the Vocal Cords

Intrinsic Muscles of the Larynx that Act on the Laryngeal Inlet

Extrinsic Muscles of the Larynx

The thyrohyoid membrane has been suggested as a target for an ultrasound-guided block of the internal branch of the superior laryngeal nerve. Ultrasound-guided in-plane injections have been shown using the thyrohyoid membrane as a target plane for local anesthetic injection. This can provide anesthesia to the base of the tongue, posterior surface of the epiglottis, arytenoids, and aryepiglottic folds and can assist in airway management.[9]

Transection of the thyrohyoid membrane is rare but can be fatal. A prompt diagnosis and securing airway patency are essential in any patient with a neck injury.[3]

Lateral thyrohyoid ligament syndrome can cause acute or chronic cervical pain. Patients typically present with unilateral neck pain, odynophagia and foreign body sensation, and the pathognomonic feature of point tenderness with deep palpation along the axis of the lateral thyrohyoid ligament. Inflammation of the ligamentous, cartilaginous, or bursa-related anatomical structures might contribute and can be caused by overuse or factors such as a cough, voice abuse, or strenuous neck and upper limb movements. A majority of patients achieve improvement in symptoms with steroid and local anesthetic injection. There is no imaging to confirm this condition. Therefore it is critical for physicians to be aware of the diagnosis, as a physical exam demonstrating localized tenderness over the lateral thyrohyoid ligament axis is all that is required to make a diagnosis.[10] 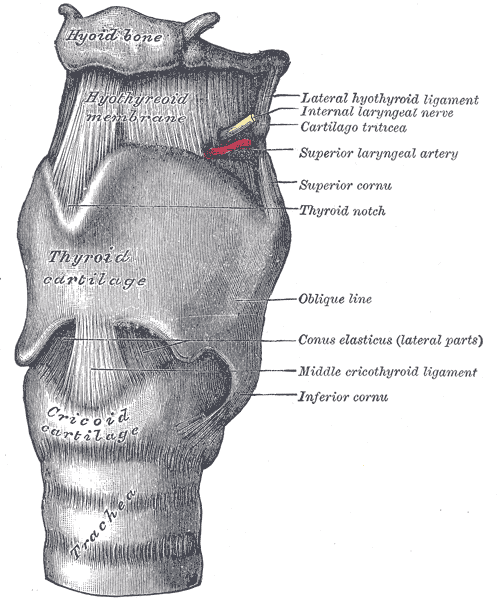 Stopar-Pintaric T,Vlassakov K,Azman J,Cvetko E, The thyrohyoid membrane as a target for ultrasonography-guided block of the internal branch of the superior laryngeal nerve. Journal of clinical anesthesia. 2015 Nov     [PubMed PMID: 26297210]