Broadly speaking, the neck classically divides into two distinct anatomic triangles: anterior and posterior. The anterior neck then divides into four smaller triangles – submental, submandibular, superior carotid, and inferior carotid triangle; the regions of the anterior neck are beyond the scope of this text and will not be discussed. The anatomic definition of the posterior neck uses the following borders: posterior border of the sternocleidomastoid, clavicle, and anterior border of the trapezius. The inferior belly of the omohyoid muscle then divides this posterior triangle into the occipital and supraclavicular triangle, the latter of which will be discussed primarily in this text. The supraclavicular triangle is referred to as the subclavian triangle in some texts.[1] The term “fossa,” refers to the shallow depression that overlies the namesake triangle.

The vasculature within the region of the supraclavicular triangle is complex, but critical to understand with regards to generating a differential diagnosis for pathology in the region. The largest artery within the fossa is the subclavian, which is divided into three distinct segments by the anterior scalene muscle. The third segment, or the portion of the subclavian artery that runs distally to the anterior scalene muscle, is the portion within the supraclavicular fossa. Additionally, the transverse cervical and suprascapular arteries (branches of the subclavian) course through the fossa after branching from the first portion of the subclavian artery. Venous structures in the supraclavicular fossa include the external and internal jugular veins as well as the corresponding structures for the aforementioned arterial structures (subclavian, suprascapular, and transverse cervical veins). Of note, the fascia of the omohyoid muscle within the region separates the superficial suprascapular vein from the deep suprascapular artery.

The supraclavicular fossa houses differing lymphatic structures that vary by laterality. On the left, the principal structure is the thoracic duct which collects lymph from the majority of the body before emptying into the origin of the brachiocephalic vein. On the right, the primary lymphatic structure is the right lymphatic duct, which is responsible for draining lymph from the right thorax, right upper extremity, and right portion of the head and neck into either the subclavian vein or right internal jugular vein. Of note, there are many lymph nodes within the supraclavicular fossa, the exact locations of which are highly involved and beyond the scope of this text. Using the standardized classification of lymph nodes by levels within the neck, any lymph nodes within the supraclavicular fossa would be a designation of Level V lymph nodes. Alternatively, if classified by region, these nodes would be classified as inferior deep cervical lymph nodes.[2]

The primary neural structures in the supraclavicular fossa are separated into superficial and deep nerves by the fascial carpet of the neck. Superficial to this fascial carpet lies the vagus nerve (cranial nerve X) within the carotid sheath. Deep to the fascial carpet within this region lie the phrenic nerve (C3-C5), which is responsible for innervating the diaphragm.[2] The phrenic nerves run along the anterior scalene muscles while in the supraclavicular triangle as they course toward the diaphragm. Also within the supraclavicular fossa is the brachial plexus (C5-T1), a complex network of nerves that is responsible for innervating different portions of the upper extremities and thorax. The structure of the brachial plexus and its exact course into the upper extremity is highly intricate and a separate topic outside this text.

The musculature of the supraclavicular is critical to understand, as muscles often serve as anatomic landmarks. Most superficially is the platysma, which is a thin muscle that stretches from the pectoralis and deltoid to the base of the mandible superiorly. The platysma overlies the fascial carpet and receives innervated from the cervical branch of the facial nerve. Two of the three borders of the supraclavicular fossa are muscles that are defining structures within the region. Anteromedially, the sternocleidomastoid (SCM) stretches from the sternum to the mastoid bone, and it is superficial to the fascial carpet. The omohyoid muscle represents the superolateral border, and stretches from the scapula to the hyoid bone, passing behind the SCM. The omohyoid is composed of two muscle bellies, the tendon between which lies invested in the deep cervical fascia. Finally, deep to the cervical fascia are the scalene muscles, which are a group of three accessory muscles that originate on the cervical vertebrae and insert on the first and second ribs. Innervation of the scalenes is via C4-C6, and these muscles serve as accessory muscles of respiration.[2]

In general, the workup for a supraclavicular fossa cystic mass should involve imaging with ultrasound, computed tomography (CT) to determine the vascularity of the lesion. If the lesion is not vascular, a fine needle aspiration (FNA) is generally the recommendation, after which the quality of the fluid and cytology will inform the next best steps in surgical approach.[2]

The complexity of the anatomy of the supraclavicular fossa allows for an extensive differential diagnosis for regional pathology, which categorizes into neoplastic, congenital, and infectious etiologies. Neoplastic conditions can result in supraclavicular lymph node enlargement due to either a primary neoplasm (such as lymphoma) or metastatic spread from an external location. Primary malignancies that can metastasize to the region include but are not limited to those from the breast, lung, reproductive organs, gastrointestinal tract, or thyroid. FNA can be used to establish the primary neoplasm. Of note, a left-sided enlarged node in the supraclavicular fossa referred to as Virchow’s node can herald advanced gastrointestinal malignancy.[3] In one study, the majority of supraclavicular masses biopsied via FNA were found to be the result of a malignant process, with metastatic spread being far more likely than lymphoma.[4][5]

Congenital anomalies that result in supraclavicular masses can be due to abnormal development of the upper respiratory or gastrointestinal tract. [2] These are often cystic in nature, and include such entities as epidermoid cysts,[6] cystic teratomas,[7] and bronchogenic cysts,[8] among others. In addition, lymphatic malformations such as cystic hygromas can also be the cause of masses in the supraclavicular fossa and should a consideration in a differential diagnosis.

Finally, an infection can cause lymphadenopathy resulting in cystic supraclavicular masses. The causes of infection vary based on location and include but are not limited to streptococcal, staphylococcal, fungal, and mycobacterial sources.[2] FNA and culture are highly useful in determining the microbiological etiology of lymphadenopathy in these instances.

The utility of the supraclavicular fossa ultrasound window in positioning a central venous catheter (CVC) has been recommended by some authors in the literature as a methodology to position the CVC tip in real time within the cavoatrial junction while excluding arterial puncture.[9]

Additionally, though brachial plexus blocks are often performed through axillary, interscalene, or infraclavicular approaches prior to upper limb surgery, a recent review suggests that ultrasound-guided supraclavicular blocks can be attempted with ultrasound guidance to reduce the risk of pneumothorax.[10] 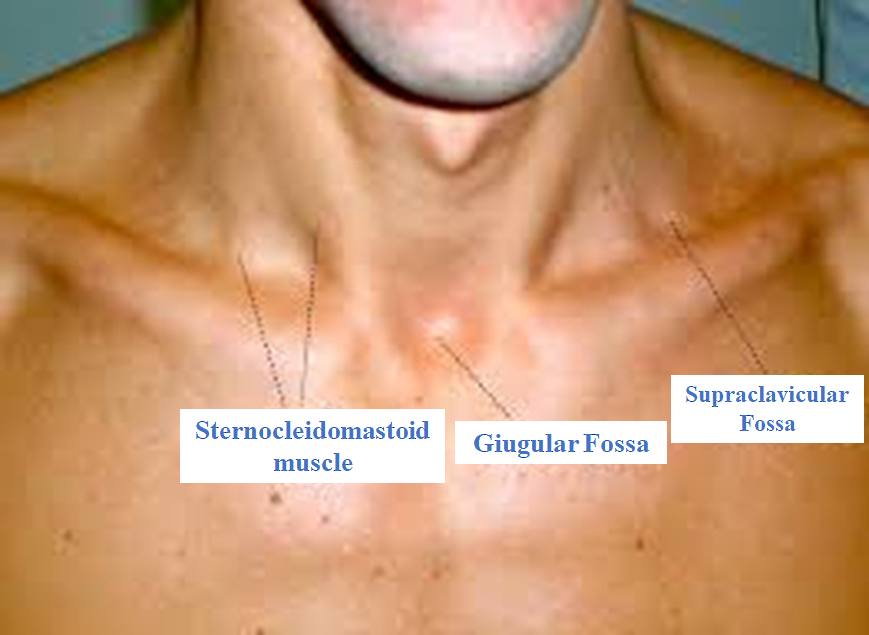