Its origin lies in the lateral epicondyle of the distal humerus and the posterior aspect of the ulna. It inserts onto the dorsal base of the fifth metacarpal after passing through the sixth compartment of the extensor retinaculum. It receives its innervation from the posterior interosseous nerve and gets its blood supply from the ulnar artery.[1]

The muscles of the forearm have their origin in the dorsolateral somite cells that form muscles after they migrate to the limb at approximately the fourth week of development. As the limb buds lengthen, the muscles begin to divide into separate functional groups, such as the flexors and extensors. The anterior and posterior pattern of the limb develops by a sonic hedgehog protein, which gets secreted from the zone of polarizing activity.[2]

The extensor carpi ulnaris gets its vascular supply primarily from the ulnar artery, which branches off of the brachial artery near the antecubital fossa and supplies the medial aspect of the forearm. Due to the muscle's location in the posterior compartment of the forearm, it also receives some blood supply from the posterior interosseous artery, a posterior branch of the radial artery, that runs between the superficial and deep extensor muscle groups, supplying both.

The anatomic location of the extensor carpi ulnaris is essential in a variety of orthopedic procedures, including those operations at the level of the distal humerus, elbow joint, forearm, and wrist. For example, during the open reduction and internal fixation of the olecranon and proximal ulnar fractures, the extensor carpi ulnaris is identified based on its original fibers on the lateral epicondyle and dorsal aspect of the ulna and may need to be manipulated to locate the components of the fracture.

One of the injuries that may require surgical intervention is the subluxation of the extensor carpi ulnaris. It more frequently occurs in athletes subject to frequent, forceful wrist rotation than in the general population. Some of the sports in which this injury most commonly occurs are tennis, golf, and water polo.[8] The dislocation occurs with the supination of the forearm as a result of a torn fibro-osseous sub sheath that encompasses the tendon. This sheath is a part of the sixth compartment of the extensor retinaculum that anchors to the distal ulna.

Three different types of retinacular tears can contribute to this condition described in the literature. Type A involves the ulnar rupture of the sheath in which the sheath remains superficial to the tendon. Type B describes a radial rupture of the sheath in which it lies in the ulnar groove of the bone. Lastly, type C occurs when the fibro-osseous sheath is detached from the periosteum of the ulna, thus forming a false pouch for the tendon.[9]

Patients with this injury often describe a painful snap at the dorsal-ulnar aspect of the wrist. There is some controversy concerning the treatment of this injury. However, surgical repair of the fibro-osseous sheath is effective.[10] For the radial rupture of the fibro-osseous sheath securing the tendon, the patients can be effectively treated via direct suture of the sheath over the tendon. For the ulnar rupture of the sheath, patients undergo a reconstruction of the sheath with the existing extensor retinaculum. Upon successfully completing this surgery, patients can return to their previous level of functioning in their respective sports without pain or recurrent dislocation.[11]

The extensor carpi ulnaris is an essential muscle in the activity of the wrist and forearm that contributes not only to the extension and adduction of the wrist but also to its medial stability. It is most commonly injured in athletes subject to forceful wrist movements. Repetitive flexion and extension of the wrist can lead to tenosynovitis due to the irritation of the tendon and the sheath that holds it in place. Overuse can also lead to tendinopathy of the muscle's tendon, in which there can be thickening and painful stiffness of the tendon with minimal structural damage. Continued excessive stress on the tendon can cause structural damage, which can lead to a partial tear.[1]

For testing the extensor carpi ulnaris muscle's function or the instability, ask the patient to pronate the forearm and extend the fingers. Place your hand along the medial border of the hand to provide resistance against the movement. The extended wrist is then adducted against resistance. The muscle can be seen and felt in the proximal part of the forearm, and its tendon can be palpated proximal to the head of the ulna if the muscle is acting normally.[12]

Acute ruptures of the tendon are uncommon and are typically the result of a penetrating injury.[1] 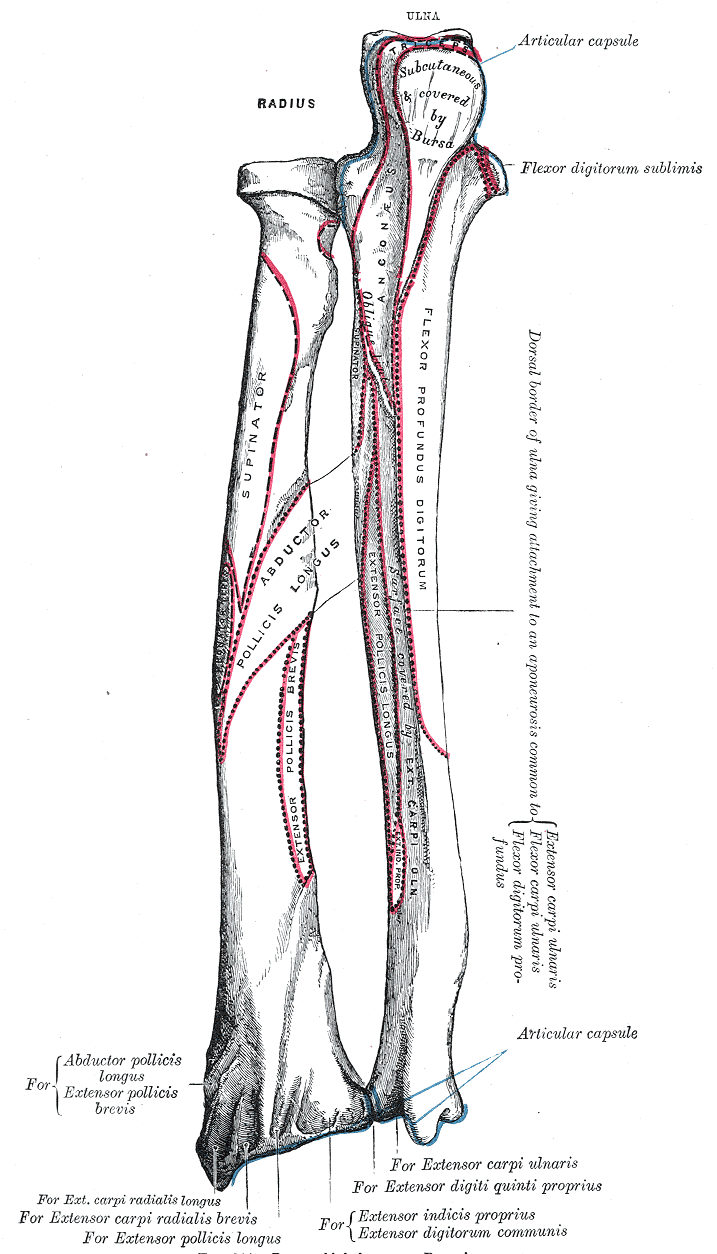 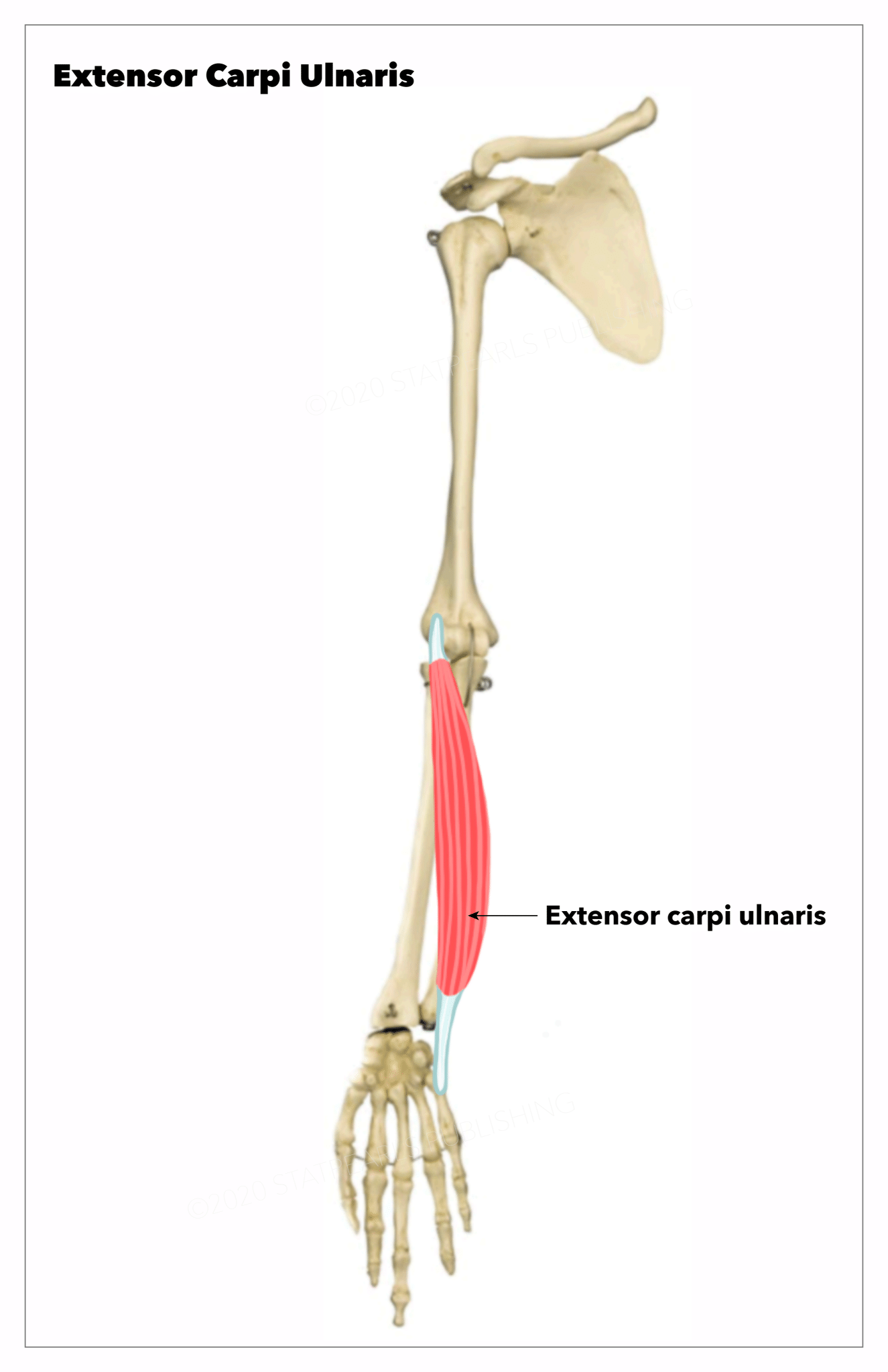