Retinal hemorrhages are an important ophthalmic diagnostic sign for an underlying systemic vascular disorder. They range from the smallest dot and blot hemorrhage to massive sub-hyaloid hemorrhage. The location, size, and distribution of the hemorrhages provide clues to the etiology and uncover underlying systemic disorders such as vascular disease, hematologic disorders, and dyscrasias, infections, trauma, or hypoxia. Rarely it can also be seen idiopathically. Most require a detailed systemic work up to detect the underlying cause for the hemorrhages. Management consists of observation, treating the primary cause, and intraocular management to reduce the ischemic and neovascularization sequelae following the hemorrhages.

Following are the conditions which show retinal hemorrhages depending on the stage and severity of the disease:

These hemorrhages are located between RPE and Bruch membrane and appear dark red with well-defined sharp borders. They are commonly seen in choroidal neovascular membranes (CNVM), choroidal tumors, and choroidal rupture secondary to acute trauma.

Bleeding into the vitreous cavity is seen as fresh blood clots with sudden onset of floaters.[16] Chronic hemorrhages appear as diffuse vitreous clouding with settled blood inferiorly. They are commonly seen due to the rupture of a vessel, as seen commonly in proliferative diabetic retinopathy, retinal arteriolar microaneurysm, or during posterior vitreous detachment. A subretinal hemorrhage can cause a breakthrough bleeding into the vitreous. Breakthrough hemorrhage into vitreous also happens in malignant choroidal melanoma, retinal vascular occlusions, and idiopathic polypoidal choroidal vasculopathy (IPCV).

A detailed history about social conditions, medication use, abuse or trauma, recent Valsalva maneuvers or chest compression injury, flashes or floaters with a sudden transient dimming of vision, are all important to come to a diagnosis. All patients need a slit lamp examination of the anterior segment, dilated fundus examination, and intraocular pressure measurement. Optical coherence tomography (OCT), fundus fluorescein angiography (FFA), and fundus photography are all helpful to determine the location and depth of the hemorrhage. One should suspect abusive head trauma if a child less than three years shows retinal hemorrhages with an intracranial injury.[18]

Blood pressure, body mass index, and blood sugar are mandatory before evaluating further. Also, the following workup would help in diagnosing the underlying systemic disorder leading to the retinal hemorrhages:

A solitary retinal hemorrhage can be observed and followed up for progression in size and number. Hemorrhages that do not obscure or threaten vision do not warrant immediate treatment, and the primary systemic disorder causing the hemorrhages needs to be diagnosed and addressed. Direct intervention for retinal hemorrhages is indicated in submacular, subhyaloid, and vitreous hemorrhages because of their potential to damage vision irreversibly.

Most dot and blot, splinter, and flame-shaped hemorrhages are not vision-threatening and are usually found in the posterior pole sparing the fovea and can be observed. Hemorrhages seen in retinal vein occlusions are not treated per se, but the retinal edema or the neovascularization, which follows as a sequela, needs to be treated. Roth spots are generally asymptomatic and typically resolve with treatment of the underlying disease, especially subacute bacterial endocarditis.

Subhyaloid hemorrhage is seen typically in Terson syndrome and Valsalva retinopathy.[15][14][4] Besides, bilateral hemorrhages in the vitreous, sub-hyaloid, or intra-retinal hemorrhages are also seen. The first approach for a subhyaloid hemorrhage is always conservative observation. If no signs of resolution are seen within 1 to 3 months or for patients with high professional visual demand, Nd: YAG laser membranotomy is done to rupture the posterior hyaloid or the internal limiting membrane to drain the blood into vitreous. The blood settles into the inferior vitreous and out of the visual axis, prompting a rapid return of central visual acuity. Unresolved vitreous hemorrhage obstructing vision needs pars plana vitrectomy (PPV).

Submacular hemorrhage (SMH) is a sight-threatening complication that can occur in a CNVM secondary to exudative ARMD, PCV, high myopia, angioid streaks, and others. CNVM appears as a dirty grey-green color lesion, deep to the retina.[19] The grey-green appearance is believed to be due to the hyperplastic response of RPE. It may be accompanied by subretinal hemorrhage and/or lipid, serous or hemorrhagic PED, neurosensory exudate detachment, macular edema, and cystoid macular changes. Signs of choroidal neovascularization include RPE elevation, exudate, or subretinal fluid.

Patients prone to develop CNVM are advised to self-check their retinal status weekly through Amsler grid charts. Any sudden onset of distortion of lines is suspicious of the development of CNVM. When left untreated, SMH causes irreversible vision loss by damaging the photoreceptors. The treatment strategies for SMH include:

Vitreous hemorrhage is commonly seen in vascular conditions such as diabetic retinopathy and retinal vein occlusions. The treatment strategies depending on the severity of hemorrhage and vision loss are as follows:[16][20]

Since retinal hemorrhages can be found in both children and adults, therefore the differentials also vary according to the age group.

Following are the complications that can arise secondary to retinal hemorrhages and underlying disorders: 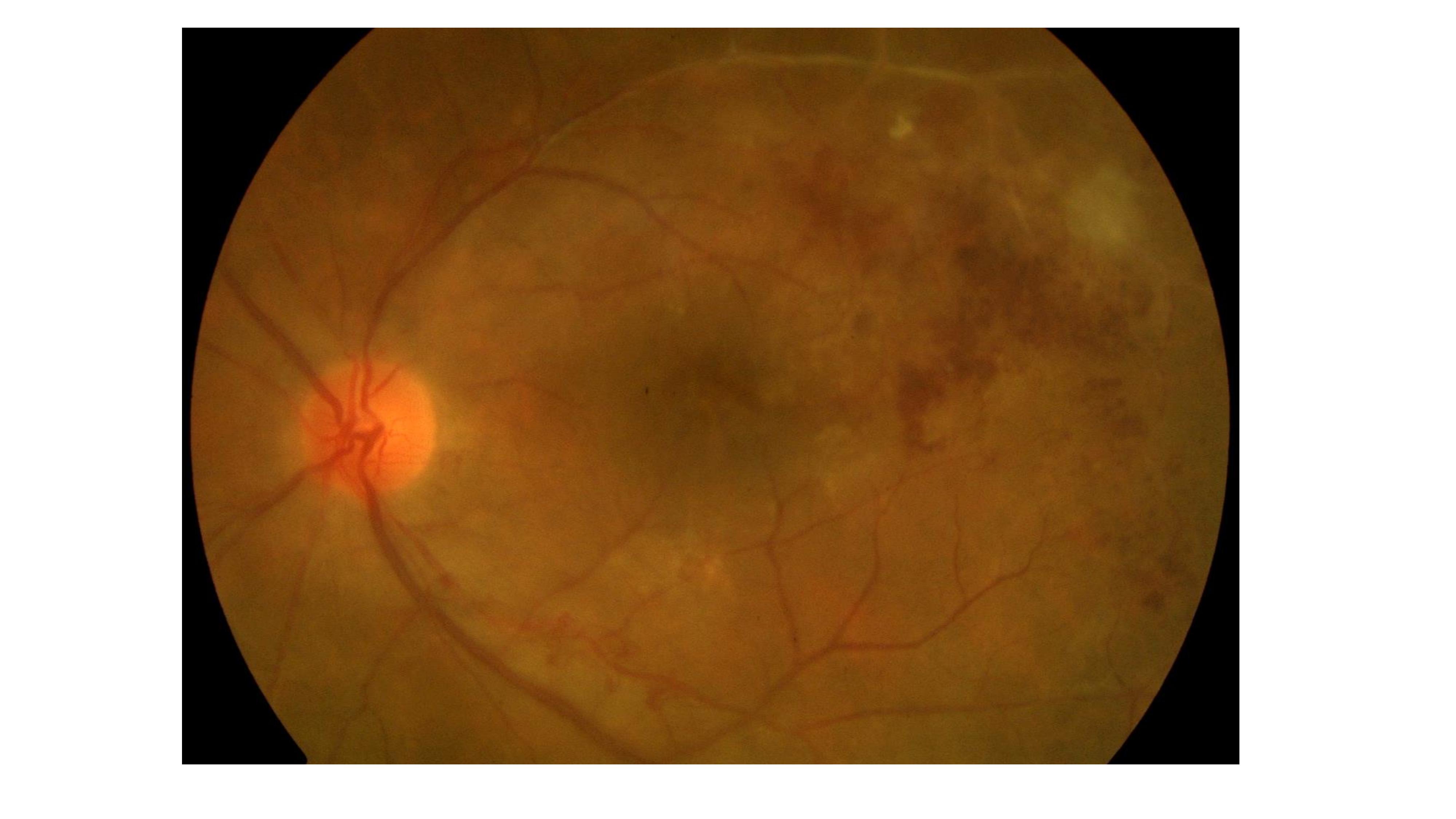 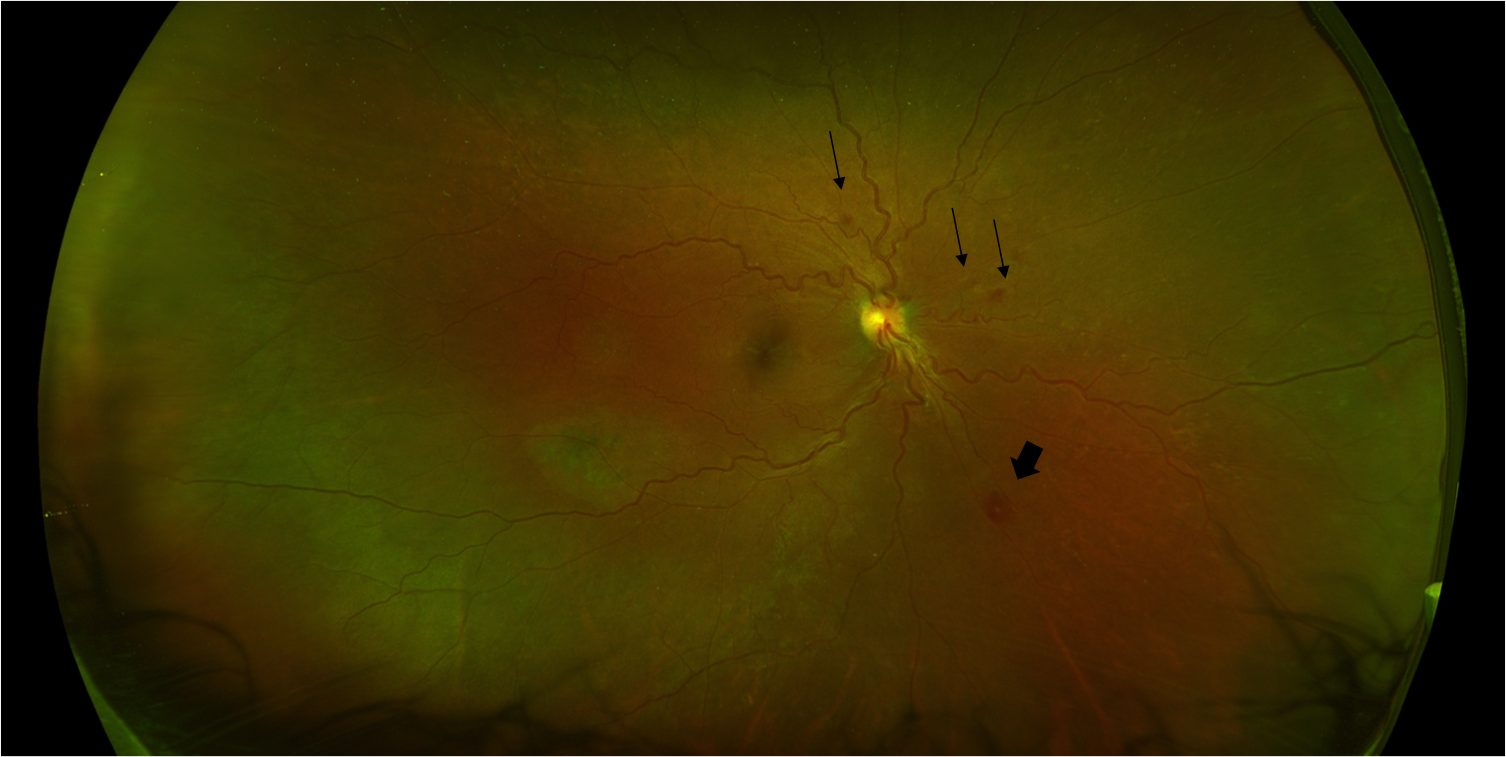