The anatomy of the head and neck is complicated due to the sheer number of fine structures in that region and many of which have variable depth and course. From a clinical standpoint, the head and neck maintain several critical neurovascular structures that have essential functions and potential disastrous surgical consequences if violated. The neck subdivides into smaller regions, zones, and compartments to help with maintaining the organization of this highly complex area. The two primary regions of the neck are the anterior and posterior triangles whose borders are defined by readily identifiable anatomic structures. These triangles are found deep to the skin, subcutaneous tissue, superficial cervical fascia, and platysma muscle and span the entire length of the neck. Within these triangles, muscles, nerves, blood vessels, lymphatics, and adipose tissue are present. The focus of this activity will be to describe the anatomy of the posterior cervical region, including the posterior triangle of the neck, and to relate the anatomy to important clinical considerations.

The function of the Posterior Cervical Region

The pharyngeal apparatus is behind the formation of the structures of the head and neck. The pharyngeal apparatus is composed of six branchial arches that develop in a cranial to caudal direction. Each arch contains mesoderm and neural crest cells that form cartilage, nerves, fascia, and muscles. The arches are lined superficially by the branchial clefts, which are composed of ectodermal tissue. On their deep surface, the arches are lined by endodermal branchial pouches.[4]

The sternocleidomastoid and trapezius muscles, which cover a large area of the posterior cervical region and form the borders of the posterior triangle, develop from somites, and neural crest found just caudal to the sixth branchial arch. One case study cites a congenital absence of the posterior triangle that resulted due to the fusion of the sternocleidomastoid and trapezius. This anomaly can be explained embryologically by the failure of the mesoderm of the sixth branchial arch to separate and ultimately degenerate.[5]

The union of the lymphatic system and circulatory system also occurs in the proximity of the posterior cervical region. On the right side of the body, the right lymphatic duct empties into the junction of the right internal jugular and right subclavian veins. This vessel drains lymph from the right side of the head and neck, the right upper extremity, and the right hemithorax. The thoracic duct drains the lymph from the rest of the body. The thoracic duct empties into the junction of the left internal jugular and left subclavian veins.[8]

The eleventh cranial nerve, also known as the spinal accessory nerve, provides motor innervation to both the sternocleidomastoid and trapezius muscles. After it exits from the skull through the jugular foramen, the accessory nerve runs along the deep surface of the sternocleidomastoid. It descends through the posterior triangle in an oblique direction. The accessory nerve is enclosed in investing fascia as it crosses the triangle and continues to the deep surface of the trapezius.[9]

The largest muscles of the posterior cervical region are the sternocleidomastoid and the trapezius. The margins of these muscles form the anterior and posterior borders of the posterior triangle, respectively. The sternocleidomastoid muscle originates at the anterior surface of the manubrium and the medial one-third of the clavicle. It inserts at the mastoid process and lateral aspect of the superior nuchal line. The action of the sternocleidomastoid is the contralateral rotation of the head and ipsilateral flexion of the neck. The trapezius is a broad muscle that has an extensive origin from the superior nuchal line and the spinous processes of cervical vertebra II through thoracic vertebra II. It inserts on the posterior aspect of the lateral one-third of the clavicle, the acromion, and the spine of the scapula. The action of the trapezius is to elevate, adduct, and depress the scapula. It also assists in the rotation of the scapula during arm abduction above the horizontal.[12][13]There is only one muscle located within the true boundaries of the posterior triangle, the inferior belly of the omohyoid. This muscle passes through the triangle in an anterior to posterior direction about 2.5 cm above the clavicle and can further subdivide the large posterior triangle into the smaller occipital and subclavian triangles. The omohyoid muscle is wrapped in a layer of fascia called the infrahyoid layer of the pretracheal fascia. The infrahyoid fascia is another component of the deep cervical fascia, in addition to the investing layer and prevertebral layer.[1] There are several more posterior cervical muscles located just deep to the posterior triangle that are ensheathed by the prevertebral layer of deep cervical fascia, known as the prevertebral muscles. Because this fascial layer composes the deep border of the posterior triangle, these muscles can also be considered the floor of the posterior triangle. These muscles include the anterior, middle, and posterior scalenes and the levator scapulae.[2][3]

There exists some degree of variation among the anatomy of the posterior cervical region of different individuals, most notably involving the nerve point of the neck. The final destinations of the cutaneous branches of the cervical plexus are relatively predictable, but there is significant variability in their origins.[10] Once the spinal nerve pierces the investing layer of the deep fascia, it branches to form its four cutaneous branches. However, this branch point is often unpredictable. The nerve may split before emerging from the investing fascia so that anywhere from one to four cutaneous nerves pierce the investing fascia individually. It is also possible that the transverse cervical and suprascapular nerves travel together for a greater distance before splitting, while the same is true of the lesser occipital and posterior auricular nerves.

Another method of anesthesia that involves the posterior cervical region is an interscalene block. This procedure targets the roots and trunks of the brachial plexus to provide local anesthesia for orthopedic procedures involving the clavicle or humerus. To perform an interscalene block, the anesthetist typically inserts the needle posterior to the clavicular head of the sternocleidomastoid, through the prevertebral fascia, and into the interscalene groove. This procedure is accomplished using ultrasound guidance to locate the superior, middle, and inferior trunks of the brachial plexus. The trunks are visible as hollow circles on ultrasound organized in a "stoplight" pattern.[15][11]

It is also important to understand that many major structures are susceptible to incidental injury during surgery of the posterior cervical region, including the accessory nerve. To minimize the risk of injury, the accessory nerve can be directly stimulated intraoperatively to map its course and innervation territory.[16] This mapping allows the surgeon to visualize the path of the nerve better and avoid any potential intraoperative damage.

Cervical lymphadenopathy is a common presentation of various disease processes. A lymph node may become enlarged for a variety of reasons, and a physical exam is essential to determine the etiology of the lymphadenopathy. Soft, tender lymph nodes typically result from acute inflammatory processes, such as infectious mononucleosis or streptococcal pharyngitis. Large, firm, rubbery lymph nodes are often due to a more chronic condition, such as lymphoma.[17]

Another point of clinical relevance involving the posterior cervical region is an injury to the nerves of the posterior triangle. Injury to the accessory nerve can result in difficulty shrugging the shoulder or elevating the arm above the head because the trapezius muscle is compromised. If the accessory nerve suffers damage within the posterior triangle, the sternocleidomastoid muscle is spared because the accessory nerve already gives its motor branches to this muscle more proximally.[18] The cutaneous branches of the cervical plexus are also susceptible to injury from both trauma and iatrogenic causes and can result in sensory deficits over the cervical region. The particular nerve that is injured is identifiable by understanding the sensory distribution of the cervical plexus. 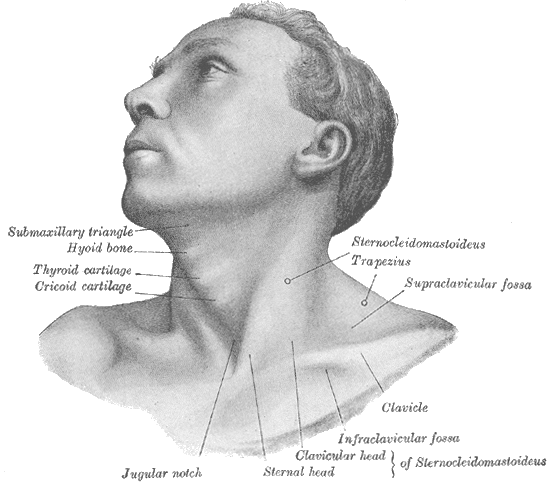 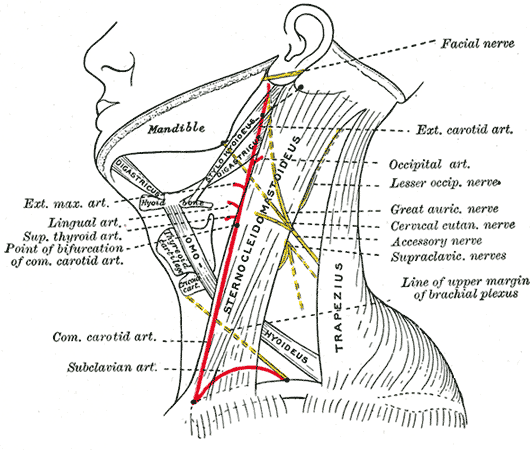 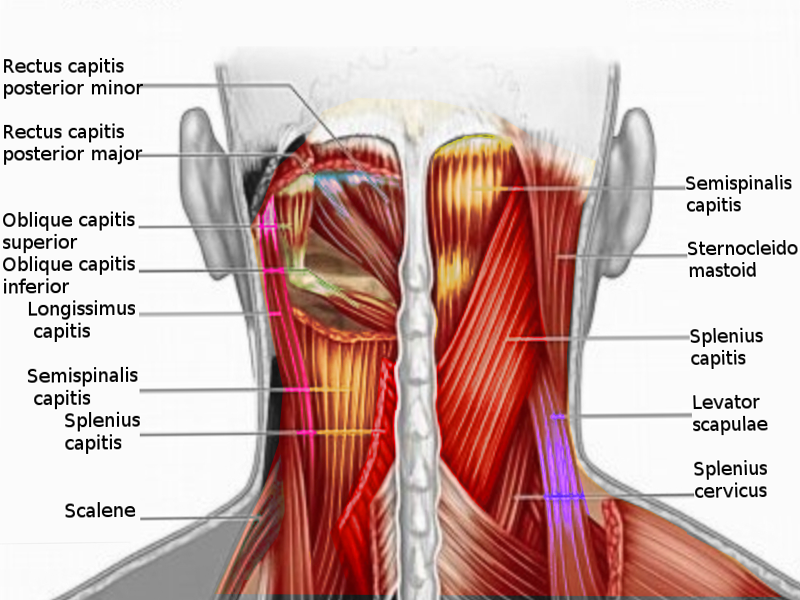