For clarity, the structure and function of the arteries of the forearm will be discussed separately for each artery.

The radial artery is the smaller of the two branches of the brachial artery at the level of its bifurcation. It branches off the brachial artery anteromedial to the biceps tendon, and courses inferolaterally along the forearm.[5] It travels down the arm together with the superficial branch of the radial nerve, deep to the brachioradialis. In the distal forearm, it lies lateral to the flexor carpi radialis tendon. At the level of the distal radius, the radial artery sends off the superficial palmar branch, which anastomoses with the superficial palmar arch, and sends off palmar and dorsal carpal branches to the wrist, which anastomose with the carpal branches from the ulnar artery. The radial artery then courses through the floor of the anatomical snuffbox, through the first dorsal interosseous muscle, and sends off arterial branches to the hand, where it terminates as the deep palmar branch, the main blood supply to the deep palmar arch.

The radial artery mainly supplies blood to the wrist and hand, as it does not have many branches in the proximal forearm. It is the main blood supply of the lateral hand and lateral three digits. It forms part of the blood supply of several forearm muscles. It supplies the radial nerve and helps supply the elbow joint.

The radial recurrent artery branches laterally off the radial artery in the cubital fossa anterior to the biceps tendon.[6] It travels superiorly up the arm between the brachioradialis and brachialis muscles and crosses the elbow joint. It terminates by anastomosing with the radial collateral artery just proximal to the distal humerus. The radial recurrent artery provides blood supply to the elbow joint, brachialis, brachioradialis, and other forearm muscles.

The anterior ulnar recurrent artery is the first branch of the ulnar artery. It branches medially in the cubital fossa and travels superiorly up the arm between the brachialis and pronator teres.[7] It courses anterior to the medial epicondyle and anastomoses with the inferior ulnar collateral artery just proximal to the distal humerus. The anterior ulnar recurrent artery provides blood to the elbow joint and pronator teres muscle.

There is more than one theory on the embryologic development of the arteries of the arm. One theory suggests that the seventh intersegmental artery gives off a branch, the axis artery, which distally branches into the axillary, brachial, and interosseous arteries.[12] A separate superficial brachial artery allows the brachial and axillary branches to anastomose. The medial, ulnar, and radial arteries then form, and the superficial brachial artery involutes. The radial artery initially originates proximal to the ulnar artery, but as time progresses, the portion proximal to the ulnar artery involutes. Many of the variants in forearm anatomy, especially of the radial artery, are hypothesized to be a result of improper involution or branching during embryologic development.

Several different arteries supply the various muscles of the forearm. Clinically, this allows for harvesting of the forearm arteries without causing permanent damage to the arm. The common interosseous and recurrent interosseous arteries are not known to supply any muscles. For clarity, the arterial supply to the forearm musculature is listed below, organized by the artery.

The radial artery is a popular access site for endovascular procedures such as cardiac catheterization and uterine fibroid embolization. It also can serve as a flap in reconstructive surgery.[20] Both the ulnar and radial arteries are useful as potential coronary artery bypass grafts.[21] The radial artery is the primary site for placement of arterial lines that have a use for blood pressure monitoring during surgery. Due to collateral circulation at the wrist and hand, which receive blood from the radial, ulnar, and interosseous arteries, occlusion or harvest of the radial or ulnar arteries usually does not cause complications such as ischemia of the hand. However, patients with anatomic variations of the arteries of the hand can develop ischemia. The radial artery can spasm during the placement of catheters or sheaths into it, and medications such as nitroglycerin and verapamil can be used to prevent or reduce spasm.

The most common place to evaluate a patient’s pulse is the radial artery at the wrist. Due to its superficial course near the lateral wrist, the radial artery is easily palpable. The ulnar artery is also palpable at the medial aspect of the wrist. Both arteries can be occluded with manual compression, which is done in the Allen test. The Allen test assesses the collateral circulation of the hand prior to performing any procedures that could involve the forearm arteries.

The radial artery is the primary site for the placement of arterial lines used for blood pressure monitoring. It is also the most common artery punctured to procure a sample for arterial blood gas analysis. When arterial catheters are left in for several days, complications such as infection, spasm, and occlusion can occur.[20]

The radial artery is commonly used as an access site for endovascular procedures. This is becoming more common as evidence suggests that there are fewer vascular access complications when using the radial artery compared to the femoral artery, without any negative effects on the success of the procedure.[22] Radial access is used for cardiac catheterization, uterine fibroid embolization, renal artery stenting, prostate artery embolization, peripheral arterial intervention, visceral arterial intervention, and many other endovascular procedures. Anatomic variants such as a brachioradial artery may make procedures using radial access more difficult. The vessel may be tortuous near its origin and navigating it could prove difficult. The radial artery has a smaller diameter than the common femoral artery, which limits the size of the sheaths and catheters that can be used.

The radial artery can be harvested for use in coronary artery bypass grafting. Ischemia of the hand is prevented in most cases due to the extensive collateral circulation from the ulnar and interosseous arteries. Evidence suggests that radial artery grafting is superior to saphenous vein grafting, as data shows a lower incidence of occlusion and adverse cardiac events when using a radial artery graft.[24] The ulnar artery can also be used as a graft. When one of the arteries of the forearm is harvested for grafting, the other arteries of the forearm compensate by increasing their diameter and blood flow.[20] It is important to evaluate the collateral circulation of the hand using the Allen test or with ultrasound before harvesting one of the arteries. This can help prevent any ischemic complications.

Another area of clinical significance for the arteries of the forearm is in reconstructive surgery using forearm flaps. In these surgeries, tissue from the forearm is harvested along with its blood supply and then attached to the area of the body in need of the flap. Keeping the blood supply together with the tissue allows for healing in a damaged area that cannot supply blood to a skin graft. The most common forearm flaps are the radial forearm free flap and ulnar forearm free flap.[25] There are published reports of other forearm arteries and their perforators being used for forearm flaps, including the posterior ulnar recurrent artery, the posterior interosseous artery, and the anterior interosseous artery.[7][26][27] These arteries and their perforating branches can be safely harvested with the adjacent tissues without detriment to the arm because of the extensive collateral circulation that exists in the forearm and hand.

The adventitious cystic disease of the radial artery is a pathology that is difficult to find, but real. It appears as a painful mass in the forearm. It attaches with a stem at the intra-mural level of the artery. The approach is always surgical. 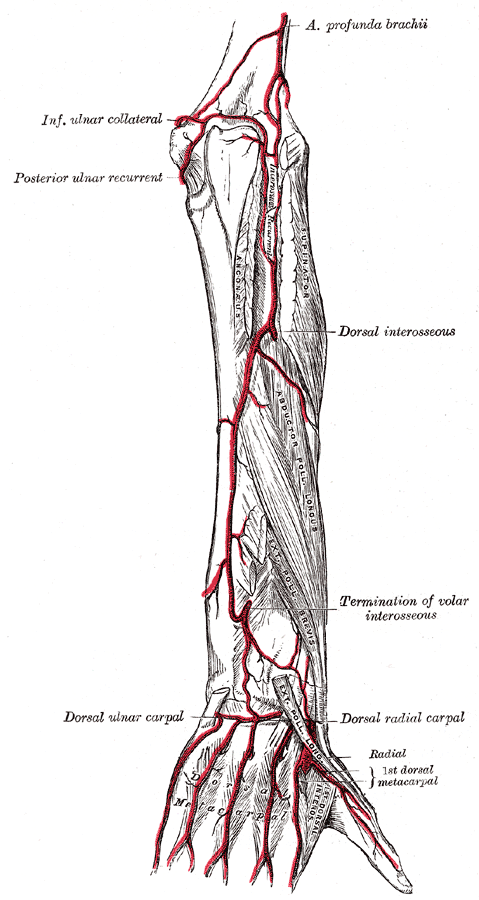 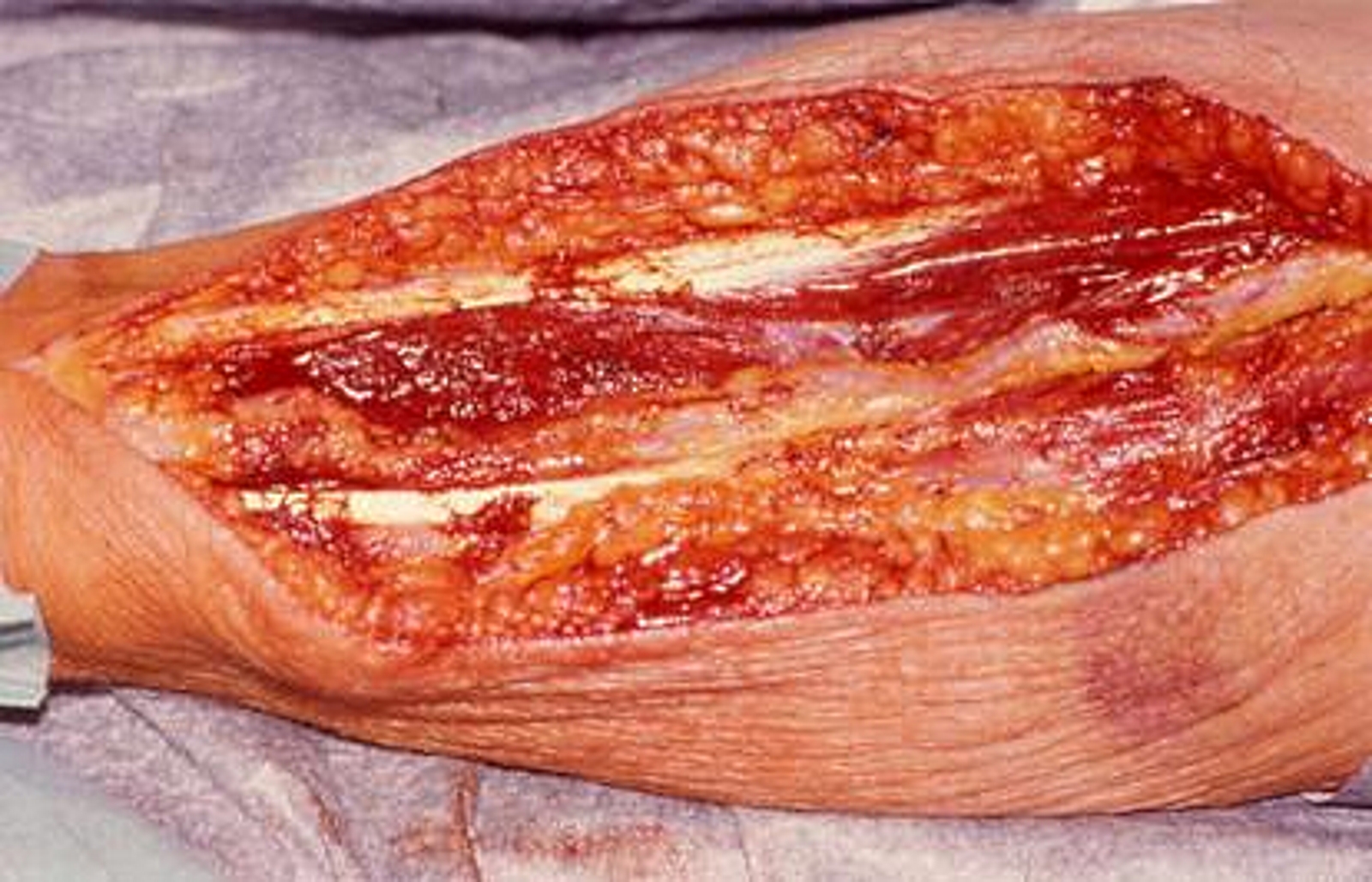 The photo shows the radial artery in preparation for its use for a cardiac bypass. The length of the graft (20 cm or more) allows access to all the myocardial territories and the diameter of the lumen is well suited to that of the major coronary vessels.
Contributed by Bruno Bordoni PhD

Rodríguez-Niedenführ M,Vázquez T,Nearn L,Ferreira B,Parkin I,Sañudo JR, Variations of the arterial pattern in the upper limb revisited: a morphological and statistical study, with a review of the literature. Journal of anatomy. 2001 Nov;     [PubMed PMID: 11760886]