The axilla is an anatomical region under the shoulder joint where the arm connects to the shoulder. It contains a variety of neurovascular structures, including the axillary artery, axillary vein, brachial plexus, and lymph nodes. There are five anatomic borders of the axilla: the superior, anterior, posterior, lateral, and medial walls[1].

The medial wall is the serratus anterior and the first four ribs. The humerus, the coracobrachialis, and the short head of the biceps form the lateral wall. The pectoralis major and minor muscles make up the anterior wall. The clavicle, scapula, and first rib comprise the superior wall. The posterior wall is the teres major, subscapularis, and latissimus dorsi muscles.

The axillary walls are used as landmarks by surgeons to prevent damage to the neurovascular structures within the axilla during surgery. Radical mastectomy, a surgery involving removal of the breast, the underlying chest muscles, and the axillary lymph nodes, is a common cause of injury to the long thoracic nerve, which can lead to a winged scapula.

The brachial plexus is the principal nervous structure in the axillary area. It innervates the muscles around the axilla, the shoulder, and upper limbs. It originates from the spinal nerve roots of C5-T1. It consists of 5 roots, three trunks, six divisions, three cords, and five branches. The five roots merge into three trunks, which are the superior, middle, and inferior trunks. The three trunks connect to form six divisions which merge into three cords. The three cords are the lateral, posterior, and medial cords, which are named with reference to their relationship to the axillary artery. The three cords then divide into five branches, which are the musculocutaneous, axillary, radial, median, and ulnar nerves.[4]

Axillary lymph node biopsies are important in the diagnostic evaluation of cancers such as breast cancer, lung cancer, and melanoma. Understanding the anatomy of the axilla is important for surgeons during the evaluation and removal of lymph nodes. Iatrogenic injury is preventable through being thoroughly aware of the anatomical variants that exist in the axilla.[10]

The long thoracic nerve is close to the axillary lymph nodes and is at risk of injury during lymph node removal or radical mastectomy. Damage to the long thoracic nerve leads to a winged scapula, which is a condition in which the scapula abnormally protrudes from the back.[11][12] Affected patients complain of upper extremity weakness and restrictions in the shoulder joint range of motion. Muscle strengthening and pain management help to treat the condition.[12] 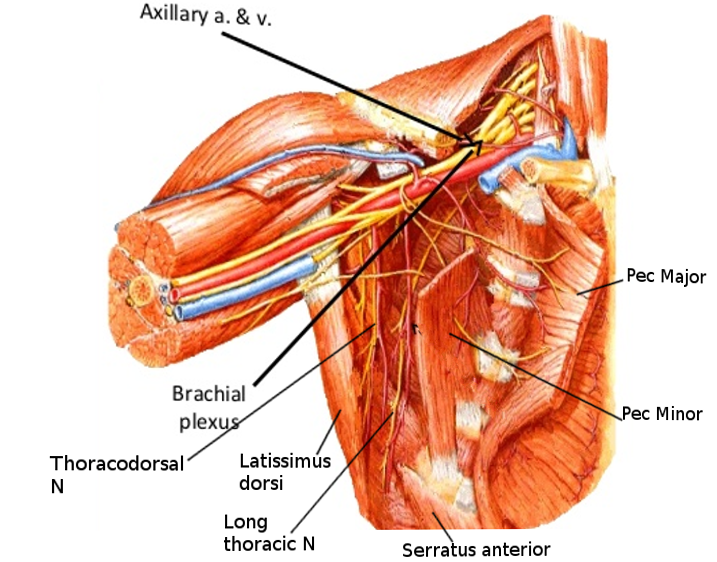