The network of veins in the lower extremities, abdomen, and pelvis is composed of various superficial and deep veins. Perforating veins join together the superficial and deep veins by traveling across the muscular fascia. Superficial veins are located between the skin and muscular fascia, while deep veins accompany arteries and drain muscles. Intima, media, and adventitia compose the vein wall. The intima is anti-thrombogenic due to the in situ production of prostaglandin I2, cofactors of antithrombin, and tissue-type plasminogen activator. Three smooth muscle layers, combined with collagen and elastin, make up the media. While the adventitia is the thickest and outermost layer of the vein wall.[1]

The primary function of the pelvic veins and gastric veins is to drain deoxygenated blood and return it to the heart. Forming in the abdomen at the level of the fifth lumbar vertebrae, the common iliac vein forms through the unification of the external iliac vein and the internal iliac vein. Each set of external and internal iliac veins on the right and left sides of the body form an associated left or right common iliac vein. The left common iliac vein and right common iliac vein join to form the inferior vena cava (IVC).[1] Furthermore, the gastric veins play a significant role in returning deoxygenated blood into the systemic venous circulation. A major pathway, the left gastric vein, brings blood flow into the esophageal varices via the upper stomach.[2] This vein is also known as the gastric coronary vein and serves an essential role in the venous system of the stomach.[3] Additional major abdominal veins are present near the abdominal wall. The venous drainage of the superficial anterolateral abdominal wall involves an elaborate subcutaneous venous plexus. This plexus drains superiorly and medially to the internal thoracic vein. It drains superiorly and laterally to the lateral thoracic vein. Further, the plexus drains inferiorly to the superficial epigastric vein and the inferior epigastric vein, which are tributaries of the femoral vein and external iliac vein, respectively.[2]

Gonadal veins are one of the visceral veins which branch from the internal iliac vein. The left gonadal veins drain into the left renal vein, while the right gonadal vein joins the IVC. These veins can help prevent reflux.[1]

Cardinal veins provide the majority of venous drainage into the sinus venosus during embryogenesis. The anterior cardinal veins drain cranial portions of the embryo, while the posterior cardinal veins drain the caudal portion. These posterior cardinal veins regress, except for the iliac anastomosis, supracardinal, and subcardinal sections.[5] The supracardinal piece gives rise to the inferior vena cava (from which the gastric veins derive) between the sixth and eighth gestational weeks, while the iliac anastomosis gives rise to the common, external, and internal iliac veins.[5][2] This development is critical because any malformations during this growth can result in agenesis of the common iliac vein.[5]

For pelvic tributaries, the internal, external, and common iliac lymph nodes drain the pelvis and its contents. There are generally two pelvic lymphatic pathways. The first is an upper paracervical that courses along the uterine artery with draining external iliac lymph nodes. The second is a lower paracervical pathway that runs along the uterine vein to the hypogastric area.[7][8]

Active forces from compartmental muscle pumps from the pedal, calf, and thigh account for the majority of deep venous return from the lower extremities. Intracompartmental pressure increases with muscle contraction, which facilitates flow across the unidirectional valves in the veins. The calf muscle has the largest capacitance, and as a pump, it creates the highest pressures. According to one study, the calf muscle has an ejection fraction of about 65% compared to 15% from the thigh pump. Similarly, the facilitation of the blood flow in the veins of the feet occurs via intra-pedal muscular contractions.[1]

Congestion and obstruction are two themes of pathology for the venous system in the lower abdomen and pelvis. In cases of pelvic venous congestion and iliocaval obstruction, the pelvic venous pathways are of significant importance. Ovarian venous and internal iliac tributary insufficiency is usually associated with the varicosities of the vagina, vulva, and posteromedial thigh. Chronic pelvic vein congestion accompanies varicosities of the posteromedial thigh. Pelvic venous congestion and chronic left lower-extremity venous hypertension may become aggravated if extrinsic compression upon the left common iliac vein occurs.[1] Also, Iliac vein compression syndrome (IVCS) is a significant contributor to deep vein thrombosis, which is more common in pelvic veins than other veins.[14] Compression of the left common iliac vein by the fifth lumbar vertebra and the right iliac artery characterizes IVCS. This condition can lead to inflammation, scarring, local intimal injury, and, ultimately, a spectrum of venous occlusive lesions. As a result of this collateral circulation occurring over time, patients with IVC may not present any clinical symptoms early on. Though clinical symptoms are typically not present in the early stages, left lower limb deep vein thrombosis has an increased incidence with IVC. As mentioned above, many patients presenting with IVCS have no vascular-related symptoms, and young women are most commonly affected. Vascular-related symptoms include venous diseases, varicose veins, edema, swelling, ulcers, and hyperpigmentation.[14]

Pelvic congestion syndrome occurs in the lower abdomen with varicose veins, which is another chronic condition in women. Patients present with a primary complaint of chronic pain, often a constant dull ache that becomes further aggravated when standing. There is speculation that low oxygenation worsens pelvic venous congestion, which could then promote lower urinary tract dysfunction. Pelvic ischemia caused by hypertension and arteriosclerosis could flow.[15]

Anatomical variants of the pelvic veins can also add crucial information in diagnosing possible disease states and the prevention of these states. Supine hypotensive syndrome occurs due to IVC obstruction. As a result of IVC obstruction, the body must use other venous systems to return the blood to the heart. To do so, the inferior epigastric vein and anastomosis of the external iliac vein, comprising the superficial collateral system, connect the drainage of the abdomen to the superior vena cava. Furthermore, this completely bypasses the IVC.[5]

Iwanaga et al. discovered a technique termed air dissection. Air is first insufflated in the IVC and then its tributaries. In a specific case, the right internal iliac vein was only visualizable using air dissection.[5] 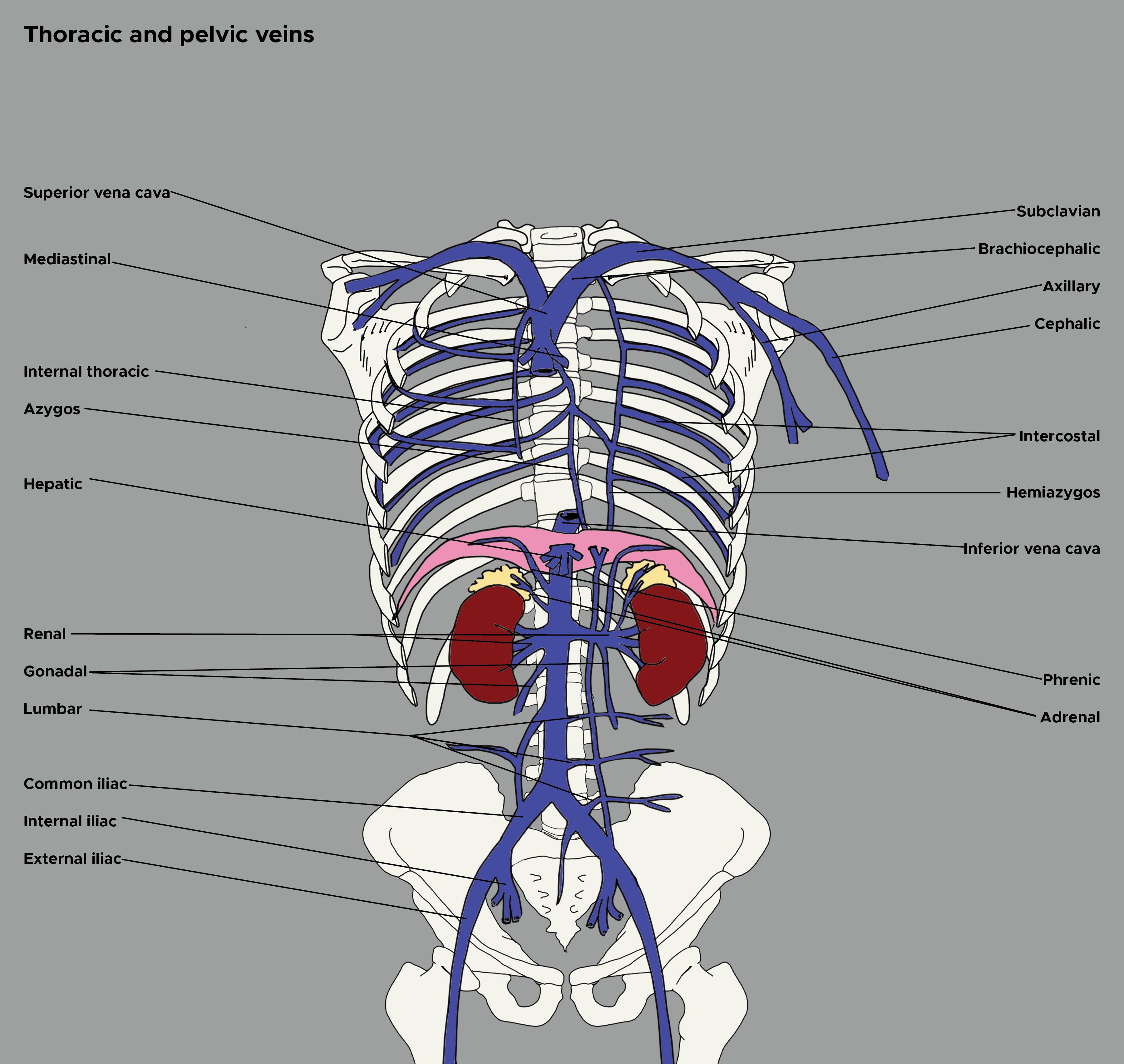