In aerospace medicine, the focus is on prevention of disease when physically healthy individuals, pilots, and astronauts often screened to the point of extraordinary health, are then placed in a hostile environment.[1][2][3]

To help mitigate the effects of oxygen, pressure and temperature fluctuations as well as other environmental considerations such as microgravity, all of which have a significant impact on wellness, the cornerstones of health maintenance in the aerospace environment are eating and exercise habits.

In a relatively short duration in an aeronautic environment, the rewards of terrestrial diligence pay off particularly in high G environments such as military aircraft, where deconditioning and dehydration place the pilot at increased risk for loss of consciousness (LOC). Another example is in protracted air travel such as international flights where deconditioning, dehydration, and immobility increase the risk of deep venous thrombosis (DVT) in a traveler.

Health maintenance and wellness pose a much greater challenge in space.

In space, all food must be carried and stored on the ship. An important consideration is that nutrition and conditioning will need to be maintained for the duration of any mission; an exploration of Mars, for example, will take approximately 2.5 years.

Space travel is not yet as common as commercial air travel, where there may be no screening for pre-existing health conditions and any age considerations will be self-imposed.[4][5][6]

Current counter-measures to preserve health maintenance in the microgravity environment focus on mitigating the effects of fluid shift and decreased workload discovered from the earliest expeditions into space. Our understanding has steadily increased over subsequent decades as research and knowledge accumulated with the technological advances that allowed humans to spend progressively more time in space from brief visits to the current orbiting facility, where astronauts now work and live in space for periods that can extend to a year and more.[7][8]

Initial experience with microgravity left scientists wondering whether it was possible to ingest food and absorb nutrients in microgravity. In 1962, John Glenn became the first American to eat in space by consuming applesauce that was packed in a tube. This successful meal established that it was indeed possible to eat, swallow, and digest food in a weightless environment.

Because effort is significantly less in the absence of gravity, astronauts were given 2500 calories/day (instead of their normal 3000 Cal/day).

Weight and size are primary considerations for anything launched into space, so the food brought for each mission was freeze dried, involving a process where cooked food is quickly frozen and then dehydrated with all but one percent of the water removed. Immediately prior to eating, the food was moistened with onboard water in orbit; however, since only cold water was available, all meals were eaten cold.

On Gemini 3, astronaut John Young surprised fellow astronaut Virgil Grissom with a corned beef sandwich on rye, which was purchased at a delicatessen in Cocoa Beach and one of two meals smuggled on board by the enterprising crew member to sample during the 5-hour mission). Unfortunately, Grissom did not finish the sandwich because it was producing crumbs; this is an important consideration with the potential for eye foreign body or aspiration in the absence of gravity. This lesson caused bread, in subsequent years, to be primarily replaced with tortillas.

Calories were increased to 2800/day and hot water was now available for food preparation.

On Christmas Eve, 1968, astronauts enjoyed thermo-stabilized turkey with gravy and cranberry sauce that they could eat with a spoon. It was the first time a meal did not require rehydration.

Still, the majority of meals were freeze-dried.

While deconditioning became obvious in space travelers returning from longer missions which included orbiting, landing on, and brief exploration of the moon, capsule size constraints precluded much in the way of counter-measures.

Fortunate advances occurred for astronauts. The space station used solar cells for power, rather than the water-producing fuel cells used until this time, so dehydrated foods were used less in order to conserve the water supply. Skylab had a full galley, and astronauts could prepare and eat the meals they chose. The menu was expanded to 72 items, and there was refrigeration so frozen food could be carried and stored including what would become an astronaut favorite, ice cream.

Of significance was that the larger structure permitted a key component of health maintenance in the space environment: exercise to mitigate bone loss. Astronauts would begin to use resistive bands as well as a stationary bike to stave off the deconditioning effects of microgravity.

From 1981 to 2011, the first re-usable spacecraft flew a total of 135 missions. The average mission was approximately 10 days; the shortest was just over one minute (STS-51-L when Challenger tragically broke apart during launch) and the longest was 17 days (STS-80 flown by Columbia).

The Space Shuttle, like Skylab, had a galley. This galley contained a water dispenser for rehydrating meals and an oven for heating food to a suitable temperature. Conventional utensils such as forks, spoons, and knives were used as well as a pair of scissors for cutting open food container bags.

Although there was a galley and a refrigerator, almost all food was precooked or processed, making it ready-to-eat after adding water or heating. A small amount of fresh fruit and vegetables were available, stowed in a food locker.

Weight remained a primary consideration, so food was restricted to 3.8 pounds per crew member per day and included 1 pound of packaging for each astronaut each day.

Although the missions were relatively short, conditioning remained a priority in part because of the obligation to pilot a spaceship turned glider to landing after being re-subjected to the forces of gravity. Consequently, a treadmill was flown and regular exercise performed by the crew.

Besides sleeping and eating, astronauts spend the most amount of their time, 2.5 hours each day, exercising and acknowledge this as the number one health priority.

A consideration for future space travel is preserving the 1G environment of Earth by rotating an entire spacecraft; however, size and cost restraints remain prohibitive at this time. Rotating a portion of the spacecraft may be possible but is expensive and presents engineering challenges. A possible solution is currently being developed at National Aeronautics and Space Administration (NASA) Ames Research center which involves a human powered, one to two person, centrifugal bicycle to be used in the spacecraft, thereby simultaneously taking advantage of both exercise and rotation components. Combining the benefit of exercise with the resulting effect of a generated 1 G force, while preserving a reasonable footprint, could potentially mitigate the effects of microgravity in a long duration space mission.

At present, conditioning in space is provided by the Advanced Resistive Exercise Device (ARED) which simulates free weight exercise in the 1 G environment maintaining muscle strength and muscle mass in the astronaut needed for productivity such as upper body translation during extravehicular activity (EVA) and safety when transitioning from microgravity to gravity imposed by the Moon (one-sixth of Earth), Mars (one-third of Earth), and as well as for return to Earth itself. Cardiovascular health is maintained with a treadmill in addition to a stationary bicycle (located in the laboratory module) and is a key component of many experiments which require monitoring while in motion including measuring aerobic fitness.

The current diet on the International Space Station (ISS) is well-balanced but repetitive, and durable food (dehydrated, thermostabilized) predominates. Although energy requirements are reduced in microgravity as a result of the decreased work needed to accomplish a task in the absence of gravity, nutrition and palatability remain important considerations and challenges.

As on Earth, the sight, texture, and type of palatable food is an important component of both physical as well as psychological health in astronauts who will take on the daunting task of a long duration mission (for example going to Mars which is a goal for NASA as well as commercial businesses).

Growing food in space is still in its infancy, with the first successful crop yielded at the end of 2015, and limited to a few vegetables. Because calories in and calories out are closely monitored and weight is a premium, nutrient dense pre-packaged food with extended shelf life will remain the standard for the foreseeable future supplemented by fresh produce, the extent to which is being actively deliberated.

Canned food, the traditional Russian method of nourishment adopted early in their space program and relatively unchanged, carries an additional risk of injury/infection from packaging as well as weight burden.

As on Earth, diet and exercise are key to health maintenance and wellness in the aerospace environment; although, the size and weight restrictions as well as limitations posed by a microgravity environment present significant challenges to overcome.

The numerous stressors in space are all exacerbated by mission length. An exploration mission to Mars is expected to take on the order of 2.5 years. Extreme isolation and austere surroundings would be intensified by processed, pre-packaged food and a monotonous menu. The preservation process, removing water and reducing temperature/time restrictions results in food that is blander to the palate and eye. It also concentrates, among other things, salt, so the food consumed by space crews is at risk of being less healthy than a diet of fresh produce which, at present, is ideal though not feasible.

The logistics of carrying and preserving every meal to meet the needs of an entire crew (four to six or more) for the length of a deep space mission, and allowing for any unforeseen problems, is daunting. Using shuttle weight restrictions for food of 3.8 pounds per crew member per day, allowing for six astronauts and 2.5 years, means the rocket taking explorers to Mars would have to allow for an additional 20,805 lbs at takeoff! Pre-positioning meals at Lagrange points as well as on the planet surface is a consideration; however, time and radiation may degrade food quality and nutrients. Of significance, loss or destruction of the pre-positioned supplies would be catastrophic.

Rather than aggravate the psychologic impact of an expected Spartan existence, mealtime should be embraced as an opportunity for providing nutrition while simultaneously promoting an environment of rest, diversion, rejuvenation, comradery, and social interaction.

Greenhouse analogs are being developed to provide fresh vegetables for astronaut consumption, the Veggie system on the United States side and the Lada system on the Russian side of the ISS. In addition to nutrition and atmospheric recycling, the benefits of gardening in space fulfill other important human needs such as the positive psychological impact of augmenting an otherwise austere, sterile environment as well as the positive emotional impact of caring for and cohabitating with living organisms. Moreover, artificially creating agricultural seasons of planting, growth, and harvest would also be an effective method to mark the passage of time on deep space missions.[9]

A significant effect of microgravity is the consequential fluid shift which results in nasal congestion adversely affecting taste. As a result, the visual component of eating is of increased importance and space travelers will have a greater appreciation for piquant foods in their diet.

While diet and exercise are the cornerstones of health maintenance and wellness in the hostile environment of aerospace, an important consideration is the deleterious effects of radiation. Once leaving the protective atmosphere and magnetosphere of Earth, astronauts are subjected to solar and cosmic radiation, so engineering controls to provide shielding are paramount. Solar radiation includes ultraviolet rays, x-rays, protons, and electrons. Cosmic radiation emanates from every direction in deep space and consists of high-energy protons and atomic nuclei which are far more energetic, and therefore more damaging than solar radiation. Because of current concerns of lifetime radiation exposure and resulting cancer, astronauts selected for a long duration, deep space mission will likely be older.

Finally, engineering controls are vital to protecting food from the adverse effects of radiation so that when consumed after long storage, whether onboard ship or pre-placed, nutrient content will be maintained and quality will be preserved. 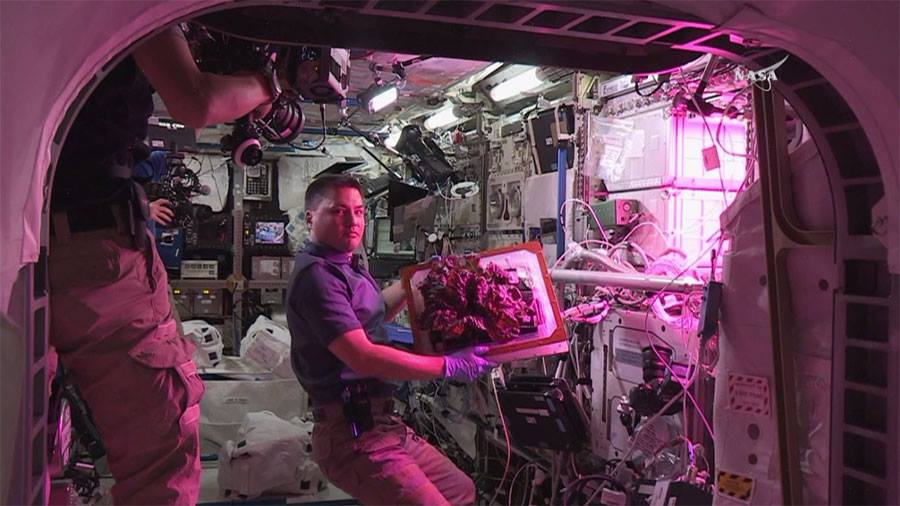