As the human body ingests substances and medications, it utilizes a variety of metabolism and elimination processes. The second focus in this article will be zero and first-order kinetic elimination, which are clinically useful in achieving a therapeutic level of medication and prognostically assessing toxicity levels and implementing treatment. For simplicity, the following discussion will be specific to a one-compartment model, which views the human body as a homogeneous unit. Lastly, while the vast majority of drugs undergo elimination via first-order kinetics, a firm understanding of both zero and first-order kinetics is crucial in a clinical setting, as there can be fluidity between the two types of elimination with the same specific substance.[1]

Determination and understanding of how a particular substance is eliminated are important when administering medications to achieve a therapeutic level and when assessing a patient who ingested a toxic substance. Specifically, in regards to toxicology, if the ingested substance is unknown to the patient and practitioner, routine blood/plasma testing of the substance and analysis of the decline in concentration will aid in the identification of the ingested substance. For example, if the substance follows a zero-order elimination, the amount eliminated will be dependent on time and not the amount ingested, in contrast to first-order kinetics, in which the amount eliminated will be dependent on the maximum blood/plasma concentration and not of time. Furthermore, once the substance and its properties are understood, proper treatment may be given to a patient that ingested a toxic substance.

To achieve a desired therapeutic level of a medication, a clinician must understand the elimination order and utilize the information in subsequent dosing to maintain the therapeutic concentration over a set period. Misunderstanding of kinetic elimination may lead to patients experiencing toxic symptoms and could lead to other iatrogenic adverse effects up to and including death.

The fundamental difference between zero and first-order kinetics is their elimination rate compared to total plasma concentration. Zero-order kinetics undergo constant elimination regardless of the plasma concentration, following a linear elimination phase as the system becomes saturated. A simple analogy would be an athlete signing an autograph on a picture. Regardless of the total amount of photographs that must be signed, the athlete can only sign one autograph every 15 seconds. The rate-limiting factor of this analogy and zero-order kinetics is time.

First-order kinetics proportionally increases elimination as the plasma concentration increases, following an exponential elimination phase as the system never achieves saturation. Furthermore, when attempting to obtain a therapeutic level of plasma concentration or regarding drug toxicity, one must utilize their knowledge of a particular drug elimination kinetic. To utilize the same analogy, now the entire team can sign the photographs. The more photographs there are to sign, the more athletes can sign. The rate-limiting factor of this analogy and in first-order kinetics is the initial concentration.

When administering medications, one must fully understand the mechanism of action and elimination to reduce any unwanted adverse effects. Furthermore, when assessing a patient who may have either intentionally or accidentally ingested a toxic quantity of a substance, knowing that substance's elimination properties will aid treatment and the disease course.

For example, in the case of methanol ingestion, urgent treatment is necessary. Methanol itself results in sedation but is generally nontoxic. The toxicity of methanol is a function of its metabolites. As methanol follows zero-order kinetic elimination, a clinician can understand that the actual danger lies in the time from the ingestion, not the total amount. In contrast to methanol, other specific medications that show zero-order elimination are salicylates, omeprazole, fluoxetine, phenytoin, and cisplatin, which, when ingested at toxic levels, will achieve a higher concentration of the substance within the body over time versus the same amount of the substance that uses first-order elimination.[7]

A firm understanding of the above-described concepts will help reduce the adverse effects of medications on patients and lead the practitioner to choose better treatments for patients experiencing toxicity symptoms. 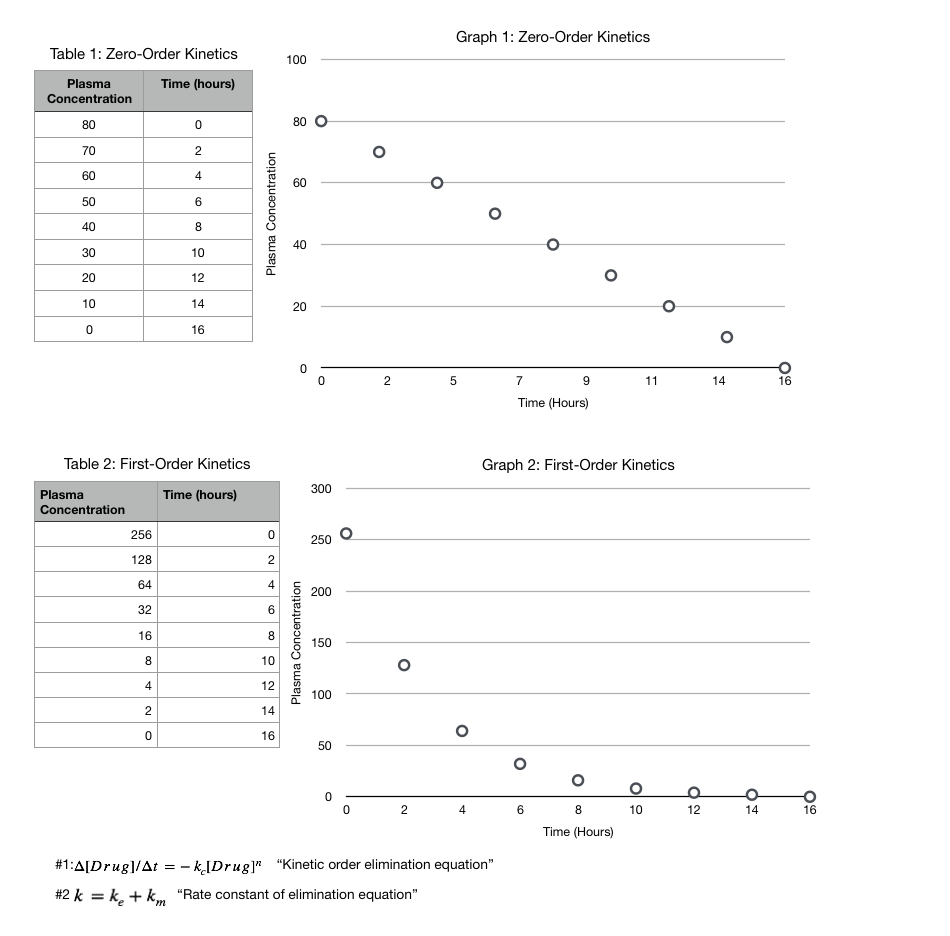