Urea cycle disorders are inborn errors of metabolism resulting from defects in one of the enzymes or transporter molecules involved in the hepatic removal of ammonia from the bloodstream. Removal of ammonia from the bloodstream normally occurs via its conversion to urea, which is then excreted by the kidneys. Consequently, urea cycle disorders lead to an accumulation of ammonia. Ammonia is extremely toxic, particularly to the central nervous system. Newborns with severe mutations in any one of the first four enzymes of the urea cycle can become catastrophically ill within 36 to 48 hours of birth despite appearing normal at birth. It is therefore possible for a newborn to be discharged from the hospital before signs of urea cycle disorders develop. The newborn may subsequently develop signs that go unrecognized at home. Hyperammonemia is key to the diagnosis of urea cycle disorders and treatment should not be delayed while a definitive diagnosis is sought. This activity reviews the evaluation and management of urea cycle disorders and highlights the role of interprofessional team members in collaborating to provide well-coordinated care and enhance outcomes for affected patients and families.

Urea cycle disorders (UCDs) are inborn errors of metabolism (IEMs) resulting from defects in any 1 of the six enzymes or 2 transporters involved in the hepatic removal of ammonia from the bloodstream by conversion to urea which is excreted by the kidneys [1]  IEMs fall into two very broad categories: deficiencies in specific enzymes needed to convert fat or carbohydrate into energy, or deficiencies in specific enzymes needed to break down amino acids or other metabolites thereby allowing them to accumulate and become toxic if not treated.  UCDs fall into the second category. The turnover of proteins releases amino acids, and their deamination generates ammonia.

Ammonia is extremely toxic, particularly to the central nervous system (CNS). Newborns with severe mutations in any one of the first four enzymes of the urea cycle (see figure 1 and below) can become catastrophically ill within 36 to 48 hours of birth despite appearing normal at birth. It is possible, therefore, that a newborn can be discharged from the hospital before signs of UCDs develop and subsequently develop signs that go unrecognized at home. Hyperammonemia is key in diagnosing UCDs and treatment should not be delayed while trying to reach a final diagnosis.

The etiology of UCDs is complex since multiple proteins and 2 subcellular compartments are involved, i.e., the mitochondrial matrix and cytoplasm [2]. The first 2 enzymatic steps in the urea cycle take place in the mitochondrial matrix. In step 1, carbamoylphosphate synthetase I (CPS1) ligates ammonia with bicarbonate forming carbamoyl phosphate which enters the urea cycle (figure 1). Stressors such as sepsis can easily initiate defects in CPS1 result in the most severe form of UCDs and hyperammonemia. It should be noted that N-acetylglutamate is an allosteric activator of CPS1. N-acetylglutamate is formed from acetyl-CoA and glutamate in a reaction catalyzed by N-acetylglutamate synthase (NAG), a mitochondrial enzyme. Defects in NAG, although very rare, mimic CPS1 UCDs and result in hyperammonemia.

In step 2, the liver enzyme, ornithine transcarbamylase (OTC) catalyzes the reaction of carbamoyl phosphate with ornithine to form citrulline (figure 1). The OTC gene (SLC25A15) is located on the X chromosome, and OTC defects are inherited in an X-linked fashion. Defects in OTC are the most common cause of UCDs. OTC deficiency in males results in a severe form of UCD. In females, the severity is variable ranging from asymptomatic to severe depending upon the random nature of X chromosome inactivation. The ornithine needed for OTC must be transported into the mitochondrial matrix, and this task is accomplished by the mitochondrial ornithine translocase (ORNT1) protein. Defective ORNT1, although very rare, can result in hyperammonemia which often manifests itself later in life.

Step 3 and all remaining enzymatic steps take place in the cytoplasm. In step 3, argininosuccinate synthase 1 (ASS1) catalyzes the formation of argininosuccinate from citrulline and aspartic acid. Defects in ASS1 result in both citrullinemia and hyperammonemia. The second mitochondrial transporter, citrin, contributes to the cytoplasmic pool of aspartic acid by transporting aspartic out of the mitochondria and into the cytoplasm where it is needed for the urea cycle. Citrin also transports glutamate from the cytoplasm into the mitochondria. Gene SLC25A13 codes for citrin and defects in this gene can result in both citrullinemia and hyperammonemia.

In the last step of the urea cycle (figure 1), the arginine from step 4 is cleaved into urea and ornithine by the arginase enzyme which is coded for by the ARG1 gene. Defects in arginase can result in both argininemia and hyperammonemia. The signs and symptoms of arginase deficiency usually appear by 3 years of age and without a rapid onset of hyperammonemia.

Overall, the incidence of UCDs has recently been determined to be 1 in 35,000 births. Most State Screening Laboratories currently detect only 2 of all the conditions that cause UCDs. About two-thirds of all USDs are due to mutations in OTC, one-fifth due to ASS1, and one-tenth due to ASL[3].

There has been considerable progress in understanding the pathophysiology of UCDs which may ultimately promote better medical interventions [4].  Hyperammonemia is a key etiological factor in UCDs and plays a key role in CNS toxicity. Although complex, some important concepts are emerging.  The toxic effects of ammonia on the CNS are more severe in the developing brain than in the adult brain.  Whether the toxic effects of hyperammonemia are reversible or not depends upon the exposure time, the dose of hyperammonemia and the stage of neurological development. In the neonatal brain, hyperammonemia results in edema caused by swelling of astrocytes. The subsequent frequency and degree of swelling are key factors in determining the severity of CNS neurological disorders such as seizures, coma, and cognitive/motor deficits.

While OTC deficiency (OTCD) is inherited in an X-linked manner, all other UCDs follow an autosomal recessive pattern. Moreover, there is evidence that even asymptomatic female carriers of OTCD can develop cognitive defects as a result of episodic hyperammonemia.

Newborns with UCDs typically appear normal at birth and shortly after that can present with nonspecific signs and symptoms similar to many IEMs or an infection, i.e., lethargy, poor appetite, vomiting, and irritability. IEMs, in general, should be considered in the differential diagnosis of any infant with such signs. Except for arginase deficiency, most infants with severe UCDs rapidly develop cerebral edema, and subsequent neurological problems, resulting from acute hyperammonemia. Unless treated, hyperammonemia from severe UCDs can progress to coma and death. In cases of mild UCDs, hyperammonemia can result from a variety of stressors such as illness and surgery [4].

A key biomarker for UCDs is hyperammonemia (> 150 micromolar for a neonate and > 100 micromolar for an infant) in the absence of high anion gap and with a normal plasma glucose level.  In addition to plasma ammonia, it is useful to obtain plasma amino acids and plasma lactic acid if metabolic acidosis is present.  The laboratory finding characteristic of UCDs include: (a) elevated levels of plasma glutamine and alanine; (b) decreased plasma arginine (except for arginase deficiency) and; (c) high or low plasma citrulline levels.

Treatment for UCDs, or any IEM, should be done in consultation with an appropriate genetics/metabolic expert. For neonates with hyperammonemia, the immediate treatment goal is a rapid lowering of ammonia and reducing dietary protein intake. Hemodialysis is very effective at reducing plasma ammonia and should immediately be initiated if elevated hyperammonemia is observed. Ammonia scavenger medications such as Ammonul IV are also useful. Ammonul IV acts by removing glycine and glutamate from plasma thereby their reducing contribution to ammonia formation.

The diagnosis and management of urea cycle disorders is complex and best done with an interprofessional team that includes a geneticist, pathologist, pediatrician, nephrologist, internist, biochemist and dialysis nurse/nurse practitioner. Treatment for UCDs, or any IEM, should be done in consultation with an appropriate genetics/metabolic expert. For neonates with hyperammonemia, the immediate treatment goal is a rapid lowering of ammonia and reducing dietary protein intake. Hemodialysis is very effective at reducing plasma ammonia and should immediately be initiated if elevated hyperammonemia is observed. Ammonia scavenger medications such as an IV nitrogen binding agent are also useful. These agents act by removing glycine and glutamate from plasma thereby their reducing contribution to ammonia formation.

The prognosis for most of these infants is guarded.[8][9] 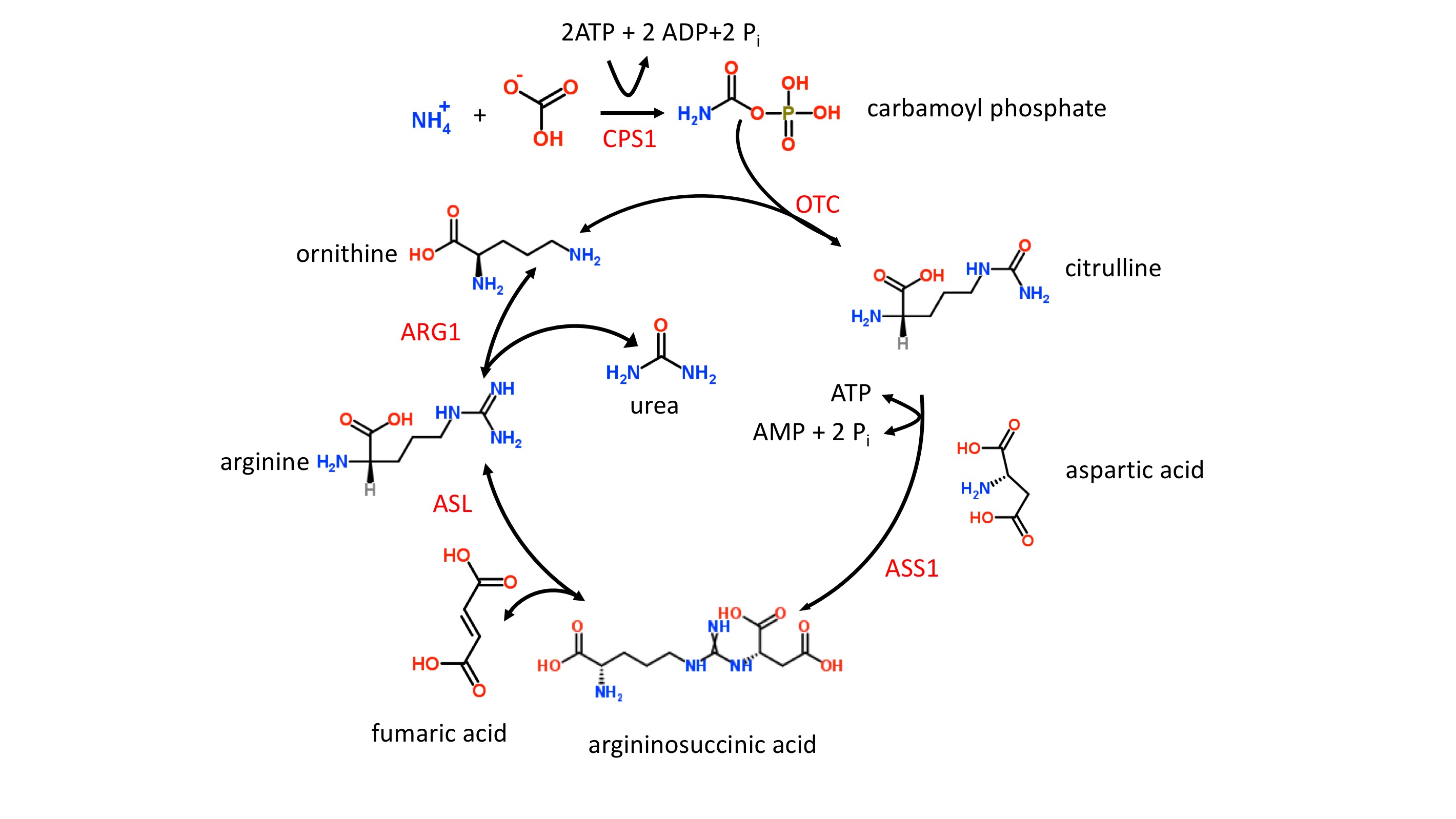