Transcutaneous electrical nerve stimulation, known by its acronym TENS, is a modality that uses electric current to activate nerves for therapeutic reasons. The TENS unit is a small device, often battery-operated, which can sometimes even fit into a pocket. It utilizes electrodes placed on the skin and which connect to the unit via wires to address a targeted therapeutic goal. The units are said to be titratable, permitting for a high degree of user tolerance with few side effects.  Compared to many medications, the device is free from the risk of overdose.  TENS units are often highly adjustable, allowing the user to control pulse width, intensity, and frequency. Low frequency of < 10Hz in conjunction with high intensity is used to produce muscle contractions. High frequencies of > 50 Hz are used with low intensity to produce paresthesia without muscle contractions.  Overall, the concept of TENS throughout history has been the topic of vigorous debate within scientific circles in regards to efficacy. However, while this modality of pain management has proven itself in clinical investigations, there remains to this day disagreement over which pain syndromes and conditions TENS is appropriate.

TENS, in its earliest conceptual form, is believed to date back to approximately 60 A.D. The Roman physician Scribonius Largus proposed symptomatic relief to patients by having the patient be exposed and in contact with an "electric fish" from the ocean. There are also ancient records of the use of electric eels for their pain management benefits — the use of electricity in managing human ailments propagated over time. By the 18th century, there were numerous devices developed to deliver electrostatic exposures with the belief of treating a wide array of conditions, from headaches to cancer, with even Benjamin Franklin being an eventual supporter.

The 19th century started with one particular machine, the "Electreat," leading the way in clinical therapeutic usage of electricity in managing patient disease. However, it had several constraints including large size and limited adjustments. It has been long since abandoned.

The TENS units and functionality as we think of it today are credited to American neurosurgeon Dr. C. Norman Shealy. After completing medical school at Duke University in North Carolina, he had additional training out of Barnes-Jewish Hospital and Massachusetts General Hospital. He spent several years subsequently researching spinal cord stimulators and transcutaneous electrical nerve stimulation, developing what developed into today's TENS units. His early work was an effort to arrive at an impactful therapy for several types of pain including migraines, back pain, and gout.

As the study of transcutaneous electrical nerve stimulation advanced, there came new techniques inherent to the modality, such as intense TENS, acupuncture TENS, and conventional TENS.[1][2][3][4]

TENS is believed to be effective by selectively delivering an activating stimuli to large diameter non-noxious afferents (A-beta) which subsequently reduces pain (via decreased nociceptor activity) and unwanted sensation.[5][6]

The fundamental indication for TENS is seeking to manage pain, both acute and chronic. There is an overall divide across scientific literature regarding the efficacy of TENS application for particular types of pain or pain conditions. While a significant body of work exists which suggests that TENS is effective for neuropathic, nociceptive, and musculoskeletal pain, a notable portion of these studies were noted for methodological concerns.

A look at the three types of TENS is outlined below along with their conceptual indications.

Intense TENS is used primarily as a "counter-irritant." Aiming to target small diameter, high threshold cutaneous afferent (A-delta), this type of TENS specifically seeks to block transmission of nociceptive information in nerves while stimulating other analgesic mechanisms. Both high frequencies and intensities are used for short periods of time.

Acupuncture-like TENS (AL-TENS) is an approach at hyperstimulation and often used in patients that do not respond to conventional TENS. Titration is to low-frequency, higher intensity, longer pulse width. AL-TENS aims to stimulate small diameter, high threshold peripheral afferent (A-delta).

Pregnancy, epilepsy, and pacemaker are all contraindications for TENS.  Additionally, contraindications exist to the placement of the electrode pads in certain areas.  Some of these placements include: over the eyes, trans-cerebrally, the front of the neck, simultaneously positioned anterior and posterior chest electrodes, internally, over broken skin or lesions, over tumors, directly over the spine, regions of severe paresthesia where the user might not recognize skin irritation.[6][9]

It is imperative to read the manufacturer's instruction booklet, as each unit might have slight variances in recommendations. TENS units are now small and lightweight. Patients can place them in their pocket, on a desk, or hold them. Treatment sessions can take place at the convenience of the patient except while operating heavy machinery, driving, bathing, showering, or swimming. The unit should be powered off before placing the pads. Electrode pad placement is at least 1 inch apart in the appropriate dermatomal region of the targeted pain. The skin underlying pad placement must have intact sensation. After powering on the unit, the setting titration is to manufacturer recommendations. Red and black lead placement have little impact on clinical outcomes.[8]

Overall, for the vast majority of people, TENS is believed to be safe and well-tolerated with little to no side effects. However, manufacturers of TENS units universally warn individuals with pacemakers, epilepsy, or are pregnant that these conditions are contraindications to use as they can lead to potential complications. Nevertheless, this has been viewed as more of a medicolegal maneuver in high-risk populations, and TENS units are actually usable in these groups assuming close medical supervision and electrode placement is not in close vicinity to the chest, neck, or abdomen.

Furthermore, there have been some complications with impacting transdermal drug delivery systems if drug application is close to the TENS electrodes.

There have been documented dermatologic complications from using TENS units — the most of these cases relate to either allergic reactions to the electrode pads or contact dermatitis. Special hypoallergenic electrode pads are available for this population. Additionally, syncope and nausea have both been documented as complications of transcutaneous electrical nerve stimulation.

Lastly, there are theoretical risks with using TENS units while driving or operating heavy machinery, so it is therefore recommended to avoid TENS during those activities to avoid the risk of further complication.[9][10]

There is no universal consensus concerning the efficacy of TENS in managing pain. However, there are indeed a number of studies which have found a positive impact on patients with an overall low risk of complications/side effects when using TENS appropriately and according to manufacturer instructions. As such, combining TENS with pharmacotherapy remains a worthwhile endeavor for interested patients willing to try the modality. More research needs to take place to arrive at a definitive position on the place of  TENS in pain management. One characteristic that has universal agreement, however, is that if TENS does provide results, those are short-term in nature and rapid in onset and offset. TENS is not a cure for pain conditions or syndromes.

The positive impact in which TENS has on an individual might diminish over time. Habituation might even lead to a worsening of pain. Recommendations are that patients take breaks from treatment and vary their placement of electrode pads over time.[8][11]

TENS units are available in many different clinical settings. Practitioners utilize them in hospice and palliative care, pain management, orthopedic surgery, neurology, dentistry, chiropractic, and physical therapy. Units have found use in hospitals, clinics, and homes alike. However, before the first TENS treatment, individuals should have a formal pain assessment by an experienced and qualified professionals, as well as given full and clear instructions on how to use the TENS unit. It is just as important to review the medical conditions and contraindicated electrode pad placements. Instructions should be thorough, but easy to understand. The patient should undergo a monitored session of TENS therapy by a trained provider so that they can evaluate for adherence to and comprehension of directions, placement, and titrating the machine. Conventional TENS is the approach first used in individuals new to the modality, often with a continuous pulse pattern of midrange frequencies and durations.[12][6] An interprofessional team approach involving the nurse, allied health professional, and clinician in educating the patient and family and providing follow up will elicit the best results. [Level V] 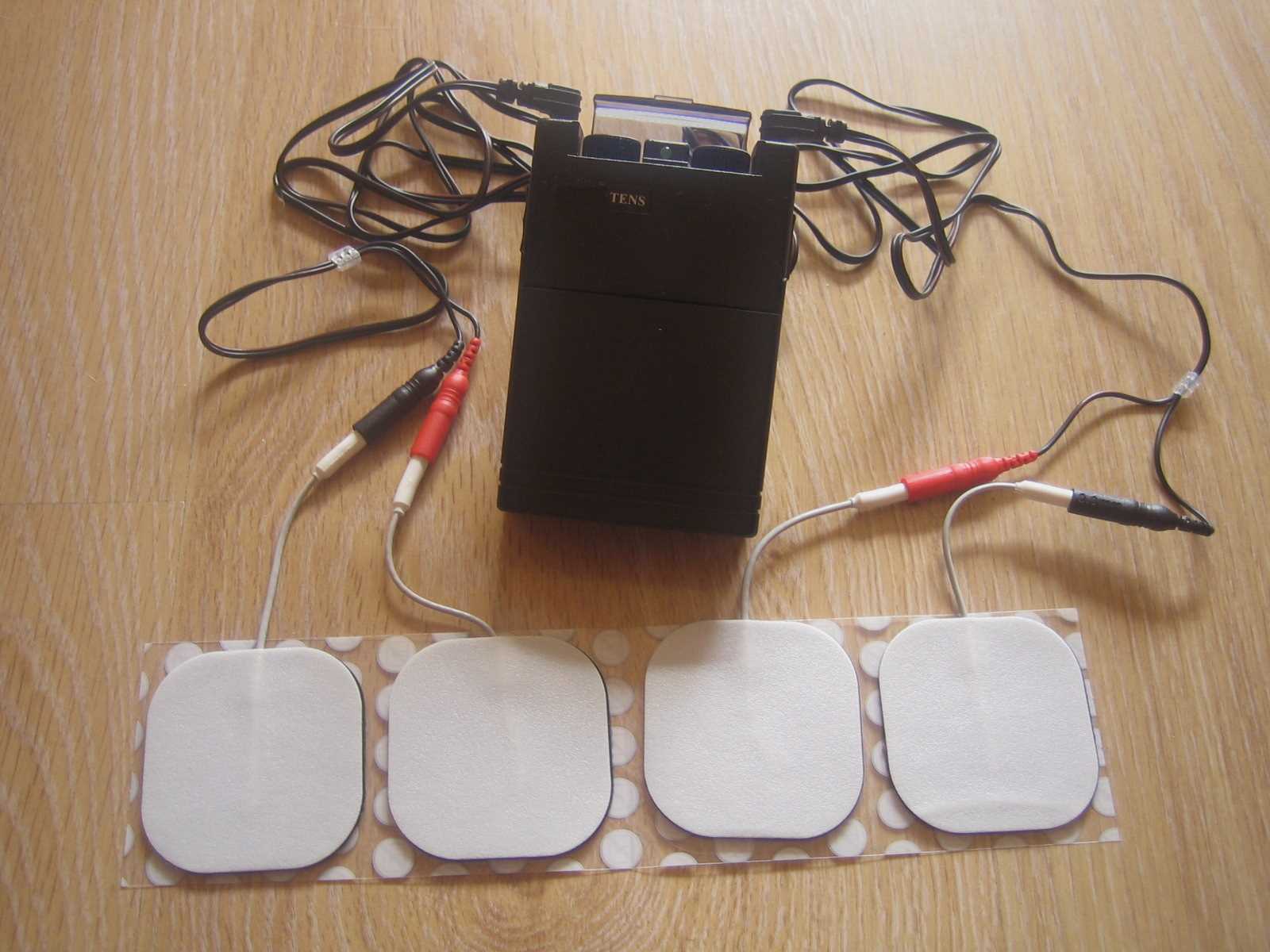