Polydactyly or supernumerary digit is a common malformation. It involves mostly the upper limbs. Classifications have been established to ease its management. This activity reviews the evaluation and treatment of supernumerary digits and highlights the role of the interprofessional team in the care of patients with this condition.

Supernumerary digit, or polydactyly, is an autosomal dominant congenital defect of the upper and/or lower extremity that is typically discovered immediately after birth.[1] Polydactyly is characterized by a person having fingers or toes numbering greater than 5. It is the most common congenital hand anomaly.[2] Parey, who lived in the 16th century, initially described polydactyly as “superfluous fingers” when describing persons with greater than five fingers.[3] In addition to Parey’s historical description, artwork in the southwest “Four Corners” region of the United States depicts persons with hands and feet with six digits. It is believed this artwork comes from an early population living in the area around 600 to 1280 AD.[4]

Polydactyly is primarily thought to be a failure in digit control during development.[5] Typical limb development occurs between 4-8 weeks of gestational age. Multiple signal centers exist that guide limb and digit development. The most prominently involved signaling molecule with polydactyly is Sonic Hedgehog (SHH), working from the zone of polarizing activity (ZPA). The ZPA is responsible for anterior-posterior (radial-ulnar) axis development.[6]

SHH is vital to digit number and type development.[5] In normal hand development, limb length is determined by fibroblast growth factor signals from the apical ectodermal ridge. The development of digits occurs in a radial-ulnar axis and is regulated by members of the bone morphogenetic proteins (BMP) family and SHH.[7] SHH is in higher concentrations ulnarly than radially, which aids in digit differentiation.[8] Mutations in the LMBR1 gene have also been implicated in the development of polydactyly due to upregulated SHH expression in the developing limb.[9]

Glioma-associated oncogene homolog 3 (Gli3) is an SHH antagonist, which has been shown in a group of people with Greig cephalopolysyndactyly to have a missense mutation in Gli3. This missense mutation can lead to an upregulation of SHH, which can contribute to polydactyly due to disrupted definition of the radial-ulnar axis.[6][10]

During limb development in an embryo, the typical pattern of digit development is controlled by the interactions of multiple signaling molecules. When one or more of these signaling molecules has upregulation or downregulation, supernumerary digits can occur on one or both hands and/or feet. This up or down-regulation typically occurs due to genetic errors in a number of possible chromosomal regions. Most commonly, polydactyly of the hand occurs, involving the ulnar side of the hand more than the radial side.[1]

As a congenital disorder, polydactyly may be commonly seen in familial patterns, so it is important to obtain a good family history. Patients presenting with polydactyly will have an extra finger and/or toe, and this is most often discovered in the immediate post-natal period of life for a neonate.

Physical exam findings include the observation of a supernumerary digit. Imaging, including radiographs, is useful for possible surgical planning and to further classify the specific pattern of polydactyly.

The Wassel classification is used for preaxial (radial) polydactyly of the hand. There are seven classes of polydactyly in this system. Type I involves a bifid distal phalanx. In type II the distal phalanx is duplicated. Type 3 is characterized by bifid proximal phalanges. The most common is type IV, with duplicated proximal phalanx. With type V, a bifid metacarpal exists. Duplicated metacarpals are the finding in type VI. Type VII consists of triphalangia.[13] (Figure 1)

Polydactyly can be detected on anatomic ultrasounds done prenatally. However, it is typically diagnosed at birth. To properly treat polydactyly, the provider must fully understand the exact type of polydactyly involved. This must include a thorough understanding of the musculoskeletal components involved. Part of the evaluation must include radiographs and physical examination to assess stability, motor function, and cosmesis.[15][16]

Practitioners must also consider and evaluate if polydactyly is presenting as part of a syndrome. Syndromes that are reported with a higher incidence include Holt-Oram syndrome and Fanconi anemia.[12]

Treatment aims to improve hand function and cosmesis.[12] Once a diagnosis is made, surgical management can be undertaken when needed. The decision of surgical treatment versus non-operative management is primarily guided by the anticipated function of the supernumerary digit. Often if the digit has fully developed skeletal components and is anticipated not to interfere with hand function, nonoperative management is considered. Multiple surgical techniques exist to manage polydactyly of the hand. General principles that must be adhered to include preservation of viable skin flaps, preservation of ligamentous structures to maintain a stable finger, and surgical planning to maintain a strong pinch grip.[16]

Some authors recommend that preaxial polydactyly be surgically managed in patients between 7 and 12 months old.[17] A common consensus is an intervention for preaxial polydactyly at least by close to 12 months of age to optimize functional outcomes. Operative interventions can include digit ablation, the Bilhaut-Cloquet procedure, or an on-top plasty.[12] Surgical ablation is the most common choice. Typically with this procedure, the goal is to preserve the more dominant thumb, ablate the smaller, more hypoplastic thumb, and reconstruct the collateral ligaments as necessary.[12] The goal is to create a stable and functional thumb and minimize the need for future repeat procedures. Simple suture ligation has numerous potential complications, which are discussed below and are not favored for the management of preaxial polydactyly.[16]

The Bilhaut-Cloquet procedure involves zig-zag incisions on the volar and dorsal surfaces of the bifid thumb portions. Then a resection of the central portions of the two thumbs via osteotomy is performed. The remaining osseous structures are encircled with K wires allowing the healing of the bone and soft tissues. This technique allows the creation of a typically more normal-sized and functional thumb. The On-top plasty is reserved for triphalangeal thumbs. In this procedure, the most functional distal thumb portion is transferred to the most suitable metacarpal of the thumbs available.[12]

Postaxial polydactyly is usually managed with surgical excision or suture ligation when no bony structures exist. If bony structures are present, surgical management with similar goals to preaxial polydactyly is important. The creation of a structurally sound and functional digit is key to good outcomes. Typically the more ulnar and less developed digit is removed. When partial duplication exists, it is important to transfer tendinous and ligamentous structures to the remaining digit for good function.[12]

Central polydactyly is often treated between 6-12 months of age. Again, the focus is on aesthetics and function. Surgical options most often used include excision or ligation of the more rudimentary digits. One guiding principle advocated by small studies of surgical outcomes for central polydactyly is to create an opposable thumb and 3 functional digits over creating a 5 fingered hand.[18][19]

Treatment of polydactyly of the foot again focuses on function and cosmetic outcome. Guiding principles for surgical treatment include recreating a normal foot contour, maintaining physeal alignment, and keeping proper soft tissue tension around the joints of the toes.[15]

Typically the diagnosis of polydactyly is readily apparent when the extra digit includes bony and soft tissue features. However, when a more rudimentary digit exists with possibly only soft tissue, a differential must include acquired digital fibrokeratoma.[20]

Polydactyly has aesthetic and functional implications. The primary concerns with polydactyly center around its impact upon fine motor development and function. With appropriate and well-timed intervention, the vast majority of cases of polydactyly have good functional outcomes, and the overall prognosis is favorable.

It is important to have early conversations with the parents of a patient with polydactyly. As early intervention can lead to more optimal outcomes, parents should be educated about the etiology, outcomes, and potential complications of polydactyly and its management. Parents need to understand that while surgical complications are generally uncommon, painful scarring, growth disturbances, and neuroma formation can occur.[14][16]

The clinical workup, management, and follow-up of patients with supernumerary digits require an interprofessional team approach. Typically the diagnosis is made early in life by a primary clinician. Prompt referral to an orthopedic specialist can allow for early intervention when necessary. If surgical intervention is pursued, one of many specialists may be involved, including orthopedic surgeons, plastic surgeons, and anesthesiologists. All medical professionals involved should be aware that polydactyly may present as part of a syndrome, and referral to a genetic specialist may be necessary. In addition, other team members can include occupational therapists and physical therapists for strengthening and development of motor skills. As in all areas of interprofessional management, communication between team members is important to optimize outcomes for patients. 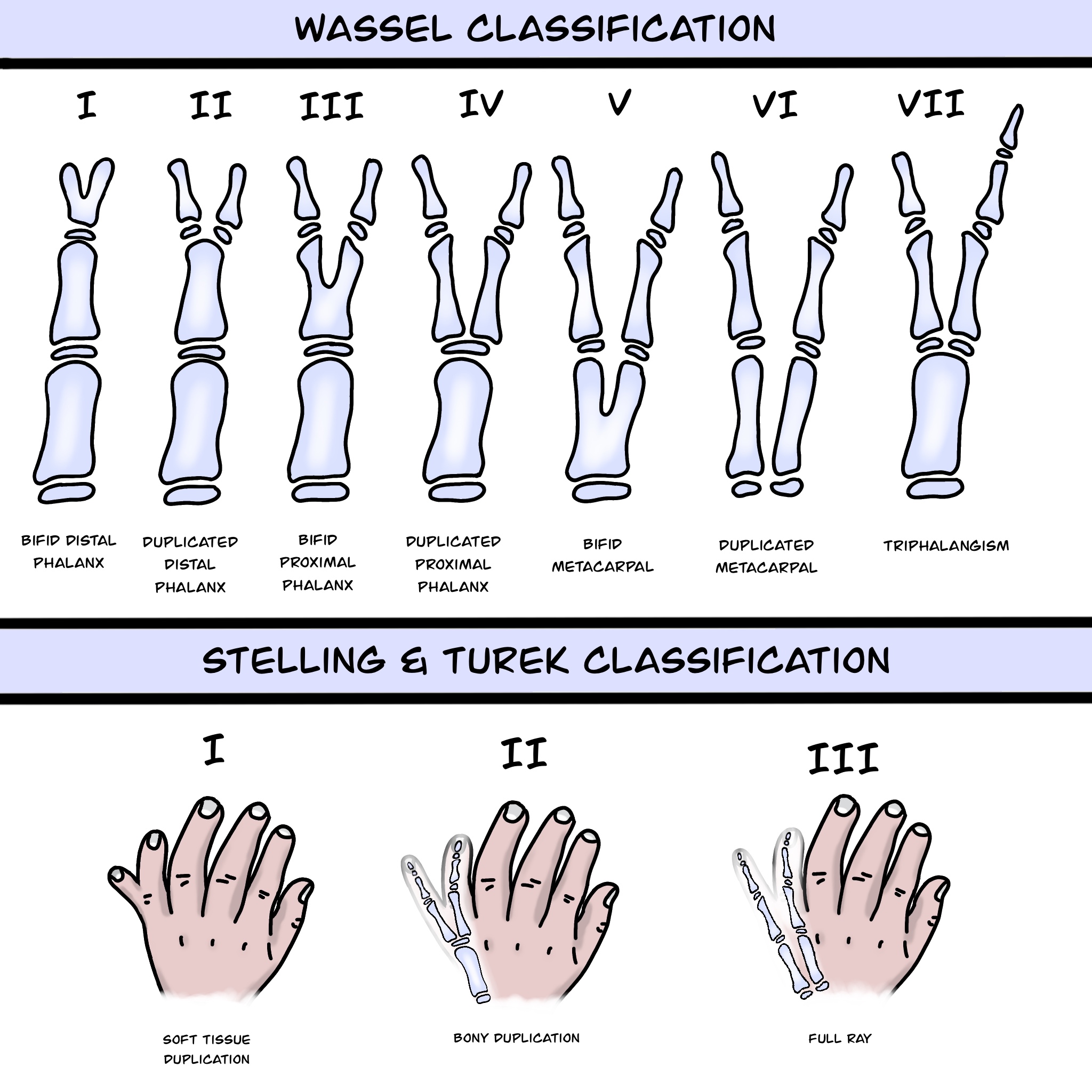 Gallant GG,Bora FW Jr, Congenital Deformities of the Upper Extremity. The Journal of the American Academy of Orthopaedic Surgeons. 1996 May;     [PubMed PMID: 10795051]