The peritoneum covers the upper third of the rectum anteriorly and laterally, but the middle third is only covered anteriorly. The lower third is not covered by the peritoneum but starting at this level, the fascia propria envelops this segment of the rectum. This fascia is more pronounced laterally, forming the lateral rectal stalks. The rectum is attached posteriorly to the presacral fascia at the level of S4 via the Waldeyer fascia.[2]

The rectum functions primarily as a temporary reservoir for feces storage. It also plays an integral role in controlling defecation as well as maintaining continence.[2][2]

The rectum derives from the hindgut, which also gives rise to the segment of the GI tract from the transverse colon down to the dentate line.[3]

The sensation of rectal distension is carried by the parasympathetic system to S2, S3, and S4.[6]

The rectum is supported by the pelvic floor muscles, which also aid in the process of defecation and continence. The levator ani muscles comprise much of the pelvic floor; these are the iliococcygeus, pubococcygeus, and puborectalis muscle.[7]

During surgical dissection, nerves are at risk of injury leading to sexual dysfunction in men with symptoms of erectile or ejaculatory dysfunction.[8]  There are several potential sites for nerve injury during rectum resection. The first potential site of injury is at the origin of the IMA. The purely sympathetic hypogastric plexus lies in this area; therefore, an injury could occur during ligation of the IMA pedicle causing retrograde ejaculation.

In the dissection of the posterior plane of the rectum, rectal dissection is outside the fascia propria. Nerves sit adjacent to this plane of dissection and are easily injured if the surgeon does not take the correct dissection plane. Injury at this location results in purely sympathetic damage as the parasympathetic fibers have not yet joined.[8]

The anatomical position of the rectum is vital in the digital rectal exam in men. The prostate sits anterior to the wall of the rectum, which allows for manual palpation to assess for nodules, shape, and size of the prostate in carcinoma screening. In women, the cervix, uterus, and vagina sit anteriorly to the rectum, and a digital rectal exam is often in conjunction with the manual pelvic exam. Posterior vaginal wall weakening could result in a rectocele where the rectum herniates into the vagina.[9][10][9] 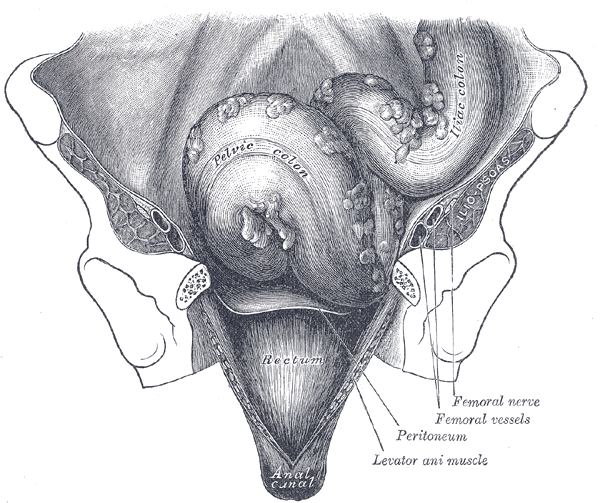 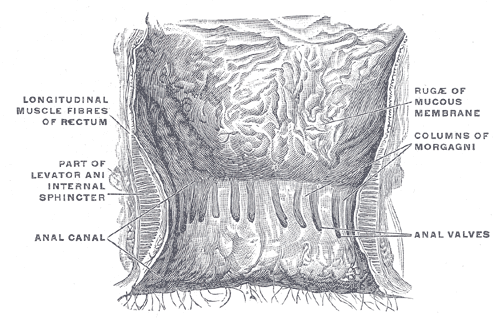 Davies MR, Anatomy of the nerve supply of the rectum, bladder, and internal genitalia in anorectal dysgenesis in the male. Journal of pediatric surgery. 1997 Apr;     [PubMed PMID: 9126749]