The risk factors for subclavian artery thrombosis are the same as thrombosis in any other site of the body.  The main risk factors are obesity, hypertension, diabetes mellitus, smoking, and metabolic syndrome.  Similar to other artery thromboses, subclavian artery thrombosis also involves an area subjected to increased shear stress leading to endothelial injury and subsequent platelet aggregation and release of platelet-derived growth factor. This sequence triggers the proliferation of smooth muscle cells in the arterial intima and forms the locus of the atherosclerotic plaque.

One of the rare complications of subclavian stenosis develops in a patient who has had coronary artery bypass surgery with the internal mammary artery (IMA) graft is angina pectoris. The internal mammary artery arises from the subclavian artery and can be affected by stenosis. If there is subclavian artery thrombosis proximal to the IMA graft, flow impairment to the IMA may occur. In instances of severe stenosis, retrograde flow from the grafted coronary artery to the brachial artery may lead to angina; a phenomenon called coronary steal syndrome.

Physical examination particularly cardiovascular examination may reveal unequal blood pressure in arms, absent or diminished pulses (axillary, brachial and radial/ulnar) compared to the contralateral arm, and cervical or supraclavicular bruits. Ischemic findings such as gangrenous skin changes of the fingers or splinter hemorrhages of the nail bed may also present. The examination should also focus on the cerebral circulation including palpation of carotid pulses and auscultation for vertebral (suboccipital region) and carotid bruits.

The inter-arm systolic blood pressure difference of less than 10mm Hg has a negative predictive value of 99%.[5]

The recommendations for screening include when a patient is undergoing coronary artery revascularization using the intermammary artery such as CABG, and the suspicion of subclavian stenosis is high, or if a patient has a history of peripheral artery disease or systolic blood pressure differences in their upper limbs of over 10 mm Hg.[12]

Indications for the treatment are as follows;

Medical therapy includes antiplatelet including aspirin or clopidogrel, HMG-CoA reductase inhibitors, and either angiotensin-converting enzyme (ACE) inhibitors or angiotensin receptor blockers. The patient counseled against smoking, and if diabetes is present, strict glycemic control is advisable with the target HbA1c of less than 7.[4]

The axillary–axillary bypass surgery has a good prognosis in terms of morbidity and mortality.[14]

Endovascular intervention is the best modality currently for relieving subclavian artery thrombosis including percutaneous transluminal angioplasty with stenting or ballooning.[15]

The prognosis is good with early intervention, before the development of complications.

The complications of subclavian artery thrombosis are the following:

Procedural complications are as follows:

Smoking cessation is paramount in cases of atherosclerosis. The patient should receive counsel and education regarding the dangerous consequences of continued smoking which can literally threaten both life and limb due to the progression of atherosclerosis to other vasculature of the body.

Subclavian artery thrombosis is a rare presentation, but when it occurs, it is often symptomatic. The condition is best managed by an interprofessional team that includes a cardiologist, radiologist, vascular surgeon, and an interventionalist. It is essential to treat the condition causing the subclavian artery thrombosis, and this will also include reducing risk factors like smoking, hypertension, hyperlipidemia, and diabetes. 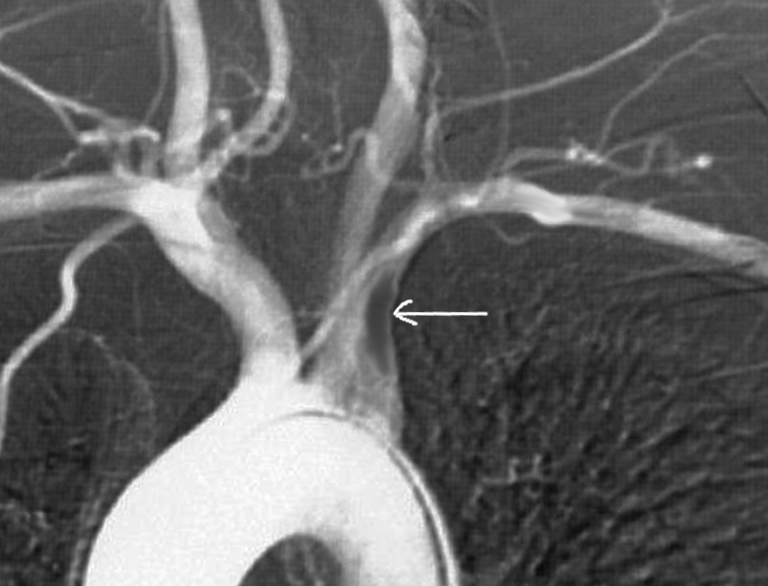