The greater splanchnic nerve transverses the diaphragm via aortic hiatus and terminates in the superior preaortic ganglia, which is commonly called the celiac ganglia. The postsynaptic fibers then move toward to organs of the foregut as the celiac plexus.[4]

The greater splanchnic nerve provides an inhibitory effect on the foregut, which causes inhibition of motility and secretions of the duodenum, stomach and distal esophagus, stimulation of gluconeogenesis, glycogenolysis and glucose release, inhibition of bile emptying and contraction of smooth muscle in the gallbladder, inhibits the secretion of pancreatic enzymes, stimulates glucagon release leading to inhibition of insulin release, secretion of catecholamines through stimulation of chromaffin cells, and lastly, innervates the spleens capsule to allow for transmission of splenic pain.[4]

The lumbar splanchnic nerve also consists of two nerves on each side of the body that form from branches of the L1 and L2 sympathetic chain.[7][5] These nerves transverse down the body until reaching the aortic plexus where they then join and synapse in that ganglia and develop into postganglionic fibers to be sent to vessels in this region as well as smooth muscle and glands. Indirectly these splanchnic nerves are connected to the superior hypogastric plexus as the aortic plexus connects to it.[7]

The postganglionic sympathetic fibers vasoconstrict blood vessels, allow for secretions from sweat glands, and provide motor to arrector pili muscle. The fibers that reach skeletal muscle by following the motor nerves are vasodilators. Lastly, the fibers that reach the viscera regulate glandular secretions, allow for general vasoconstriction, and inhibit smooth muscle contraction of the gastrointestinal system.[7]

The neural crest cells migrate along each side of the spinal cord in the thoracic region during the fifth week of embryonic development, forming paired cell masses called ganglia, dorsolateral to the aorta. All these segmentally organized sympathetic ganglia are bound by longitudinal nerve fibers called sympathetic trunks on each side of the vertebral bodies in a bilateral chain. Many neural crest cells displace ventrally to the aorta to form neurons in the preaortic ganglia, like the celiac and mesenteric ganglia. Other neural crest cells make up terminal ganglia in sympathetic organ plexuses near or within the organs by migrating to the heart lungs, and gastrointestinal tract regions. At the development of sympathetic trunks, sympathetic axons from the lateral horn of the spinal cord (thoracolumbar segments) migrate through the ventral root of a spinal nerve, and a white ramus communicans to a paravertebral ganglion. Here they can synapse with neurons, or they may ascend or descend to synapse at other points in the sympathetic trunk. Other presynaptic fibers move without synapsing through the paravertebral ganglia, creating the viscera's splanchnic nerves to the viscera.

The greater splanchnic nerve occurs bilaterally and carries both afferent and efferent fibers.[4] Its efferent fibers originate in the thoracic spinal cords lateral grey horn and have fibers that originate from level T5-9.[4] The afferent pathway of the greater splanchnic nerve uses the white communicating rami, ventral rami, and spinal nerves to relay sensory information into the spinothalamic tract, which then ends in the cerebrum.[4]

The greater splanchnic nerve helps with the motility of the foregut and provides sympathetic innervation to the adrenal medulla. Specifically, it supplies the alimentary canal, liver, gallbladder, pancreas, adrenal medulla, and the spleen.[4] The thoracic splanchnic nerves all play a role in pain management in cases of chronic pancreatitis and pancreatic cancer due to the places that they innervate.

The lumbar splanchnic nerve supplies sympathetic innervation to the glands and smooth muscles of the hindgut and pelvic viscera. The large intestine and the kidneys are the main targets of this nerve, with the pelvic plexus getting contributions when the nerve terminates in the inferior mesenteric and hypogastric ganglia.[7]

The sacral splanchnic nerve provides both motor and sensory innervation to the posterior thigh, part of the pelvis, and the majority of the lower leg and foot.

The pelvic splanchnic nerves provide parasympathetic innervation to the pelvic viscera and then joins with the inferior hypogastric vessels and provide branches that provide innervation to the fundus of the bladder, ductus deferens, and spermatic cord, all of which are supplied explicitly by the vesicle plexus, the forepart of the pelvic plexus. It also branches into the prostatic plexus, which supplies the prostate, corpora cavernosa of the penis and the urethra. This branch later goes on to supply the fibrous covering of the penis. In females, the pelvic splanchnic nerve provides branches to supply the walls of the vagina, clitoris, and the erectile tissue of the vestibule.[9]

If an individual were to look in a medical textbook, they would find that most physicians refer to the greater splanchnic nerve having roots T4-T9, there are commonly other roots that tend to join the nerve throughout its course.[4] The root has been seen to go as low as T11 in some patients.[4]  In some specific cases, it has shown evidently in patients that the root does not always seem to be continuous. Because of this, it can skip spinal levels. These skipped spinal levels can differ between different individuals.[4]

Subdiaphragmatic neuroadaptive surgical procedures are used to reduce chronic abdominal pain. A proper understanding of the anatomical position and location of the thoracic splanchnic nerves is critical for success during this procedure.[11]

For patients who are undergoing surgical treatment for cancer of cervical uteri, a standard iatrogenic error is that during this procedure, the pelvic splanchnic nerves become damaged.[12] They often get spliced during the resection. So, the suggestion is that when patients are undergoing surgical treatment for this condition, surgeons perform an intraoperative electrical stimulation of the roots of the pelvic splanchnic nerves to ensure they are intact and functioning properly.[13] If they are not working properly or become damaged during the procedure, then the patient could experience loss of bowel control, constipation, abdominal and pelvic pain, and other symptoms.[13]

The splanchnic nerve divides into multiple different sections. These divisions are useful during treatments and surgical procedures for various aspects. The greater thoracic splanchnic nerves can be a target when trying to treat chronic upper abdominal pain.[4] During surgery, it has shown evidence that when patients are suffering from pancreatic cancer or pancreatitis, the greater thoracic splanchnic nerves can be targeted to manage pain.[4] The procedure is a splanchnicectomy. The procedure is directly meant to control the chronic intractable visceral pain felt by a patient, which can be brought on for several reasons.[5]

In patients who suffer from right-sided flank pain, it is common to see transection of the right greater thoracic splanchnic nerves, to get the pain under control and manage it.[4] It is still a controversial discussion as to whether or not unilateral transection of splanchnic nerves is as effective as transecting them bilaterally. Due to this controversy, many physicians will manage flank pain or other forms of chronic pain, such as the ones stated above, through either a bilateral or unilateral approach, both of which show promise in treating chronic types of pain and pain management. 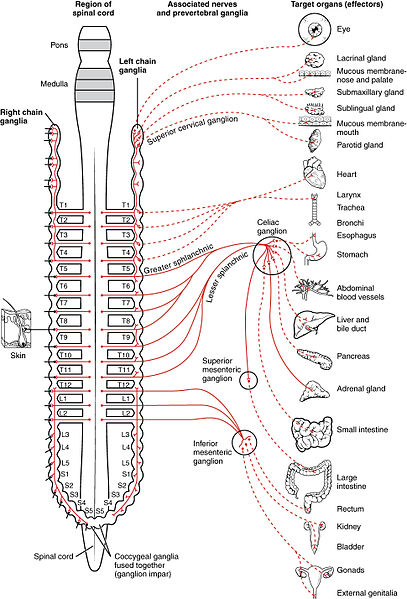