Renal cell carcinomas (RCCs), which originate within the renal cortex, are responsible for 80% to 85% of all primary renal neoplasms. Transitional cell carcinomas, which originate in the renal pelvis, comprise approximately 8%. Other parenchymal epithelial tumors, such as oncocytomas, collecting duct tumors, angiomyolipomas, and renal sarcomas, occur infrequently. This activity reviews the causes, pathophysiology, presentation and diagnosis of renal cell cancers and highlights the role of the interprofessional team in the management of these patients.

Renal cell carcinomas (RCCs), which originate within the renal cortex, are responsible for 80% to 85% of all primary renal neoplasms. Transitional cell carcinomas, which originate in the renal pelvis, comprise approximately 8%. Other parenchymal epithelial tumors, such as oncocytomas, collecting duct tumors, angiomyolipomas, and renal sarcomas, occur infrequently. In children, nephroblastoma and Wilms tumor are common. Medullary renal carcinoma is a rare but aggressive form of renal cell cancer that seen in sickle cell disease. Other less common subtypes are clear cell, papillary, and chromophobe malignancies.[1][2][3]

Many studies have suggested that workplace exposure to certain substances increases the risk of RCC. Some of these substances are cadmium, herbicides, asbestos, and trichloroethylene.

RCC is the most common type of kidney cancer in adults. It occurs most often in men ages 50 to 70.

Globally, the incidence of RCC varies, with the highest rates observed in the Czech Republic and North America. In the United States, there are approximately 63,000 new cases and almost 14,000 deaths each year.

In the United States, incidence rates of RCC have been on the rise through the mid-2000s. Most of the increases since the 1980s occurred in early-stage tumors.[6]

The proximal renal tubular epithelium is the kidney tissue from which RCC arises. The two forms are sporadic: nonhereditary and hereditary. The structural alterations of both forms occur on the short arm of chromosome 3 (3p).

Families at high risk for developing renal cancer were studied, which led to the cloning of genes. The genes whose alteration resulted in RCC formation were tumor suppressors (VHL, TSC) or oncogenes (MET).

Subtypes of renal cell cancer include:

In the early stages, when the mass is small (less than 3 centimeters), renal cell cancer is typically asymptomatic. Approximately 25% of patients are asymptomatic, and the solid renal mass is an incidental finding during a routine radiological study.

The classic clinical triad of flank pain, hematuria, and flank mass is not common, presenting in only 10% of patients. When this classic triad is present, it usually indicates advanced disease.

A urine test may show hematuria. Urine analysis may detect cancer cells in the urine. A blood test may show anemia or high serum calcium levels.[7][8]

If RCC is suspected, renal and bladder ultrasound is usually the first radiographic test. If the renal ultrasound shows a solid mass or a complex cyst with septations or nodules, the next test should be a dedicated CT scan of the kidneys, ureters, and bladder before and after IV contrast with delayed imaging of the entire abdomen and pelvis.

CT scan is used to stage RCC. CT scan will detect lymphadenopathy and invasion to the renal vein or inferior vena cava or invasion to adjacent organs. CT scan can detect metastatic disease to the bones of the abdomen and pelvis only. Whole body bone scan is the test of choice to detect bone metastases. Chest CT scan also should be obtained, as RCC presents with lung metastases in about 10% to 20%. The use of PET-CT is controversial but is helpful for distant metastases.

Abdominal MRI is just as good as CT scan for diagnosing and staging RCC but is more subject to limitations such as respiratory motion artifact because the images take longer to acquire.

Treatment depends on the stage of the tumor. See staging."

Other renal abnormalities that can mimic RCC include the following: a prominent column of Bertin, renal abscess, renal infarct, and complex renal cyst.

The finding of a prominent column of Bertin is typically a questionable ultrasound finding which requires cross-sectional imaging CT scan or MRI to confirm.

The finding of renal access typically has other clinical findings to support such as pyelonephritis, high white blood cell (WBC) count, fever, and chills.

The finding of renal infarct is usually associated with vascular abnormalities such as renal vein thrombosis or trauma related.

To differentiate a complex renal cyst from renal cell cancer, radiologists use the Bosniak classification.

Below is the Robson staging for RCC; although it has largely been replaced by the TNM staging which is much more complicated.

The prognosis depends on stage on histology of the cell type.

Renal cell cancer is relatively common in the US and often presents with nonspecific signs and symptoms. The malignancy is ideally managed with an interprofessional team that includes a urologist, nephrologist, oncologist, and a geneticist. Over the past two decades, the mortality rates from this malignancy have dropped because of earlier detection and treatment. five-year survival for stage 1 cancer is greater than 90% and 79% for stage 2 renal cancer. For those with lymph node involvement, the survival drops to less than 40% over five years. Factors associated with improved survival include obesity, good performance status, complete excision of the primary and a long disease-free interval from the time of surgery to the presence of metastases. Patients with a family history should be educated about the need for other members of the family to undergo screening. Patients at high risk for renal cell cancer should also be educated about the signs and symptoms; as earlier the cancer is managed, the better the prognosis.[11][12] (Level V) 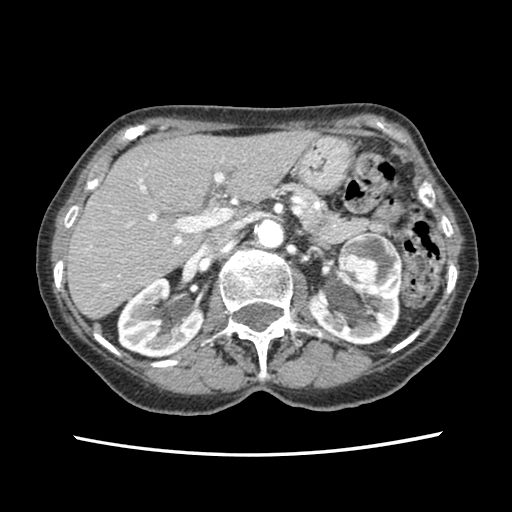 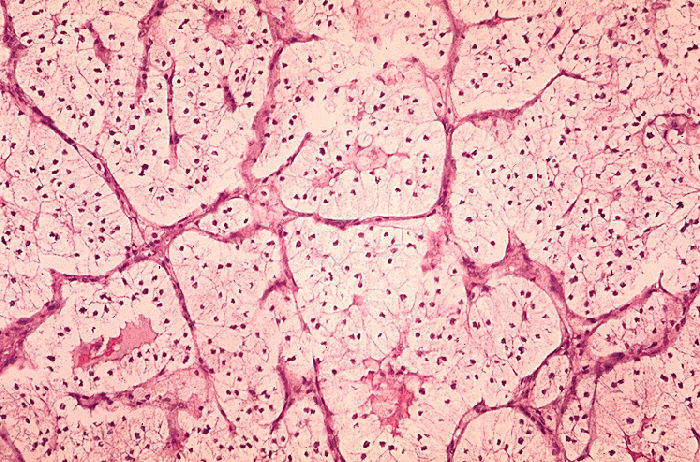 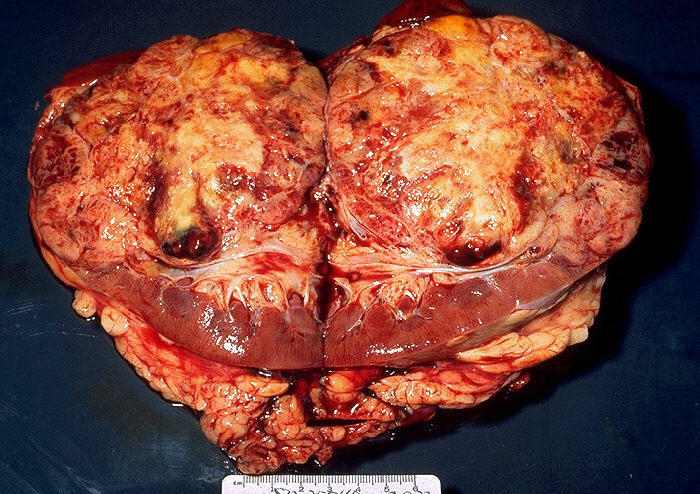 Jonasch E, Updates to the Management of Kidney Cancer. Journal of the National Comprehensive Cancer Network : JNCCN. 2018 May     [PubMed PMID: 29784745]