The larynx is a dynamic, flexible structure composed of a cartilaginous core with interconnecting membranes and associated musculature. The larynx is a midline structure positioned at the interface between the digestive and respiratory tracts. In addition to housing the vocal cords and producing phonation, the larynx assists with multiple other functions including but not limited to: airway protection, regulating intrathoracic pressures, and regulating intra-abdominal pressures. The anatomical position, composition, associated musculature and innervation of the larynx all contribute to this structure’s capabilities.[1][2][3]

The anatomical position of the larynx is also dynamic in nature and varies from birth to maturity. Initially, at birth and for the first couple years of life, the larynx is further superior in the neck than in adults. In infants, this high position results in direct contact between the soft palate and epiglottis. This allows inspired air to move from the nose to the trachea directly. It is because of this anatomical relationship; an infant is able to swallow liquids and breathe almost simultaneously.

By adulthood, the larynx descends inferiorly to its final position. The larynx is found within the visceral compartment of the neck and serves as the “floor” of the anterior triangle of the neck. The larynx is the superior portion of the respiratory tract and aligned on its long axis, is vertically adjacent to the trachea, which lies directly inferior to the larynx and is connected via the cricotracheal ligament. Anterosuperiorly, the larynx articulates with the hyoid bone via the thyrohyoid membrane. Dorsally, the larynx attaches to the muscular walls of the pharynx.

The laryngeal ventricle is the fossa or sinus that lies between the vocal and vestibular folds on either side. The vocal folds are commonly referred to as the vocal cords and the vestibular folds as the false vocal cords. The laryngeal ventricle also demarcates the separation between the quadrangular membrane superiorly, and the cricovocal membrane found inferiorly. These two membranes together cover the entire interior portion of the larynx from the epiglottic and arytenoid cartilages superiorly to the cricoid cartilage inferiorly. These membranes are bilateral.

The laryngeal ventricle begins inferiorly to the free edge of the vestibular fold and continues laterally. The ventricle exists bilaterally, and secretes mucus over the superior surface of the vocal folds, forming a protective layer.

The vocal folds, also known as the true vocal cords, are medial projections of the walls of the larynx that can approximate to each other in the midline to completely obstruct the lumen of the larynx. These vocal folds delineate the plane referred to as the glottis. Within these vocal folds is a muscle known as vocalis muscle which runs aside the vocal ligament. The ligament and lack of blood vessels on the surface of the folds result in the characteristic white appearance of the pair of vocal folds. This provides visual distinction compared to the pink appearing vestibular folds. The space found between the vocal folds is termed the rima glottides.

The laryngeal inlet/aditus is used to refer to the entrance of the cavity of the larynx. Superior to the inlet is the laryngopharynx.

The cavity of the larynx is divided into three regions:

The larynx is a complex structure of the respiratory tract composed of unpaired and paired cartilages and originates embryologically from both endoderm and mesoderm.

One thing to note is that the epiglottis and its cartilages are not derived from these same pharyngeal arches as the rest of the laryngeal structures. The epiglottis does not appear to have origination from a pharyngeal arch as it develops later in mammals.

Recurrent laryngeal nerve [RLN]: the RLN is also a branch of the vagus nerve. The left RLN is found inferior to the aortic arch and posterior to ligamentum arteriosum. The right vagus continues posteriorly to the root of the right lung giving off the right RLN which loops around the right subclavian artery.

The recurrent laryngeal nerves then continue superiorly bilaterally and pass posterior to the lobe of the thyroid gland as they travel along the lateral surfaces of the trachea and esophagus in the tracheoesophageal groove. The nerves pass posterior to the cricothyroid joint as they enter the larynx at this level through fibers of the inferior constrictor muscles of the pharynx. At this point, the RLN becomes the inferior laryngeal nerve.

Extrinsic Muscles: These muscles are found in bilateral pairs and aid in the movement of the larynx at a gross level. Innervations of the extrinsic laryngeal muscles vary and include the following nerves:  ansa cervicalis, trigeminal nerve, facial nerve, glossopharyngeal nerve, and hypoglossal nerve. The pharyngeal constrictors and palatopharyngeus receive innervation from the  glossopharyngeal, vagus, and spinal accessory nerve via the “pharyngeal plexus."

Extrinsic muscles that attach directly to the larynx:

Extrinsic muscles that do not attach directly to the larynx: may alter the position of hyoid or may attach to the walls of the pharynx.

There are gender-related differences that lead to different laryngeal dimensions in males and females. This differences also exist in the angles of the larynx including the thyroid angles (male 95, female 115 degrees). Even with this variation, the larynx shows symmetry when comparing one side to the other. The angles increase when there is a decrease in diameters and dimensions cranial to caudal.

“Broyle’s tendon” is the connective tissue between the thyroid skeleton and the noduli elastici anterior. This also shows a gender-related difference with males averaging 2.9 mm and females 1.8 mm in length. Other absolute differences exist between male and female populations, but the relative dimensions are not significant. The differences can be attributed to the anterior-posterior growing nature of the larynx during puberty. This growth is primarily in the sagittal plane. It is also noted that the thyroid cartilage is noted to be thicker in males as compared to females.

Variation may also exist the in the branching of the recurrent laryngeal nerve itself. The recurrent laryngeal nerve has been documented to divide into two or more branches prior the entering the larynx via the inferior constrictor muscle in about 40% of RLNs. The anterior branch has been documented to pass either anteriorly or posteriorly to the cricothyroid joint and prior to innervating all intrinsic laryngeal muscles excluding the cricothyroid muscle. The posterior branch typically supplies the arytenoid muscles and posterior cricoarytenoid muscle.

The location of the bifurcation or trifurcation has been documented to range between 0.6 to 4.0 cm from the inferior border of the cricoid cartilages. Although extralaryngeal branching typically occurs above the level of the inferior thyroid artery, it can occur at any point.

The course of the recurrent laryngeal nerve may also differ as a consequence of anatomic distortion by masses or inflammation or because of a vascular anomaly. With an incidence of 0.6%, the recurrent laryngeal nerve may pass directly from the vagus nerve to the larynx in the neck in cases with an atypical right subclavian artery that arises after the left subclavian artery from the aortic arch. This has been referred to as a “nonrecurrent” inferior laryngeal nerve. This occurrence is even less likely with regards to the left side and has only been a document to occur a handful of times.

As the recurrent laryngeal nerve ascends, it does so within the tracheoesophageal groove. This, however, can vary. It is documented to fall into this groove more often on the left side [77%] as compared to the right side [65%]. Subsequently, the recurrent laryngeal nerve is found to ascend lateral to the trachea more often on the right side [33%] than the left [22%]. In rare circumstances, it ascends anterolateral to the trachea, and as a result, is more exposed and at risk of surgical injury.

In addition to difficulties with phonation and pitch, laryngeal weakness creates the risk for aspiration. 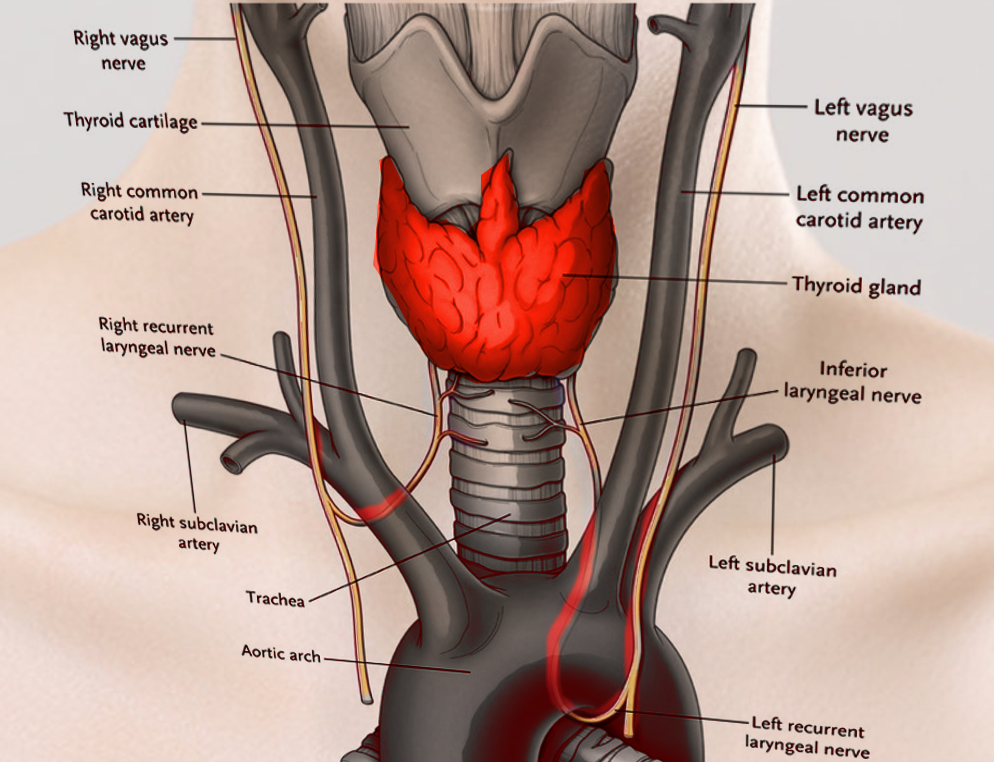