The rectus sheath is the durable, resilient, fibrous compartment that contains both the rectus abdominis muscle and the pyramidalis muscle. The fascial coverings of the external oblique, internal oblique, and transversus abdominis muscles comprise the rectus sheath. The layers of decussating and interweaving fascial aponeuroses vary according to their position within the superior two-thirds of the sheath and the inferior third. Because of this variation and the clinical implications, it is crucial to understand the anterior and posterior laminae. The rectus sheath contains within it the superior and inferior epigastric arteries and veins, lymphatic vessels, and the thoracoabdominal nerves related to those particular structures.

The rectus sheath extends from the inferior costal margin and the costal cartilages of ribs 5 to 7 to the pubic crest. The composition of the anterior and posterior rectus sheath will differ according to its position superior or inferior to the arcuate line. The arcuate line is an area of demarcation visible from the peritoneal surface of the abdominal wall, residing one-third the distance between the umbilicus and the pubis. The arcuate line can be a sharp demarcation, or it can be a gradual transition zone where the fibers of the posterior sheath gradually disappear.[1]

The muscles that comprise the abdominal wall derive from mesoderm, specifically in thoracic myotomes within the somites. The thoracic myotomes divide into dorsal epaxial and ventral hypaxial divisions during the sixth week of gestation.[3] The abdominal wall forms from the ventral hypaxial divisions of the myotomes. The rectus abdominis muscle develops separately from the lateral abdominal wall musculature. The developing muscle forms myotubes, which are elongated, multinucleated collections of myoblasts. Myofilaments then form in the cytoplasm of the myotubes, followed by myofibrils and other structures which characterize striated muscle cells. As the muscles of the abdominal wall undergo further development, they become invested in epimysium, perimysium, and endomysium. The epimysium and perimysium originate from fibroblasts, while the endomysium forms from reticular fibers and the external lamina of the muscle itself, so it is derived from muscle fibers. These layers make up what is known as the rectus sheath.

Understanding the composition of the rectus sheath is of great significance for surgeons. The arcuate line can be a potential point for entry into the preperitoneal space for a total extraperitoneal laparoscopic inguinal hernia repair. For this type of repair, dissection is started at the umbilicus and continued inferiorly along the anterior surface of the posterior rectus sheath until entering the preperitoneal space at the arcuate line. This space is developed, and the repair is subsequently completed within this created space.

The rectus abdominis muscle also has utility in many muscle flap repairs, so knowledge of the vascular supply of the muscle and its innervation are essential considerations in plastic surgery.[5]

The change in the decussation of the fascial fibers at the arcuate line creates a weakness in the abdominal wall at the juncture of the arcuate line and the lateral rectus sheath. Herniation through this area is called a Spigelian hernia.[1] These types of hernias can be intraparietal, meaning that they involve only one or two of the three layers of fascia. The bowel may protrude partially through the abdominal wall but remain contained deep to the external layer(s) of the fascia. This presentation means that these hernias may exhibit less characteristic exam findings than other ventral hernias, and they can be particularly challenging to detect on a physical exam. They still have the potential for incarceration and strangulation, so diagnosis and treatment are vital. Imaging studies with either a CT scan or ultrasound can aid in their diagnosis. The treatment of these hernias is surgical with either an open or laparoscopic approach.

The arcuate line is also significant in that hematomas within the rectus sheath can expand intra-abdominally with relative ease inferior to the arcuate line, since there is no strong posterior fascia. Rectus sheath hematomas are most commonly associated with therapeutic anticoagulation. CT scan or ultrasonography are viable diagnostic tools, with CT demonstrating greater accuracy than ultrasound. Management is typically non-operative with the cessation of anticoagulation, rest, ice, compression, and analgesia being effective in a majority of patients. If the patient is unstable, transfusion and/or angioembolization are indicated for treatment. Surgical management is generally contraindicated, especially in the setting of coagulopathy.[7][8][9][8][7]

The use of local anesthesia for postoperative pain control in abdominal operations is gaining favor in the surgical community. A rectus sheath block (RSB) involves placing a local anesthetic in the plane between the posterior sheath and the rectus abdominis muscle. This type of block works well for midline abdominal pain near the umbilicus. A transversus abdominis plane block (TAP) is also an option. In this method, a local anesthetic is placed in the neurovascular plane, more posteriorly on the nerves, in the posterior lumbar triangle. However, the TAP block affects a broader area than the rectus sheath block, thus making it a viable option for a greater range of surgical procedures.[10] 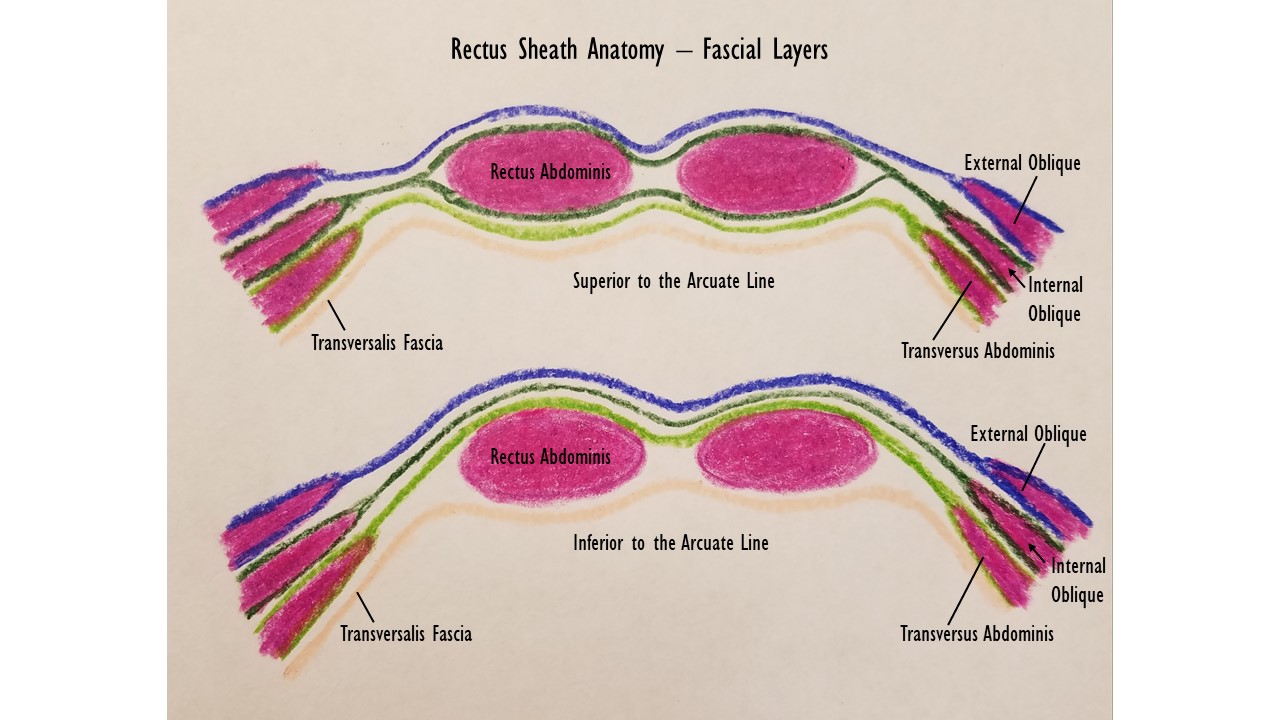 Rectus Sheath Anatomy, superior and inferior to the arcuate line
Contributed by Karlin Sevensma, DO, who drew the image