Secondary Raynaud phenomenon is associated with different etiologies. It is most commonly associated with connective tissue disorders such as scleroderma, systemic lupus erythematosus, Sjogren syndrome, and antiphospholipid syndrome. [4][5]

Drugs, such as antimigraine medications, interferon alpha and beta, cyclosporine, and nonselective beta blockers, can cause secondary Raynaud phenomenon.

Occupations that result in overt vibrational exposure from vibrating machinery mostly affect males. This is known as hand-arm vibration syndrome. Exposure to polyvinyl chloride, cold injury from work, or ammunition work are other occupational-associated causes of secondary Raynaud phenomenon.

Infections associated with secondary Raynaud phenomenon include parvovirus B19, cytomegalovirus, hepatitis B, and hepatitis C.

Raynaud phenomena occur more frequently in women (about 20% to 30%), particularly in younger age populations (teens to 20s). The female to male ratio is 9 to 1. [6]

With cold temperatures, the sympathetic nervous system causes the release of vasoconstricting neuropeptides and norepinephrine leading to vasoconstriction of arteriole smooth muscle and decreased blood flood to the skin. Of note, in secondary Raynaud phenomena, endothelin-1 is released by endothelial cells which causes vasoconstriction.

In secondary Raynaud phenomenon, the underlying disease is the factor that disrupts normal vessel reactivity to cold temperatures. Usually, the endothelial function of the digital and cutaneous vessels is compromised leading to eventual vasoconstriction with resulting tissue ischemia. For instance, fibrosis of the vascular system in systemic scleroderma leads to endothelial dysfunction followed by tissue ischemia.[7][8]

Raynaud phenomena typically affect fingers (distal areas). A Raynaud phenomenon attack is sudden with the development of cold digits and the demarcation of "white" areas also known as skin pallor or white attack. Instead of white attack, there may be cyanotic skin changes, otherwise known as a blue attack. The white or blue attack typically remains for approximately 20 minutes. After the Raynaud phenomenon flare, vascular reperfusion with subsequent rewarming occurs. This results in erythematous areas where the flare occurred. It is known as reactive hyperemia.

A Raynaud phenomenon attack starts out with a single digit and then spreads to other digits symmetrically on both hands. The thumb is typically spared. If the thumb is affected, this may be a sign of secondary Raynaud phenomenon. It may also result in cutaneous vasospasm affecting facial areas, ears, knees, or nipples.

Another skin finding seen during a Raynaud phenomenon attack is livedo reticularis. This results in purplish mottling or reticular pattern over the skin due to small blood vessel clots. This finding is reversible with rewarming but is irreversible with secondary causes, such as antiphospholipid syndrome, vasculitis, cold agglutinin disease, or peripheral vascular disease.

Nailfold capillary microscopy is utilized as a diagnostic method to differentiate primary Raynaud phenomena from secondary Raynaud phenomenon. It analyzes microvascular and morphologic changes in peripheral vessels seen with CTD, such as changes in architecture, capillary size, capillary density, the presence of hemorrhage, and avascular areas without capillary loops. This is done using a dermatoscope or ophthalmoscope. Nailfold videocapillaroscopy can also be used. Abnormal nail-fold microscopy is correlated with an increased likelihood of the development of CTD. The changes were seen are capillary loops appear enlarged or there is a loss of capillary loops. If there are mega-capillaries with a decreased capillary density, then these changes are indicative of scleroderma. [9][10][11]

Treatment of Raynaud phenomenon aims at decreasing the frequency and severity of the attacks with prevention of tissue ischemia. Treatment response is measured by the Raynaud Condition Score (RCS). This scoring system looks at the quality of life, frequency and severity of attacks, and the effect of Raynaud phenomenon on an individual.  [6][12][13]

If the patient fails to respond to only conservative therapy, then pharmacologic therapy with a vasodilating mechanism of action is used. Dihydropyridine calcium channel blockers (DHP CCBs) are the first-line pharmacologic treatment for Raynaud phenomenon. DHP CCBs include amlodipine and nifedipine. When starting CCBs, the medication is started at the lowest dose and gradually titrated every 4 weeks depending on the patient's response. Monitoring blood pressure response is important, particularly if the patient has baseline blood pressures that are low.

CCBs should be avoided in pregnancy unless digit ischemia is present.

If the patient fails to respond to DHP CCB therapy, a phosphodiesterase (PDE) inhibitor. It can be added to the current CCB therapy if partial treatment response is noted to the CCB. If there is no treatment response to the CCB, then the PDE inhibitor can be used as monotherapy. Sildenafil is started at a low dose, 20 mg daily, and then titrated depending on response over a period of 4 to 6 weeks with a maximum dose of 20 mg 3 times a day.

Alternative therapy to treatment failure using CCB and PDE inhibitor is topical nitrates, such as nitroglycerin, which is a direct vasodilator. Typically, 2% nitroglycerin ointment is used and applied to affected Raynaud phenomenon areas. Topical nitrates are absorbed systemically and may result in adverse systemic effects, such as hypotension, dizziness, and headache.

Other options, if the patient does not respond to the above therapies, include the following: losartan, fluoxetine, and prazosin.

If tissue ischemia is present in the digits and symptoms are severe, then intravenous infusion of prostaglandin is used. Different intravenous prostaglandins include iloprost, epoprostenol, treprostinil, and alprostadil. Prostaglandin functions as a strong vasodilator and also prevents platelet cell aggregation.

Bosentan blocks endothelin-1 vasoconstrictive effect. This is used in recurrent digit ulceration in CTD, such as systemic sclerosis. Surgery to remove the particular sympathetic nerves that cause vasoconstriction, also known as sympathectomy, can be used in severe, refractory cases.

In the setting of secondary Raynaud phenomenon and history of ischemic ulceration, low dose aspirin 81 mg should be used daily. If there is aspirin intolerance or contraindication, clopidogrel, or dipyridamole can be used instead.[14][15]

Severe Raynaud phenomenon may result in tissue ischemia, leading to necrosis followed by amputation of the affected area.

an interprofessional approach to Raynaud phenomenon

Raynaud phenomenon is best managed with an interprofessional team of healthcare professionals. The key to improving the morbidity is education. Besides the physician, the nurse and the pharmacist are in a prime position to educate the patient about the hazards of smoking. In addition, patients have to be told to insulate their hands and fingers from the cold. The pharmacists must make sure that the patient is on no medication that can cause vasoconstriction of the blood vessels. When ulcers develop the patient should be told to seek medical help as soon as possible to avert gangrene. A wound care nurse should be consulted on educating the patient on the care of the wounds and the type of dressings to use. A dietary consult is recommended as there is some evidence that a diet rich in omega 3-fatty acids may be beneficial in preventing Raynaud phenomenon. [16][17][18](Level V)

The prognosis for patients with primary Raynaud phenomenon in young people is good with little morbidity or mortality. However, if the patient does not change lifestyle or smokes, then ischemia may affect the distal tips of the fingers and lead to necrosis. There are reports that in the elderly population with Raynaud phenomenon, the risk of adverse cardiac events may be increased compared to the general population. For patients with secondary Raynaud phenomenon, the prognosis depends on the underlying disorder. In general, the quality of life for these patients is poor as they need to adopt a rigid lifestyle. Plus, many other secondary causes often have no cures and relapses are common.[2][19][20] [Level 5] 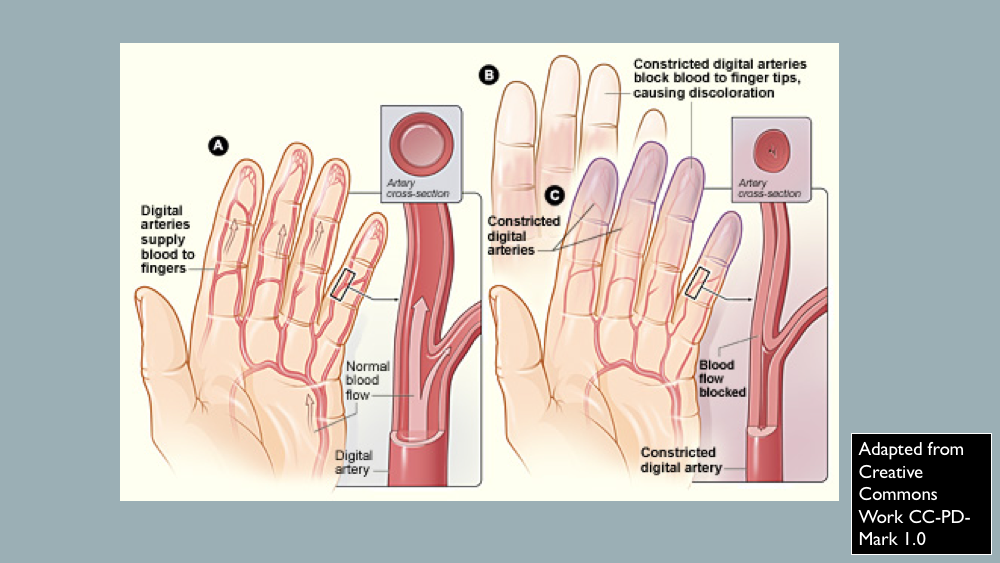 Curtiss P,Schwager Z,Cobos G,Lo Sicco K,Franks AG Jr, A systematic review and meta-analysis of the effects of topical nitrates in the treatment of primary and secondary Raynaud's phenomenon. Journal of the American Academy of Dermatology. 2018 Jun     [PubMed PMID: 29408338]