Pregnancy is the state of carrying a developing embryo or fetus. The human gestational period is 39 weeks and is divided into trimesters, the first spanning from week zero to week twelve.  During this time frame, numerous significant developmental milestones occur as the fetus develops. Additionally, as the fetus grows, it becomes visible via ultrasonography, and laboratory testing can be performed to track progression.

On initial presentation, pregnancy can be confirmed through beta-human chorionic gonadotropin (beta-HCG) testing of the urine and/or blood. This hormone is comprised of dissimilar alpha and beta subunits that are both required for biological activity.[1] Levels have a good correlation between the serum and urine but are dependent on urine specific gravity. Thus, it is ideal to obtain a first void (concentrated) urine specimen. Interestingly, it appears that whole blood used on a urine pregnancy test can be accurate.[2] Of note, the serum can also be tested for early pregnancy factor (EPF), a hormone that can be detected 48 hours after fertilization. This differs from beta-HCG, which is present after implantation, and, thus, EPF can be detected sooner.[3] Serum progesterone may also be tested, and its concentration increases linearly between weeks five and thirteen; an insignificant increase during this timeframe is associated with threatened miscarriages.[4]

While both testing types are highly sensitive and specific, the result from a single test should not be used as definitive evidence of pregnancy or lack thereof.[5] Urine testing is typically positive ten days after the missed period. False-negative urine results are seen with dilute urine, low beta-HCG levels (typically less than 25 mIU/mL), and less frequently due to the "hook effect" or "hook-like effect."[6][7] This phenomenon can be seen with high beta-HCG levels where either excess beta-HCG or its multiple fragments prevent "sandwiching" of the test's antibodies, which prevents activation of the reporter label. If a falsely negative urine HCG test is suspected, a quantitative serum level of beta-HCG should be obtained, considering that the most common cause of a false-negative urine test is low beta-HCG urine level.[6] Beta-HCG can be quantified by testing nine days after the luteinizing hormone peak.[5] False-positive urine results can be the result of fertility drugs containing beta-HCG, malignancies, and device error.[6]

It is important to note that an elevated beta-HCG level is not definitive of a normal or viable pregnancy. Conditions that result in elevated beta-HCG levels must be considered, including ectopic and heterotopic pregnancy; miscarriage; and the presence of abnormal germ cell, placental, and embryonal tissues. Evaluation of pregnancy may include serial beta-HCG titers, pelvic ultrasonography, and culdocentesis, although the latter has fallen out of favor due to poor test characteristics. Approximate doubling of beta-HCG hormone levels in 48 hours is reassuring of a viable pregnancy in the early first trimester.[5]

Consideration should be given to collecting swabs of vaginal fluid in patients reporting vaginal discharge, burning, and or pain. This is especially important in pregnancy as sexually transmitted infections can pose risks to the fetus and complicate pregnancy.[8][9]

Ultrasonography is a sophisticated imaging technology that utilizes high-frequency sound waves.[10] An image is produced based on the varying echogenicity of the object being targeted as well as the tissue between that object and the ultrasound probe.

In early pregnancy, ultrasound's main use is to determine the presence of an intrauterine pregnancy. Additionally, ultrasound can be used to evaluate for the presence of an ectopic pregnancy (cornual, tubal, adnexal, cervical, abdominal, cesarean section ectopic), free fluid in the pelvis, uterine and adnexal pathology, fetal cardiac activity and heart rate, miscarriage, or gestational trophoblastic disease.

Two anatomical approaches are used to visualize a pregnancy using ultrasound; transvaginal and transabdominal. A transvaginal ultrasound is performed using a high-frequency endocavitary probe placed into the vagina and visualizing the pelvic organs through the cervix. In contrast, a transabdominal ultrasound uses a lower frequency sound wave that can also be used to visualize pelvic organs but does so by looking through the abdominal wall with a curvilinear probe. The difference in frequency, along with the probe's anatomical placement during the exam, results in the transvaginal approach being superior for visualizing a very earlier pregnancy as well as evaluating the adnexa.

Deciding which modality of ultrasound to use is multifaceted; anatomy, age, weight, and beta-HCG levels should be considered. This may also be limited by the setting (clinic, hospital, emergency dept, radiology suite, etc.) and equipment available. It is reasonable to start with a transabdominal ultrasound, as this is less invasive. A full bladder is ideal for performing this study, as this provides an acoustic window. If the transabdominal approach is indeterminate, the transvaginal approach can be used given its superior imaging for the reasons discussed above.

It is paramount that privacy is offered to the patient when using either form of ultrasonography. A drape should be placed to cover any external anatomy that does not need to be exposed to provide comfort and privacy to the patient.

Indications for obtaining a pregnancy test, urine or serum, include a female of child-bearing age with any of the following symptoms: amenorrhea/dysmenorrhea, abdominal/pelvic pain, nausea, vomiting, vaginal discharge, urinary symptoms, dizziness/lightheadedness/syncope, hypotension, or tachycardia. These are a sample of indications, and there are many more clinical scenarios where this information would be useful. Pregnancy status is essential to consider before the administration of potentially teratogenic mediations.

Indications for an emergent or urgent ultrasound in early pregnancy include a positive pregnancy test with abdominal pain, pelvic pain, or vaginal bleeding, as these may be the result of complications. Additionally, it should also be utilized in hemodynamically unstable females of child-bearing age to evaluate for sonographic evidence of ruptured ectopic pregnancy.[11]

Also, ultrasound in the first trimester of pregnancy is routine for patients being followed by an obstetrician for dating and evaluation of viability.

In the emergency department, a positive pregnancy test should spark further evaluation, especially if the patient is reporting abdominal or pelvic pain and or vaginal bleeding.[12] Consideration must be given to the possibility of an ectopic pregnancy, a potentially life-threatening condition that occurs in approximately 2% of reported pregnancies.[13]

If the patient has an indeterminate ultrasound and the beta-HCG is less than the discriminatory zone, and the patient is hemodynamically stable without significant pain or vaginal bleeding, she should be directed to have a quantitative serum beta-HCG level repeated in 48 hours. If this repeat level is rising, ideally doubling every 48 hours, this is highly suggestive of a normal pregnancy. In contrast, if the beta-HCG level is declining or not doubling in 48 hours, miscarriage or failed pregnancy should be suspected.

Products of conception in a normal pregnancy should be identifiable via transvaginal ultrasound when the beta-HCG level is above 1,500 mIU/mL. Fetal heart tones can be appreciated between six and eight weeks of gestation. Between eight and ten weeks of gestation, important information about the pregnancy can be obtained by the provider, including placental location, fetal position and anatomy, amniotic fluid volume, and maternal anatomy, including dimensions of the cervix and uterus. It is noted that anatomic abnormalities diagnosed within the early first trimester are often by chance, while late first trimester diagnoses are typically made during the anatomic ultrasound scans.[17]

Ultrasound images that do not reveal an intrauterine pregnancy with beta-HCG levels either at or above the discriminatory zone should raise concern for abnormal pathology, including ectopic pregnancy, heterotopic pregnancy, and mass. Similarly, adnexal masses also warrant further investigation. Additionally, free fluid in the abdominal and or pelvis, especially in a hemodynamically unstable patient, should be taken seriously. A ruptured ectopic pregnancy must remain on the differential, and obstetrics should be contacted emergently.

Complications resulting from ultrasonography in early pregnancy are minor. Transvaginal ultrasound may cause vaginal and or cervical discomfort during the exam, especially in the setting of a gynecologic infection. Given theoretical risks of harm to the fetus, the principle of ALARA (as low as reasonably achievable) should be practiced by limiting scan time, avoiding the use of doppler, etc. However, overall the consensus is that ultrasonography is a safe diagnostic tool for both the patient and fetus.

Upon pregnancy diagnosis, it is important to discuss the results with the patient. It is essential to determine whether the pregnancy was desired, if the patient has a strong support system, if she feels safe in her current living conditions, and what resources she has available. The patient should be provided with appropriate protections and resources as deemed appropriate by the medical team.

Patients with confirmed intrauterine pregnancies in the emergency department should be directed to follow-up with an obstetrician. Pregnancy must be followed by a healthcare professional. Regular imaging via ultrasound is the standard of care in the United States to monitor fetal development. Additionally, genetic testing is also part of routine pregnancy care.

High-risk pregnancies are considered to be those that pose a potential health or life risk to the mother or fetus.[18] Examples of such factors include advanced maternal age, autoimmune diseases, infectious diseases, diabetes, prior miscarriages, and/or substance abuse. Close monitoring by healthcare professionals is paramount to minimize the risks to the mother and fetus.[19]

Patients should be encouraged to start or continue to take prenatal vitamins; some patients may need additional folic acid supplementation if their fetus is at increased risk of neural tube defects, as per the American College of Obstetricians and Gynecologists.

In the case of a patient with an indeterminate first-trimester ultrasound with an initial beta-HCG level under the discriminatory zone, the hemodynamically patient should be instructed to return in 48 hours for repeat beta-HCG level testing. If this same patient is unstable, an emergent OB/GYN consultation is needed, as ruptured ectopic is the most worrisome consideration. Hemodynamically stable patients with ultrasound findings concerning for ectopic pregnancy (not ruptured), mass, or other complications should be directed to an obstetrician.

A pregnancy test is one of the most important tests to obtain in any female of child-bearing age complaining of abdominal/pelvic pain, amenorrhea, vaginal bleeding, or that is hemodynamically unstable. It is a highly sensitive and specific test, but limitations should be understood. If positive for pregnancy, ectopic pregnancy must be considered as a possibility.

Ultrasonography is a widely used imaging tool in early pregnancy due to its accuracy and favorable safety profile for both the patient and fetus. Information on the ultrasound should be interpreted within the clinical context of the patient and the beta-HCG level. 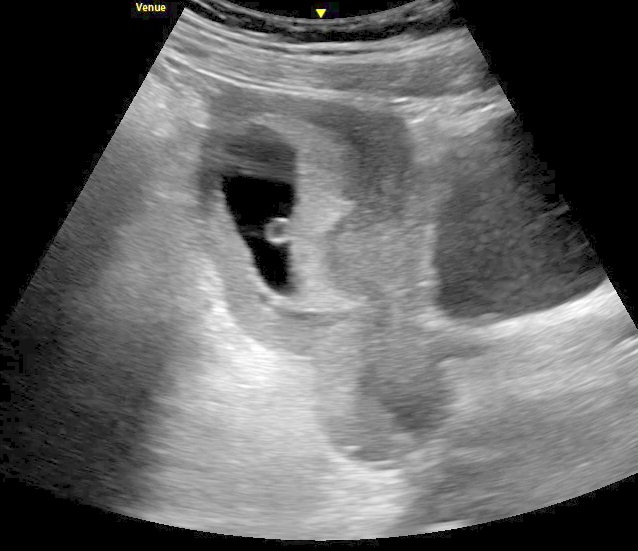 This image demonstrates an intrauterine pregnancy with a yolk sac. On the right of the ultrasound image is a distended bladder.
Contributed by Kenn Ghaffarian, DO 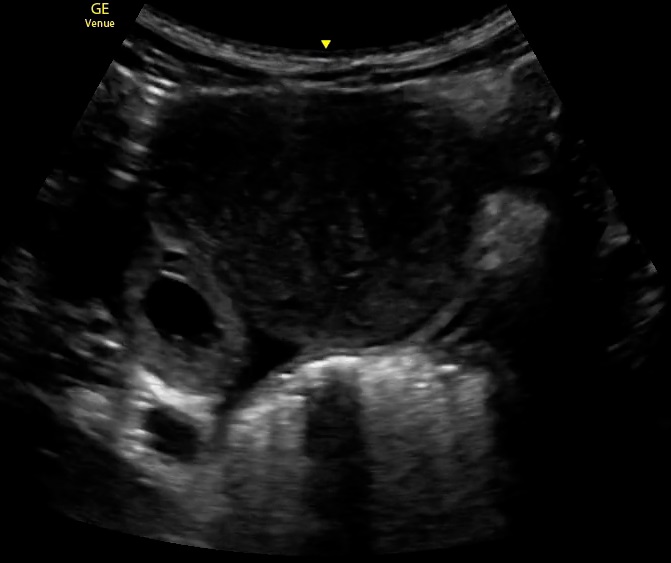