The lower extremity limb bud development begins in the fourth week of development and continues into the fifth week.[1] The angiogenesis of the lower leg’s venous system is thought to be induced by angio-guiding nerves laying out the framework for the venous plexuses that that go on to form the veins of the lower leg. Several venous plexuses merge at the popliteal region of the leg which results in several different configurations of the roots of the popliteal vein.[3]

The sympathetic nervous system is essential in the control of venous capacitance and is responsible for the baroreceptor reflex in which the venous return to the heart increases via a reflex increase in sympathetic tone in response to hypotension.[6]

Muscle contraction of the lower limb is important in maintaining adequate venous blood flow to the heart. Contraction of calf muscles, like the gastrocnemius and soleus, cause an increase in pressure in veins of the lower leg such as the posterior tibial vein. This increased pressure creates a gradient by which the blood can move proximally into the popliteal vein and back towards the heart.[7]

Variations also exist in the vein’s anatomical relationship with its arterial counterpart. The popliteal vein is typically posterolateral to the popliteal artery, though anatomists have noted variations in which the vein crosses the artery and lies medial to it. Additionally, there have been cases reported in which there were no popliteal nor femoral veins but rather a persistent sciatic vein draining the lower extremity in their place.[8]

Because of its location in the popliteal region of the knee, it is crucial to know the location of the popliteal vein in a posterior approach to the knee. The posterior approach to the knee is not a common technique, and its most common utility is in the repair of the neurovascular bundle in trauma cases. Though less common, it also has utility in the repair of avulsion fractures from the posterior cruciate ligament attachment on the tibial plateau, Baker cyst excision, gastrocnemius muscle recession secondary to contractures, and hamstring lengthening.[9]

The popliteal vein is one of the most common locations for the development of deep vein thrombosis (DVT). These can be life-threatening when a portion of a thrombus to breaks off and forms a pulmonary embolus as it travels to the lungs. Also, whenever there is cryptogenic stroke always perform the duplex ultrasound of the legs to rule out deep vein thrombosis. If present, one should perform the transesophageal echocardiography to rule out patent foramen ovale. Patients who have deep vein thrombosis need to start on coumadin or newer anticoagulation agents. The duration of the treatment depends on the provocating factor involved. Common risk factors of DVT include smoking, reduced mobility, recent surgery, and combined oral contraceptive pills.

Superficial venous thrombosis (SVT) is also reported with gaining incidence due to increased recognition and diagnosis. The common predisposing factors are similar to DVT and include varicose veins, immobilization, trauma, obesity, and the use of oral contraceptives. An SVT can occur in tributaries of the popliteal vein including the small saphenous vein. [11]

Popliteal vein entrapment is an uncommon development that typically occurs secondary to a muscular or tendinous anomaly causing compression of the vein. The most common cause is an anatomic variation in the location of the heads of the gastrocnemius muscle. Other causes of entrapment may include popliteal artery aneurysms, hypertrophied gastrocnemius muscles in athletes, and ruptured popliteal cysts. Popliteal vein entrapment can cause similar symptoms to that one might see in chronic venous insufficiency. Some of these sequelae include lower leg edema distal to the entrapment, venous claudication, venous varicosities in the lower extremities, skin stasis changes, and DVT development secondary to venous stasis.[12]

Popliteal vein aneurysms, while uncommon, are another dangerous development in the vessel as they can increase clot formation risk and subsequent pulmonary embolism causing significant morbidity and mortality.[13] 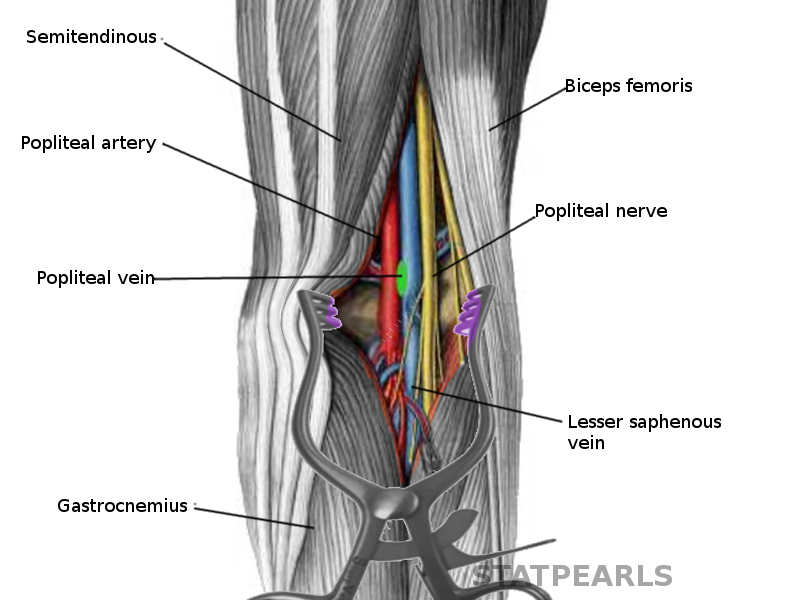 Donnely E,Busuttil A,Davies AH, Do Not Forget Popliteal Venous Entrapment. European journal of vascular and endovascular surgery : the official journal of the European Society for Vascular Surgery. 2017 May;     [PubMed PMID: 28392055]