The pin index safety system (PISS) is a precise configuration of pins and holes that facilitate the connection between a specific medical gas cylinder and the delivery system of these gases.[1] This system was devised to prevent the unintentional placement of a cylinder of the wrong medical gas onto the hanger yoke of the anesthesia machine that was designed for another gas. While this system provides an element of safety, it does not eliminate the possibility of administration of incorrect gas.[2]

Typically, the medical gases supplied to anesthesia machines or workstations are delivered via pipeline from a central piping system. The most commonly used gases are oxygen, medical air, and nitrous oxide; however, when gas delivered via pipeline is contaminated, fails, or is unavailable, cylinders containing medical gas may be used as an alternative source. Orientation and support of the cylinder are provided by the hanger yoke assembly of the anesthesia machine. Unidirectional airflow and effective seal are also set by the hanger yoke, and without appropriately placed pins on both the cylinder and yoke, an appropriate seal is not achieved. A special washer or gasket[1] is used to attain this seal as described below. This system is often utilized for E-cylinders or smaller sizes[3] and is specific for the high-pressure systems within the machine.

The first anesthetic machine, known as the Boyle apparatus, was debuted in 1917; however, the PISS was not instituted until the 1950s. Before the use of the PISS, gases were differentiated from each other by the colors of the cylinders and tubing. To prevent the incorrect tubing from being attached to the cylinder (through either human error or old tubing losing its distinctive and critical color), the Ministry of Health in Great Britain[3] instituted the PISS to try to minimize patient accidents.

Major organizations, including the American Society of Anesthesiologists (ASA), were made aware of the vulnerabilities of medical gas delivery systems during World War II. This war resulted in a high volume of surgeries that manifested the need for an improvement in anesthetic and surgical safety.[4] The PISS now allowed gas cylinders to be fitted with non-interchangeable pin index valves that were specific to the cylinder of a particular medical gas. Such a system was meant to reduce the probability of a medical gas cylinder being improperly connected to the delivery system. The decision was made to install this type of system as it could be easily fitted to the machines without requiring a complete overhaul by the manufacturers; instead, it could be fitted by modifying the hardware that already existed, thereby reducing cost and streamlining implementation. Although it had previously been considered a "fool-proof" safety mechanism, failures of the system have led to quality control improvements and improved safety measures.

Each pin index safety system (PISS) has six possible pin placement sites, depending on the gas within the cylinder. The pins protrude from the gas tank yokes and fit corresponding holes in the cylinder valves, providing a mostly "fool-proof" way of connecting the appropriate gas to the appropriate valve. Two pins will be placed per cylinder, allowing for multiple, medically used gases that have been added to the standard formats. The following are examples of pin locations for gases:

These numbers describe the location of the pins in millimeters from the edge of the yoke,[3] with pin #1 being the farthest to the right when looking at the system straight on. The first pin is located 30 degrees from horizontal on the gas tank yoke, and each subsequent pin is located 12 degrees further down, creating a semi-circle. These numbers and pin placements are standardized across countries.

Multiple documented cases of failure of the pin index safety system (PISS) have led to quality improvements in the system. An early flaw was noted by Pauling in 1983 when a patient died after crossed gas pipelines led to the intraoperative delivery of 100% nitrous oxide instead of oxygen.  In the weeks leading up to the case, a maintenance team in the hospital had stripped the gas line threads in an attempt to replace valves but did not independently test the gases that were able to flow through each line after the work was complete.[5] This case highlights how important it is to ensure proper valve/pin placement. Incorrect setup of any valves, including those involved in filling cylinders, can result in system failure.

A second case report in 1995 documented an incident in which a woman undergoing a laparoscopic cholecystectomy sustained an intraabdominal fire after a trochar caught fire, leading to ignition of the insufflating gas within the abdomen. Post-incident analysis revealed that the company providing the gas had a policy that a canister with greater than 7% CO2 would be fitted with a CO2 pin index; however, this canister had a green stripe around the top to identify it as having majority O2, not CO2. This particular canister that was being used in the OR happened to be 14% CO2 and 86% O2, leading to the OR fire. This incident highlighted the potential for human error in the PISS as well as the potential downfalls in labeling cylinders with mixed gases.[2] Subsequently, efforts were made to distinguish O2 from CO2 and the improve oversight.

In each of the above cases, an investigation was undertaken to determine the cause and prevent a recurrence of each event. While the pin index safety system (PISS) is only used on smaller cylinders, the success of this system was eventually adapted to larger systems, resulting in some countries requiring even larger cylinders to be pin-indexed. The crossing of pipelines in hospitals has resulted in more oversight by maintenance crews, and the mislabeling of canisters has since been addressed. While this system has been designed to improve safety, the system also relies upon clinical oversight of medical equipment, staff vigilance, and careful monitoring of anesthesia gas delivery to patients. 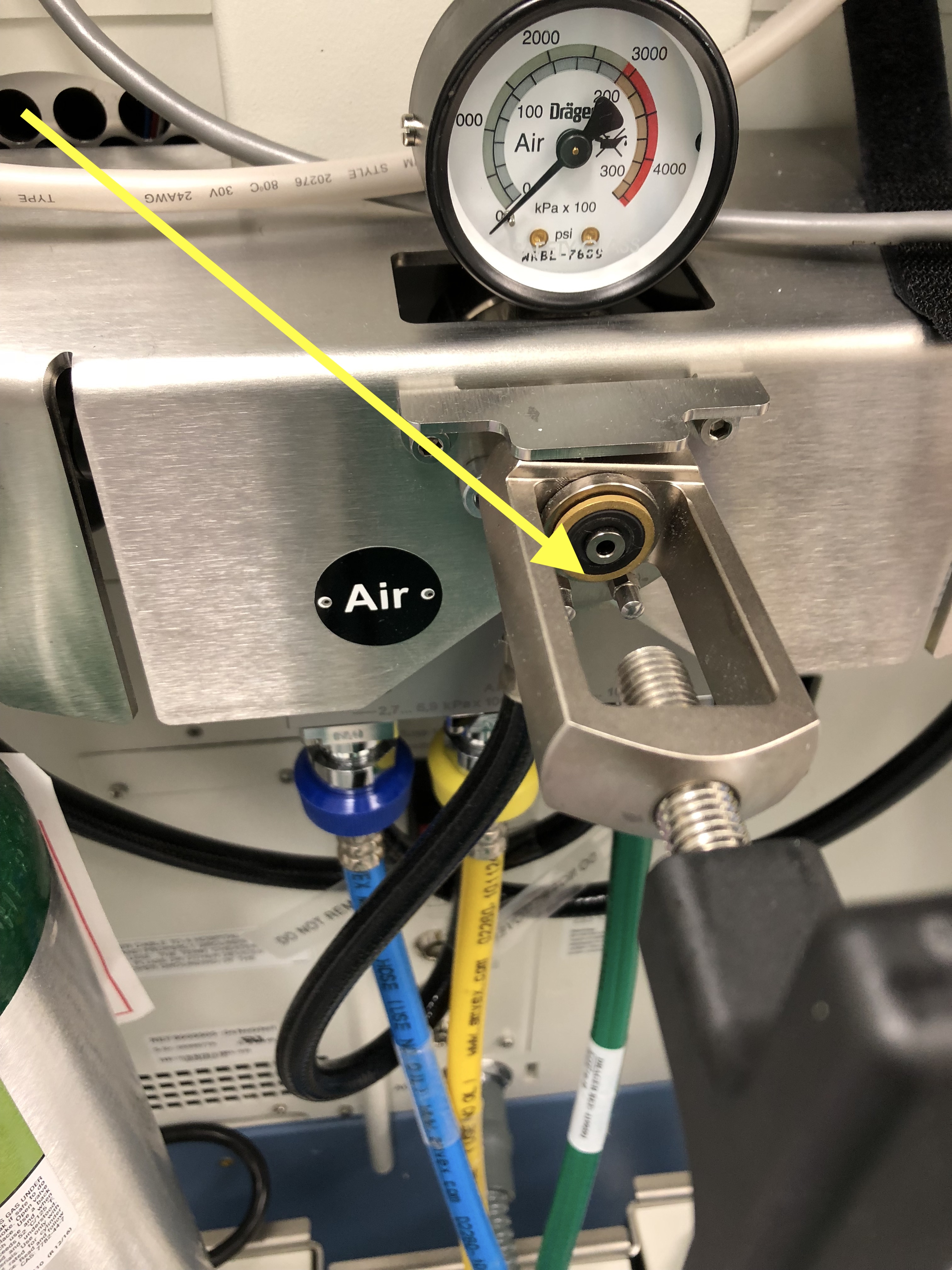 Photograph depicts the pins of the hanger yoke intended to secure a cylinder containing medical air. The arrow (yellow) points to the two pins which correspond to a pin index configuration 1 & 5. Notice the "ring" above the two pins, where a washer provides a seal to prevent leakage of medical gas between the gas cylinder and the anesthesia machine/workstation.
Contributed by Sandeep Dhanjal, MD