The medial pectoral nerve, which is also known as the medial anterior thoracic nerve, arises as a branch of the medial cord of the brachial plexus with fibers originating from the eighth cervical and first thoracic nerve roots. It runs along the lower border of the pectoralis minor muscle, innervating it and also the lower half of the pectoralis major muscle through its distal branch.[1] There may be anatomical variations where the medial pectoral nerve arises from the anterior division of the inferior trunk of the brachial plexus and less frequently from the lower trunk.

The medial pectoral nerve is a peripheral nerve that arises from the brachial plexus. The brachial plexus is formed by the ventral rami of C5 through T1 to form trunks. The trunks form anterior and posterior divisions, which in turn form cords, and the cords end as terminal branches. The neuroectoderm differentiates from the ectoderm into the neural plate, which folds in upon itself to form the neural tube. This process is called neurulation. The neural crest cells located at the most dorsal portion subsequently undergo an epithelial to mesenchymal transition, delaminate from the neural tube, and migrate to different and sometimes distant regions of the embryo.[5] The primordium of the dorsal nerves ends at the level of the humerus, which is the location of the sheath of the primordium of the muscles of the arm. On day 32, nerve extensions form from C5-T1, and on day 33, the nerves join together, and the plexus brachialis begins to form. A similar provision and orientation of the plexus brachialis to that of the adult are observable by days 49 and 50. The abundant anastomosis of the nerve roots from the fourth cervical through the first thoracic segment marks a primitive brachial plexus, where the medial pectoral nerve arises from its medial cord.

The pectoral nerves may be injured by direct trauma, muscle compression, and iatrogenic scenarios such as breast surgery and axillary node dissection. The nerve can also be injured in pectoralis major muscle transfers, but surgical recovery is possible through nerve transfers. The surgical approach to the medial pectoral nerve is from either the supraclavicular or the infraclavicular route at the level of the medial cord. Its surgical accessibility, expandability, and a high number of motor fibers make it an attractive donor nerve for upper plexus injuries.[8] On the other hand, there are different opinions about the use of the medial pectoral nerve as a viable motor donor for brachial plexus injuries. Reports exist of favorable results, for example, in the restoration of elbow flexion, shoulder abduction, and improved serratus anterior strength with transfer to the musculocutaneous nerve, axillary nerve, and long thoracic nerve, respectively, when using the medial pectoral nerve as a donor.[9]

The modified radical mastectomy has become a common surgery for breast cancer.[10] Surgeons should avoid the medial pectoral nerve and the thoracoacromial vessel branches found at the apex of the axillary space during the removal of the lymph nodes. In some procedures such as mastectomy and shoulder dislocations, a neurovascular block of the medial and lateral nerves is necessary to reduce post-operative pain and muscle spasm.[3] Even in breast augmentation procedures using breast implants or the transfer of the pectoralis major muscle in myocutaneous free flap surgery, the cosmetic surgeons have to know the exact course of these nerves and their possible variations.[1]

The medial pectoral nerve can be used for nerve transfer procedures (neurotization) to restore the function of the shoulder after an injury to the upper trunk of the brachial plexus.[9] Nerve transfers have better outcomes with a greater potential for functional recovery because the shoulder's muscular biomechanics are not altered as in the case of tendon transfers.[11] For this type of injury, the primary purpose is to focus on the stabilization of the shoulder with the restoration of shoulder abduction and external rotation because the most distal functions depend on the functionality and stability of the shoulder.[12] 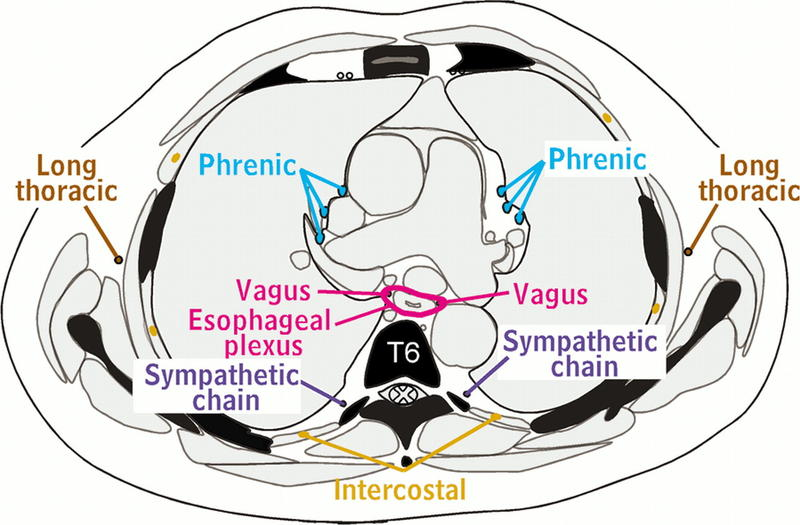 Moosman DA, Anatomy of the pectoral nerves and their preservation in modified mastectomy. American journal of surgery. 1980 Jun;     [PubMed PMID: 7386746]