A mastocytoma is a tumor of mast cells, which are derived from myeloid stem cells and located in connective tissues, predominantly in the skin and mucosal linings. The cytoplasmic granules of mast cells are filled with histamines, peptides and other cytokines which play an active role in immune responses, especially in allergic and anaphylactic reactions. This activity reviews the cause and pathophysiology of mastocytoma and highlights the role of the interprofessional team in its management.

A Mastocytoma is a tumor of mast cells, which are derived from myeloid stem cells and located in connective tissues, predominantly in the skin and mucosal linings. The cytoplasmic granules of mast cells are filled with histamines, peptides and other cytokines which play an active role in immune responses, especially in allergic and anaphylactic reactions.

Clonal proliferation of neoplastic mast cells can lead to localized and systemic manifestations, categorized under the term 'mastocytosis' and classified as a myeloproliferative disorder in the WHO classification of tumors of hematopoietic and lymphoid tissues. Majority of patients with mastocytosis have skin involvement, and while the cutaneous disease is localized to the skin, systemic mastocytosis requires the participation of one or more extracutaneous organ. In adults, the disease tends to be chronic and systemic while the purely cutaneous disease is usually seen in childhood. Cutaneous mastocytosis can range from solitary mastocytoma to diffuse erythrodermic mastocytosis, most commonly presenting as maculopapular lesions known as urticaria pigmentosa (UP)[1].

Although etiology of the disease is not completely clear, the microenvironment of the lesional tissue reveals an increased concentration of growth factors and interleukins that induce proliferation of mast cells and melanocytes and inhibit mast cell apoptosis are believed to play a role.  Somatic mutations of the c-kit gene leading to increased activation of mast cell growth factor are also implicated but may not be the initiating factor in the proliferation of abnormal mast cells[2]. The most common c-kit mutation is the D816V in exon 816, found in both adult and childhood cases[3]. Although these mutations are somatic, rare familial cases in autosomal dominant fashion have also been reported[4].

Cutaneous mastocytosis without systemic involvement tends to affect children with the majority of patients presenting during the first two years of life[5]. Both mastocytoma and UP lesions can also be present at birth. UP constitutes the majority of cases with 70-90%, followed by mastocytomas or nodular proliferations in 10-35% of cutaneous mastocytosis[1]. Diffuse involvement is rare, comprising only 1-3% of cases[1]. Mastocytomas are usually solitary. However, less than four lesions are categorized under mastoctyoma. The disease does not show any predilection for gender or race. Rare cases of adult-onset cutaneous mastocytoma are also reported in the literature[6].

While the accumulation of mast cells appear as maculopapular or nodular lesions, physical stimuli like rubbing or pressure on the lesion results in degranulation of mast cells, thus releasing histamine, leukotrienes, and prostaglandins that cause localized and systemic symptoms.

Histologic examination shows dermal infiltrate of mast cells, primarily in the papillary dermis that can be accompanied by dermal edema and eosinophils. Mast cells tend to aggregate around blood vessels and appear as a spindle to round cells with pale granular cytoplasm and pale nuclei. Nuclear pleomorphism and lobation are also reported in rare case reports[6] However, frank nuclear atypia is not seen and should raise suspicion for malignant transformation. Infrequent mitoses can be observed. Deep dermal and subcutaneous infiltration can be seen in nodular forms. Giemsa or toluidine blue stain highlights metachromatic granules whereas positive immunophenotypic expression of tryptase, C-KIT and aberrant immunophenotypic or flow cytometric positivity for CD25 and less commonly CD2 can confirm the neoplastic nature of mast cells.

Cutaneous mastocytosis can involve any part of the body, but mostly it is found on the trunk and extremities. Lesions can be single or few, of variable size and appear as yellowish brown pigmented macules, papules or nodules. The lesions are generally non-tender but can be associated with intermittent itching and erythema. Rubbing or stroking the lesion can degranulate the mast cells and cause flushing, itching, and swelling of the skin, known as Darrier's sign which is pathognomic of the disease. The blistering and bullous presentation is common in children less than three years of age and can also be present in diffuse and severe forms of the disease. The difference between mastocytoma and UP is based on the number of lesions present when the number is three or fewer nodules it is a mastocytoma. The diffuse disease presents with thickened, leathery skin without individual lesions.

Telangiectasia macularis eruptiva perstans is an extremely uncommon variant that may present as red telangiectatic macules and may be found in conjunction with UP. No scarring results from any of the lesions. While there is no systemic involvement in cutaneous mastocytosis, symptoms of wheezing and syncope have been reported. Gastrointestinal symptoms including diarrhea have been reported in about 40% of children. Alternatively, a full-blown acute mast cell activation causing anaphylactic symptoms may also occur.

While the diagnosis of cutaneous mastocytoma/mastocytosis can be made on the physical appearance of the lesions, especially if Darrier's sign is present, histology and molecular tests are required to differentiate from mast cell hyperplasia or reactive conditions. WHO classification involves the presence of both clinical and histologic findings and exclusion of systemic disease before the diagnosis of cutaneous mastocytosis/mastocytoma is made. A Fine Needle Aspiration Biopsy of the lesion is sufficient to diagnose mast cell proliferation. However, surgical biopsy may be required to fully differentiate as cells can vary from well-differentiated to poorly differentiated. The disease is staged into four stages based on WHO criteria.

Dermatoscopy findings are non-specific. Baseline serum tryptase level and CBC should be performed before therapy. Elevation of serum tryptase and bone marrow involvement is generally not seen in pediatric cutaneous disease but may be present in adult patients. Pediatric cases with systemic symptoms, abnormal CBC, failure of symptomatic therapy and elevation of tryptase can also be evaluated for bone marrow abnormalities. Abdominal ultrasound can be performed to exclude organomegaly.

Treatment is symptomatic and aimed to reduce triggers (rubbing, change in temperature, dryness, etc) that may cause mast cell release. Oral antihistamines and topical corticosteroids are generally used to alleviate symptoms. Phototherapy has also been used to relieve pruritus. Cytoreductive and surgical therapy is reserved for systemic cases. Epinephrine should be used for any cases showing symptoms of anaphylaxis.

WHO staging system classifies the disease into four stages based on the number of lesions, the involvement of Lymph nodes and distant metastases

Cutaneous mastocytosis follows a benign course and overall carries a good long term prognosis. Children with the onset of disease before 2 years of age generally end with the complete resolution of the disease by 10 years of age [7]. Unresolved cases and cases that appear after 2 years of age are likely to persist. While adult-onset cases usually manifest with systemic symptoms, persistent cases from childhood can occasionally progress to systemic disease. An increased risk of systemic disease in pediatric cases is seen in those who present with the disease after 2 years of age, the presence of symptoms beyond adolescence or those with abnormal blood counts. Both persistent and adult-onset disease, albeit rare, have a risk of malignant sarcomatous (characterized by atypical mast cells) or leukemic (atypical, immature mast cells in blood) transformation [8][9].

Darrier's sign may be present in only half of the cases.

While pediatricians may be the first one to encounter the disease, a dermatology consult remains essential. Histologic confirmation is one of the diagnostic criteria and thus a pathologists' interpretation is also needed for the definitive diagnosis. Radiology can be involved in cases with systemic involvement to localize subclinical organomegaly, if present.  It is important to educate the patient on the avoidance of triggers. All patients should be educated on how to use epinephrine and carry the medication with them at all times. A bracelet with an ID and disease identification is highly recommended for patients with a previous anaphylactic reaction. Patients with cutaneous mastocytosis have a good prognosis but those with a malignant cause have a guarded prognosis.[10] (Level V) 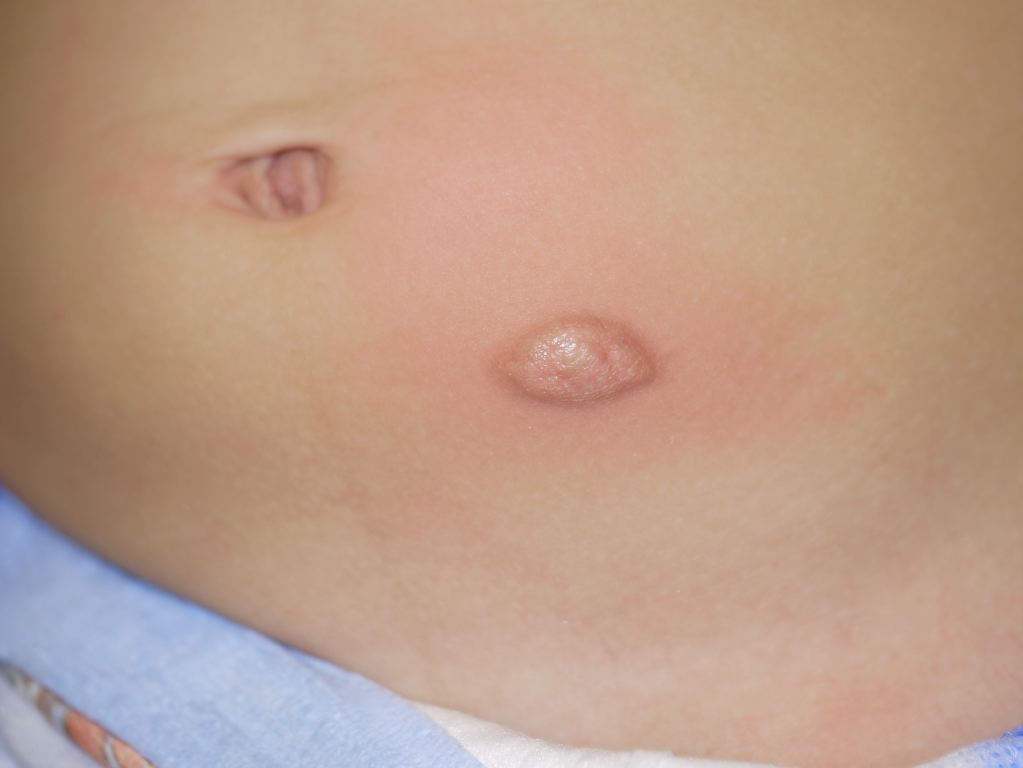