The normal size of a tongue is variable and differs with increasing age with the greatest growth occurring in the first 8 years since birth and attaining full growth at 18 years of age.[1] Macroglossia generally refers to long term painless enlargement of the tongue.[2] The term macroglossia is defined as the resting tongue, which protrudes beyond the alveolar ridge or teeth.[3] Macroglossia is an uncommon anatomical abnormality and is usually a sign of an underlying condition and rarely seen alone. It is seen in a wide variety of conditions. Isolated macroglossia is very rare and is inherited as an autosomal dominant trait. Depending on the size of the tongue and other structures in the oral cavity, it can be classified as true macroglossia and relative macroglossia.[4]

True and relative macroglossia may be further subdivided into congenital and acquired disorders. In true macroglossia, there is an apparent enlargement of the tongue due to an underlying disease or condition, and relevant histopathological findings can be noted. In relative macroglossia, the tongue appears larger than compared to other structures in the oral cavity. Prominent examples include Down syndrome, where tongue appears enlarged due to hypotonia and Pierre Robin syndrome due to micrognathia.[4]

The etiology of macroglossia is multifactorial. It can be inherited as an autosomal dominant genetic trait and present as isolated true macroglossia or could be one of the features in inherited genetic syndromes. In true macroglossia, enlargement of the tongue occurs due to tissue overgrowth from lingual muscular hypertrophy or glandular hyperplasia, tissue infiltration, infectious or inflammatory causes. It is seen in both congenital and acquired conditions.

Macroglossia is an unusual but potentially lethal postoperative complication that may follow neurosurgical procedures in the posterior cranial fossa done in the sitting position. This is attributed to compression of arteries and veins during excessive neck flexion as well as mechanical compression of the tongue by endotracheal tube or an oral airway. Complete airway obstruction may occur immediately or after 30 minutes in cases of reperfusion injury after relief of obstruction. The incidence of this complication is estimated at 1%[6] Amyloidosis is the most frequent cause of macroglossia in adults, the tongue is involved in both its primary and secondary forms and in children, common causes include Beckwith-Wiedermann syndrome (BWS), hypothyroidism and Down syndrome. Macroglossia can also develop as a side-effect in HIV positive patients on lopinavir and ritonavir therapy.[7]

Macroglossia is the most frequent oral manifestation of amyloidosis and maybe the only presenting symptom of the disease. One should have a high level of suspicion for amyloidosis when a patient presents with macroglossia and tongue ulcerations.

Acromegaly is a rare endocrinologic condition due to excessive secretion of growth hormone resulting in a syndrome of coarsened facial features and overgrowth of the jaw, tongue, hands, and feet. Macroglossia is a classical finding in patients with acromegaly. Other notable features include prognathism, prominent mandible, limited mouth opening, obstructive sleep apnea, large hands and feet, and carpal tunnel syndrome. Airway obstruction due to macroglossia and hypertrophy of laryngeal/pharyngeal mucosal tissues leads to upper airway obstruction, snoring, and obstructive sleep apnea in approximately half of the patients with acromegaly and this can complicate tracheal intubation during anesthesia.

Macroglossia is a common feature in patients with Beckwith Wiedemann syndrome. BWS is an overgrowth disorder characterized by macroglossia, gigantism, midline abdominal wall defects, neonatal hypoglycemia, and visceromegaly. Babies and children with this syndrome are larger than normal, usually until age eight, after which growth shuts down, and they attain average height. They have features of asymmetric growth, crease, or pits in the skin near ears, among many other features. BWS falls into a clinical spectrum and that some features that are considered classical are not present in every patient, and the diagnosis should not be missed. Of children diagnosed with classical BWS, 90% have macroglossia, and BWS spectrum is the most common cause of macroglossia in childhood.

Hypothyroidism is a common cause of macroglossia in children. In hypothyroidism, along with macroglossia affected children also suffer from short stature, delayed puberty, dry skin, and brittle hair. Patients with Down syndrome present with a short neck, hypotonia, a tongue that tends to stick out more, small ears, and has distinctive facial features. The tongue may appear enlarged due to hypotonia seen with this condition.

The true incidence and sex predilection of this condition are not known and are difficult to assess because of its association with many genetic conditions.[8] It is a relatively uncommon condition. Isolated true macroglossia alone in its autosomal dominant form is a very rare condition, and about 50 cases only are reported in the literature.[9]

Usually generalized, painless, gradual enlargement of the tongue is noted. Muscular hypertrophy or glandular hyperplasia is seen in most cases of primary macroglossia. In acquired conditions, pathophysiology differs based on whether it is an infiltrative condition, trauma, vascular or lymphatic malformation. For example, amyloid deposition fibrils are noted in the tongue and aids in diagnosis. In amyloidosis, macroglossia, due to amyloid depositions, can cause cosmetic problems, tongue ulcerations, functional disability, and life-threatening airway obstruction. A Congo red stain of a tongue biopsy specimen will show amyloid material as a peach-red color under light microscopy and, when viewed under polarization, will show the characteristic apple-green birefringence.

Macroglossia happens due to the accumulation of adipose tissue in the submucosa of the tongue.

Macroglossia in hypothyroidism is due to increased accumulation of subcutaneous mucopolysaccharides due to a decreased degradation.

Diagnosis is made clinically on the basis comparison with a normal looking tongue due to lack of standard size of the tongue. Infants may present with feeding difficulties, poor weight gain, and failure to thrive due to protrusion of the large tongue. They may also present with speech difficulties, misaligned, or protruded teeth in later life. Necrosis may be noted on the tip of the tongue, and ulcerations may be noted throughout the tongue.

The tongue may be displaced upwards and forwards in lesions affecting the tongue, including tumors, Ludwig angina, etc. Patients with generalized or posterior enlargement of the tongue may present with airway obstruction that can be life-threatening.[10] Patients with macroglossia and those with chronic airway obstruction may present with signs of cardiac decompensation and pulmonary hypertension.

A careful history and physical exam are needed to recognize any undiagnosed syndromes. Assessment of the tongue should include changes in color and consistency as well as the presence of any masses. Further laboratory and imaging tests should be done based on clinical suspicion of a specific condition, for example, thyroid function tests, isotopic imaging of thyroid gland, chromosomal studies, molecular studies for Beckwith Wiedemann syndrome, metabolic profile, urinary mucopolysaccharide assay, and abdominal ultrasound.[11]

Neoplasia should always be considered during the evaluation. If neoplasia is suspected based on the exam, samples of the tongue lesion obtained via fine needle aspiration technique in the clinic by an experienced professional give diagnosis in most cases, and for large lesions biopsy in operating theatre may be needed. Radiographic and cross-sectional imaging may be needed in selected cases, and it is typically not to identify macroglossia, which is usually diagnosed clinically, but rather to identify other underlying pathologies such as masses or vascular malformations.

Computed tomography and magnetic resonance imaging may be useful to delineate soft tissues and to show the extent of tumors and other masses. For some acquired conditions like amyloidosis, a biopsy of other tissues such as skin, the rectum is indicated for definitive diagnosis. Electrocardiogram, echocardiogram, chest X-ray, arterial blood gas analysis may be needed in patients who present with symptoms of chronic airway obstruction to rule out underlying cardiac complications.

The underlying cause of macroglossia should be diagnosed and treated. Various modalities of treatment, including medications, surgery, radiation, and orthodontic treatment, may be used to treat macroglossia.

Referral for surgery may be appropriate for residual macroglossia that may be causing complications such as airway obstruction despite the completion of successful treatment. The conservative method is usually desired, whenever possible. In severe macroglossia or macroglossia due to neoplasia or when functional impairment such as speech and swallowing difficulties, facial skeleton abnormalities, and its psychological consequences are present reduction glossectomy is indicated. Reduction glossectomy is usually required in about 10% of cases of macroglossia. More than 20 surgical techniques have been proposed. Whenever possible, partial glossectomy should be conservative as much as possible, more so in benign disease, to retain functions of the tongue. Thyroxine may be used in cases of hypothyroidism, and bromocriptine may be used in cases of acromegaly for beneficial effects. Corticosteroids can be used postoperatively to treat edema of the tongue and maybe life-saving in acute obstructions.[3]

Patients with acromegaly and macroglossia who do not respond to medical therapy may benefit from partial glossectomy.

Improvement of macroglossia occurs after discontinuation of the lopinavir/ritonavir.

Macroglossia may regress spontaneously. About 40% of children with BWS undergo a surgical tongue reduction.

The main differential diagnosis for macroglossia includes conditions that cause pseudomacroglossia. Conditions that displace the tongue and force it to sit in an abnormal position and making it appear enlarged, such as low palate, enlarged tonsils, tumors of the oral cavity, abnormalities of mandible and maxilla arches, and hypotonia cause pseudomacroglossia. Various tumors and vascular malformations could result in macroglossia and may need imaging to characterize. Endocrine abnormalities and congenital syndromes where macroglossia is one of the manifestations should be considered based on clinical findings and laboratory analysis. Deposition diseases such as amyloidosis will have to be diagnosed by clinical, laboratory, and pathology analysis. Acute conditions that can cause temporary tongue swelling such as trauma, allergies, and infections are other differential diagnoses.

The clinical course is usually benign for most of the cases. In patients who have complications, interventions should be considered to improve clinical outcomes. Prognosis ultimately depends on the severity, underlying etiology, and success of treatment measures.

Macroglossia may cause nasopharyngeal obstruction, leading to total obstruction of the airway and subsequently, cerebral anoxia and sudden cardiac arrest. This is more likely to happen in the supine position when the base of the enlarged tongue obstructs the hypopharynx and oropharynx more easily. Some patients may have difficulty in chewing, and this might cause severe pain in the temporomandibular joint. The protrusion of the tongue exposes it to trauma. It leads to mucosal drying and recurrent upper respiratory tract infections.

Other symptoms include drooling, swallowing difficulties, airway obstruction, mandibular deformities, teeth spacing abnormalities, and failure to thrive. Due to abnormal size and position, patients may suffer from speech and articulation problems. Macroglossia makes intubation difficult, and care should be taken as blind intubation may result in trauma.

Patients should be educated on the complications of macroglossia and the serious consequences of it. Regular followup for children should be stressed for the screening of speech problems and identification of dental malocclusion.

Macroglossia is a rare condition. A thorough history, including a family tree of three generations, physical exam, and relevant investigations based on suspicion, helps in identifying the underlying etiology of macroglossia.[12] In some cases, macroglossia is spontaneously corrected due to more pronounced orofacial growth to accommodate the tongue.[13] Most cases can be managed conservatively without the need for surgery. Glossectomy is reserved for severe cases or when patients present with airway obstruction, speech, and swallowing difficulties or when there are psychological effects due to cosmetic changes from macroglossia. Diagnosing etiology of macroglossia and its treatment, including timing surgery, is challenging, and a multidisciplinary team of orthodontists, surgeons, physicians, radiotherapists, and geneticists may need to coordinate care for these patients. Psychiatrists play an important role in patients suffering from psychological disturbances due to facial abnormality.[3] Patient education is important and regular followup should be emphasized. The majority of publications on this topic were case reports and case series. 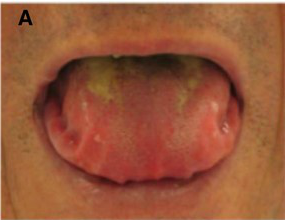