Lung biopsy is a widely accepted procedure for diagnosing pulmonary disorders by obtaining samples of lung tissue. Besides lung nodules and masses, a wide array of pulmonary disorders, including interstitial lung diseases, hypersensitivity pneumonitis, sarcoidosis, and infections like tuberculosis, can be diagnosed by lung biopsy. This activity outlines the various techniques of lung biopsy, the indications, contraindications, complications, and the role of an integrated interdisciplinary team approach that has been discussed for carrying out various tasks related to the procedure, including nursing assistance and pre-procedure patient education.

Lung nodules and masses can be challenging at times to diagnose and often require invasive procedures.[1] Lung biopsy is a popular and widely accepted procedure for obtaining samples of lung tissue to diagnose a wide array of pulmonary disorders. Lung tissue can be obtained for histopathological examination via the following methods:[2]

This article aims to review the various techniques of lung biopsy. An integrated interdisciplinary team approach has been discussed for carrying out various tasks related to the procedure, including nursing assistance and pre-procedure patient education.

Anatomy relevant to lung biopsy has been discussed in this section.

The right lung has oblique and horizontal fissures dividing it into three lobes with ten segments.

The left lung has the oblique fissure dividing it into two lobes.

Chest wall: The thoracic wall consists of the rib cage that forms the bony skeleton wall and the skin, the underlying muscles, and fascia. From superficial to deep, the chest wall contains the following layers:

New lesions on chest imaging should be evaluated by a multidisciplinary team involving chest specialists, surgeons, and radiologists to decide the next best management.[3] A lung biopsy is required when there is a need to provide a specific diagnosis.

Indications for PTLB according to the BTS guidelines (in near-verbatim language) are as follows:[3]

Transthoracic needle biopsy (TTNB) is indicated for evaluating an undiagnosed pulmonary nodule or mass depending on the pretest probability of cancer and the presence or absence of metastasis. TTNB is also useful for the evaluation of mediastinal masses, hilar masses that are undiagnosed post bronchoscopy, and also for the diagnoses of infective diseases presenting as nodules or consolidation.[4]

Transbronchial biopsy (TBLB) is useful for diffuse and localized pulmonary disorders and is often the primary diagnostic modality for centrilobular lesions like sarcoidosis, interstitial lung disease, hypersensitivity pneumonitis, eosinophilic pneumonia or infective etiology like tuberculosis, or lung disease of unclear etiology is suspected.[5][6]

VATS has been preferred over traditional surgery due to lesser complications and early recovery. It is indicated for mediastinal lymph node biopsy, pleural biopsy, a biopsy of lung tissue/lymph node, and undetermined interstitial lung disease.[7][8]

Traditionally, an open or surgical biopsy (OLB) has been considered as the gold standard for the diagnosis of lung parenchymal lesions. However, a trial of a less invasive method is usually preferred unless any major contraindications and OLB should be considered only when obtaining a diagnosis would change the line of management, and the underlying disease does not have high mortality.[9]

There are many relative contraindications for PTLB as described in the BTS guidelines (in near-verbatim language): [3]

For transthoracic biopsies, besides bleeding diathesis, other contraindications include severe emphysematous disease, presence of bullae that obstruct the path of biopsy, patients with intractable cough, patients on mechanical ventilation, and patients with pulmonary hypertension.[4] Contraindications for obtaining biopsy samples via flexible bronchoscopy include lack of informed consent, severe bleeding diathesis that is uncorrectable before the procedure, severe hypoxemia, uremia, thrombocytopenia, and pulmonary hypertension.[10][11]

Besides poor general condition, coagulopathies, and recent MI, VATS is contraindicated for patients with the inability to tolerate single lung ventilation.[12]

CT Guided Percutaneous Lung Biopsy: Depending on the decision to perform core biopsy alone or along with FNA, several options for percutaneous lung biopsy needles are available, including aspiration and cutting needles. The choice of the needle also depends upon factors like the size of the lesion, needle trajectory, and operator preference.[13] A typical coaxial setup would include a 22-gauge Chiba needle for FNA or a 20-gauge gun to obtain a core biopsy. The procedure is performed with detailed imaging under fluoroscopic or CT guidance. A team consisting of a radiologist and cytopathologist should be available for the procedure and check for the adequacy of the sample.

Transbronchial Biopsy: Essential equipment includes an adult size flexible bronchoscope with a light source and video monitoring. Tissue samples are taken with the help of biopsy forceps that are placed in specimen containers. Suction apparatus, oxygen supply and also, equipment to provide cardiopulmonary resuscitation must be available.

Cryo-TBB: A specialized flexible probe is used for freezing and sampling the lung tissue to -89 F using nitrous oxide gas.

Open Lung Biopsy: It is an invasive operative procedure under general anesthesia, and all anticipated equipment should be prepared before the procedure, including a thoracotomy tray, forceps, stapling devices, and complementary instruments.

Depending on the type of the procedure and the setting, the following personnel may be required:

Preoperative Evaluation: Coagulation indices, including prothrombin time (PT), activated partial thromboplastin time (APTT), platelet counts should be evaluated before the procedure. Patients with pre-procedure platelet counts of less than 100 000/m and an APPT ratio or PT ratio of more than 1.4 need a hematologist consultation and is a relative contraindication for the procedure. Oral anticoagulants must be stopped before the procedure in the case of PTLB as per the guidelines for perioperative anticoagulation.[3]

For patients with FEV, less than 35% predicted on recent spirometry should be evaluated by a multidisciplinary team with a radiologist and pulmonologist as a minimum should be consulted to assess the risk vs. benefit of going ahead with the procedure. Recent as well as previous radiographs must be available to decide if the procedure is beneficial. In the case of a bronchoscopic biopsy, the procedure should not be performed within six weeks of myocardial infarction.[3]

CT Guided Percutaneous Lung Biopsy: Preferably, under moderate sedation, images via CT or CT fluoroscopy are taken, and the route of access is planned. At times a coaxial technique may be used to minimize the number of pleural punctures. After confirmation of position with CT images, either FNA or core biopsy is taken, and the sample is immediately handed over to either a cytopathologist or cytotechnician.[13] Other advanced techniques like the trans-sternal approach and the transvenous approach may be used.

Transbronchial Biopsy: Bronchoscopy remains pivotal for the diagnosis of central airway lesions. The sequence of events for carrying out a transbronchial biopsy are as follows:

Cryo-TBB: Transbronchial cryobiopsy (cryo-TBB) is performed under moderate sedation using a specialized, flexible probe that uses nitrous oxide to cool the tip -89 degrees C rapidly, thus freezing adjacent tissue that is then removed attached to the tip of the probe.

VATS: Anesthesia is administered to the patient in a supine position before the procedure, and a double-lumen tube (DLT) is inserted, which is usually the airway of choice. Three incisions are made in the anterior approach, and classically three ports are created, including the camera and operating ports, which are checked with the video thoracoscope. Further steps are guided depending on the specific procedure to be performed. Appropriate pain control, respiratory and chest tube care must be provided post-operatively.[7]

Open Lung Biopsy: Under general anesthesia with the patient in the supine position, an incision is made 2-3cm lateral to the nipple line. The pleura is entered between the fifth and sixth rib, and blunt dissection is carried out to bring the lung tissue in the operating field. Diagnostic wedge resection is done using a line stapler. Biopsy samples are sent to the histopathologist for processing in formalin.

Lung biopsies are performed in elective as well as emergent situations. The need for lung biopsy in each case should be determined by a multidisciplinary team approach, at least involving a pulmonologist and a radiologist.

In interstitial lung diseases, lung biopsy is recommended when the radiological pattern is non-classical for UIP or a possible UIP. Lung biopsy is also of significance in patients with clinical features such as age less than 50 years, weight loss, fever, hemoptysis, or signs of vasculitis. It is also indicated in patients presenting with a progressive disease course, atypical or rapidly changing HRCT findings, unexplained extrapulmonary manifestations, or pulmonary vascular disease of unclear origin. Specific neoplastic and infectious processes that can mimic chronic, progressive ILD can also be excluded from a lung biopsy. For immunocompetent patients, elective and urgent lung biopsies result in therapeutic changes and have acceptable operative mortality rates. Emergency biopsies rarely result in therapeutic changes and have high operative mortality rates.[14]

Percutaneous CT guided biopsy is a safe and efficacious method for the diagnosis of intermediate pulmonary lesions. It is indicated for lesions that appear malignant and in cases with high suspicion for malignancy. An initial CT scan helps in determining the accessibility of the lesion and the risk of pneumothorax. Results of previous studies for CT guided lung biopsy of small lesions had safe and accurate outcomes but less accurate when compared to large lesions.[15] When compared with FNA, core biopsy has been shown to have a slightly higher overall sensitivity, specificity, and accuracy with an improvement in the definitive diagnosis of benign lesions. However,  core biopsy is not recommended for lesions <10 mm due to the increased complication rates and decreased diagnostic accuracy.[13]

With regards to TBLB, it has often been accepted as a conventional method for lung biopsy for a long time for a wide array of diseases, including ILD's, vascular diseases, small airway diseases, and malignancies. It is a safe procedure having low overall mortality of 0.1% compared to surgical lung biopsy (1%). Another advantage is that the procedure does not require general anesthesia and can be done as an outpatient procedure.[16] It can be used for central (accessible) lesions. However, the procedure is not as sensitive as a percutaneous biopsy for lesions less than 2cm. Comparatively, percutaneous, and surgical lung biopsy has a superior diagnostic yield. Cryo-TBB is safe and generally free of major complications. Besides the risk of massive bleeding, post-procedure pneumothorax ranges from 2.6 to 30 %, moderate bleeding from 4 to 78 %, and rarely death (0.3 %) have been reported.

Although VATS has been preferred over surgical lung biopsy, there are situations like severe pleural disease, anticipated bleeding, or more severe respiratory impairment that favor the use of SLB-thoracotomy. Patients with severe hypoxemia or mechanical ventilation are not good candidates for VATS, as it requires a period of single lung ventilation.

Recent advances in interventional pulmonology have further revolutionized the diagnosis of lung masses, nodules, lymphadenopathy, and pleural diseases. Newer diagnostic modalities like convex probe (CP) and radial probe (RP) EBUS (endobronchial ultrasound), ENB (electromagnetic navigational bronchoscopy), Cone beam CT and robotic bronchscopy are now available. The yield of these newer modalities is comparable to that of CT guided biopsy with lesser complications. These interventions help in the early diagnosis and management of the patients.[17]

As discussed earlier, the decision to undergo lung biopsy and the specific type of procedure must be made by a multidisciplinary team, comprising of a radiologist, surgeon, and chest specialist.[3]

Post-procedure monitoring of vitals is essential by the nursing staff for several hours after the procedure and appropriate chest tube care if present. 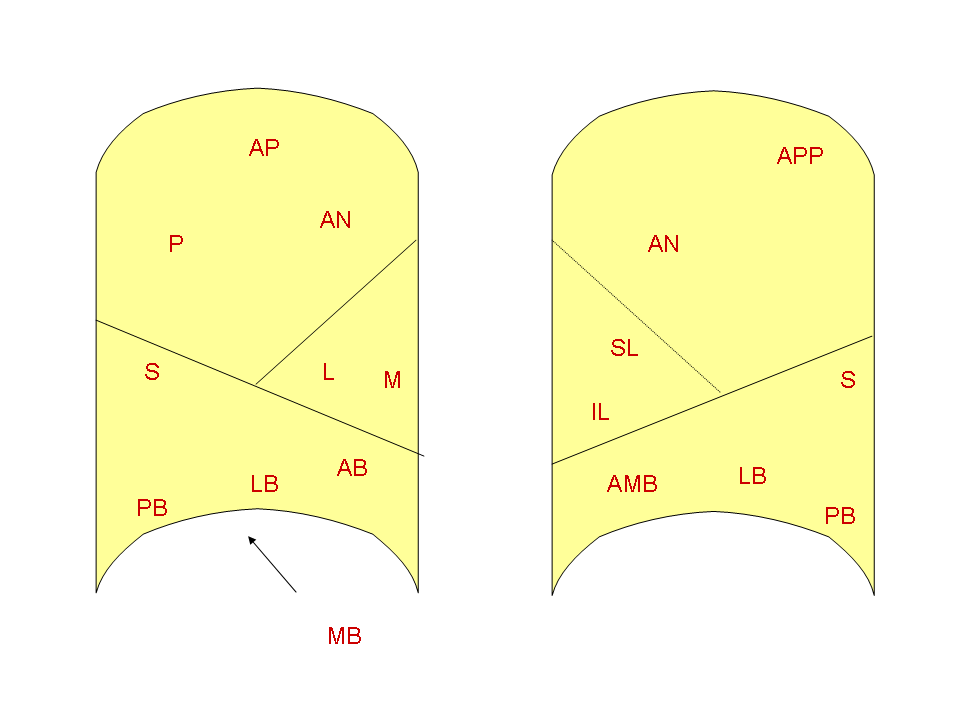