The human larynx is a specialized organ complexly organized of multiple tissue types. Although the intricate care, study, and surgical management of the larynx fall under the specialty of otolaryngology, knowledge of the larynx and associated conditions is beneficial for many medical specialties. Its position in the human body and unique functions allow the pathophysiology of the larynx to involve a spectrum of conditions and treatments from lifesaving respiratory interventions to improvements in voice quality.

The structure of the larynx divides into three basic parts: the supraglottis, the glottis, and the subglottis.[1]

The primary functions of the larynx are in respiration, airway protection during deglutition, and phonation. In respiration, vocal folds are optimally in abduction, increasing the total area of the glottis to facilitate work of breathing.[4] When swallowing, the epiglottis is pulled posteroinferiorly to cover the glottis, allowing the bolus to pass safely into the hypopharynx and esophagus without compromising the airway. In phonation, the vocal ligaments, muscles and overlying mucosa are tensed and adducted to vibrate at frequencies appropriate for human speech.[4]

The development of the larynx begins on approximately the third week of gestation with the generation of the laryngotracheal groove in the 6th pharyngeal arch.[5] This groove eventually deepens to form the laryngotracheal diverticulum, also known as the lung bud. The diverticulum extends rostrally to develop the trachea and rest of the lower respiratory system. The mucosa of the larynx derives from the endoderm of the pharyngeal arches, whereas the cartilage and musculature of the larynx arise from the mesoderm.[5] The majority of laryngeal structures form from the fourth (thyroid cartilage, cuneiform cartilages, part of the epiglottis, superior laryngeal nerve, cricopharyngeus muscles, and cricothyroid muscles) and sixth(recurrent laryngeal nerves, cricoid cartilages, arytenoid cartilages, corniculate cartilages, and remaining intrinsic muscles). The second pharyngeal arch contributes to the majority of the hyoid bone, and the third pharyngeal arch develops the greater cornu of the hyoid and a portion of the epiglottis.

By ten weeks of gestation, the laryngeal inlet develops a covering membrane.[5] This membrane recanalizes to opening the larynx to the lower respiratory system and forming the vestibule of the larynx.

Lymphatic drainage is important to understand due to the aggressive metastasis of some laryngeal cancers. Though the lymphatic drainage can vary individually, there are understood consistencies. Supraglottic structures drain lymph to the deep cervical lymph nodes, which can further subdivide into levels. Subglottic structures drain lymph to the paratracheal and pretracheal lymph nodes.[1]

The cervical rootlets comprise the plexus known as the ansa cervicalis. The ansa provides innervation to many of the extrinsic muscles of the larynx such as the infrahyoid and suprahyoid musculature. The pharyngeal branch of the vagus nerve innervates the pharyngeal constrictors, which act with the suprahyoid muscles to elevate the larynx during swallowing.

Several cervical muscles act extrinsically on the larynx to aid in phonation and swallowing. Muscles inserted on the superior aspect of the hyoid (geniohyoid, digastric, mylohyoid, thyrohyoid, and stylohyoid muscles) and pharynx (stylopharyngeus, palatopharyngeus, and pharyngeal constrictor muscles) act in conjunction to elevate the larynx. Those muscles inserted on the inferior surface of the hyoid (sternohyoid and omohyoid muscles) and the sternothyroid muscle act to depress the larynx.[8] Because of the elevation of the larynx during swallowing, physical exam maneuvers to examine the thyroid often involve the patient voluntarily swallowing to localize this gland better.

Small variations in laryngeal musculature can affect voice quality and tone. The differences in voice quality are apparent between male and female larynxes. In males, testosterone thickens the vocal ligaments, causing deeper voice quality. The strength and fine control of the muscles is acquirable from use. Singers can gain improved fine motor control over their intrinsic muscles through years of practice to better modulate pitch. Though anatomic variations can exist in the musculature, cartilaginous variations are more frequent with the thyroid cartilage most commonly affected.[9]

Hoarseness is a frequent complaint following long surgeries or prolonged admissions to the ICU. Often, the patient’s hoarseness is related to trauma caused by the intubation. Risk factors for intubation-related laryngeal injury are prolonged intubation (greater than 36 hours), intubation without myorelaxant drugs, large endotracheal tubes, aspiration, and coexisting presence of a nasogastric tube.[11] Occasionally, vocal cord paralysis can occur due to the prolonged compression of the recurrent laryngeal nerve between the endotracheal tube balloon and the thyroid cartilage in the subglottis.

Because of its long course through the neck and mediastinum, the recurrent laryngeal nerve is subject to injury in cervical surgery (thyroid surgery, neck dissections, anterior cervical approach to the spine, etc.) and thoracic surgery (lung biopsy, aortic aneurysm repair, etc.). Surgical injury is the leading cause of unilateral vocal cord paralysis, followed by idiopathic and malignant causes.[12] Patients commonly present postoperatively with hoarseness that does not resolve over time.

Assessing laryngeal function and mobility is valuable for both the otolaryngologist and primary care physician. As an outpatient, primary care physicians can use laryngeal mirrors to visualize the larynx for basic screening purposes to investigate foreign bodies, masses, or inflammation. To better assess laryngeal function and visualize anatomy more intimately, an otolaryngologist or another trained practitioner can use a flexible laryngoscope. After the nasal administration of a topical anesthetic, the scope is passed through the nasopharynx as far as tolerated by the patient. Performing this well-tolerated procedure on an alert patient allows for outpatient visualization of the dynamic larynx. For most diagnostic visualization and biopsies, rigid laryngoscopy under sedation is necessary.[2]

Hoarseness and dysphagia can be the presenting symptoms of countless diseases. Trauma, stroke, malignancy, neuromuscular disorders, and psychiatric illness can cause combinations of these diseases. An appropriate differential can be generated based on demographics, exposures, and detailed history. 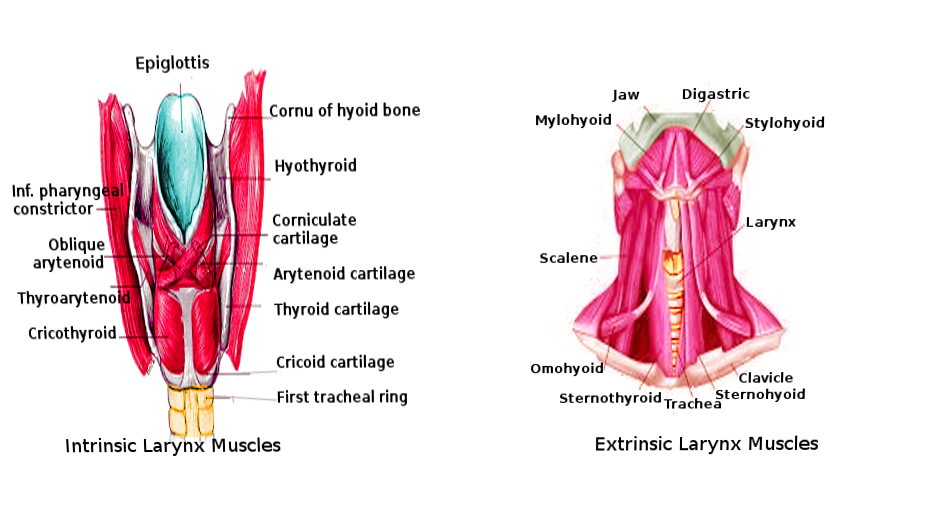 O'Rahilly R,Tucker JA, The early development of the larynx in staged human embryos. I. Embryos of the first five weeks (to stage 15). The Annals of otology, rhinology, and laryngology. 1973 Sep-Oct;     [PubMed PMID: 4746614]