The Koebner phenomenon (KP), first described in 1876 by Heinrich Koebner, is the appearance of new skin lesions on previously unaffected skin secondary to trauma.[1] This phenomenon is also termed the isomorphic (from Greek, “equal shape”) response, given the fact that the new lesions that appear are clinically and histologically identical to the patient’s underlying cutaneous disease.[2] In other words, a patient with psoriasis who exhibits koebnerization (and is said to be “Koebner-positive”) will develop new psoriasiform lesions along sites of skin injury even if trivial. KP can develop in any anatomic site, including in classic areas of psoriatic involvement and in regions that are usually spared, such as the face. The phenomenon shows dynamic behavior. Patients may be “Koebner-negative” at one point in life, but may later become “Koebner-positive.” [1]

The KP is not to be confused with pathergy, which is a term utilized to describe when minor trauma (including blunt trauma such as bumps and bruises) can induce skin lesions.[2] The lesions arising from pathergy tend to be non-specific papules or pustules that ultimately may develop into skin ulcers. Pathergy, which commonly presents in certain conditions such as pyoderma gangrenosum Sweet syndrome, and Bechet disease, is also used as a clinical test for diagnosis. The site where pathergy positivity has been elicited often exhibits a monocytic infiltrate on histopathology.[2] In contrast, the lesions arising from the Koebner phenomenon will reflect upon the underlying skin disease of the patient, such as psoriasis or vitiligo.

The underlying pathophysiology of this phenomenon remains unclear.[1][2] The current thought is that it is immune-mediated, involving cytokines and autoantigens, or disease-specific reactions, such as T-cell mediated reactions, keratinocyte proliferation, and angiogenesis in psoriasis.[2] Other theories suggest that it is a vascular process, as it appears the microvasculature in psoriatic patients exhibiting Koebnerization responds differently to trauma. Some believe that the papillary dermis must be involved to induce a Koebner response, suggesting injury to epidermal cells and dermal inflammation are both required. Other possible underlying mechanisms including enzymatic, neural, genetic, infectious, and hormonal, however, there is currently not sufficient evidence to support any one particular theory over another.[4]

Classification and Subtypes of the Koebner Phenomenon

The first group [category I] referred to as true koebnerization, includes psoriasis, lichen planus, and vitiligo. In these three conditions, KP is reproducible in all patients by a variety of insults. Boyd and Nelder argued that the term KP should be typically reserved for this group of diseases.

The second group [category II], referred to as pseudo-koebnerization, includes diseases such as molluscum contagiosum and verruca vulgaris, whereby KP gets produced by the seeding of infectious agents along with sites subjected to trauma, usually from scratching.

The third group [category IIII],  occasional lesions, includes diseases such as Darier disease and erythema multiforme, which meet some criteria for KP but not all. Finally, the fourth group [category IV], questionable trauma-induced process, includes all disorders that have a dubious association with trauma such as pemphigus vulgaris and lupus erythematosus.

Since this publication in 1990, other conditions have demonstrated the Koebner phenomenon, such as leukocytoclastic vasculitis, mycosis fungoides, and eruptive xanthomas, among others mentioned in this article.[7][8][9][8][7]

Different types of cutaneous injury may trigger this phenomenon, including excoriations, tattoos, friction, trauma, surgical instrumentation, burns, and ultraviolet or irradiation.[1][2] (Table 2) KP exhibits an “all or nothing” pattern of reactivity, where a patient who reacts to one traumatic stimulus is likely to react to all stimuli, and a patient who does not react to a traumatic stimulus is likely to be non-reactive to all other stimuli as well.[10][11] The severity of the response varies, as well. Severity can be classified into four grades as follows: none, abortive (lesions vanish spontaneously after approximately two weeks), minimal (focal lesions around the area of trauma), maximal (wide-spread lesions).[2]

Time from skin insult to the appearance of new skin lesions varies. In psoriasis, new lesions typically arise within 10 to 20 days after a skin injury; however, this ranges anywhere from 3 days to 20 years.[2] The latent period between traumatic insult to the uninvolved skin and Boyd and Nelder considered the appearance of new lesions to be 10 to 14 days on average, although the variability of the duration has been suggested by Koebner to range from just three days to up to several years.[4][12] This wide range suggests the varying degree of sensitivity for the development of KP, which may be a unique characteristic of the patient's skin, and/or the underlying disease process. Moreover, diseases such as vitiligo and psoriasis typically have a waxing-waning course and may develop over different intervals after several simultaneous insults in the same patient.[1]

The Koebner phenomenon is typically associated with preexisting skin disease. Clinical entities that commonly display the Koebner phenomenon include psoriasis, vitiligo, lichen planus.[1] The incidence of Koebnerization ranges broadly within these entities; estimates of the prevalence of KP are approximately 11 to 75% in psoriasis and 21 to 62% in vitiligo.[4][13]

Koebnerization may have a significant impact on patients with psoriasis, as any insult to their skin, including tattoos and injections, can cause their disease to flare.[1] One study found that a significant number of patients surveyed had developed psoriasis within a few weeks following the tattooing process.[14] A minority had psoriasis limited to the tattoo site, but a larger subset of patients exhibited generalized psoriasis after tattooing.[14] Because the Koebner phenomenon is not a unique disease process, but rather activation of underlying cutaneous disease, the management of lesions arising from Koebnerization is dependent on the management of the primary disease. Relative to vitiligo, studies have found that the affected body surface area (BSA) is significantly higher when Koebnerization is present.[15] The presence of Koebnerization in vitiligo also appears to correlate with higher disease activity within the past 12 months. Lower response to treatment also appears to occur in vitiligo patients who exhibited Koebnerization. This study concluded that Koebnerization might function as a clinical indicator of disease activity in vitiligo, as well as serve as a predictor of treatment response.[15]

The Koebner phenomenon is something that dermatologists will often test for as part of a complete physical exam. However, by the time a patient reaches a dermatologist, it is almost certain that they received a referral from other providers because they have an underlying cutaneous disease. As a result, awareness of the Koebner phenomenon by other health professionals is likely to help patients in faster time to diagnosis and referral.

Primary care providers and emergency medicine physicians may often be the first group of health care professionals to encounter a patient with cutaneous disease. It may be helpful for these specialties to incorporate testing for Koebnerization (with a scratch test) into their physical exam to aid in building their differential diagnosis. Additionally, nurses may be the first to notice when minimal trauma induces a cutaneous response in a patient (i.e., a patient develops psoriasiform plaques along venipuncture sites or tape lines). Nurses may thus help the interprofessional team by reporting such findings.[Level V]

Figure 1. True Koebner phenomenon: (A) In a patient with chronic plaque psoriasis. Appreciate the 'kissing' lesions of psoriasis developing along the natal cleft stemming from trivial friction-induced trauma; (B) In a patient with vitiligo vulgaris. Appreciate the linear depigmented macule over the back of patient (black arrow) with active vitiligo, which developed within a week of the patient having sustained a mild abrasion along that line; and (C) In lichen planus involving the neck fold of an adult man - Dermoscopic image highlighting the linearly arranged Wickham's striae (white structureless areas) for better clarity [Escope Videodermatoscope; 70X, polarized; Timpac Healthcare Pvt. Ltd.].
Contributed by Sidharth SOnthalia, MD, DNB, MNAMS

Figure 2 Pseudokoebnerization: (A) Of flat warts in the threading area of a young lady; and (B) Ofmolluscum contagiosum (MC) lesions in an immunosuppressed patient. Appreciate the florid lesions of genital MC and evidence of linear clusters at multiple places. One area (yellow circle) has been magnified in the inset for better appreciation. visible as clustered papules (black circle). In these cases, micro-inoculation or seeding of the viral particles is responsible for this kind of Koebner phenomenon.
Contributed by Sidharth Sonthalia, MD, DNB, MNAMS 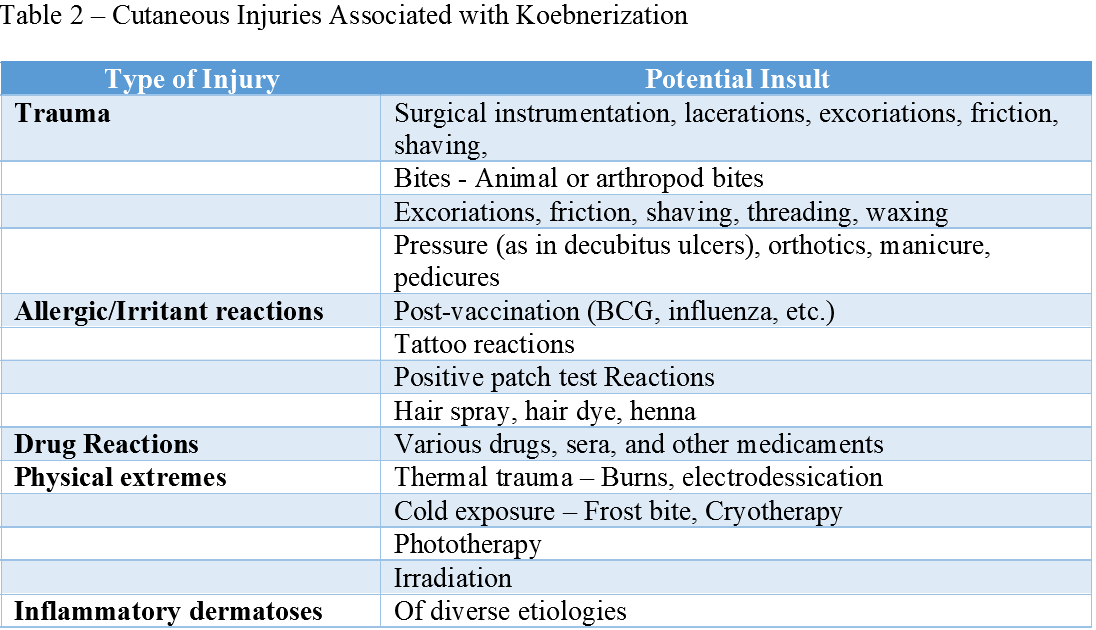 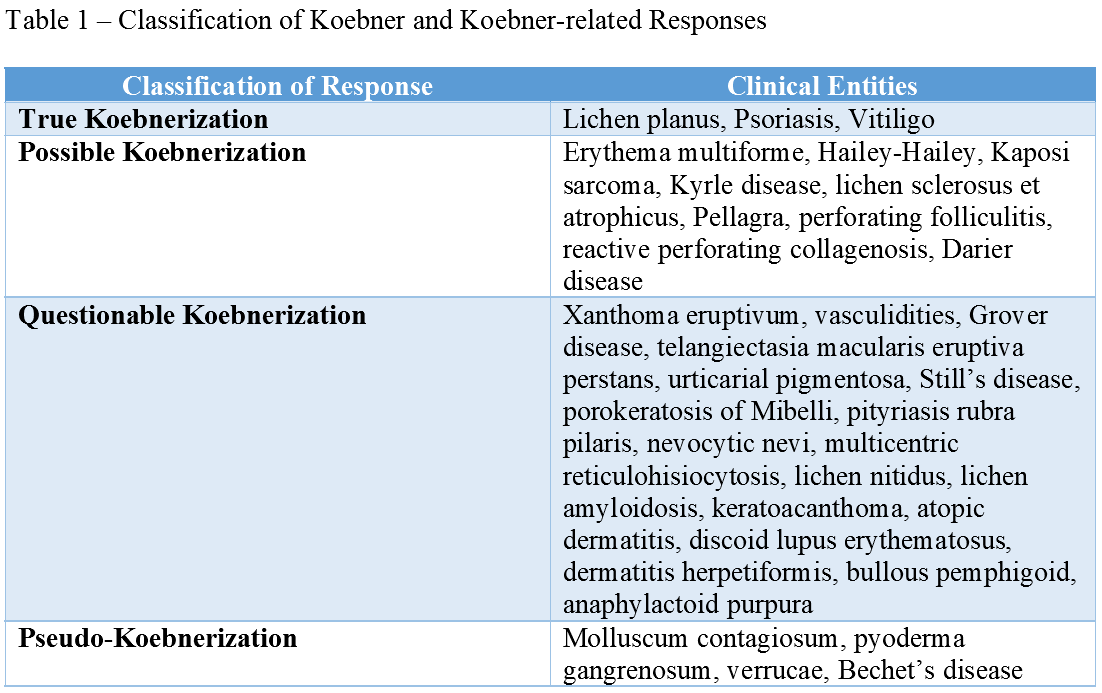