Kaposi sarcoma is an interesting soft tissue tumor occurring in several distinct populations with a variety of presentations and courses. In its most well-known form, Kaposi sarcoma occurs in patients with immunosuppression, such as those with acquired immunodeficiency syndrome (AIDs) or those undergoing immunosuppression due to an organ transplant. This activity reviews the cause, presentation and pathophysiology of kaposi sarcoma and highlights the role of the interprofessional team in its management.

Kaposi sarcoma is an interesting soft tissue tumor occurring in several distinct populations with a variety of presentations and courses. In its most well-known form, Kaposi sarcoma occurs in patients with immunosuppression, such as those with acquired immunodeficiency syndrome (AIDs) or those undergoing immunosuppression due to an organ transplant. Initially described in 1872 by Moritz Kaposi, an Austro-Hungarian dermatologist in 5 patients with the multifocal disease,[1] human herpesvirus/Kaposi sarcoma herpesvirus (HHV-8) was discovered as a causative agent of Kaposi sarcoma as the AIDS epidemic progressed in the 1980s.[2] Four clinical forms emerged.

Each form has a differing natural history ranging from indolent to more aggressive and fatal in anaplastic varieties.[3]

Human herpesvirus-8 (HHV-8) is present in all forms of Kaposi sarcoma.[4] HHV-8 interferes with many normal cell functions and requires cofactors like cytokines or specific proteins to result in the development of Kaposi sarcoma.[5] Other malignancies associated with HHV-8 include plasmablastic multicentric Castleman disease, primary effusion lymphoma, intravascular large B cell lymphoma, and occasionally angiosarcoma and inflammatory myofibroblastic tumor.[5]

Classic Kaposi sarcoma has a male: female ratio 17:1 and occurs primarily in patients over 50 years old of Eastern European and Mediterranean descent. These patients are at greater risk for secondary malignancies.[6][7]  The prevalence mirrors the distribution of HHV-8 throughout the world.[8] Within the United States, incidence has been stable around 1:100,000 since 1997.[9]

Endemic Kaposi sarcoma has the unusual predilection for the pediatric population and mirrors HHV-8 seropositivity.[6] The rates of seropositivity in pediatric patients vary extensively throughout Africa, from a low of 2% in Eritrea to almost 100% in the Central African Republic.[10] Following the HIV epidemic in Africa, the ratio of men to women with Kaposi sarcoma has fallen from 7:1 to 2:1.[11] Endemic Kaposi sarcoma is now the most common cancer in men and the second most common cancer in women with Uganda and Zimbabwe.[11]

HHV-8 seropositivity worldwide varies, with a high of 40% in Saharan Africa to 2% to 4% in Northern Europe, Southeast Asia, and Caribbean countries. Approximately 10% of Mediterranean countries and 5-20% of United States patients are seropositive for HHV-8.[12][13] This unique predilection for sub-Saharan African, the Mediterranean, and South America is unique to HHV-8 amongst human herpesviruses.[14]

AIDS-related Kaposi sarcoma is the second most common tumor in HIV patients with CD4 counts less than 200 cells/mm3 and is an AIDs-defining illness.[15] Up to 30% of HIV patients not taking high-activity antiretroviral therapy (HAART) will develop Kaposi sarcoma. HIV positive male homosexuals have a 5- to 10-fold increased the risk of Kaposi sarcoma.[16][6]

Due to HHV-8 co-evolving with the human population for centuries, cofactors of immune defects and inflammation are required for the development of malignancy.[14] It is transmitted primarily via saliva in childhood and sexually, with some cases of infection via blood transfusion or intravenous drug use.[14] Seropositive family members will often infect other family members, particularly in areas where HHV-8 is endemic.[14][6]

After infecting endothelial cells, HHV-8 activates the mTOR pathway, alters the cells to have mesenchymal differentiation, and promotes aberrant angiogenesis [14]. Through immune suppression and inflammation, the HHV-8 infected cells can persist and proliferate. Expression of latency-associated nuclear antigen (LANA) causes binding of p53 and suppression of apoptosis [14][19]. LANA also maintains the viral episome and prevents Fas-induced programmed cell death.[19] NF-kB is activated by HHV-8 and up-regulates cytokine expression. Up-regulation of VEGF and bFGF results in neo-angiogenesis [19]. It induces c-kit expression and produces the spindled morphology of Kaposi sarcoma cells from their original cuboidal monolayer.[19] Matrix metalloproteinases are upregulated by HHV-8.[19]

Interestingly, Kaposi sarcoma is not monoclonal and different nodules within a patient have different clonal origins.[14]

Clinically, Kaposi sarcoma is a vascular lesion, and as such, often presents as a violaceous pink to purple plaque on the skin or mucocutaneous surfaces. Lesions may be painful with associated lymphedema and secondary infection.[6][19] There are 3 major stages on the skin: patch, plaque, and nodule.[20] Lesions may ulcerate or invade into nearby tissues.[20] In addition to involving lymph nodes, Kaposi sarcoma has a predilection for the lungs and gastrointestinal system, but can also occur in other visceral organs.[20] Respiratory involvement can be associated with death due Kaposi sarcoma.[19]

Advancement to the plaque stage of Kaposi sarcoma has an increasing prominence of the features seen in the patch stage with extension into the subcutis, and more prominence of the hyaline globules intra- and extra-cellularly.[20][3] These hyaline globules are periodic acid-Schiff positive and demonstrate Weibel-Palade bodies by electron microscopy.[20] Cellular pleomorphism is minimal, and there are few mitotic figures.[20][3]

As Kaposi sarcoma develops into the nodular form, the pleomorphism increases and mitotic figures become more prominent [3]. The slit-like lumens are enhanced as well.[20][3]

The presence of HHV-8 can be confirmed with immunohistochemistry for LANA1.[14]

A general history and physical are performed first. The skin is examined for purplish lesions or lymph node enlargement that may signal the presence of Kaposi sarcoma. Suspicious lesions on the skin or lymph nodes can be biopsied and sent to pathology for evaluation. Particular care and attention should be paid to mucocutaneous surfaces as it is a common presenting location.

For a definitive diagnosis of Kaposi sarcoma, they must perform a biopsy or excision of the suspicious areas. A pathologist examines the tissue under the microscope and looks for the characteristic features: a spindle cell vascular proliferation in the dermis.[20][3] Immunohistochemistry positivity for LANA1 (a surrogate marker for HHV-8) helps to differentiate Kaposi sarcoma from similar lesions. The lesional cells also express CD34, factor VIII, PECAM-1, D2-40, VEGFR-3, and BCL-2.[20]

Skin involvement of Kaposi sarcoma is treated by local excision, liquid nitrogen, and injection of vincristine.[19][6] Chemotherapy is a mainstay of treatment for endemic and systemic forms, in particular in children.[6][9]

Histologically, spindle cell vascular lesions in the skin include a differential diagnosis of[20][3]:

The differential diagnosis of Kaposi sarcoma on mucocutaneous surfaces includes[6]:

High-activity antiretroviral therapy (HAART) is the mainstay of treatment in patients with AIDS-related Kaposi sarcoma. Not only does HAART treatment reduce the risk of development of Kaposi sarcoma, but it also can lead to spontaneous regression of the tumors.[21][22]

For local disease, sclerotherapy, intralesional vinca-alkaloids, bleomycin, interferon-alpha, topical alitretinoin, or imiquimod cream have all been used with success.[6]

Systemic chemotherapy approved for treatment of Kaposi sarcoma includes liposomal anthracyclins, paclitaxel, etoposide, vincristine, vinblastine, vinorelbine, bleomycin, or a combination of doxorubicin, bleomycin, and vincristine.[19][6] Others have used interferon-alpha 2b with success.[6] Other therapies tried to include thalidomide, VEGF inhibitors, tyrosine kinase inhibitors, and matrix metalloproteinases but further research into these as single agents is still being conducted.[6][24]

Kaposi sarcoma is not usually staged, however, a staging system was initially developed in the 1980s for HIV-related Kaposi sarcoma by the AIDS Clinical Trials Group.[26][13] With modern HAART, there are 2 proposed risk categories: good and poor.[26] Poor prognosis was based on poor tumor stage and poor systemic disease status.[26]

Larger lesions can be painful and lead to edema and disfigurement of the skin. Pulmonary involvement of Kaposi sarcoma can cause respiratory distress and lead to death. Classic Kaposi sarcoma has a known association with the development of a secondary malignancy.

Chemotherapy is not without side effects, including but not limited to neurotoxicity, infertility, cardiac toxicity, and nerve pain.

Radiation therapy can lead to drying of the skin, avascularity, poor healing, development of additional malignancies, and lymphedema.

Patients should be followed closely for resolution or recurrence of their disease.

Kaposi sarcoma has been definitively linked to HHV-8 infection with increased incidence in patients with HIV infection, immunosuppression, or of Eastern European or Mediterranean descent. In seropositive patients at high risk of development of Kaposi sarcoma, the primary care team should take care to perform thorough skin exams looking for the characteristic violaceous patches and plaques. Additionally, patients in these high-risk groups should be counseled to examine their skin as well for lesions. Discovery of any suspicious lesions should prompt expedient biopsy and examination by a pathologist. Patient care is enhanced by the submitting provider providing a complete clinical history and mentioning the suspicion for Kaposi sarcoma to the reviewing pathologist.

Patients who are diagnosed with Kaposi sarcoma should be closely monitored for disease regression or recurrence and need for radiation treatment or systemic chemotherapy. If the HIV-associated or iatrogenic form, the clinical team should communicate and work closely to begin HAART or help reduce the immunosuppression while treating the patients underlying condition. (Level I)

Dentists and oral health care providers should be educated about the clinical presentation in the oral cavity as this a common location. 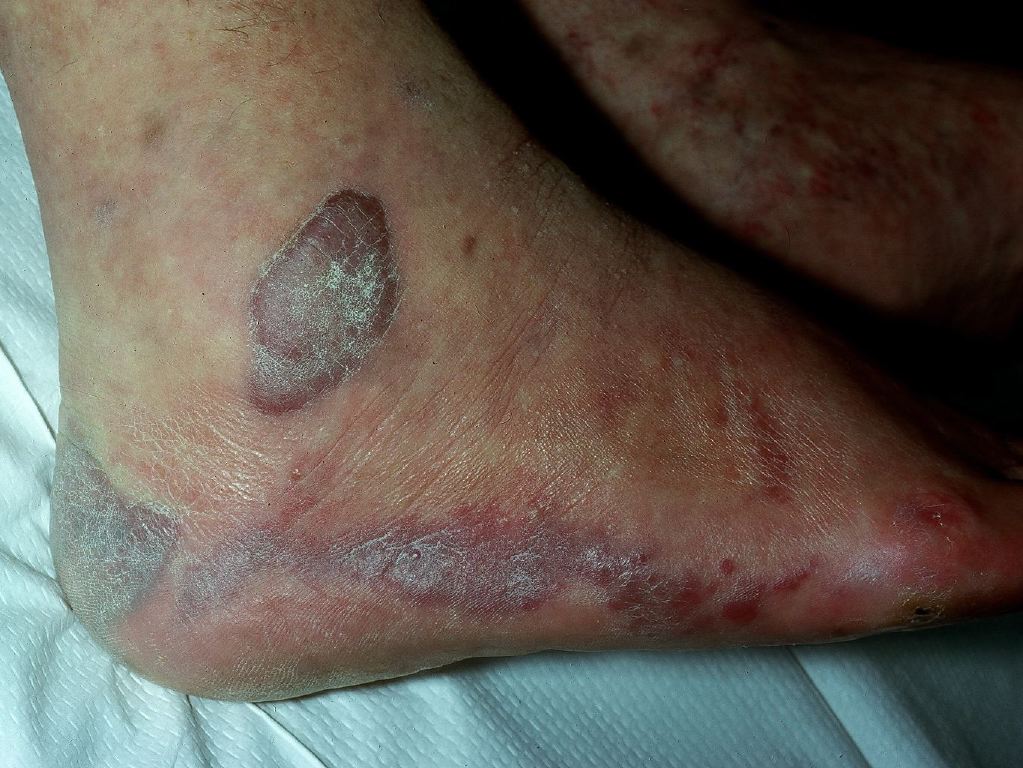 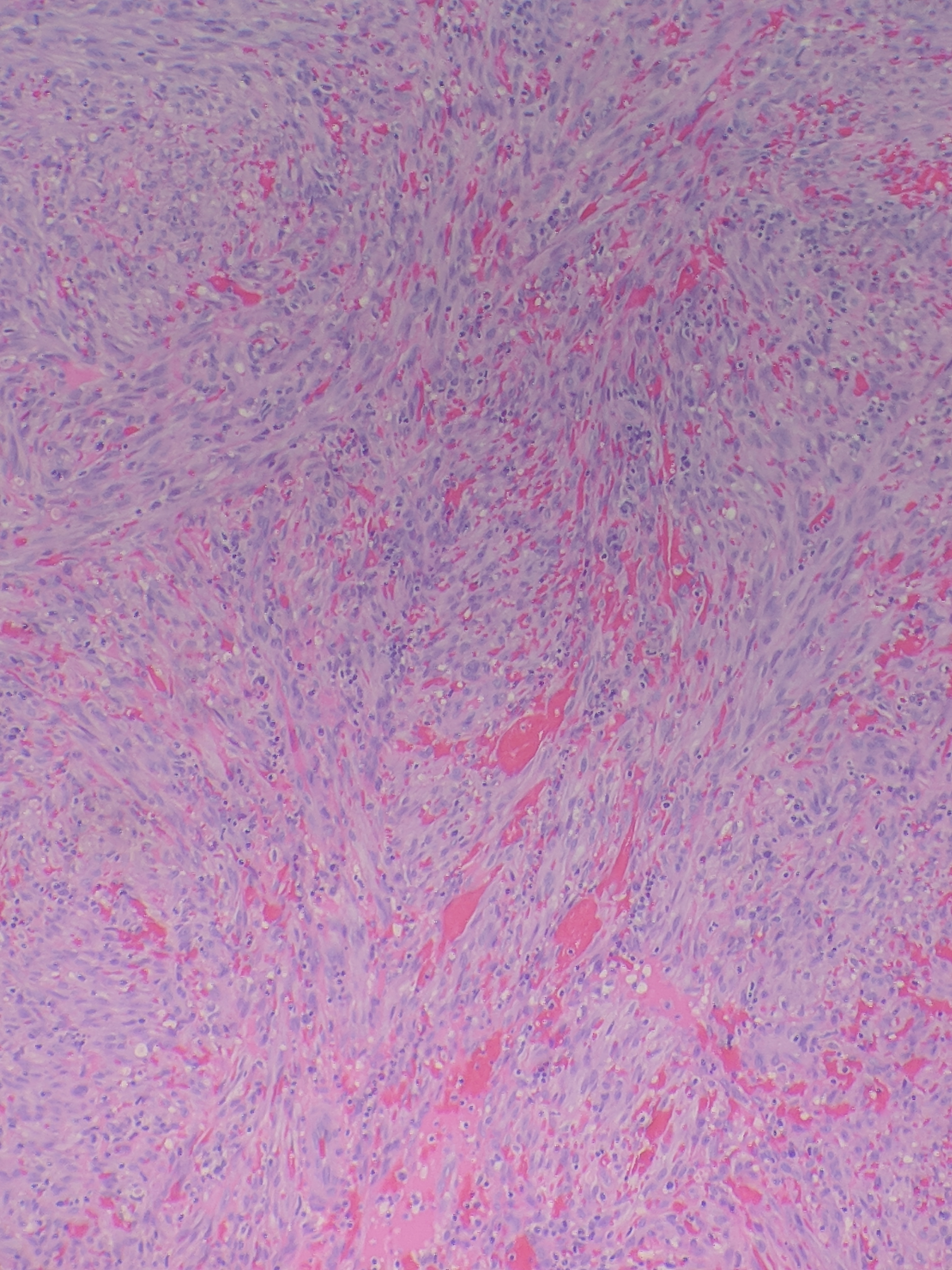 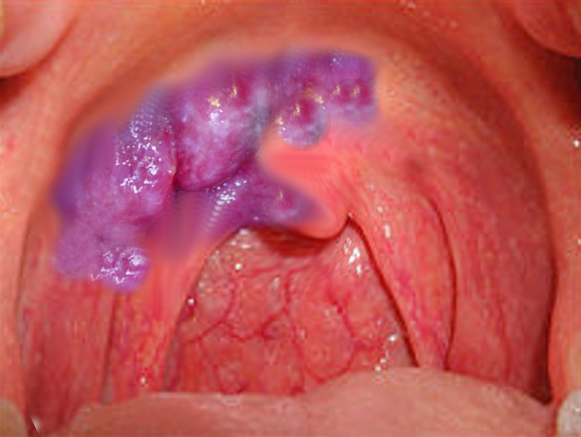