The interossei muscles are intrinsic muscles of the hand located between the metacarpals. They consist of four (or three) palmar and four dorsal muscles that, respectively. These muscles are responsible for finger adduction and abduction. Synchronously, the palmar and dorsal interossei assist in flexion of the metacarpophalangeal joints and extension of the interphalangeal joints. All interossei muscles receive innervation from the deep ulnar branch of the ulnar nerve. Therefore, any injury to the ulnar nerve may have debilitating implications on specific intrinsic hand muscle functions, including finger abduction and adduction, which is primarily controlled by the interossei muscles.

The palmar interossei are unipennate muscles that originate from the metacarpals of the respective digit to which they are associated. These muscles adduct the first, second, fourth, and fifth digits about a long axis through the third digit. Adduction occurs at the metacarpophalangeal joints. Additionally, the palmar interossei contribute to flexion at the metacarpophalangeal joints and extension at the proximal interphalangeal (PIP) and distal interphalangeal (DIP) joints of their respective digits.

Of all the intrinsic muscles of the hand, the dorsal interossei are the most dorsally located. The bipennate dorsal interossei are the major abductors of the second, third, and fourth digits at the metacarpophalangeal joints. Moreover, they also contribute to flexion at the metacarpophalangeal joints, in addition to the extension of the PIP and DIP joints.

Upon completion of the fourth week of embryonic development, four limb buds arise from somites and mesenchyme of the lateral plate mesoderm that is covered by a layer of ectoderm.[4][5] Development of the upper extremities is propagated by a plethora of protein factors, with fibroblast growth factors (FGF) and Sonic hedgehog (Shh) playing vital roles. The gene expression and subsequent interactions of these various proteins contribute to the development of three spatial limb axes: proximodistal, anteroposterior, and dorsoventral.[4][5]

Development of the hand begins with flattening of the distal upper extremity buds around days 34-38 of embryonic development. Somites form the limb musculature while mesenchyme of the lateral plate mesoderm forms bone and cartilage. Somitic mesoderm of the hand divides into superficial and deep layers. Both palmar and dorsal interossei muscles develop from the deep layer of this mesoderm. By the twelfth week of development, tendons are fully developed and functional.[5]

Lymphatic drainage of the upper limbs is divided into superficial and deep lymphatic drainage. Lymphatic plexuses of the skin of the palm and dorsum of the hand ascend with the cephalic and basilic veins towards the axillary and cubital lymph nodes, respectively. Deep lymphatic vessels follow the primary deep veins and eventually terminate in the humeral lymph nodes.

Compartment syndromes of hand interossei are uncommon and are difficult to diagnose due to their atypical presentations.[8] One case study found a first dorsal interosseous compartment syndrome in a teacher, likely through overuse injury due to writing. This injury went undiagnosed for eight years but was ameliorated through a simple fasciotomy.[8] Another case report found a first dorsal interosseous compartment syndrome in a young, healthy male, also due to overuse injury. The authors measured the compartment pressure at rest and after activity and found a rise in pressure from 12 mmHg to 60 mmHg after 10 minutes of hand exercise.[9] This rise in pressure coincided with the patient's hand pain and swelling. After unsuccessful oral pain management, fasciotomy was performed with a subsequent resolution of the patient's symptoms.[9]

Both palmar and dorsal interossei receive innervation from the deep palmar branch of the ulnar nerve. As such, injury to the ulnar nerve can manifest as weakness or even atrophy of the interossei muscles and is typically caused by nerve root impingement, brachial plexus compression, or nerve entrapment at the elbow, forearm, or wrist. Ulnar nerve entrapment has been determined to be the second most common presenting compression neuropathy in patients.[10] Depending on which nerve fibers are compromised, patients may have weakness in abduction or adduction of the fingers. The lumbricals are the primary contributors to flexion at the metacarpophalangeal joints as well as extension at the DIP and PIP joints; however, the interossei also play a minor role in these movements. A late manifestation of ulnar nerve injury, the ulnar claw hand deformity is caused by weakness of the third and fourth lumbricals, in addition to the interossei, which manifests as an extension of the fourth and fifth metacarpophalangeal joints and flexion of the fourth and fifth PIP and DIP joints at rest.[10]

Several clinical examinations can be used to assess the integrity of ulnar nerve function. In a positive Wartenberg’s sign, patients are instructed to adduct all fingers. A positive test will produce abduction of the fifth finger relative to all other digits, implying weakness of the third palmar interosseous muscle and fourth lumbrical.[10] To examine the palmar interossei, a patient can be instructed to hold a sheet of paper between any of the second through fifth digits, with dropping of the piece of paper indicating palmar interossei weakness. Furthermore, clinicians can evaluate the dorsal interossei by instruction a patient to abduct their second through fifth digits against the clinician’s resistance.[10] 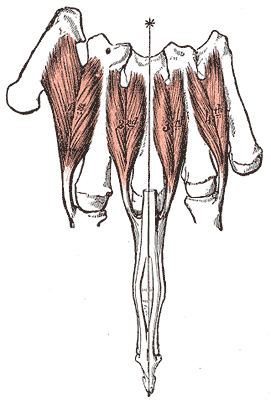