Hashimoto thyroiditis, also known as chronic autoimmune thyroiditis and chronic lymphocytic thyroiditis, is an autoimmune disease in which thyroid cells are destroyed via cell and antibody-mediated immune processes. It is the most common cause of hypothyroidism in developed countries. In contrast, the most common cause of hypothyroidism worldwide is an inadequate dietary intake of iodine. The pathophysiology of Hashimoto thyroiditis involves the formation of antithyroid antibodies that attack the thyroid tissue, causing progressive fibrosis. The diagnosis can be challenging, and consequently, the condition is sometimes not diagnosed until late in the disease process. The most common laboratory findings demonstrate elevated thyroid-stimulating hormone (TSH) and low thyroxine (T4) levels, coupled with increased antithyroid peroxidase (anti-TPO) antibodies. This activity reviews the pathophysiology, diagnosis, and management of Hashimoto thyroiditis and highlights the role of the interprofessional team in caring for patients with this condition.

Integrative and functional medicine practitioners may also assess free T3 and reverse T3 levels, however, Western medicine does not use this approach.

The standard dose is 1.6 - 1.8 mcg/kg per day, but it can vary from one patient to another. Patients less than 50 years old should be commenced on a standard full dose; however, lower doses should be used in patients with cardiovascular diseases and the elderly. In patients older than 50 years, the recommended starting dose is 25 mcg/day with reevaluation in six to eight weeks. In contrast, in pregnancy, the dose of thyroxine needs to be increased by 30%, and in patients with short-bowel syndrome, increased doses of levothyroxine are needed to maintain a euthyroid state.

There is less evidence to support an autoimmune/anti-inflammatory diet. The theory behind the inflammation has to do with the leaky gut syndrome, where there is an insult to the gut mucosa, which allows the penetrance of proteins that do not typically enter the bloodstream via transporters in the gut mucosa. It is theorized that a response similar to molecular mimicry occurs, and antibodies are produced against the antigens. Unfortunately, the antigen may be very structurally similar to thyroid peroxidase, leading to antibody formation against this enzyme. The concept of an autoimmune diet is based on healing the gut and decreasing the severity of the autoimmune response. More research is required on this topic before it becomes a part of the guidelines.

Thyrogastric syndrome was first described in the 1960s when thyroid autoantibodies were found in a subset of patients with pernicious anemia and atrophic gastritis. The latest guidelines have incorporated the two aforementioned autoimmune disorders into a syndrome, now known as a polyglandular autoimmune syndrome (PAS). This is characterized by two or more endocrine and nonendocrine disorders. The thyroid gland develops from the primitive gut, and therefore the thyroid follicular cells share similar characteristics with parietal cells of the same endodermal origin. For example, both are polarized and have apical microvilli with enzymatic activity, and both can concentrate and transport iodine across the cell membrane via the sodium/iodide symporter. Iodine not only plays an essential role in the production of thyroid hormone but it is also involved in the regulation of gastric mucosal cell proliferation and acts as an electron donor in the presence of gastric peroxidase and assists in the removal of free oxygen radicals.

It is important to note that due to the pharmaceutical formation of thyroxine available worldwide, there can be problems with absorption in patients with disorders of the gastric mucosa. Most levothyroxine is obtained by salification with sodium hydroxide, making sodium levothyroxine. The absorption of T4 occurs in all areas of the small intestine and ranges from 62% to 84% of the ingested dose. Decreased gastric acid secretion can disrupt this percentage and may cause issues with decreased absorption of most pharmaceutical grade forms of levothyroxine, except for liquid-based or soft gel formations. 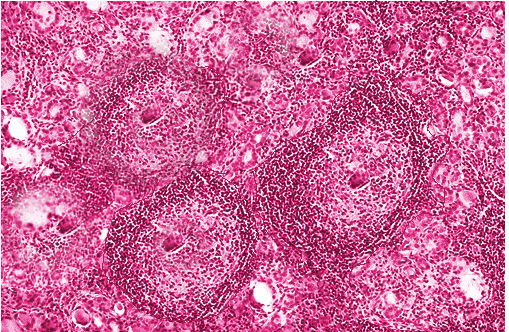