Glycogen, the principal storage form of glucose and primary source of non-oxidative glucose for skeletal muscle and liver, confers significant contributions via its degradation by maintaining normal blood glucose levels and providing fuel for muscle contraction. In terms of cytosolic degradation, the major enzymes participating in glycogen breakdown constitute glycogen phosphorylase and debranching enzyme. Glycogen phosphorylase takes care of breaking down linear chain bonds, whereas debranching enzyme transfers glucose residues to the linear chain as to degrade branches. Both enzymes work in skeletal muscle and liver. Because skeletal muscle can utilize the phosphorylated form of glucose as fuel, it does not require glucose-6-phosphatase.

On the other hand, the liver requires glucose-6-phosphatase to dephosphorylate glucose and export glucose outside the cell. In terms of lysosomal degradation, acid alpha-glucosidase is responsible for glycogenolysis. Deficiency in any of these enzymes manifests as unique disease states. Most cytosolic degradations alterations effectuate in glycogen storage diseases, including von Gierke disease, Cori disease, and Hers disease. A defect in lysosomal degradation can lead to Pompe disease. The impaired role of glycogenolysis in neural functioning appears via the presentation of Lafora disease. Detection of glycogenolysis alterations can be done mainly through DNA analysis and electron microscopy through the liver and skeletal muscle biopsies.

Glycogen exists from precursors of glucose, derived from recently ingested carbohydrates or gluconeogenic precursors, including lactate and alanine. Glycogenolysis is simply the process involved in the degradation of glycogen for utilization as an energy source mainly in skeletal muscle and liver. Glycogen degradation occurs in two distinct pathways depending on location. Concerning skeletal muscle, glycogen degradation leads to glucose-1-phosphate, and muscle uses it, per se, as fuel for contraction. Glycogenolysis in skeletal muscle occurs under conditions of physical activity. On the other hand, liver glycogenolysis generates glucose for export to the bloodstream. The stimulus for liver glycogenolysis is nutritional deprivation, with a corresponding increase in hormones such as glucagon.[1]

Due to the vital role that glycogen breakdown has on normal physiology, including maintaining blood glucose levels and muscle contraction during activity, disruptions in glycogenolysis have exhibited pathophysiological conditions. Although researchers have investigated the role of glycogen, certain information is not well understood. For instance, the specific role that glycogen serves in muscle contraction or the method for glycogen transport into lysosomes is unclear.

Glycogenolysis, the breakdown of glycogen, occurs in two cellular locations: cytosol and lysosome. Different enzymes perform glycogen degradation in these cellular locations. Upon glycogen degradation, glucose or glucose-1-phosphate serves as fuel. In skeletal muscle, glucose uptake gets mediated via GLUT1 (lying on the plasma membrane) and GLUT4 (lying inside intracellular storage vesicles) transporters. In the cytosol, glycogen phosphorylase becomes strongly activated by AMP for muscle tissue. For liver, glucagon activates glycogen phosphorylase via an increase in cyclic-AMP. Glycogen degradation in lysosomes undergoes mediation via acid alpha-glucosidase via autophagic vacuoles that engulf a portion of the cytoplasm and fuse with organelles to enclose the content. The specific mechanisms get a further explanation in later sections.[2]

Glycogen is the branched polymer of glucose. Glucose is stored in cells as polymers to increase solubility, occupy less space, and allow for rapid mobilization. The glycogen store in a hepatocyte corresponds to an estimated glucose concentration of 400mM. Conversely, the contribution of insoluble glycogen to the cytosol osmolarity is 40 million times smaller than the contribution of 40mM glucose. Therefore, if the glycogen polymer form did not exist, the cytosol osmolarity would be sufficiently high to cause water penetration into the cell via osmosis and result in cell lysis. Glycogen leads to higher solubility, mainly due to its formation of branches. On the other hand, most of the polymer forms by alpha 1-4 glycosidic bonds, which get organized in chains, branching occurs every 4-8 glucose monomers via alpha 1-6 glycosidic bonds. This arrangement leads to the classical organization of glycogen, called the beta-particle, with a self-glycosylating protein called glycogenin in the core.[3]

It is essential to understand the conformation of glycogen because glycogenolysis involves the disintegration of this polymer into glucose monomers via distinct enzymes that catalyze the breakdown of glycogen's branches and chains.

Glycogen degradation occurs during a fasting state or when there is a low ratio of insulin to glucagon. The primary energy reserves for the body are glycogen and lipids. Whereas lipids result in a higher number of ATP molecules after oxidation, glycogenolysis leads to a lower number of ATP molecules. However, two significant advantages exist for the metabolism of glycogen. The first advantage corresponds to the rapid mobilization of glycogen for metabolic requirements. Rapid mobilization is possible since glycogenolysis enzymes can adhere to the numerous branches of glycogen and begin simultaneous hydrolysis. The second advantage entails energy production under conditions of low lipid deposits, such as with anorexia.[3]

Glycogen levels are quantitively more present in skeletal muscle than the liver. Nevertheless, glycogenolysis serves important roles in both tissues. In the liver, glycogen metabolism has a vital role during fasting conditions, leading to hepatic glucose production for maintaining healthy blood glucose levels and supporting the fuel needs of other tissues. The full manifestation of glycogen in skeletal muscle, on the other hand, indicates the critical function that glycogen plays in skeletal muscle in terms of rapid ATP generation. A close relationship exists between glycogen storage in skeletal muscle and fatigue resistance. The ability of a muscle to exercise during the first 30 minutes of activity, despite the abundance of other energy sources such as lipids, is severely compromised when glycogen levels become diminished in skeletal muscle. Glycogen depletion has shown to develop fatigue because the muscle is unable to provide adequate fuel to skeletal muscle for excitation and contraction. A probable reason revolves around the role of glycogen in calcium release from the sarcoplasmic reticulum.[4][5]

Corresponding to cytosolic degradation, glycogen phosphorylase, the rate-limiting enzyme of glycogenolysis, cleaves terminal glucose residue connected to a glycogen branch while substituting a phosphoryl group for the alpha 1-4 bond. Four residues before an alpha 1-6 bond, corresponding to a branch, glycogen debranching enzyme catalyzes the transfer of three of the four remaining glucose residues to the end of another glycogen chain, where they can again by degraded by glycogen phosphorylase. In other words, the breakage of alpha 1-4 glycosidic bonds present in linear chains is catalyzed by glycogen phosphorylase, and the addition of the phosphate group to position one results in the production of glucose-1-phosphate. The activity of glycogen phosphorylase is modulated allosterically and by phosphorylation. Glycogen production, conversely, inhibits glycogen degradation. Phosphoglucomutase is then in charge of converting glucose-1-phosphate to glucose-6-phosphate through an isomerization reaction that has no energy requirements. On the other hand, the debranching enzyme deals with alpha 1-6 bonds and transfers a branch to the end of the polymer so that glycogen phosphorylase can continue working with it. In most tissues, glucose-6-phosphate is internally utilized for glycolysis and energy production through conversion to pyruvate, acting as a critical metabolic intermediate for other pathways, including the TCA cycle, fatty acid synthesis, Cori cycle, and alanine cycle. Nevertheless, in gluconeogenic organs such as the liver, kidney, and intestines, glucose-6-phosphate needs to be dephosphorylated to glucose—with the aid of enzyme glucose-6-phosphatase— so that it can undergo transport from the ER to the interstitial space. Corresponding the lysosomal glycogen degradation, the primary enzyme involved in acid maltase. The hydrolysis of glycogen to glucose, catalyzed by acid alpha-glucosidase, has been hypothesized to serve a protective mechanism for the liver from high concentrations of glycogen. Of the total amount of glycogenolysis that happens in skeletal muscle, only 5% of glycogen degradation happens in lysosomes. For liver glycogenolysis, only 10% occurs in lysosomes.[6][5][7]

Visualization of glycogen molecules cannot be done through light microscopy but instead requires the implementation of electron microscopy. Histological staining and implementation of light microscopy would only allow for visualization of conglomerates of glycogen particles. Molecules of glycogen, per se, require electron microscopy. Depending on the tissue sample gathered, glycogen has s been described as rosette-like beta particles or larger alpha particles. Rosette-like beta particles are found on muscle, whereas the alpha particles, which are simply aggregates of beta particles, are found in the liver. Beta particles correspond to the typical configuration of glycogen with average chain lengths of 13 residues consisting of inner chains with branch points and outer chains without branch points. The method integrated for histological staining is Period Acid Schiff. However, certain disadvantages of this method exist, including lack of specificity and general incompatibility with immunofluorescence techniques. Therefore, a novel method for the detection of glycogen in cells is now available where a renewable, recombinant protein containing carbohydrate-binding module from starch-binding domain protein 1 (Stbd1) is subsequently employed to perform an enzyme-linked immunosorbent assay.[1][8]

A disruption in glycogenolysis can result in glycogen storage diseases such as von Gierke disease, the most common GSD. Type I GSD effectuates due to a deficiency in glucose-6-phosphatase, responsible for dephosphorylating glucose-6-phosphate so that glucose can get transported outside the cell for the regulation of blood glucose levels and fuel usage in other tissues outside of the liver. The impaired ability to generate glucose from glycogenolysis results in severe hypoglycemia, hyperuricemia, and increased levels of lactic acid and triglycerides. Due to the deposition of fat, patients present with a rounded doll-like face. Without treatment, failure to thrive, hepatomegaly, abnormal swelling, and delayed motor development has been evident in patients with this disease. Long term complications can develop due to kidney glycogen accumulation leading to nephropathy, chronic kidney disease, and renal cancer. The main form of treatment for von Gierke disease patients is to maintain normal glucose levels while avoiding hypoglycemia by having frequent feeds.[5][10]

While degradation of glycogen by phosphorylase and debranching enzyme can happen in the cytosol, glycogen is also degraded via a lysosomal pathway, leading to a lysosomal storage disease called Pompe disease (glycogen storage disease Type II). In Pompe disease, a mutation involving lysosomal alpha-glucosidase—also called acid maltase—developed. As a result, glycogen accumulates in the lysosome and its vesicles, leading to fatal outcomes, including cardiomyopathy and muscular hypotonia. The precise pathway in which glycogen in transported to lysosomes is still unknown but is hypothesized to be through macroautophagy, in which engulfment of cargo within double-membrane vesicles called autophagosomes fuse with the lysosome.[1]

Glycogen storage disease Type III also referred to as Cori disease, results due to a deficiency of glycogen debranching enzyme. As a result, this disease manifests with an accumulation of abnormal glycogen since glycogenolysis halts when glycogen phosphorylase encounters a branching point. The glycogen is then considered abnormal because it reflects very short outer chains. With Cori disease, patients present with ketotic hypoglycemia and hepatomegaly. In rare cases, it can lead to liver cirrhosis and hepatocellular carcinoma.[5]

Glycogen storage disease Type V (McArdle disease) develops due to a deficiency in skeletal muscle glycogen phosphorylase. In other words, with this disease, the liver is spared. Patients demonstrate exercise intolerance, muscle weakness, cramping, and pain. Creatine kinase levels become elevated, and myoglobinuria can be present. Typical of this disease is a phenomenon called second wind, where patients can resume exercise when resting briefly. Ingestion of sucrose before exercise can help alleviate symptoms since this becomes the source of energy during exercise before resorting to glycogen stores. When glycogen phosphorylase is deficient in the liver, a different disease develops—Type VI GSD. Hers disease exhibits normal creatine kinase and uric acid levels. Patients present with growth retardation and liver enlargement. Hyperlipidemia and ketotic hypoglycemia can be common.[5]

In Lafora progressive myoclonus epilepsy, increased phosphorylation of glycogen is present in several tissues, leading to toxicity and cell death in neurons. Symptoms include ataxia, seizures, myoclonus, and dementia. The presence of more than normal phosphorylation levels in glycogen effectuates in longer chains and irregular branch points that render the polymer insoluble and degradation resistant. As a result, patients with this condition have a conglomerate of inclusion bodies called Lafora bodies.[5]

The importance of glycogenolysis is demonstrated through mutations in glycogen degradation leading to human genetic disorders and through the inability of skeletal muscle to cope with physical stress when glycogen scarcity exists. 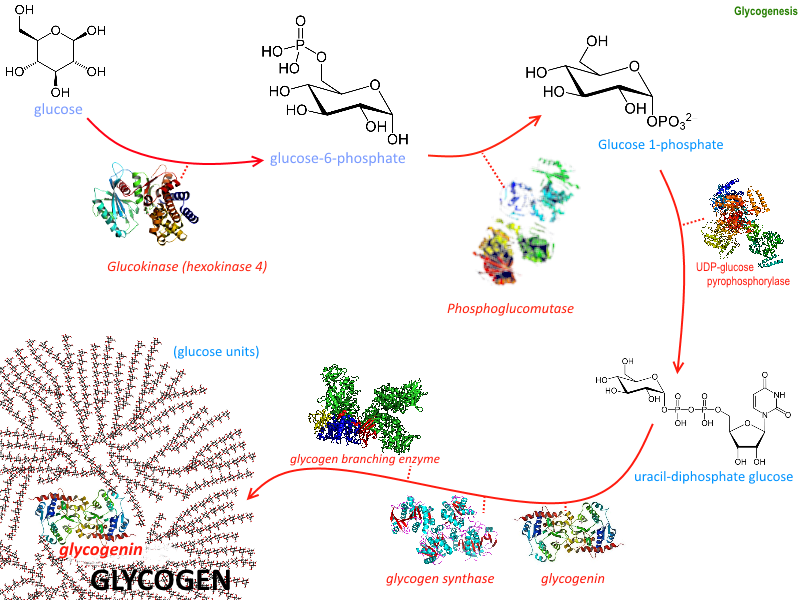