The most anterior region of the head is the face. The human face is a unique aspect of each individual. The face contains many structures that contribute to the display of emotions, feeding, seeing, smelling, and communicating. One of the most distinguishing qualities of the face is that it is used for personal identity from person to person. Identity is essential since the face is usually the first aspect of a human that is noticeable during encounters with other individuals.

The anatomy of the face can divide into three main regions: upper face, middle face, and lower face. The entire face is covered by skin superficially, while the deep anatomy contains muscles, fat pads, nerves, vessels, and bones.

The bony structure of the forehead is made up of the frontal bone predominantly, while the lateral region of the upper face that corresponds to the temporal part forms from the temporal and sphenoid bone.

The bony structures that make the eye region are the frontal bone superiorly, nasal bone medially, maxilla inferomedially and the zygoma makes the inferior and the lateral part of the orbit.

The middle face region starts superior at the lower eyelid and spans inferior terminating just above the upper lip. The ears enclose the lateral borders of the central face. The central face region contains the nose, cheeks, and ears.

The bony structure that makes the cheek region is the maxilla bone.

The bone structure that allows for the ears to protrude from is the temporal bone.

The bony structures of the lips are made from the maxilla superiorly and the mandible inferiorly.

The lymphatic drainage of the face is dependent on the location on the face. The nasal region contains facial lymph nodes, while the region closer to the ears and angle of the mandible contain preauricular lymph nodes. The lymph in the face tends to drain to submental, submandibular, and cervical lymph nodes depending on which is closer. The right side of the face will eventually drain into the right lymphatic duct while the left side will drain into the thoracic duct. The right lymphatic duct and the thoracic duct then drain back into the central circulation.

These are the muscles located on the face.

The face is one of the most variable structures in humans. The face represents the identity of each person. Unfortunately, some individuals are born with congenital defects that alter the appearance of their face. And others suffer injuries or diseases that affect the way their face appears. And others alter the appearance of their faces with cosmetics products and procedures. The human face can also change over time as a person ages. The environment and lifestyle of an individual can manifest in changes in the face. For instance, a person exposed to UV light will have darkening of the skin, while an individual that consumes an excessive amount of calories may gain fat content in their face. For this reason, the human face is extremely variable, but the standard features such as the eyes, nose, and mouth are consistently present in most individuals.

Otoplasty is a surgical procedure done to correct or alter the ear. This surgery is done to improve the proportions and position of the ear to make a face appear more desirable to the patients.[8]

Rhytidectomy is also known as a facelift. This procedure reduces the appearance of the wrinkles and sagging skin from aging. In a facelift, the surgeon may remove excess fat pad and resect excess sagging skin to create a tighter and more defined face.[9]

Lower rhytidectomy is also known as a neck lift. This procedure targets the platysma muscle. The resection and tightening of the skin on the neck make the neck appear more desirable and hides the features of aging in some individuals.[10]

Buccal fat removal is a procedure where the buccal fat pad is removed to create the illusion of dimpling and a more defined cheekbone.[11]

Mentoplasty is a procedure done to enhance the appearance of the chin by implants or resection of the chin. The decision to resect or to add chin implants is decided by the patient on what would make them appear more natural or enhanced.

Rhinoplasty is also known as a nose job. Rhinoplasties are done to alter the appearance of the nose to make it appear more proportionate to the dimensions of the face.

The face is a structure in the human that is commonly affected by dermatological disease and conditions. Many dermatological disorders appear in the face, such as acne vulgaris, neoplasms, rashes, sun damage, and more. The various skin diseases in the face are treated based on the underlying etiologies.

The appearance of the face can also be used to guide treatment in patients since the face can show clinicians the patient's mood through facial expressions. For example, pain can appear as grimace in the face, and happiness present by smiling, and anger can also be visible in the face. These distinctions in the human face can guide in tailoring the patient's care accordingly. Also, the face can appear flushed when the patient has an elevated temperature. The phenomenon of facial flushing is due to the dilation of blood vessels in the face. The reason for this noticeable flushing is due to the dense vascularity of the face. Many etiologies can result in a flush face, but this can be one sign that can further guide a clinician in narrowing his or her differential diagnoses.

The face is a structure that is heavily innervated by nerves. Any disturbances in the innervation of these nerves will manifest as defects in the face. One example is the middle cerebral artery (MCA) infarction. This may manifest as contralateral drooping and impaired sensation of the face sparing the forehead. These clinical features can guide clinicians in the diagnosis of an MCA stroke, while complete unilateral drooping of the face can present in Bell palsy. These differences are useful to determine the etiologies of the conditions. 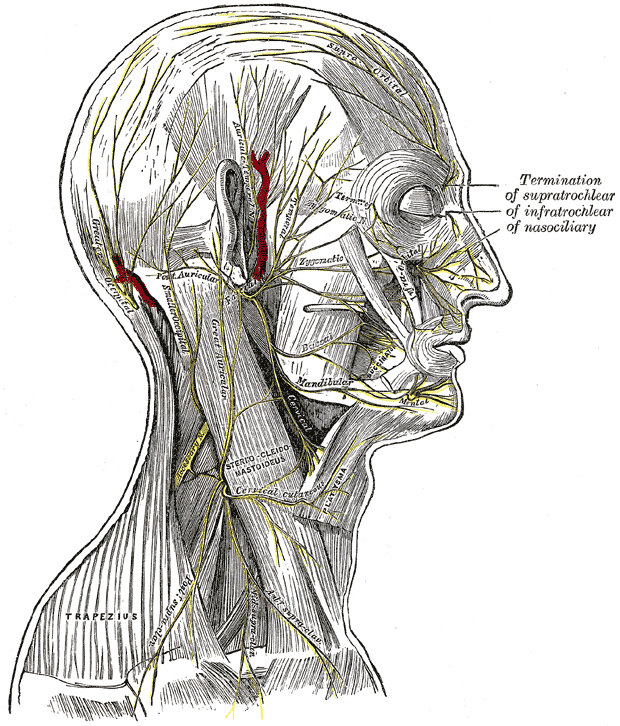 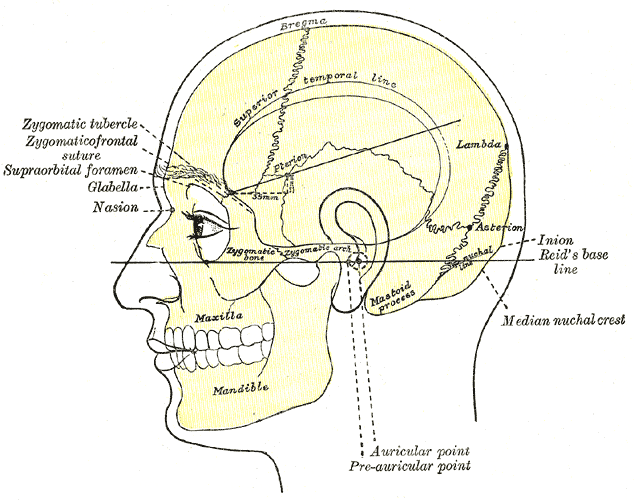 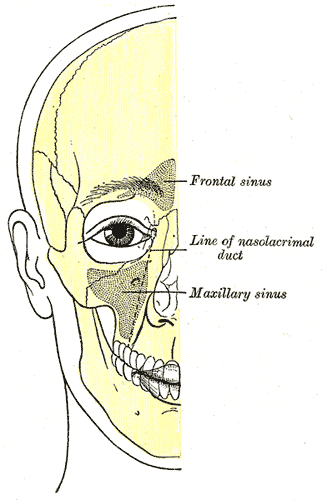 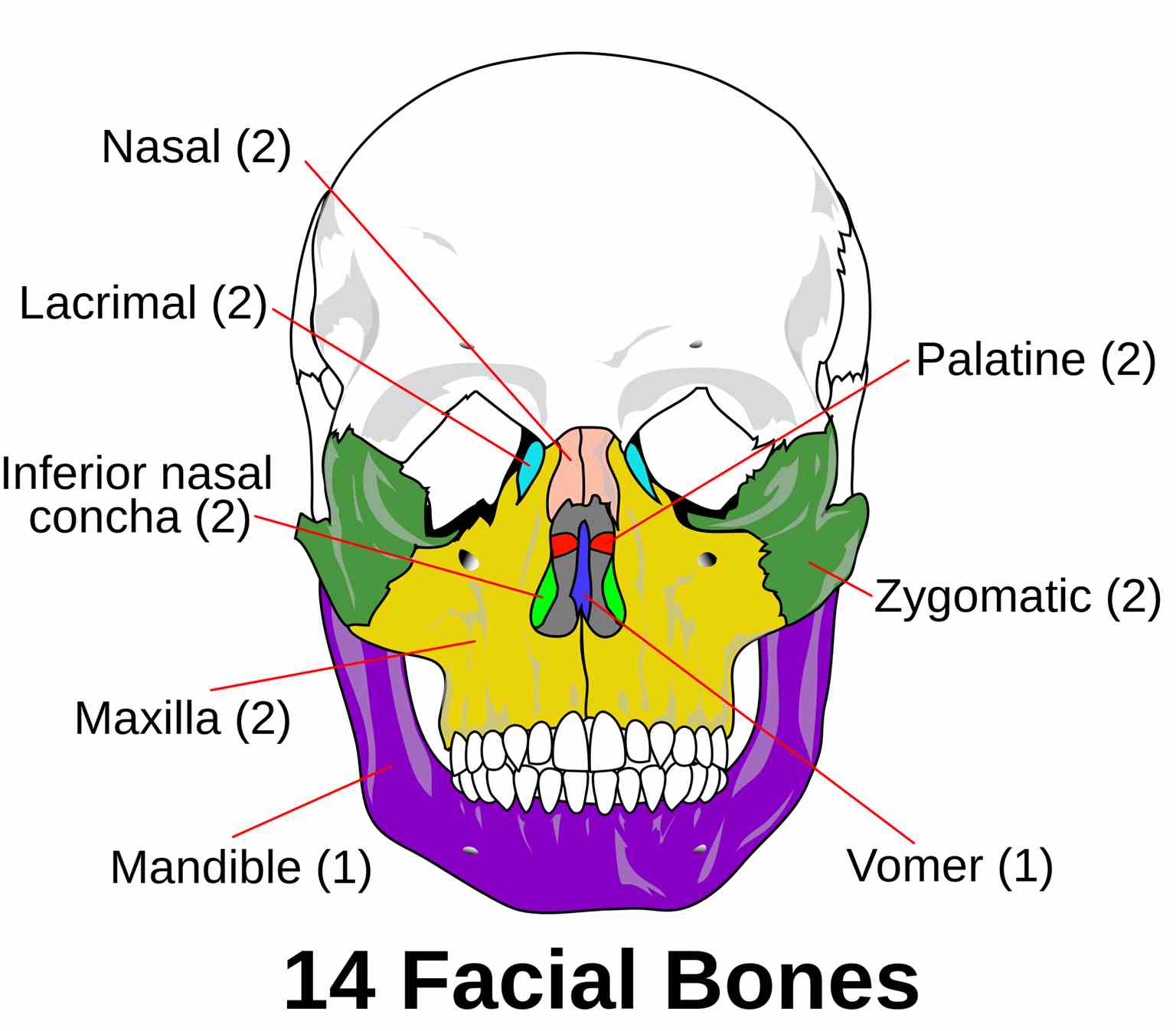 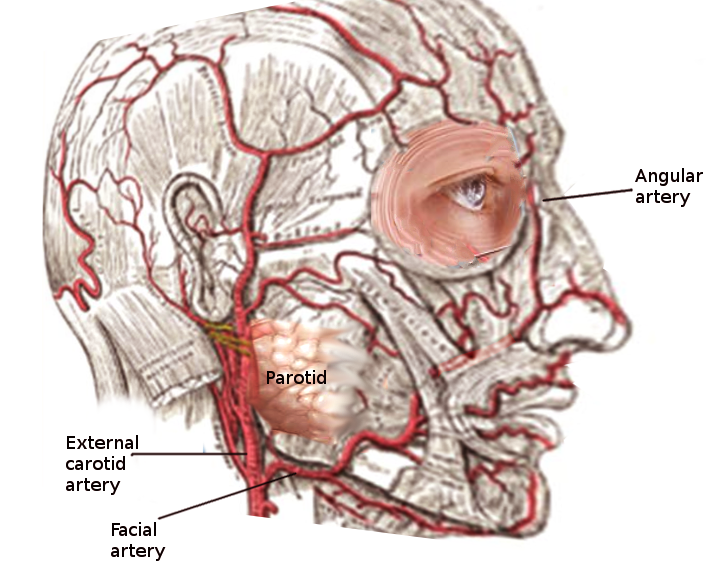