The eyelid skin is unique because it has no subcutaneous fat and is thus the thinnest layer of skin on the body. The skin overlying the tarsus tends to be firmly attached to the underlying tissue; whereas, the skin above the tarsal plate, in the upper lid, and below the tarsal plate, in the lower lid, overlying the orbital septum is loosely attached to underlying tissue giving rise to a potential space for fluid to collect in the setting of trauma or edema.

Orbital fat is located immediately posterior to the orbital septum and anterior to the levator aponeurosis in the upper lid and capsulopalpebral fascia of the lower lid. In the upper lid, there are two discrete nasal and central fat pads. In the lower eyelid, there are three fat pads: nasal, central, and temporal. Thin fibrous capsules surround the pads. The inferior oblique muscle runs in between the medial and central fat pad in the lower eyelid and is an important anatomical landmark during eyelid and orbital surgery.

This non-keratinizing squamous epithelium lines the inner surface of the eyelids and continues to cover the anterior surface of the globe where it terminates at the edge of the cornea. The conjunctiva contains mucin-secreting goblet cells and accessory lacrimal glands that assist in keeping ocular tissues lubricated.

In the nasolacrimal system (not represented in the illustration) both the upper eyelid and the lower eyelid have small openings on the surface of the eyelid margin near the medial canthus called puncta. The puncta lead to a drainage channel called the canaliculus, the superior and inferior of which merge medially to form the common canaliculus. The canaliculi travel 2 mm inferiorly (lower lid) or superiorly (upper lid) from the punctum, then turn 90 degrees medially and travel 8 mm to 10 mm before reaching the common canaliculus. The common canaliculus then drains into the lacrimal sac which in turn drains to the nose underneath the inferior turbinate via the nasolacrimal duct. [1]

The eyelid is derived from secondary mesenchyme and surface ectoderm. Secondary mesenchyme is produced when the cranial neural crest cells invade the mesoderm. The surface ectoderm gives rise to the eyelid skin epithelium, conjunctival, hair follicles and accessory glands. The mesenchyme gives rise to the tarsal plate, the muscles in the eyelid and the orbital septum. The eyelid begins to form during week 6 of gestation and continues to develop until nearly complete at 36 weeks. The stages of development are formation, fusion, development, separation, and maturation.[2]

The inferior eyelid gets the majority of its blood from the external carotid artery. Blood flows from the external carotid artery to the facial artery to the angular artery and then to the inferior marginal artery. The upper and lower eyelids have rich vascular supply and have many anastomoses between the upper and lower lid circulations.

Directly under the upper and lower eyelid skin is the orbicularis oculi muscle. This is the main protractor muscle (closure) of the eyelid. The orbicularis oculi muscle is a large, thin, circular muscle that is divided into pretarsal, preseptal, and orbital segments. The pretarsal and preseptal segments are responsible for involuntary eyelid closure (blinking). The orbital segment is primarily responsible for voluntary/forced eyelid closure.

The levator muscle originates in the apex of the orbit, travels forward over the eyeball, and splits into two unique structures: the levator aponeurosis anteriorly and the superior tarsal muscle (Muller's muscle) posteriorly. The split occurs superiorly at the Whitnall ligament and inferiorly at the Lockwood ligament.

Muller's muscle extends from the undersurface of the levator aponeurosis at the level of the Whitnall ligament and inserts along the upper eyelid superior tarsal margin. It is a sympathetically innervated retractor muscle of the upper eyelid and provides approximately 2mm of eyelid elevation.

The capsulopalpebral fascia is analogous to the levator aponeurosis in the upper eyelid. Its fibers originate from attachments to the inferior rectus muscle. It extends forward, envelops the inferior oblique muscle, forms the Lockwood ligament, and continues anteriorly, attaching to the orbital septum and inferior conjunctival fornix before finally inserting on the inferior tarsal border.

The inferior tarsal muscle is analogous to the Muller's muscle in the upper eyelid. This muscle is poorly developed and runs posterior to the capsulopalpebral fascia of the lower eyelid. [4]

Many surgical procedures can be done on eyelids to address a variety of eyelid conditions. One of the most common eyelid surgeries performed on adults is to correct dermatochalasis of the eyelids. This is called a blepharoplasty and consists of surgically removing eyelid skin along the eyelid crease for improved cosmesis or for therapeutic purposed to improve the superior visual field that is being occluded from hanging eyelid skin.[5]

Many different types of conditions can affect the eyelids. An example of a common condition is when the glands that produce oil in the eyelid can become obstructed or infected and cause a painful, inflamed nodule on the eyelid. If the nodule is infected, it is called a hordeolum. If the nodule is a sterile collection of debris from an obstructed gland it is called a chalazion. Another common condition that can affect the eyelids is known as blepharitis. This is when the eyelid margin becomes inflamed and irritated. 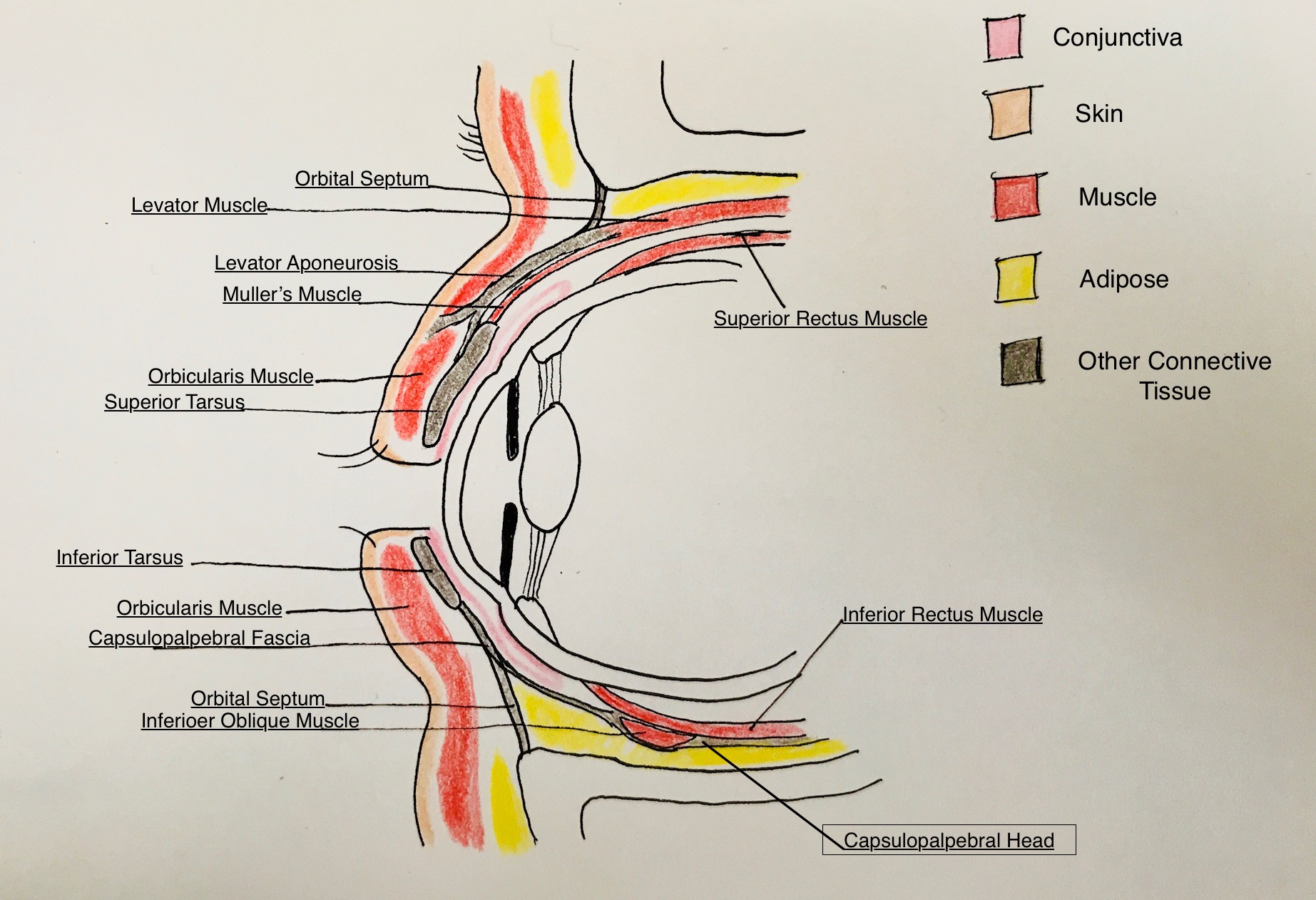