Empty sella syndrome (ESS), also known as arachnoidocele, is a disorder in which the subarachnoid space herniates into the sella turcica causing compression and flattening of the pituitary gland and stretching of the pituitary stalk. Over the years, the term empty sell was adapted further by radiologists observing a similar phenomenon in CTs and MRIs of the brain. This activity articulates how to properly evaluate for this condition, and highlights the role of the interprofessional team in caring for patients with this condition.

Empty sella syndrome (ESS), also known as arachnoidocele, is a disorder in which the subarachnoid space herniates into the sella turcica causing compression and flattening of the pituitary gland and stretching of the pituitary stalk.  There is still some debate as to who first coined the term “empty sella”; W. Bush vs. Sheehan and Summer. Both used this term around the 1950s to describe a phenomenon recognized in cadavers in which there was an empty appearance of the sella turcica and flattened pituitary gland. Over the following years, the term was adapted further by radiologists observing a similar phenomenon in computed tomograms (CTs) and magnetic resonance imaging scans (MRIs) of the brain.

PES is a disorder caused by the incompetence of the diaphragma sellae and resultant herniation of CSF into the sella turcica. There is no clear genetic association known to predispose someone to develop PES, but the incompetent diaphragma sellae is likely to present at birth. SES results from surgery, radiation, hemorrhage, or infarction of the pituitary gland and it can happen at any time in a person's life.

Empty sella syndrome is considered to be a rare entity, but research reports its incidence as present in 5.5 to 12% of autopsy cases, and it is also estimated to be present in around 12% of patients undergoing neuroimaging.[1] Some reports note an even higher incidence in clinical practice with estimates of up to 35%.[1] It demonstrates a female predilection with a ratio of 4 or 5 to 1 over males, and it is more common in obese patients. The incidence of ESS peaks in the fourth to the sixth decade.[1][2] Although more common in women, the pituitary hormonal dysfunction appears to occur at higher rates in men with empty sella.

PES is the less common of the two entities. Currently, its cause is not entirely understood, but researchers have proposed several mechanisms including incompetence or complete absence of the diaphragma sellae, chronic intracranial hypertension, and temporary expansion followed by regression of the pituitary gland.

SES, on the other hand, is much more common than PES. It could be the result of the treatment of a pituitary adenoma (by either drugs, surgery, or radiotherapy), spontaneous regression of the pituitary gland under different circumstances, postpartum pituitary necrosis (also known as Sheehan syndrome) or lymphocytic hypophysitis.[2]

History and physical exam are typically normal in patients with empty sella syndrome because the endocrine function is usually intact. The most common symptom associated with ESS is a headache. There is lack of evidence to support ESS as the cause of the headache and many experts believe that the association exists because the headache of any unrelated cause prompted imaging of the head to be done leading to the incidental discovery of the empty sella. Other authors consider the possibility that increased intracranial pressure and possible herniation is the cause of the headaches; however, no confirmation of this theory exists either.

Spontaneous cerebrospinal fluid rhinorrhea is possible as is visual field impairment; however, both of these presentations are rare.[5]

Endocrine abnormalities are present in less than 20% of cases of the empty sella. If the pituitary function is compromised, history and physical exam can be consistent with any, or all, of the pituitary hormone deficiencies.

Testing of the entire pituitary axis is appropriate and highly recommended in patients with empty sella syndrome after diagnosis; however, there is currently a lack of society based guidelines.[6][7][8] In most cases, the pituitary function is normal (despite the abnormal appearance of the pituitary gland), but in some cases (around 20%) any, or all, of the pituitary hormone levels can be affected. Hyperprolactinemia and growth hormone deficiency appear to be the two most common findings in empty sella.[2][9] Hyperprolactinemia is present in 10 to 17% of cases and may result from a microprolactinoma or functional hyperprolactinemia.[1][9] Growth hormone deficiency presents in 4 to 60% of cases, but its clinical significance in adults is unclear.[1][6] Gonadotropin deficiency is seen in 2 to 32% of cases while adrenocorticotropin, thyroid-stimulating hormone, and antidiuretic hormone deficiencies are seen less frequently, around 1% each.[6]

The following labs are necessary for the evaluation of pituitary function in any patient found to have empty sella:

In most instances, no treatment is necessary for empty sella syndrome. If there is hormone deficiency or excess, treatment is individualized towards the hormone derangements present.

Empty sella is a radiologic finding and diagnosis. Differentials relating to this entity stem from each specific cause (ex. intracranial hypertension would have many differentials). Please see the pathophysiology section for further details.

The presence of empty sella syndrome does not change life expectancy, and it is usually a benign condition. In cases where a specific hormone deficiency or excess is present, that specific hormone abnormality and its treatment determine the prognosis.

Possible complications of empty sella include the development of partial, or complete, hypopituitarism, or hormone hyperfunctioning as noted above. Additionally, there is an association of worse outcomes for patients undergoing pituitary surgery with known primary empty sella (ex. Cushing's disease).[10]

There is nothing in particular that patients can do to avoid this phenomenon, but they should be aware of the need for evaluation of hormone levels at diagnosis. If initial hormone levels are all within normal limits, no additional testing is required.

Empty sella syndrome is a rare entity that is usually found incidentally during evaluation of headache or other complaints leading to imaging of the brain/head. Although only a small fraction of these patients have associated hormone deficiencies, a full pituitary hormone workup is the indicated screening approach at diagnosis, and the patients should receive an endocrinologist referral. The optimal management approach an interprofessional team of specialty-trained nurses and clinicians providing regular follow up, education of the patient and family, coordination of care, and laboratory evaluation. [Level 5] 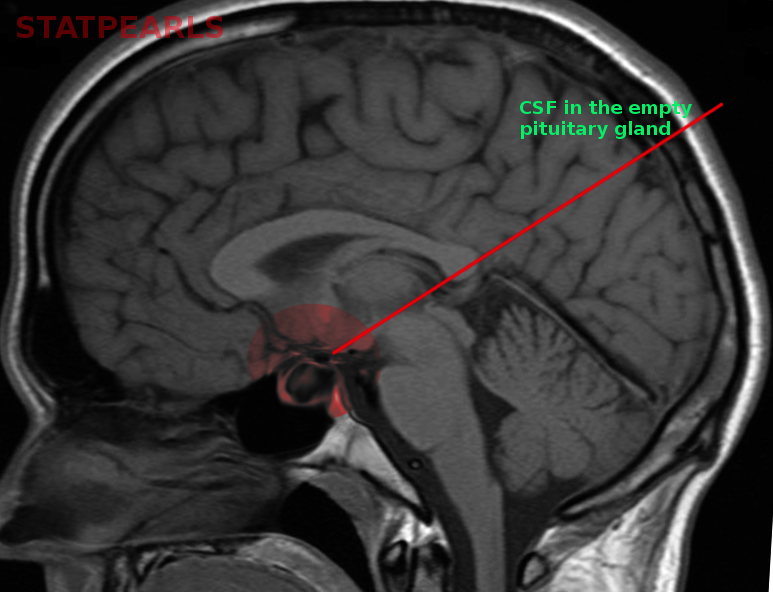