Decelerations are temporary decreases in the fetal heart rate (FHR) during labor. Hon and Quilligan first described three types of decelerations (early, variable, and late) in 1967 based on the shape and timing of decelerations relative to uterine contractions.[1] Intrapartum FHR monitoring allows for the identification of changes associated with fetal distress that allows for early intervention.

As early decelerations are not associated with decreased fetal oxygenation or metabolic acidosis, they do not require any treatment. However, it is crucial to continue to monitor FHR tracings throughout labor to recognize any patterns that may be a concern regarding changes in the acid-base status of the fetus.

The three-tiered fetal heart rate interpretation system is as follows[2]:

Category I (Must include all of the following):

Current data do not show a clear benefit to the use of continued fetal monitoring over intermittent auscultation, thus either is acceptable for uncomplicated patients. The ACOG recommends continuous FHR monitoring for high-risk patients, such as those with known intrauterine growth restriction or preeclampsia. When using continuous FHR monitoring during labor, recommendations are that nurses and physicians review it frequently. In a patient without complications, the recommendation is that it be reviewed every 30 minutes in the first stage of labor and every 15 minutes during the second stage. In high-risk patients, the tracing requires a review every 15 minutes in the first stage and every 5 minutes in the second stage.[2] [Level V] 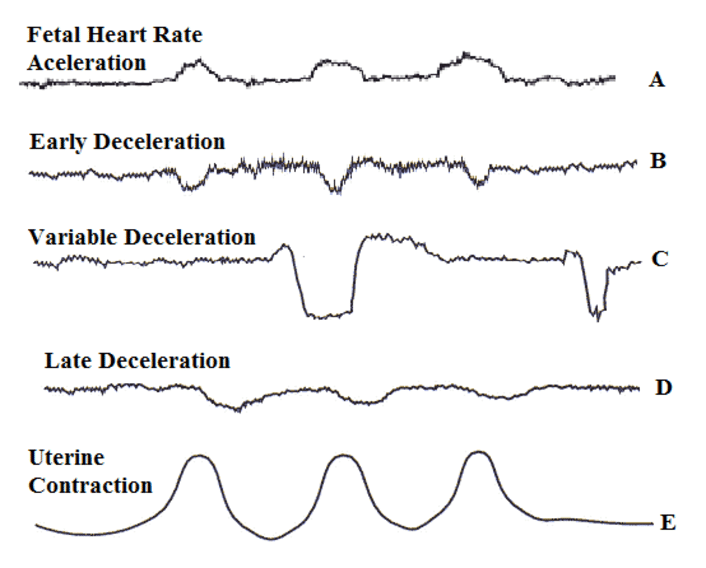