Diazepam is a benzodiazepine medication that is FDA approved for the management of anxiety disorders, short-term relief of anxiety symptoms, spasticity associated with upper motor neuron disorders, adjunct therapy for muscle spasms, preoperative anxiety relief, management of certain refractory epilepsy patients, and adjunct in severe recurrent convulsive seizures, and an adjunct in status epilepticus. Off-label (non-FDA approved) use for diazepam includes sedation in the ICU and short-term treatment of spasticity in children with cerebral palsy. This activity will highlight the mechanism of action, adverse event profile, approved and off-label uses, dosing, pharmacodynamics, pharmacokinetics, monitoring, and relevant interactions of diazepam, pertinent for interprofessional team members using diazepam for any of its intended indications.

Diazepam is an anxiolytic benzodiazepine, first patented and marketed in the United States in 1963. It is a fast-acting, long-lasting benzodiazepine commonly used to treat anxiety disorders and alcohol detoxification, acute recurrent seizures, severe muscle spasms, and spasticity associated with neurologic disorders. In the setting of acute alcohol withdrawal, diazepam is useful for symptomatic relief of agitation, tremor, alcoholic hallucinosis, and acute delirium tremens.[1] Benzodiazepines have largely replaced barbiturates in treating anxiety and sleep disorders because of their improved safety profile, fewer side effects, and flumazenil(antagonist) availability that can reverse oversedation in cases of benzodiazepine intoxication.[2][3]

Diazepam is FDA approved for the management of anxiety disorders, short-term relief of anxiety symptoms, spasticity associated with upper motor neuron disorders, adjunct therapy for muscle spasms, preoperative anxiety relief, management of certain refractory epilepsy patients and adjunct in severe recurrent convulsive seizures, and an adjunct in status epilepticus. Off-label (non-FDA approved) use for diazepam includes sedation in the ICU and short-term treatment of spasticity in children with cerebral palsy.[4]

Benzodiazepines exert their effects by facilitating the activity of gamma-aminobutyric acid(GABA) at various sites. Specifically, benzodiazepines bind at an allosteric site at the interface between the alpha and gamma subunits on GABA-A receptor chloride ion channels. The allosteric binding of diazepam at the GABA-A receptor leads to an increase in the frequency at which the chloride channel opens, leading to an increased conductance of chloride ions. This shift in charge leads to a hyperpolarization of the neuronal membrane and reduced excitability of the neuron.[5]

Diazepam is highly lipophilic. While there is a moderately quick onset of action, the drug quickly redistributes. Diazepam is mostly broken down by the microsomal enzymes CYP2C19 and CYP3A4 enzymes to several active metabolites, mainly desmethyldiazepam. Other minor active metabolites include oxazepam and temazepam. The average half-lives of oral diazepam and desmethyldiazepam are about 46 hours and 100 hours, respectively.[6]

Potent inhibition of the CYP2C19 enzyme by certain drugs (fluoxetine and chloramphenicol) and CYP3A4 enzymes by certain medications (ketoconazole, protease inhibitors, erythromycin) may cause increased levels of diazepam. In contrast, inducers of CYP2C19 (rifampicin and prednisone) and CYP3A4 (carbamazepine, topiramate, phenytoin, St. John's wort, rifampin, or barbiturates) may cause lower levels. Metabolites of diazepam are conjugated with glucuronide and excreted almost entirely in the urine.[7][8]

Diazepam is available in multiple formulations, including oral tablets, intramuscular injections (IM), intravenous injection (IV), or rectal gel. Oral tablets have a more reliable absorption and controlled release when compared to IM. When administered intravenously, diazepam has an onset of action within 1 to 3 minutes, while oral dosing onset ranges between 15 to 60 minutes. Diazepam is long-lasting with a duration of action of more than 12 hours.

Like most benzodiazepines, the adverse reactions of diazepam include CNS and respiratory depression, dependence, and benzodiazepine withdrawal syndrome.[13]

Serious adverse effects of diazepam include:

Common adverse effects of diazepam include:

Use in Special Populations

Diazepam classifies as FDA pregnancy category D, which means that there is positive evidence of human fetal risk. Still, the benefits from use in pregnant women may be acceptable despite the risk. The use of diazepam and other benzodiazepines in pregnancy correlates with an increased risk of congenital malformations, premature birth, low birth weight, and other neurodevelopmental abnormalities. However, additional studies are needed to confirm.

Diazepam readily crosses the placental barrier, and use during pregnancy may result in neonatal withdrawal soon after birth. Symptoms of neonatal withdrawal include high-pitched cry, hypertonia, tremor, irritability, feeding difficulties, sleep/wake disturbances, gastrointestinal and autonomic disturbances, respiratory problems, and failure to thrive. The onset of withdrawal in a neonate whose mother has taken diazepam during the pregnancy could be anywhere from the first days of life to the first few weeks. During the last trimester of pregnancy, diazepam use can result in “floppy infant syndrome,” characterized by hypotonia, hypothermia, lethargy, respiratory distress, and suckling difficulties.[19][20]

Diazepam and its metabolites are excreted in breast milk and may produce effects in the nursing infant. Some studies have shown the relative infant dose (RID) of diazepam to be approximately 9%. Relative infant dose (RID) is the dose received via breast milk relative to the mother’s dose. A relative dose below 10% is within an acceptable range regarded as reasonably safe in the short term. However, due to diazepam’s long half-life, metabolites may accumulate in a breastfed infant. Therefore, the clinician should monitor an infant breastfed by a mother receiving diazepam for drowsiness, decreased feeding, lethargy, and failure to thrive. Discontinue breastfeeding in cases with high doses of diazepam or when repeated administration will be necessary.[21][22]

One should exercise caution when prescribing diazepam to the older population. Elderly patients tend to have decreased renal function and clearing capability; therefore, this population is at an increased risk of diazepam accumulation and its major metabolites. The recommendation is to limit the dosage to the smallest effective amount. Paradoxical reactions of CNS hyperactivity have also been reported when using benzodiazepines in the elderly, manifesting as hyperactivity, aggressive behavior, irritability, anxiety, and hallucinations. Should this occur, discontinuation is the recommendation.[23][24][25]

Simultaneous use of benzodiazepines and opioids may result in respiratory depression, profound sedation, coma, and death. Reserve concomitant prescribing of these drugs for patients for whom alternative treatment options are inadequate. Minimize dose to the minimum to prevent fatal respiratory depression.[26]

It is crucial to monitor respiratory and cardiovascular status, blood pressure, heart rate, and anxiety symptoms in patients taking diazepam. With long-term use, monitor liver enzymes, CBC, and for signs of propylene glycol toxicity, including serum creatinine, BUN, serum lactate, and osmolality gap. With critically ill patients, monitor the depth of sedation.[27]

The toxic-to-therapeutic ratio of benzodiazepines is very high, making them relatively safe medications. However, the potential of overdose from diverted diazepam always exists when combined with opioids, alcohol, or other centrally acting agents. Overdose in adults frequently involves the co-ingestion of other CNS depressants, which work synergistically to increase toxicity. In the case of single-agent diazepam overdose, symptoms manifest as CNS depression and are very rarely fatal. In mild cases, lethargy, drowsiness, and confusion are common symptoms. In cases of severe overdose, symptoms manifest as ataxia, diminished reflexes, hypotonia, hypotension, respiratory depression, coma (rarely), and death (very rarely).[19]

Potential for Diazepam Abuse and Dependence

Diazepam is a Schedule IV controlled substance with the potential for abuse. Development of dependence and tolerance can occur in addiction-prone, long-term treatment or those patients taking high doses. Thus, these individuals should be under careful supervision. Once an individual develops dependence, the risk of developing withdrawal symptoms increases. Signs of benzodiazepine withdrawal include tremor, rebound anxiety, perceptual disturbances, dysphoria, psychosis, agitation, irritability, restlessness, sweating, headache, confusion, myalgias, abdominal pain, and vomiting. In long-term use and abrupt cessation, there is potential for hallucinations and epileptic seizures to occur.[28]

Diazepam is a fast-acting potent anxiolytic popular due to its broad therapeutic index, low toxicity, and improved safety profile. Nonetheless, diazepam is still a drug with high potential for use disorder associated with severe adverse/toxic effects. Therefore, clinicians should identify the proper indication for the prescription of diazepam. Psychiatrist consultation is necessary in the cases of anxiety disorders. Neurologists should prescribe diazepam in spasticity and status epilepticus, considering the risk vs. benefit ratio for the individual patients. The pharmacists are responsible for proper dosing of diazepam and medication reconciliation. The pharmacist should report back to the clinician if there are significant interactions.[30][31]

In acute overdose of diazepam, triage nurses and emergency department physicians are responsible for rapid diagnosis and stabilization of the patient. Critical care physicians should manage respiratory depression and which can be life-threatening if not treated promptly. In ICU, regular assessment of RASS(Richmond agitation-sedation scale) and CAM-ICU(confusion assessment method for the ICU) scoring should guide the proper use of sedatives.  Consulting the psychiatrist is especially important if the diazepam overdose is intentional.[32] 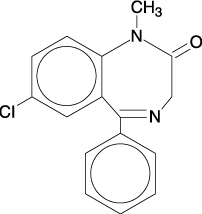 Chemical Structure of Diazepam
Contributed by US National Library of Medicine

Nutt DJ,Malizia AL, New insights into the role of the GABA(A)-benzodiazepine receptor in psychiatric disorder. The British journal of psychiatry : the journal of mental science. 2001 Nov;     [PubMed PMID: 11689393]