The bladder is initially derived from the upper segment of the urogenital sinus in the fetus and connected with the allantois. However, the allantois eventually becomes obliterated to become the urachus leaving just the bladder. Detrusor smooth muscle is of both mesodermal and neural crest origin.

The upper portion of the urinary bladder is supplied primarily by the superior vesical artery, which is a branch of the hypogastric artery. The lower portion receives supply from the vaginal artery in females and by the inferior vesicular artery in males. There is minor blood supply via the inferior gluteal and obturator arteries as well. The venous system drains via the vesical venous plexus, which empties into the vesical veins. Vesical veins eventually lead to the internal iliac veins. The lymphatics of the bladder mostly drain into the external iliac lymph nodes.

The detrusor muscle is under autonomic control. The parasympathetic nervous system stimulates the muscarinic stretch receptors in the bladder through the pelvic nerve fibers. When urine fills the bladder, the M3 receptors located within the bladder become stretched and stimulated, which leads to the contraction of the detrusor muscle for urination. At the same time, the parasympathetic fibers inhibit the internal urethral sphincter, which causes relaxation allowing for bladder emptying.

When the bladder empties of urine, the stretch fibers become inactivated, and the sympathetic nervous system is stimulated to activate the beta-3 receptors through the adenylyl cyclase-cAMP pathway in the bladder. This process is achieved via the hypogastric nerve, causing relaxation of the detrusor muscle. Newer beta-3 agonists utilize this pathway to treat bladder overactivity. During ejaculation, the sympathetic response leads to the contraction of the internal urethral sphincter to prevent the reflux of semen into the bladder. This response also prevents urine from passing during ejaculation. The most sensitive region of the bladder for the stretch receptors is the trigone.

Sensory fibers detect pain from overdistention. The center for coordinating urination is in the pons.[3][4]

The detrusor muscle is located within the walls of the bladder and is composed of smooth muscle fibers that are longitudinal and circular. The layers of the detrusor muscle start longitudinally in the inner layer, become circular in the middle layer, and then longitudinal again in the outer layer. The muscle is continuous with the internal urethral sphincter, which is also composed of smooth muscle. The ureter passes obliquely through the detrusor muscle to prevent the reflux of urine into the kidney as the bladder fills. If this ureteral tunnel is not oblique or short, then urine can reflux into the kidney causing infections, renal scarring, and renal damage.

Pediatric detrusor muscle has less contractility and has more passive stiffness compared to adult detrusor muscle; this is most likely due to a greater connective tissue to smooth muscle ratio in children, which is the bladder compliance (change in bladder pressure/change in bladder volume). Poor (decreased) bladder compliance is associated with upper urinary tract damage.

Patients with urinary retention usually present with difficulty voiding, a sensation of incomplete emptying, urinary retention, frequent voiding, and overflow incontinence. Diabetes mellitus and other neurologic conditions such as a stroke are the leading causes of detrusor nerve control degeneration.

Detrusor areflexia is the inability of the bladder to contract, which is typically neurologic in origin. Some causes of detrusor areflexia include spinal cord injury, fractures, herniated disc, and infections.

Damage to the detrusor muscle from chronic overdistention can lead to the fibrosis of the muscle with weakness in the contraction of the muscle. This condition is often referred to as a myogenic bladder.

A common cause of chronic bladder distension is benign prostatic hypertrophy in males and less commonly severe pelvic organ prolapse in females. Whether the issue is of nerve or muscle origin, poor emptying ability is the result.

A subset of women may have detrusor overactivity with poor contractility, which can lead to overflow incontinence. This condition is common in the aging female population. Detrusor overactivity is often associated with urgency incontinence. Urgency incontinence is the sudden urge to urinate, which may lead to leakage. Urgency incontinence is common in older women with other comorbid diseases. Treatment of the underlying disease is the most effective treatment. Usually, the first steps in treatment involve conservative options with lifestyle modifications, pelvic floor exercises, and bladder training. However, if these initial conservative therapies do not improve symptoms, there are other pharmacologic and surgical therapies. The two medication classes commonly used are antimuscarinic drugs such as oxybutynin and tolterodine or beta 3-adrenergic drugs such as mirabegron. Antimuscarinics have side effects such as dry mouth, constipation, blurry vision, drowsiness, and cognitive issues. Sacral nerve stimulation and Botox are other options. More invasive therapies include surgery with augmentation cystoplasty or detrusor myectomy, which improves compliance of the bladder. This limits or prevents upper tract damage resulting from high bladder pressures.[2][7][8]

Bladder cancer is among the most common cancers of the urinary system. It typically presents in older patients with painless hematuria, urinary frequency, urgency, and dysuria. Bladder cancer is diagnosed and staged by doing a cystoscopy with biopsy. The depth of invasion of the cancer is a crucial factor in determining therapy and prognosis.

When cancer spreads to the submucosa or lamina propria, it is considered a T1 lesion. There are multiple therapies for T1 bladder cancer. These include transurethral resection, intravesical therapy, and surveillance. However, when cancer invades past the submucosa into the detrusor muscle, it will be considered a T2 lesion; this is muscle-invasive bladder cancer and is a very important distinction when it comes to therapies because T2 lesions have an increased risk of nodal and distant metastasis. Thus, when cancer invades the detrusor muscle, the standard of treatment is the removal of the urinary bladder (radical cystectomy) and the diversion of the urine. Urinary diversion involves the creation of a bowel conduit or neobladder by harvesting a bowel segment. Finally, T3 lesions are when the tumor extends past the muscle into the perivesical fat, and T4 lesions occur when the tumor spreads to nearby organs.[9] 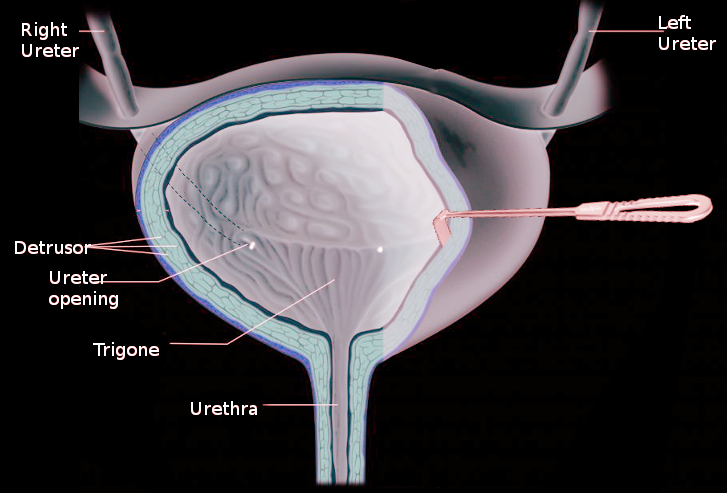 Andersson KE, On the Site and Mechanism of Action of β{sub}3{/sub}-Adrenoceptor Agonists in the Bladder. International neurourology journal. 2017 Mar 24     [PubMed PMID: 28361520]