Cystic kidney diseases are multisystemic disorders that can develop due to genetic or non-genetic causes in children and adults. These can be a serious condition and may cause end-stage renal failure. This activity reviews the general information of cystic kidney diseases and highlights the role of the interprofessional teams in evaluating and treating patients with this disease.

Developmental cystic kidney disease is caused due to abnormal development of the metanephros leading to a multicystic dysplastic kidney, with reduced nephron induction.[7]

Another cause of renal cysts is related to systemic diseases such as tuberous sclerosis (TS) and von Hippel Lindau (VHL) syndrome, which are autosomal dominant conditions with variable penetrance. Acquired cystic kidney disease develops secondary to obstruction of the tubules by fibrosis or oxalate crystals.[8]

Unilateral cystic kidney disease is a rare disease characterized by multiple cysts and is similar to ADPKD in both imaging and pathological examinations.[9]

The incidence of ADPKD is 1/500 to 1000 persons, which affects 12.5 million worldwide, and mostly in adults.[6] End-stage renal disease (ESRD) is one of the significant complications of ADPKD, and symptomatic progression is seen mostly in men. ADPKD affects all racial and ethnic groups.

The incidence of ARPKD is 1 in 6,000 to 55,000 newborns. ARPKD is mostly diagnosed in infancy, childhood, or adolescence. ARPKD is the cause of 5% of ESRD in children.

The incidence of juvenile nephronophthisis (JNPHP) is 1 in 5,000 persons. 10% to 20% of children with JNPHP present with chronic renal failure and 1% to 5% of all patients need dialysis or transplantation. Additionally, JNPHP is the most common reason for genetic ESRD in children.[10][11]

Kidney cysts develop from renal tubule segments and detach from the parent tubule after growing a few millimeters. Development of cyst increases proliferation of the tubular epithelium, abnormalities in tubular cilia, and excessive fluid secretion. ADPKD develops due to mutations in the genes PKD1 and PKD2. ARPKD develops due to variations in PKHD1, which plays a critical role in collecting-tubule and biliary development.[1]

The nephron of autosomal dominant polycystic kidney disease has cystic dilatations with loss of tubule connection microscopically, and the kidneys in ADPKD are enlarged and distorted with multiple renal cysts.[12]

The microscopic evaluation of autosomal recessive polycystic kidney disease shows fusiform dilation of collecting tubules, and the kidneys in ARPKD are also enlarged, but the shape of the kidney is preserved.

In ARPKD, there are also renal and extrarenal presentations such as hypertension, renal insufficiency, palpable bilateral flank masses, electrolyte abnormalities (usually hyponatremia), and growth retardation. Pulmonary hypoplasia is a severe extrarenal finding and may cause neonatal death. ARPKD is generally associated with hepatic disease, including portal hypertension, varices, and splenomegaly.

VHLS is a cystic disease of the pancreas, kidneys, and epididymis, and develops renal cell carcinoma, retinal and cerebellar hemangioblastomas, pheochromocytomas.[14]

The acquired renal cystic disease usually progresses without any symptom; however, it can present with palpable renal mass, gross hematuria, flank pain, and renal colic.

There are several different ways to evaluate for cystic kidney disease due to various types of presentations.

The diagnosis of ADPKD is clinical; however, genetic analysis and sonography can be used for early detection for patients who are asymptomatic but have a family history.[15] Sonography is the standard and cost-effective imaging method, but CT and MRI are more prognostic methods.[16]

ARPKD is diagnosed with genetic testing and sonography. Serum sodium concentration can be used for evaluating hyponatremia; urine osmolality for displaying reduced concentrating ability. Also, bilirubin and hepatic enzyme, complete blood cell counts (CBCs), can be performed for the risk of portal hypertension and splenic dysfunction.

Another helpful tool is the Bosniak classification, which helps to diagnose and manage cystic lesions with pre- and post-contrast CT scanning.[17] It has four categorizations for evaluating cysts in kidneys.

In ADPKD, recommendations include drinking 1 to 2 L of water daily, sodium restriction, exercise, and weight control. Hypertension is a common finding, and there are several options to control hypertension, including angiotensin-converting enzyme (ACE) inhibitors, angiotensin receptor blockers (ARBs), calcium channel blockers. Tolvaptan is a vasopressin receptor antagonist that is effective for ADPKD with selective candidates.[18] Cyst infections can develop in ADPKD, which can be treated with a course of antibiotics such as ciprofloxacin, erythromycin, chloramphenicol, or a tetracycline. Renal cysts are generally asymptomatic, but if it is symptomatic, needle aspiration can be needed. Moreover, laparoscopic techniques can be performed for complex cysts.[19]

ARPKD has no curative treatments; therefore, there is only symptomatic management, including supportive respiratory therapy for pulmonary insufficiency, dialysis for renal failure, salt restriction, and usage of antihypertensives for hypertension, and loop diuretics for edema.[20]

JNPHP and MCKD are managed with salt supplementation when there is severe salt wasting, and dialysis or renal transplantation for ESRD if needed.

Acquired cystic renal disease patients need bed rest and analgesics for mild bleeding episodes of cysts. Hypercalciuria can be treated with oral thiazide diuretics when it occurs in this disease.

Some diseases which may have renal cysts and similar presentations include multilocular cystic nephroma, hemangioma, angiomyolipomas, and renal cell carcinoma. A complete history and physical exam for secondary findings along with imaging modalities and genetic testing can help differentiate the etiology of the renal cysts.

The prognosis in cystic renal diseases depends on extrarenal manifestations and risk for renal failure.

ADPKD will progress to renal insufficiency in patients older than 30 years and end-stage renal failure in 50% of patients. The common cause of death in ADPKD includes renal failure, hypertensive nephropathy, and subarachnoid hemorrhage.

In ARPKD, severe renal insufficiency will develop around 5 to 20 years of age. General death causes are from pulmonary disease and renal failure, usually within six weeks.

In JNPHP and MCKD, renal failure will occur within 5 to 10 years.

Acquired cystic renal disease is progressive, but regresses after transplantation.

ADPKD consists of several complications, including hypertension (most common, and develops at an earlier age), renal failure, cyst infection, severe abdominal and flank pain, and subarachnoid hemorrhage (most severe complication).

Genetic counseling is important for genetic cystic kidney diseases such as ADPKD and ARPKD.

Young ADPKD patients can be asymptomatic until the appearance of complications such as hypertension and renal failure. Early identification can prevent these complications by following a healthy lifestyle, such as visiting the doctor regularly, restricting salt, and exercising regularly.

Autosomal dominant polycystic kidney disease (ADPKD) has many renal and extrarenal complications, such as hypertension, kidney failure, liver, and pancreatic cysts, and intracranial aneurysms, but has no cure yet. The complications can be treated, but renal insufficiency is progressive. Tolvaptan is a vasopressin V2 receptor (V2R) antagonist as it slows the development and growth of the cysts and thus is an effective treatment of ADPKD.[18] [Level 1] 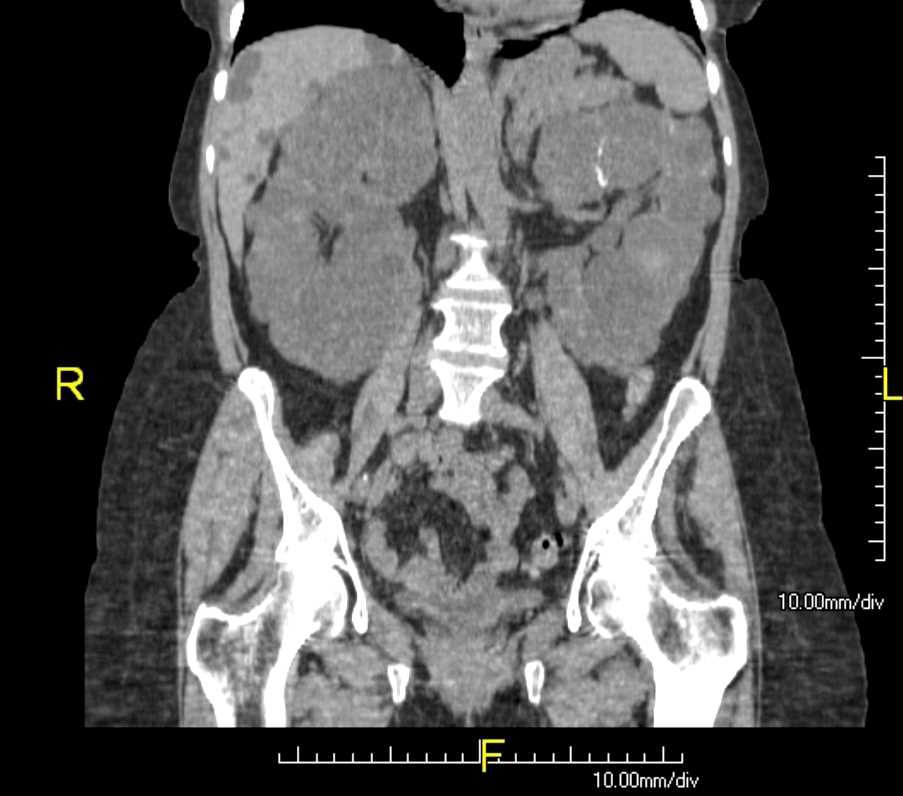 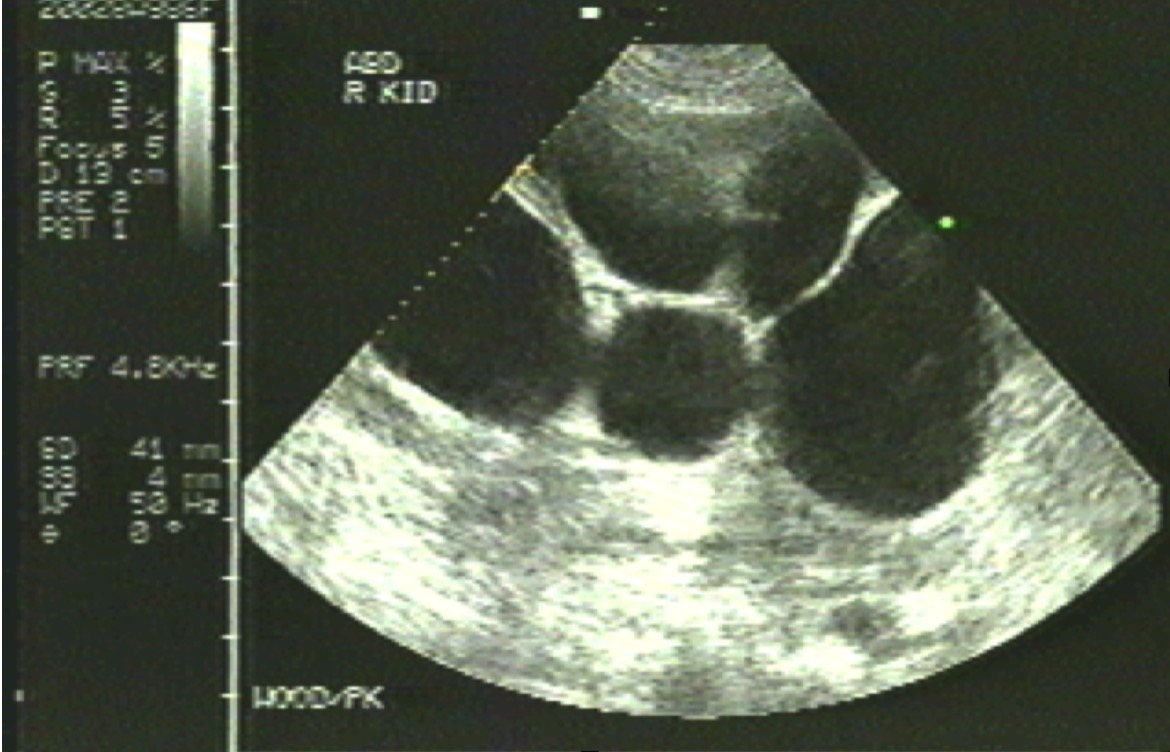 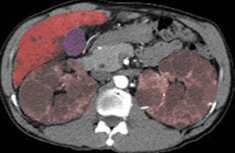