The cubital fossa is an area of transition between the anatomical arm and the forearm. It is located in a depression on the anterior surface of the elbow joint. It is also called the antecubital fossa because it lies anteriorly to the elbow (Latin cubitus) when in standard anatomical position. The cubital fossa is triangular, and thus has three borders along with an apex which is directed inferiorly. It also has a floor and roof, and it is traversed by structures which make up its contents.[1][2][3][4]

The floor of the cubital fossa is formed proximally by the brachialis and distally by the supinator muscle. The roof consists of skin and fascia and is reinforced by the bicipital aponeurosis which is a sheet of tendon-like material that arises from the tendon of the biceps brachii. The bicipital aponeurosis forms a partial protective covering to the medial nerve, brachial artery and ulnar artery. Within the roof runs the median cubital vein, which can be accessed for venipuncture (see clinical significance below).

Anatomically the superficial veins of the cubital fossa are classified into four types according to the presence of the median cubital vein (MCV) or median antebrachial vein.

Type II presenting the both cephalic and basilic vein connected by the median cubital vein is most common followed by type I. Although the most common type of male and female was different as type I and type II, respectively, there is no statistical difference between them. The frequency of the types between right and left upper limbs was also not different. Because of the wide variations of these superficial veins, it has been reported that adverse effects such as bruising, hematoma, and sensory change occurred by mispuncture in various health care systems. Most medical practitioners are aware of two patterns of venous returns in the cubital fossa. This variation underlines the importance of using the intravenous illuminator for venipuncture.

The area just superficial to the cubital fossa is often used for venous access (phlebotomy). One of the most common sites for venipuncture is the superficial veins in the cubital fossa of upper limbs which include the cephalic, basilic, median cubital, and antebrachial veins and their tributaries. Many superficial veins can cross this region. Median cubital vein connects the basilic and cephalic veins and can be accessed easily. This makes it a common site for venipuncture. It may also be used for the insertion of a peripherally inserted central catheter.

This is a  common fracture in young patients and usually, occurs when a person falls onto a hyper-extended elbow. It is a transverse fracture, spanning between the two epicondyles. It can also happen by falling onto a flexed elbow, but this accounts for less than 5% of cases.The displaced fracture fragments may impinge and damage the contents of the cubital fossa. Direct damage or post-fracture swelling can cause interference to the blood supply of the forearm from the brachial artery. The resulting ischemia can cause Volkmann’s ischaemic contracture. Cubital tunnel syndrome is the second most common nerve compression syndrome in peripheral nerve compression disease. Although potential ulnar nerve entrapment can occur at multiple points along its course, for example, the Arcade of Struthers, the medial intermuscular septum, the medial epicondyle, the cubital tunnel, and the deep flexor pronator aponeurosis, the most common site of entrapment is the cubital tunnel. The uncontrolled flexion of the hand, as flexors muscles become fibrotic and short.

A condition that involves pressure or stretching of the ulnar nerve which can cause numbness or tingling in the ring and small fingers, pain in the forearm, and/or weakness in the hand. These symptoms are often felt when the elbow is bent for an extended period of time, such as while holding a phone or while sleeping. Sometimes nerve testing (EMG/NCS) may be needed to see how much the nerve and muscle are being affected. The first treatment is to avoid actions that cause symptoms. Wrapping a pillow or towel loosely around the elbow or wearing a splint at night to keep the elbow from bending can help. Avoiding pressure on the “funny bone” can also help.

Historically, when (venous) blood-letting was practiced, the bicipital aponeurosis (the ceiling of the cubital fossa) was known as the "grace of God" tendon because it protected the more important contents of the fossa (i.e., the brachial artery and the median nerve). 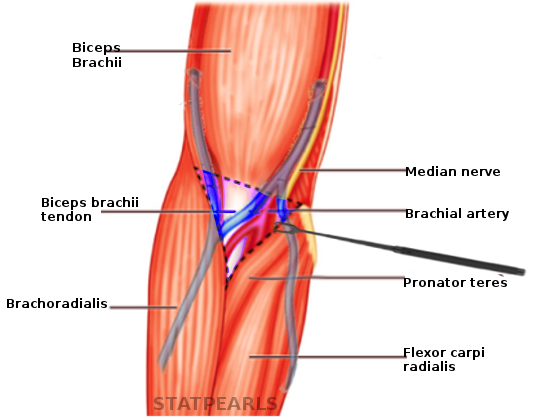