Peritoneal dialysis (PD) accounts for a small percentage (less than 7%) of the prevalent dialysis population in the United States compared to Canada (more than 50%). Better early survival on PD compared to hemodialysis (HD) has also been reported by several observational studies, including national registries from different parts of the world.  The cost of HD per patient per year remains significantly higher than for PD ($87,945 for HD versus $71,630 for PD in 2011). Patients have a choice when initiating dialysis to use HD or PD. Choice should be patient-centered and made after careful considerations of all factors that may alter outcomes. A large US cohort study of over 6000 matched pairs of dialysis patients beginning dialysis in 2003, showed that 1-year patient survival was significantly higher for PD when compared to HD (85.8% versus 80.7% (p < 0.01)). However, 80% of end-stage renal disease (ESRD) patients in the United States start hemodialysis (HD) with a tunneled hemodialysis catheter (TDC), and 60% continue to dialyze using an HDC for 91 days after dialysis initiation.  This initial catheter (modality) choice has had a major impact on the mortality of ESRD patients. Patient mortality in the first 90 days of HD as a result of catheter-associated bacteremia and sepsis from TDC use is higher when compared to patients initiating dialysis on PD.  A significant percentage of deaths in HD occurred within the first the 90 days on dialysis.[1][2]

PD is contraindicated in patients with:

Utilizing several different techniques, the success rate of PDC placement reported in literature varied from 80% to 100%. Are there any differences in catheter outcomes based on the technique used to place PDC? The answer to this question is difficult, as there are wide variations in patient and operator factors that cannot be controlled across populations. Overall, open surgical placement was associated with the highest number of complications, including poor function, leaks, and catheter migrations; there was a trend toward higher catheter survival after laparoscopic insertion. (See Table 1) Randomized control trial comparing fluoroscopic versus laparoscopic PDC placement included 113 patients showed a complication-free catheter survival that was significantly higher at 42.5% (95% CI 29.3 - 55.0) in the percutaneous group compared with 18.1% (95% CI 8.9 - 29.8) in the laparoscopic group (p = 0.03). One-year patient and catheter survival in the 2 groups was no different.

Both surgical and percutaneous procedures have low complication rates when performed by experienced operators. Obese patients who have had previous abdominal surgery or with previous episodes of PD-related peritonitis can benefit from advanced laparoscopic placement of the catheter. Surgical PD catheter implantation typically takes longer, including referral and consultation delays to a surgeon, operating room scheduling, and preoperative medical and anesthesia clearance. In contrast, nephrology-guided PD catheter placement can be performed relatively quickly, usually under procedure sedation analgesia in an outpatient setting. This is particularly useful in an acute emergent setting with a relatively short window of notice required before dialysis initiation.

Starting dialysis with a PDC is preferable to an HDC in terms of patient morbidity, mortality, and cost. It has also been shown in large observational retrospective studies that there is a survival advantage for PD over HD in the first 1 to 3 years of dialysis. The 2013 Annual Data Report from the United States Renal Data System also shows a significantly improved adjusted probability of 5-year survival with PD compared to HD. This early survival, for the most part, may be explained by selection bias because healthier patients may be more likely to choose PD as their modality. Patients with comorbid conditions tend to start HD after an acute illness and have high early mortality that is wrongly attributed to their HD modality.

Two recent studies from Canada tried to address the selection bias in PD outcomes. Quinn et al. studied 6573 patients who had at least 4 months of follow-up with nephrologists and had an elective outpatient start of dialysis. There was no difference in 2-year mortality between PD and HD, and in patients without diabetes, PD was associated with a survival benefit that extended beyond 2 years of follow-up. Similarly, Perl et al., comparing incident ESRD patients from a cohort of 40,000 patients in Canada, noted an 80% increased risk of death in patients starting HD using a central venous catheter (CVC) but no difference in mortality between PD and HD using AVF or arteriovenous graft (AVG) for dialysis.[4]

Peritoneal dialysis is one of the modalities utilized for dialysis. There are several advantages of PD versus HD. Patients using PD will not need to leave home every other day to get dialysis, rather they perform their treatments at home using a very simple principle for removing toxins from their body.

Patients selected for PD will undergo PD catheter placement using one of the several techniques described above. Once the catheter has healed, they undergo technique training at a dialysis unit for 2 to 3 weeks, learning the proper aseptic technique to use the catheter for dialysis. The basis of toxin removal in PD is diffusion of uremic toxins out of the blood through the peritoneal membrane into the peritoneal fluid, that is then discarded after a specified amount of time in the peritoneal cavity.[5]

The process of PD can be automated using a simple machine attached to peritoneal dialysis fluid bags. The machine is programmed to infuse the predetermined volume of fluid into the peritoneal cavity, dwell fluid in the peritoneal cavity for a specified time, and automatically drain the fluid. Cycles are repeated several times based on patients needs and peritoneal membrane diffusion characteristics. Manual exchanges require the installation and draining of fluid to be performed by the patient, repeating the process several times during the day to achieve the required clearance of toxins.

Infection of the peritoneal cavity is the most important complication that will not only increase the risk of PD failure but also potentially be life-threatening to the patient. The rate of PD infections can be lowered by proper technique and constant patient education to emphasize proper aseptic technique while using the PDC. Most infections will present with abdominal pain and cloudy peritoneal fluid and diagnosed by looking for white blood cells (WBCs) in the PD fluid. A cell count of more than 100 WBCs per mL of the fluid suggest an infection and should be promptly addressed per guidelines.[6]

PD offers autonomy and dialysis therapy in the comfort of patients home. Outcomes of patients are equivalent to those using HD as a dialysis modality, and it is considerably cheaper to the system. Patient education and utilization of a PD-first approach in all patients initiating dialysis can not only save financial resources in an evergrowing cost of ESRD care but improve patient experience and mortality.

PD offers autonomy, dialysis therapy in the comfort of patients home, outcomes of patients are equivalent to those using HD as a dialysis modality and is considerably cheaper to the system. Patient education and utilization of a PD first approach in all patients initiating dialysis can not only save financial resources in an evergrowing cost of ESRD care but improve patient experience and mortality. Despite these benefits, the utilization of PD remains poor in the United States. There are no RCTs comparing outcomes of PD versus HD, and such a study will perhaps never be done. USRDS data suggests the outcomes of PD and HD are equivalent and risk of death in ESRD patient initiating dialysis with TDC higher in the first year of dialysis compared to PD patient. 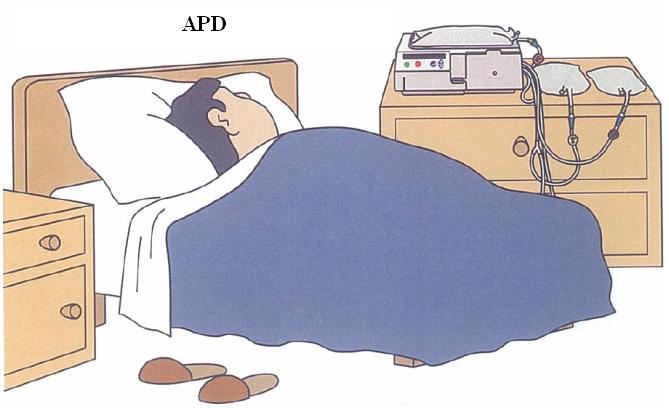